The 2014 Edmonton Ride For Dad used a closed runway at Canadian Forces Base Edmonton as the start/finish point. Large crowds are history as participants now Ride Alone Together.

I can’t think of any other two syllables that people hate to hear more than those two. It has been said that cancer, in all its variations, is so prevalent that it isn’t a matter of if you will be affected by it, but when. Since the year 2000, the Telus Ride For Dad has been working hard to raise awareness of prostate cancer as well as raising money for research into the disease.

The Telus Ride For Dad started out as an annual motorcycle ride and has grown to include All-Terrain Vehicle, Snowmobile, and Bicycle rides, plus Watercraft events from Coast to Coast. Over the 21 years the organization has operated, more than $36 Million Dollars has been raised for prostate cancer research plus awareness campaigns. A unique feature of the ride, and one that is definitely appealing from a fundraising point of view, is that all donated money remains in the community where it was raised.

My participation in the Telus Ride For Dad began in 2013 when Graeme Jones, former editor of Inside Motorcycles, and David Weber, Inside Motorcycles Publisher and a prostate cancer survivor himself, asked if I would participate in the Edmonton ride and provide a contrasting western perspective to Jones’s participation in the eastern, Niagara-on-the-Lake, event and our stories were featured in print (Jul/Aug 2013) and online. My schedule meant I actually had to ride in Calgary which provided the surreal experience of a leisurely trip through the middle of Calgary on the usually frenetic Deerfoot Trail, blocked off by the police for nothing but 637 motorcycles. 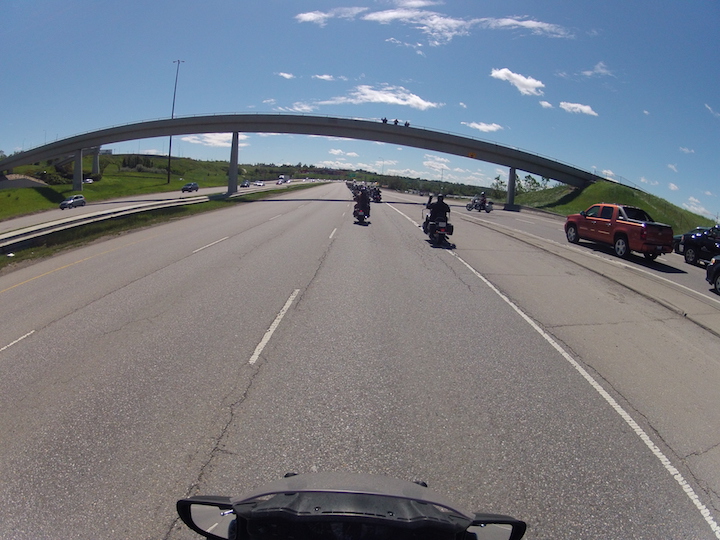 Between the two of us, Jones and I collected over $6,000 in donations for the cause that year and I have participated in the Edmonton event every year since. In 2018 my other riding adventures prevented me from joining the official ride, but family and friends still happily responded to my donation request with $1,600.

Being involved in the Ride For Dad also helped me learn a lot about friends and co-workers that I otherwise wouldn’t have been privy to. After receiving a donation I would always send a Thank You email and some of the stories that came back of how cancer had touched people’s lives really changed our interactions at the office and elsewhere.

The Captain’s Club recognizes those riders who make the effort to collect donations. A rider has to get at least $1,000 in donations to gain admission to The Club with membership advancing from Bronze through Silver and Gold before attaining three levels of Diamond and then three levels of Platinum. This is a cumulative amount so don’t feel pressured to get that your first year. The fundraising champions of the Telus Ride For Dad were given customized Captain’s Club flags for their bike on ride day along with patches and pins to wear with pride to advertise their dedication to eradicating this terrible disease. 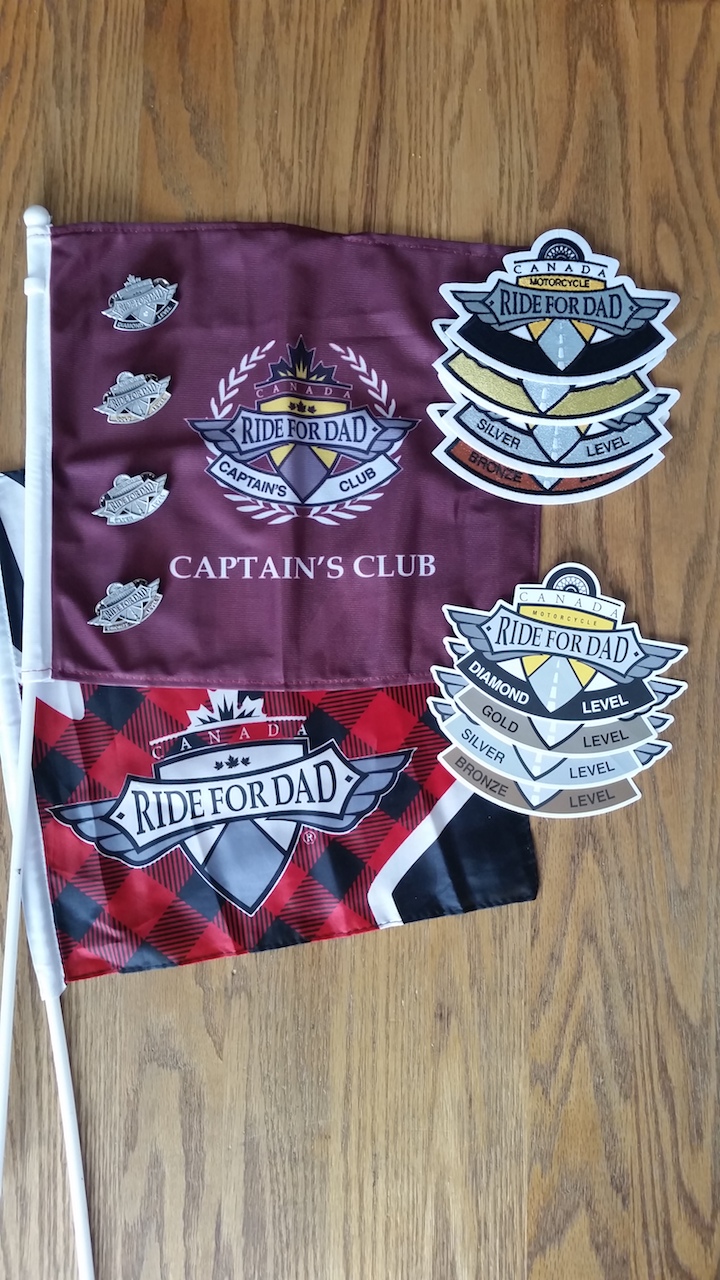 Everybody gets a flag. Captain’s Club members get a special flag, stickers, patches, and pins.

In addition to fundraising through donations, there are hundreds of logo items, from apparel to fridge magnets and BBQ sauces available for supporters to purchase in the online e-Store. There are numerous other ways to contribute to the Telus Ride For Dad including donating your old car. A big Thank You goes out to everyone who has donated over the years through all the possible options.

The COVID-19 pandemic has affected all aspects of our lives and the Telus Ride For Dad is no different with participation levels and donations dropping. In 2021, as they did in 2020, the Ride has become the Ride Alone Together event in which the large crowds and big group rides have given way to planned routes that you can do on your own. The one day event has also disappeared and you can get out and ride any time from May until October, depending on location. If it weren’t for the 2020 route options I wouldn’t have learned about the famous Len Thompson Fishing Lure, the World’s Largest, in Lacombe. I visited the World’s Largest Oil Lamp in Donalda, AB as part of my 420 KM ride in 2021 and witnessed a wonderful part of the Canadian Badlands that the town sits beside. 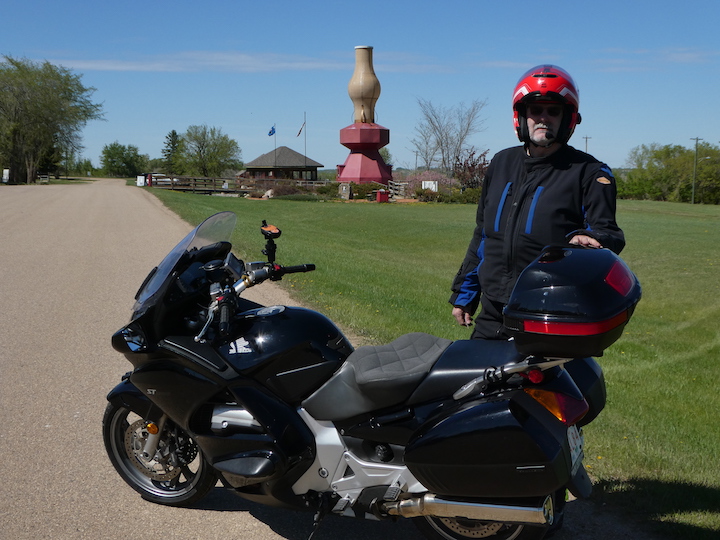 In addition to sitting beside some amazing Badlands scenery, the town of Donalda, AB is home to the World’s Largest Oil Lamp. 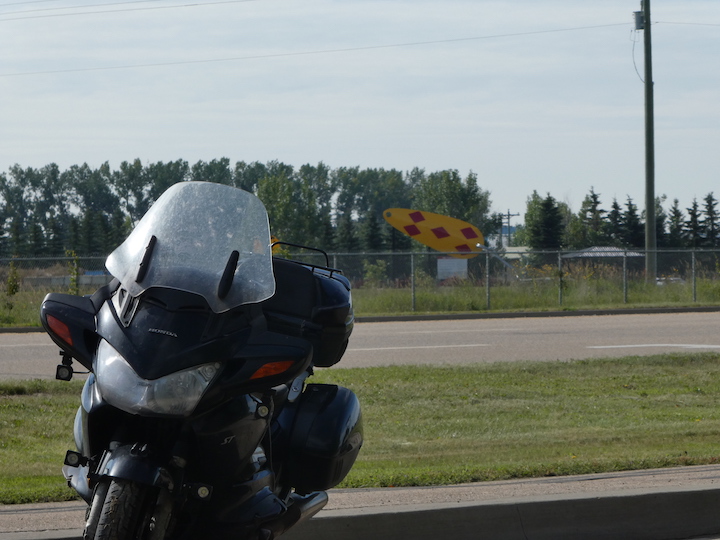 Modelled after the famous, locally made, Len Thompson Fishing Lure, the Five of Diamonds pattern is featured on the World’s Largest Fishing Lure in Lacombe, AB.

As mentioned at the top, cancer will eventually affect you or those you love. My mom beat breast cancer and colon cancer after which, being a man of a certain age, it was strongly recommended that I start having regular colonoscopies. Prostate cancer alone affects as many as 1 in 7 men in Canada. The disease can be beaten if it is detected early, but men often avoid seeing a doctor. Trust me, the simple blood test that could detect prostate cancer is nothing compared to the fill’n’flush screening for colon cancer.

Even mainstream entertainment has linked motorcycles and cancer. After being told he has Stage 4 cancer affecting multiple organs, Ben Tyler, a character played by Canadian actor Joshua Jackson in the 2008 movie One Week, responded with “Are you sure there hasn’t been some kind of mistake? I uhh, you know, I feel fine.” Tyler’s ‘feeling fine’ response is typical of many cancer patients and is one reason why early detection is so important. What was not typical was that Tyler then bought a motorcycle and rode across Canada to overcome his fear of the disease and sort things out about his life.

Despite all of my big riding adventures, one of the biggest rides I take very year, and you may discover the same thing, is the Telus Ride For Dad. So please, participate, in whatever format you prefer, or make a donation to help raise awareness and fund research to change how we hear cancer. Take that local ride, or go across Canada, before it’s too late. And don’t hesitate to get checked regularly so you can continue to ride your motorcycle (or other fun vehicle) and enjoy life. Until the research finds a way to prevent the disease, your best defence is early detection. Then, if your doctor ever tells you prostate cancer has been detected, you may hear those two syllables a little differently.

“Tell me doc, can I beat this cancer?”

If you are a participating, fundraising, rider, Thank You. If you know someone who rides, ask if they are participating and how you can donate. If you don’t know anyone and want to donate to my 2021 fundraising efforts please feel free to click this link and donate to this worthy cause – Bruce’s 2021 Ride For Dad.

Fundraise responsibly and enjoy your travels.