With all of the flooding and hardships in Calgary and area over the past week, we felt it was a good time to tell a good news story from the area. Read on to hear about R. Bruce Thomas’s experience at the Calgary Motorcycle Ride for Dad on the weekend of June 14-15…

I arrived in Calgary on June 14 in a downpour with the temperature at only 8C. After a quick bite I headed for the pre-ride registration at Deerfoot Mall.

Needless to say, with the cold wet weather, there wasn’t a lot of activity. I had pre-registered online and received a lot of e-donations but also had one cheque to hand in. It didn’t take long to get through the registration trailer, get my bag of goodies, and be ready for the ride. Registering online ahead of time is the preferred method as it lets the organizers know how much food to have available along with other supplies.

Once the rain stopped, more and more people began to arrive. Steve Adair, Co-Chair for the Calgary Ride For Dad Chapter, said that having too many people was a good problem to have.

I sort of understand how the weather keeps some people away. There were a number of people who came to Friday registration in their cages as they had already shined and polished their bikes and didn’t want to have to do that again Saturday morning. I pointed out that the rain had washed all the bugs off my bike on the way down from Edmonton but that concept seemed foreign. I had heard of something called The Man Van that was going to be out on Saturday and wondered if it was to haul around all these fair-weather riders. That thought couldn’t have been further from the truth. 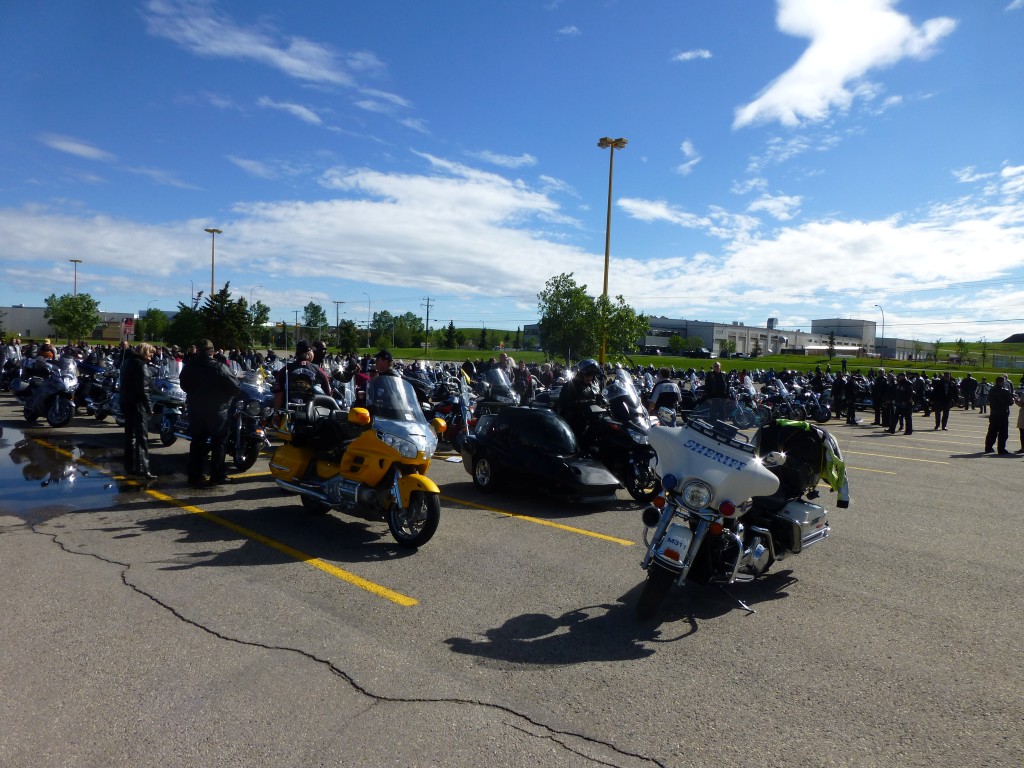 A city record 637 riders signed up for the 2013 Calgary Motorcycle Ride for Dad on June 15.

Saturday morning was again a rush of late registrants and Ryan King, Ride For Dad Secretary, was having a hard time getting a rough idea of the number of bikes as this was a different start location from previous years and his eyes weren’t calibrated to the different size/shape of the parking lot. When all was said and done, 2013 set a record for the Calgary Ride For Dad with 637 bikes.

The Police-escorted Parade Route took us 30 KM down Deerfoot Trail – Calgary’s major North-South freeway – and, with the Calgary Police doing a fine job of blocking all other traffic, it was almost a little freaky to be able to relax and just ride along and not worry about the usual participants in the ‘Deerfoot 500’ (the local nickname arose due to the excessive speed and erratic behaviour so many people exhibit while driving on this road). 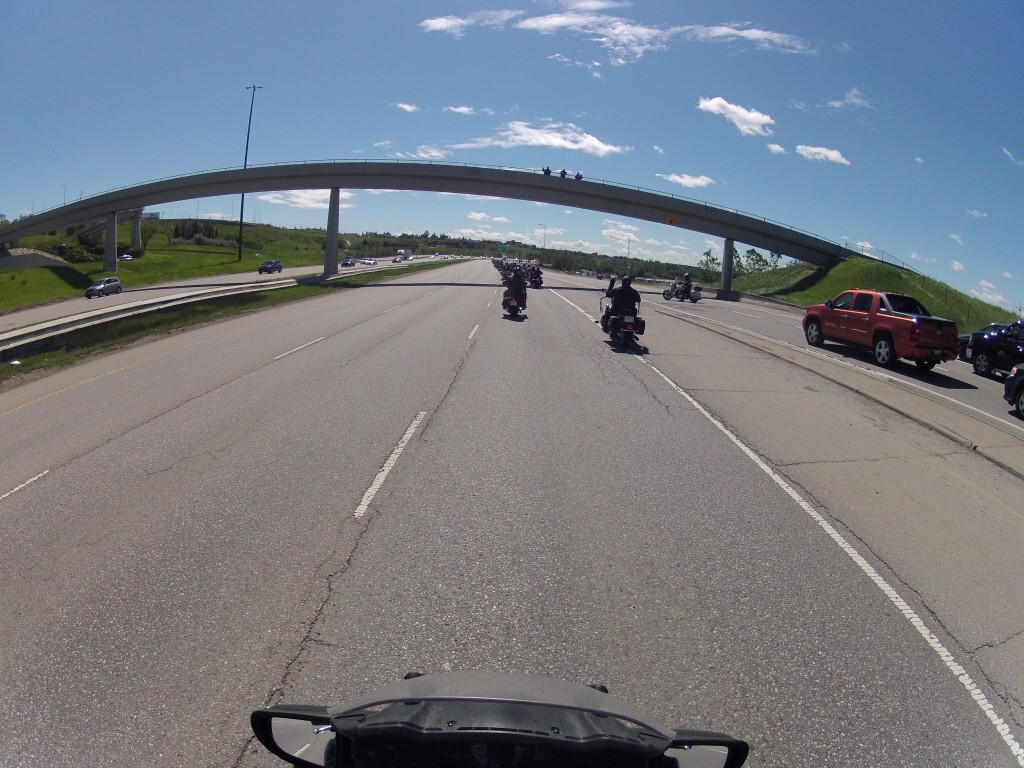 Police block an on-ramp to Deerfoot Trail as the Parade Route winds along the busy stretch of city highway.

The Ride broke up into smaller groups at the end of the Parade Route. There were a lot of clubs who headed off together and individual riders, like myself, either tagged along with others or headed out on our own. I had a few photo-op locations picked out so ended up riding with different groups as the day went along.

As much as my wife and I have ridden around Southern Alberta there were things on the ride that I had never seen. The Okotoks Erratic (Big Rock) is thought to have been hauled down from Jasper by Glaciers thousands of years ago. It’s a big rock! And we usually take the fun route along Secondary Highway 762 but Highway 22 is entertaining enough in its own right (and darned scenic as well.) 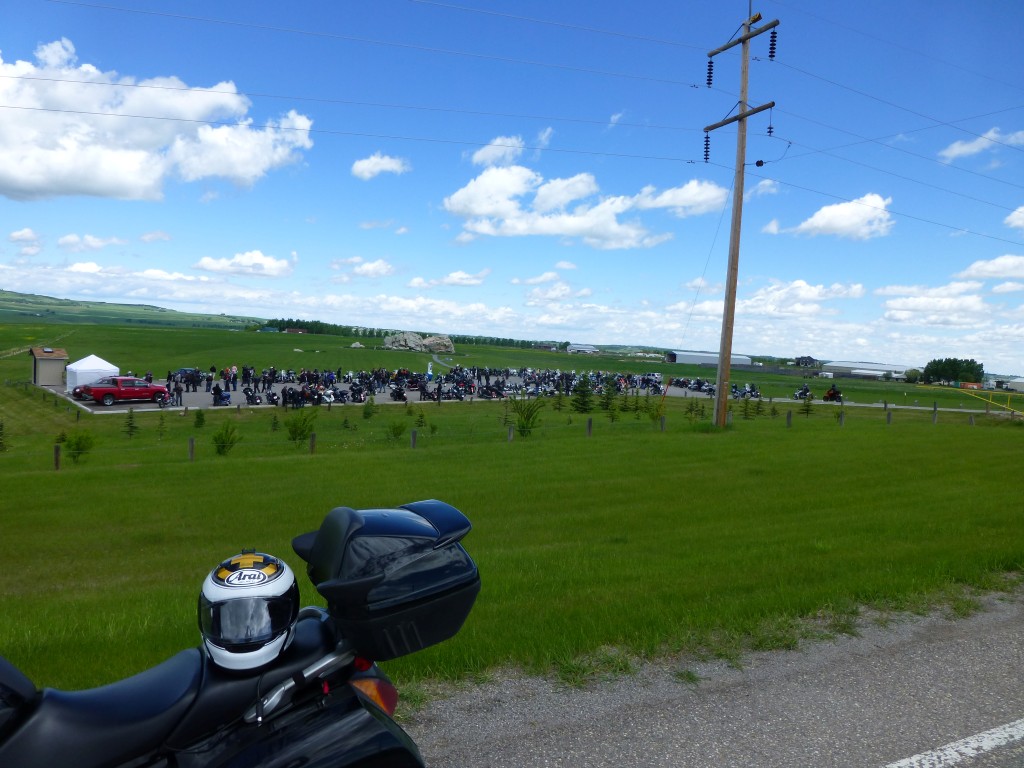 While it’s hard to see in this photo, the Okotoks Erratic provided a stunning backdrop for one of the ride stops.

Riders had a stop in Bragg Creek for their fourth Poker Card before reaching the end of the ride at Springbank Park where there was live entertainment and a BBQ and prize draws and auctions. Amanda Higgs was introduced as the top donation earner with $10,000, and a preliminary total of $106,000 was announced for all riders. Taking into account the numerous corporate sponsors, the Calgary Ride For Dad usually turns over 103% of rider donations for research and awareness – simply amazing!

I had received $3600 in donations which included the $1000 matching amount from Inside Motorcycles. Thank you to all my family, friends, and co-workers for responding in such a resounding fashion to my emails.

And amazingly, the weather had turned out to be wonderful on Saturday.

Which brings me back to The Man Van. 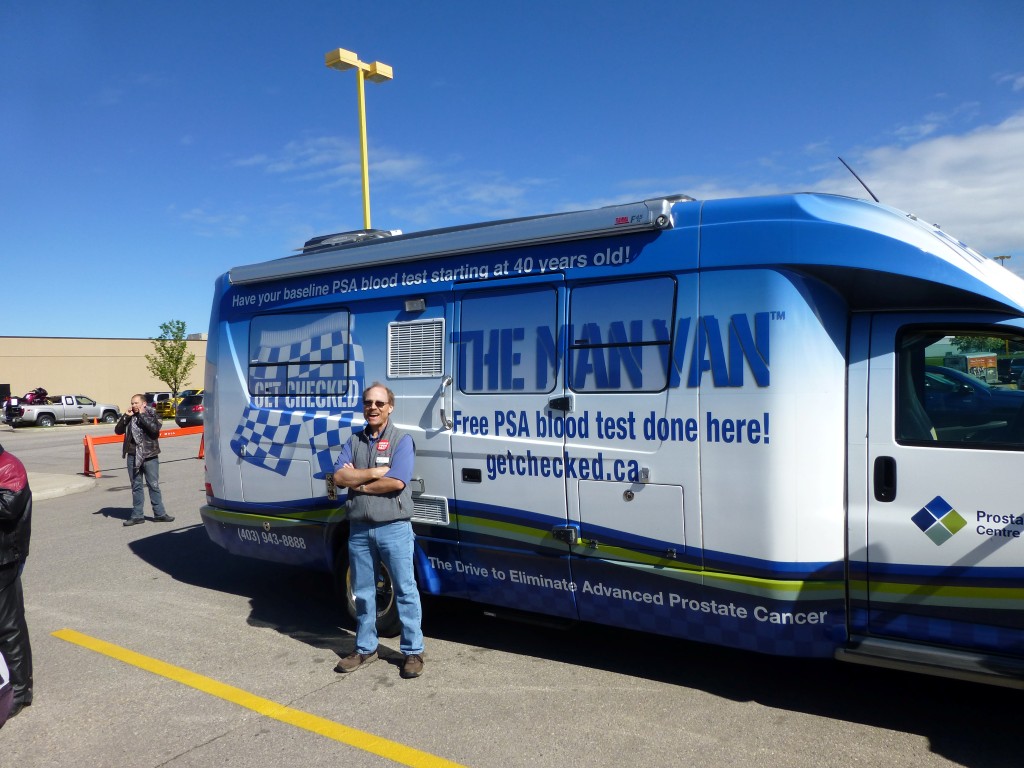 The Man Van is a mobile PSA screening vehicle that Calgarians are fortunate to have.

When I saw it in the parking lot on Saturday morning I went over and asked the driver what he would do now that he didn’t have to play chauffeur for all the fair-weather riders. John explained that The Man Van is actually a mobile PSA Screening Vehicle (getchecked.ca) and that there would be two nurses in the vehicle at the end of the ride to take blood samples and start the baseline/screening process for Prostate Cancer.  He must have sensed my Scottish heritage because he continued on to tell me the test was FREE! And they drive around to where people are. You don’t even have to go out of your way.

I talked to so many wonderful people on the weekend and heard so many stories that the experience was almost overwhelming. Luckily, our eldest daughter lives in Calgary and I was spending the weekend at her house and that helped keep things in perspective. Saturday dinner with her in-laws and a nice brunch on Father’s Day. If those experiences don’t make a person want to take care of their health I don’t know what will.

So get checked. It’s really a couple of simple procedures. Yes, both the Digital Rectal Exam and the PSA Blood Test.

And watch for the next issue of Inside Motorcycles for a fresh recap of both the Niagara and Calgary Rides for Dad! 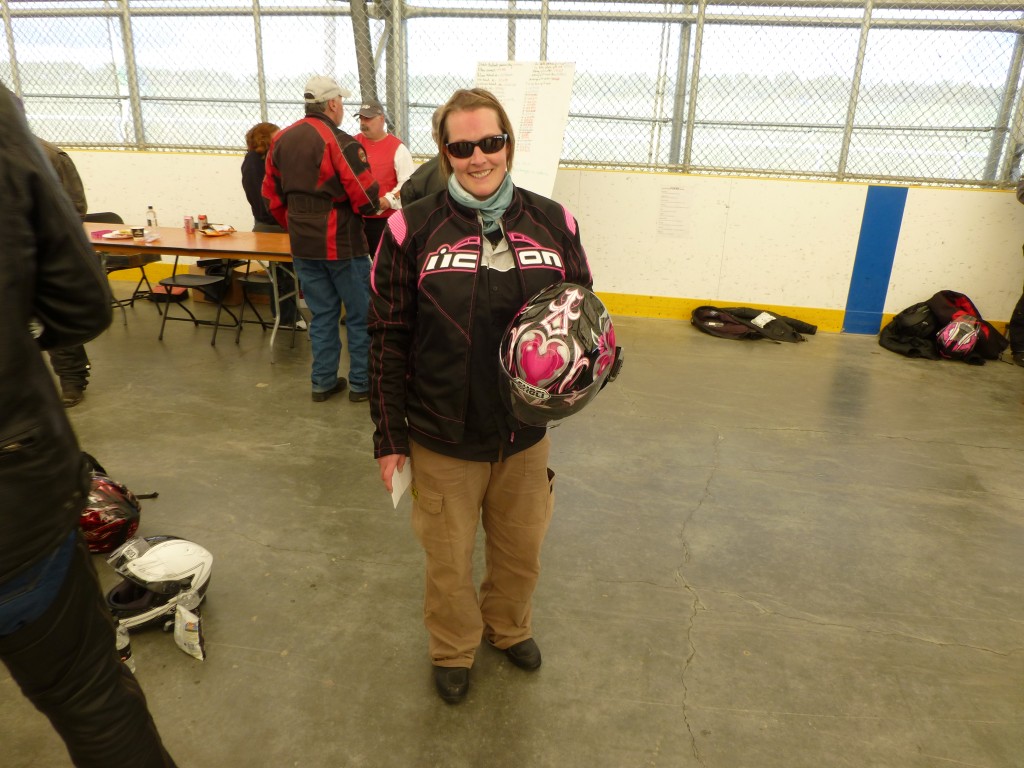