This race was a demo for the works, Spain-based Kawasaki Racing Team, with the 34-year-old Rea and his Ninja team-mate Alex Lowes pulling away from the start.

It was demoralizing for the rest of the 24 bike-strong field since Rea has dominated the street bike-based tour since he left Honda to join Kawasaki in 2015.

Rea has now won six titles in a row and seems well-placed to earn crown number seven. Still, in racing there are no givens, as the rest of the weekend revealed.

Behind Rea and Lowes in the opener, the best challengers were Scott Redding on the Aruba.It Racing factory Ducati, the works Pata Yamaha of Toprak Razgatlioglu and the satellite GoEleven Ducati of former factory man Chaz Davies.

Lowes slowed mid-race and was picked off by lowly qualifier Razgatlioglu and Davies, who had opted for a softer spec Pirelli tire option.

Late in the race, Lowes got back to second, but the fight was truly on: Davies and Razgatlioglu were right there in the battle for the last podium slots, now joined by Redding and the factory Honda of Alvaro Bautista.

Lowes held off Razgatlioglu on the run to the line, with Redding fourth and Davies fifth. 2019 Ducati almost-Champ Bautista crashed late.

Sunday morning’s second race, the shorter Tissot SuperPole ten lapper, ran in much cooler weather conditions, with a damp but not really wet track surface. Redding got the hole shot at the start, but soon ran wide on the slippery surface letting Rea take the point.

Redding and Rea then pulled clear in company with Lowes. Rea and Lowes had started with Pirellis revised Intermediate tire, and eventually got ahead to take another one-two, Rea’s 101st win and the 160th for the Kawasaki brand in the series.

Struggling on full wets, Redding faded to a discourage eighth, but learned some lessons he would soon apply in Race 3. The satellite GRT Yamaha of American Garrett Gerloff worked his way up to an impressive third, working past top Ducati racer Davies who claimed fourth in the “Q” race.

Opting to start with slicks on a drying track, Michael van der Mark was quickest late in the race aboard the works BMW, almost getting Davies on the way to fifth. 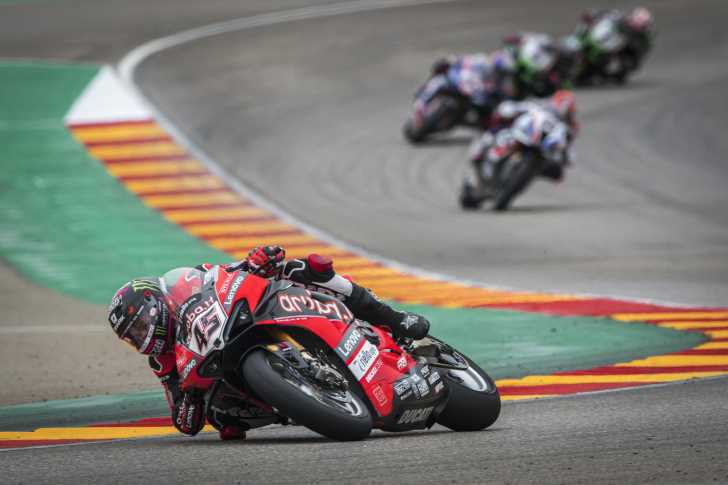 In the last race of the program, a drying track would once again make tire choice crucial. Redding opted to move to slicks after the sighting lap, while most of the other likely winners choosing “Inters.”

Initially, Rea and Lowes lead from Gerloff and van der Mark, and then Razgatlioglu pushed from fifth to lead on lap five of eighteen.

However, the big move of the race had already taken place – an overly ambitious Gerloff dive-bombed Rea into the Corkscrew section, forcing Rea to Motocross through the gravel.

Gerloff fell almost under the inside of Rea’s Ninja, but remounted in 13th position. Rea, meanwhile, made sure to give up ground to avoid a penalty for gaining an advantage, and resumed just behind the leaders in fifth.

Redding took control on Lap 6, pulling clear for a solid victory. Rea carefully worked his way back to second, under solid pressure from Lowes, who netted third – a perfect run of Podiums at the opener.

Hardest charger was BMW Team leader Tom Sykes, who worked his way through from a distant mid-field spot to earn fourth, right with the battle for second. Van der Mark faded to fifth, while Davies crashed on the opening lap. Razgatlioglu earned sixth.

Gerloff remounted to make his own charge, including an in-race “long lap” penalty for his collision with Rea. The former MotoAmerica Champ made it to seventh and earned points for heading straight to the Podium to apologize to an accepting Rea.

“I took a big risk,” admitted winner Redding of his tire choice, at the Rostrum. “In my career, however, the intermediate tires have betrayed me twice, both times when I was close to a great result. So, I decided to ask for slicks. Early, I just tried not to make any mistakes, and then it wasn’t too difficult to take the lead.”

CUTLINE: Rea took a gamble on his his choice of rubber and it paid off. Credit: Kawasaki Racing Team

Rea was relaxed post race; happy he didn’t go down in the incident with Gerloff. “I’m content with the weekend because to win that first race of the season was 100 times better than last year, and also to claim that 100th victory was a real target of mine.

“I haven’t experience conditions like today’s in my whole career,” confirmed points leader Rea. “It really was a big tire choice gamble by the minute! The SuperPole race was the first time I had ever raced on the intermediate tires so huge kudos to Pirelli. I decided after that experience to go with that choice for the final. It weas the safest option, but it wasn’t the right one!”

Lowes explained that “after two laps the line was completely dry, so we had no chance of keeping with Redding. Still, I felt good with the bike and I played a bit with some settings (Electronics) to find a bit more grip. Tis morning I felt good in the full wet conditions, and in the dry we were good too. In the mixed conditions, we did a good job, and that puts us in a good position going forward.”