by Wally Nesbitt
in Reports, Results and Points
0

(Bushell Park, Saskatchewan, Canada) During the month of July, the Pacific Coast Mini Roadracing Club (PCMRC) hosted Rounds 2 & 3 of the Canadian Motorcycle Association National Mini Roadracing Championship series at the Greg Moore Raceway in Chilliwack, BC, as well as Rounds 4 & 5 at the Caribou Raceway Park in Quesnel, BC.

The Finn Motorsports team made the annual 3700km trek to British Columbia to race at two of the most immaculate and dynamic tracks in all of Canada. The team would find themselves battling not only their respective competition but also some of the wettest conditions ever faced in national competition.

Finn Motorsports Youth Class rider, Matthew Finn, was looking at capitalizing on his strong starts off the line and to keep in the fight in the national points race.

Able to get the hole shot almost every race, Matthew would lead the entire field for the first laps of the race but was unable to fight off charges from behind. Through it all, Matthew earned third and fourth place finishes for the twin rounds in Chilliwack.

The following weekend for Rounds 4 & 5 in Quesnel, would be bitter sweet for the eight year-old Youth racer. 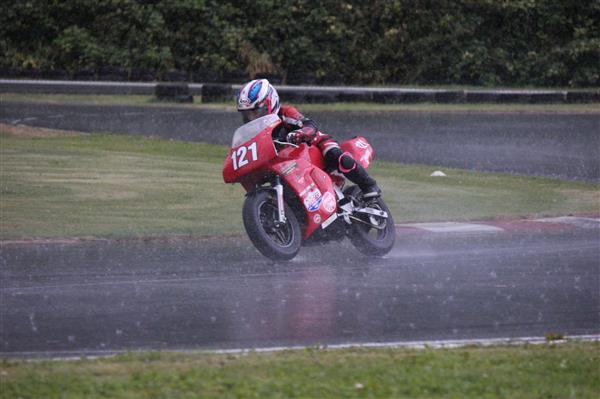 Continuing to dominate off the starting line, Matthew fought hard, even physically pushing his bike down the front straight and across the line on the last lap after throwing a chain.  But even with all his efforts he would settle just off the podium with two fourth place finishes keeping him within reach of the national points leaders heading into the following rounds.

The ten year old proved that he would fight it out with the adult and teenaged veterans earning his place as a front-runner. Evidence of this came as Jonathan was part of the closest finish in National competition just missing out of a second place finish by 2/100s.  Entered in five different classes on two different race bikes, Jonathan competed in 20 races during the four west coast national rounds, finishing on the podium ten times with 1 National Win, four runner-up finishes, five third places finishes and finishing within the Top 5 four times.

The Finn Motorsports team will return to Saskatchewan with good momentum heading in to the second half of the Canadian Motorcycle Association National Mini Roadracing Championship series.