by Colin Fraser
in News
0

MV Agusta has an enviable reputation for building bikes that are true to the company’s hardcore, pure sport bike roots.

Even its naked Brutale model series is racer-sharp in focus, a trend that several other manufacturers, especially Ducati and KTM, have lately followed.

However we wondered about the abilities of the brand new Turismo Veloce 800 Lusso, a MV triple with a sport touring setup and a sport bike appearance.  Would this MV be versatile enough to cover long distances over a day, and not just short distances in haste with added luggage?

According to MV Agusta specs, this MV shares a crankshaft, rods, cases, rear hub and a few odds and ends with other triples in the family.  The beefy, open trellis frame looks familiar, as does the attractive single-sided alloy swingarm.

But the two-stage tail section is much different, with the ability to handle a full size passenger and specific (and fairly large) dedicated saddlebags.  Although the bags do not protrude too much, no wider than the handlebars, they offer a total of 60 litres of oddly-shaped storage. 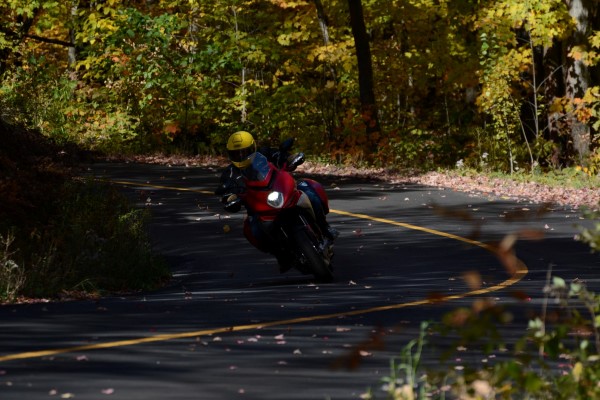 Our just-arrived test unit came with these bags, the bike finished in a classic two-tone metallic silver and red racing paint job.  The Lusso part of the package adds electronically controlled (via the very efficient and easy to read new dash) Sachs suspension as well as MV’s MVCSC chassis stability-control system, plus heated grips and a centre stand.  There is even a very trick folding handle that helps you raise the fairly tall Turismo Veloce onto its main stand.

The triple’s engine was tweaked to improve low and mid-range performance, and also increase the service intervals to a reasonable 15,000 km.  The three exhausts still howl, but now the bike makes solid power all through the rev range, building output in a steady and impressive manner until the twin flashing lights atop the dash suggest you should shift, right around 11,000 rpm. MV Agusta claims that this version of their 798 cc engine produces 110 horsepower at the crank, and in a surprise given some recent launches, I have no reason to doubt the claim.  The Turismo Veloce certainly seems more powerful than anything in the class short of a newer Kawasaki Ninja 636. Unlike some MV Agustas that I have ridden in the past few years, the fuelilng is impressive, with no stumbling off idle and no weird glitches anywhere in the rev range. Handling is solid, the chassis stiff and the various ride modes aimed towards racetrack-type suspension control.  The MV has a good looking, fairly comfy seat, but the riding position makes for an unusual high seating with a relatively tight leg setup.

Our brief sample of the Turismo Veloce only allowed about 1,000 km of travel, but we think that you could, in conservative ‘Touring’ ECU mode, get close to 400 km from a 22 litre tank of fuel.   This is sport touring with the emphasis on the former; but also by far the most versatile, while still fast and fun, MV produced – so far.

The Canadian Motorcycle Association has designated Sunday, October 18th as the 6th Annual Day of Remembrance

The Canadian Motorcycle Association has designated Sunday, October 18th as the 6th Annual Day of Remembrance