The Vallee Report – Meeting the Warhawk

Many times in this space I have spoken about the freedom that two wheels and the open road provide. Nothing compares to a beautiful summer evening, a twisty road just ahead, and the roar from your bike as you twist the throttle just a bit more. Of course the freedom experienced on your bike would not be possible without the sacrifices of others as they fought in defence of our nation. Every November 11th we observe Remembrance Day to honour those who have served as well as those who continue to serve to this day. This year when attending the ceremony in Waterloo something happened to catch my eye as it rolled into the parking lot adjacent to the cenotaph. That something just happened to be a gentleman named Skip Lafreniere as he pulled his one of a kind Victory into a parking spot. 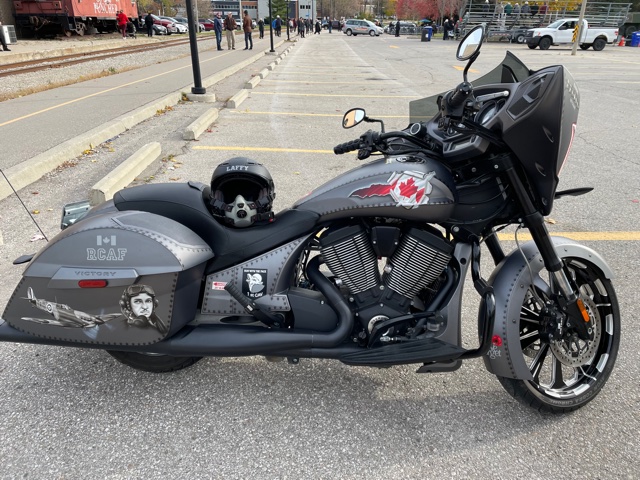 Lafreniere, a veteran himself, joined the forces out of high school as a radar technician before switching over to instrument and electrical maintenance on aircrafts. This experience helped pave the way to a 36 year career with Bell Canada and then a switch to NorthwesTel in 2005 for another 13 years. Along the way, Lafreniere was given the prestige of becoming senior project manager for Olympic Broadcast Services Vancouver at the 2010 Olympics. In 2018 Lafreniere said goodbye to the high tech world and retired to Waterloo to be closer to his four grandkids and to spend more time cruising the highways on his beloved Victory.

A lifelong biker, Lafreniere has owned many brands since getting his license in 1966. “My first bike was a Honda 175 that I used to travel back and forth to the base in Clinton where I was stationed. Through the years I have owned a number of bike brands including Honda, Yamaha, Matchless, Triumph, Harley-Davidson and of course my latest love my Victory Cross Country X1 Magnum. Of all the bikes I have owned over the years this one is by far my favourite and I am happy to say it has been virtually bulletproof since I purchased it in 2016.”

When he purchased his latest machine, Lafreniere knew he wanted something a little different to honour both past as well as present air force flyers, so almost immediately he turned to good friend and renowned artist Frank Cipra (yes the guy who paints many of the goalie masks you see in the NHL). “I had some ideas and I shared them with Frank. I gave him the parameters of combining old and new with the Spitfire and the F18 as well as the flying tigers and teeth that were on the P40 Warhawks that fought in China. I guess you could say the rest was a blank canvas for him. After about four months Frank sent me pictures of what he had done with the exception of the picture of John Belushi on the front. When I finally saw it, that picture was a complete surprise and I was blown away. He absolutely knocked it out of the park.” 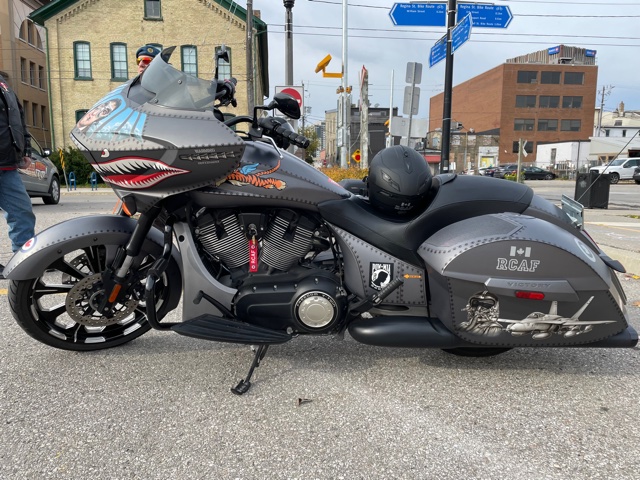 Along with the spectacular artwork that adorns his bike, Lafreniere has done a few other mods to his machine as well including new pipes and a racing cam. A trip to the Dyno proved the mods were well worth it and Lafreniere beams as he talks about the improved performance. “The difference was like night and day. The printout showed a 7 horsepower increase and the torque had improved substantially as well. The bike is a rocket and the pull it gives in gears 2 through 5 is incredible.”

A member of CAV (Canadian Army Veterans Motorcycle Group) since 2010, Lafreniere now holds the title of Sargeant at Arms of the Gulf-Kuwait group in Waterloo. Along with riding regularly with the group that also includes police, firefighters and first responders, the CAV also does its share to help those in need. “We do our best to help those who are less fortunate by organizing coat drives and such. We also provide aid to vets suffering from PTSD by contributing to the NSD for training of service dogs. I have to say that in the 54 years I have been riding, the last 10 have been the best with the CAV.”

People stop Lafreniere all the time and ask him about the bike and the artist and in 2018 the bike, now given the name “Warhawk,” even took the top bagger award at the Toronto Motorcycle Show. Make no mistake however, Warhawk is not just a show bike. “There may be another bike in my future but I think this one is for keeps. I will keep putting the miles on it and one day it will be given to my oldest son who rides as well.”