Kawasaki has given the Versys-X 300 somewhat of an identity crisis. The all-new 2017 model is positioned as a street bike, and is listed as such on Kawasaki’s Canadian website. But then there are the dirt-leaning dual sport looks, and the marketing imagery of the bike being ridden in the dirt and splashing through mud. You’d be forgiven for being as perplexed as I was about who exactly this motorcycle is intended for. 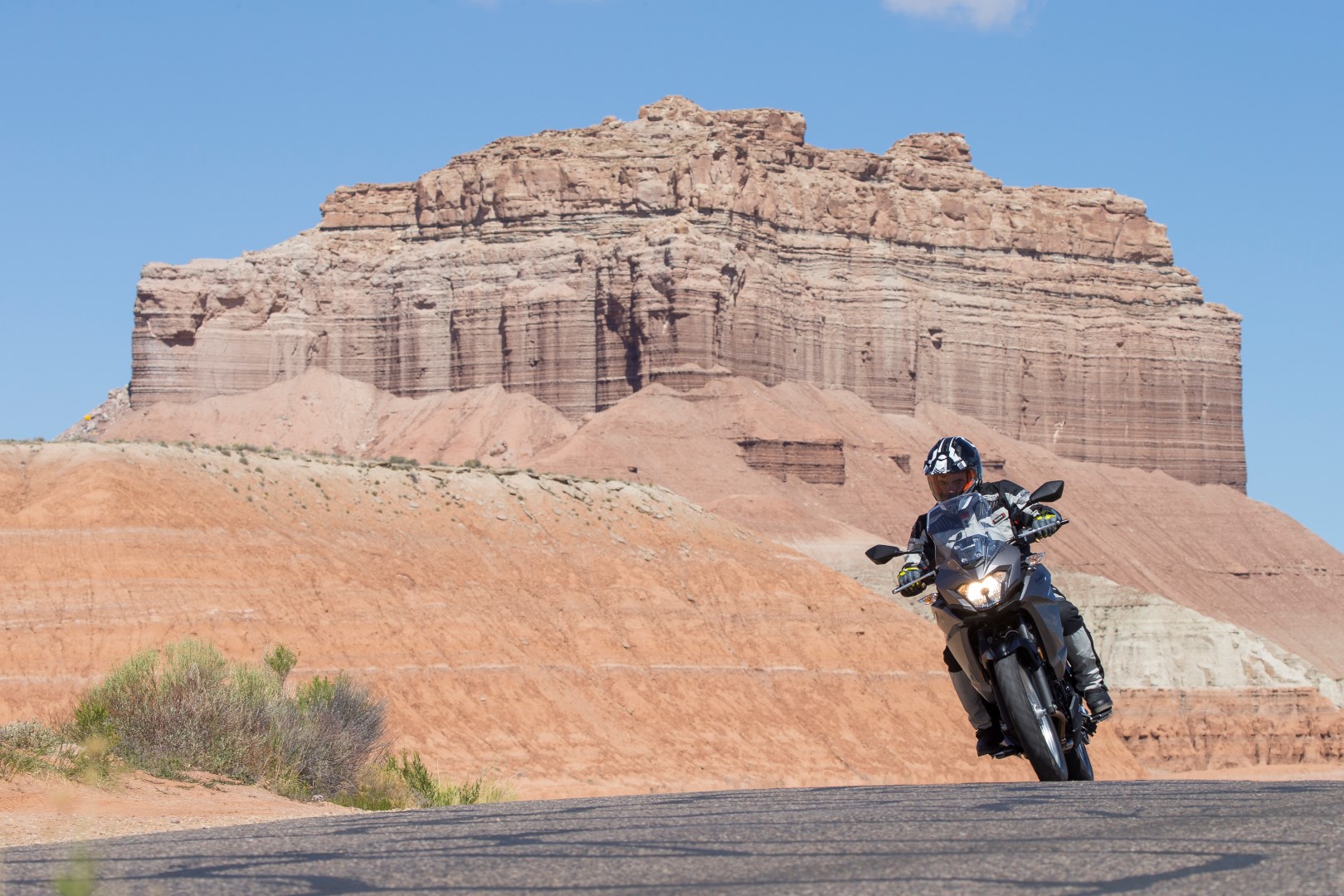 After spending two days riding the Versys-X 300 around Utah, I’m a lot more certain about what the bike can do (which is lots, it turns out), but I’m still somewhat unsure that there is a target buyer. Kawasaki’s marketing machine is certainly focusing on entry-level and intermediate city riders – no surprise given it’s a small-displacement bike – but the global press ride consisted of two days of mostly open-road highway riding. And then there’s the bike’s true dirt capabilities, which we discovered during a stint of serious adventure riding in Utah’s back country.

The conclusion I came to is that the Versys-X 300 lives up to its name, standing for versatility, but on a level above the existing Versys 650 and 1000 models in Kawasaki’s lineup. 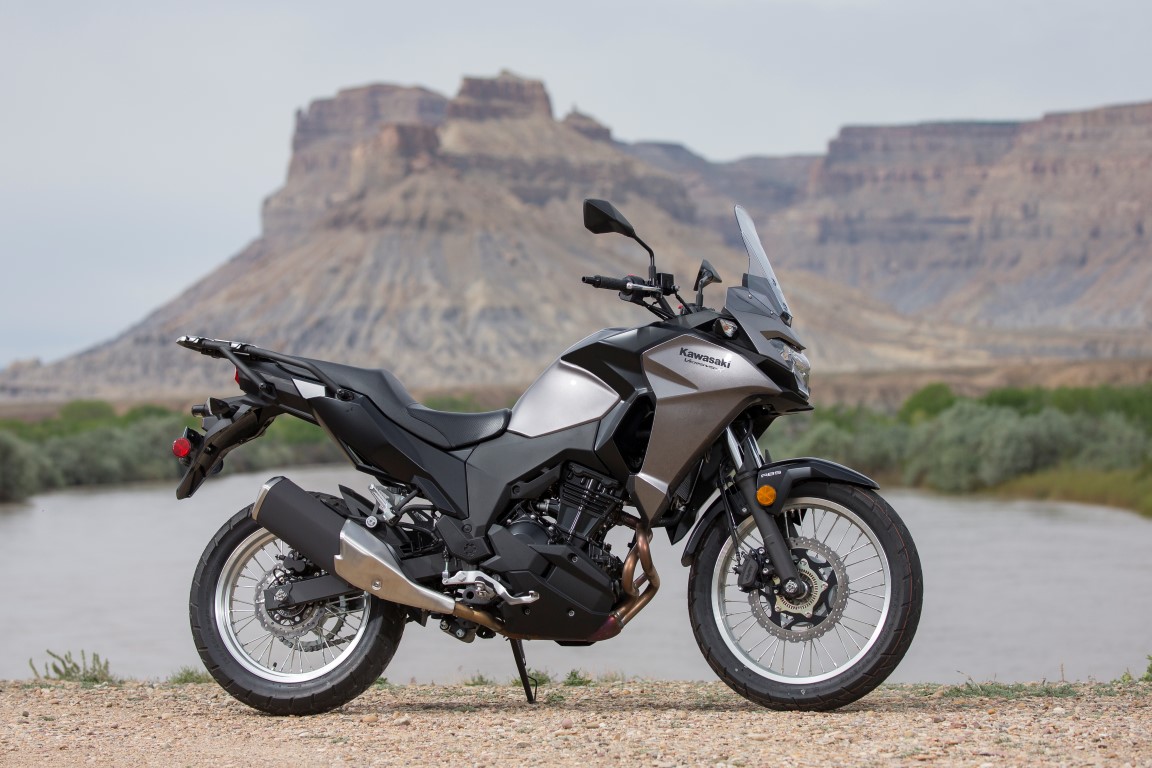 Power comes from the same 296 cc inline twin that powers the Ninja 300, with a revised airbox and exhaust system. It’s surprisingly practical on the open road for a 300, happily cruising at 100 km/h and not complaining even at 130 km/h and above (some of Utah’s freeways have 80 mph speed limits). There’s very little buzz generated through the frame at highway speeds despite the fact that the engine is spinning at over 8,000 rpm. Compared to a single, the smoothness of a twin makes it much easier to live with if your riding includes a lot of highway use.

Adding to the surprising long-distance capabilities of the 300 are a comfortable and relaxed riding position with plenty of room (even the tallest rider in our group had no complaints). The windscreen is perfectly located, deflecting air but sitting below the field of vision. We all saw 60-64 mpg (3.62-3.92 L/100 km) on the digital dash, and when you combine that with the pretty substantial 17-litre tank, you should theoretically get over 400 km from a full tank of gas. It comes with a standard luggage rack, too. 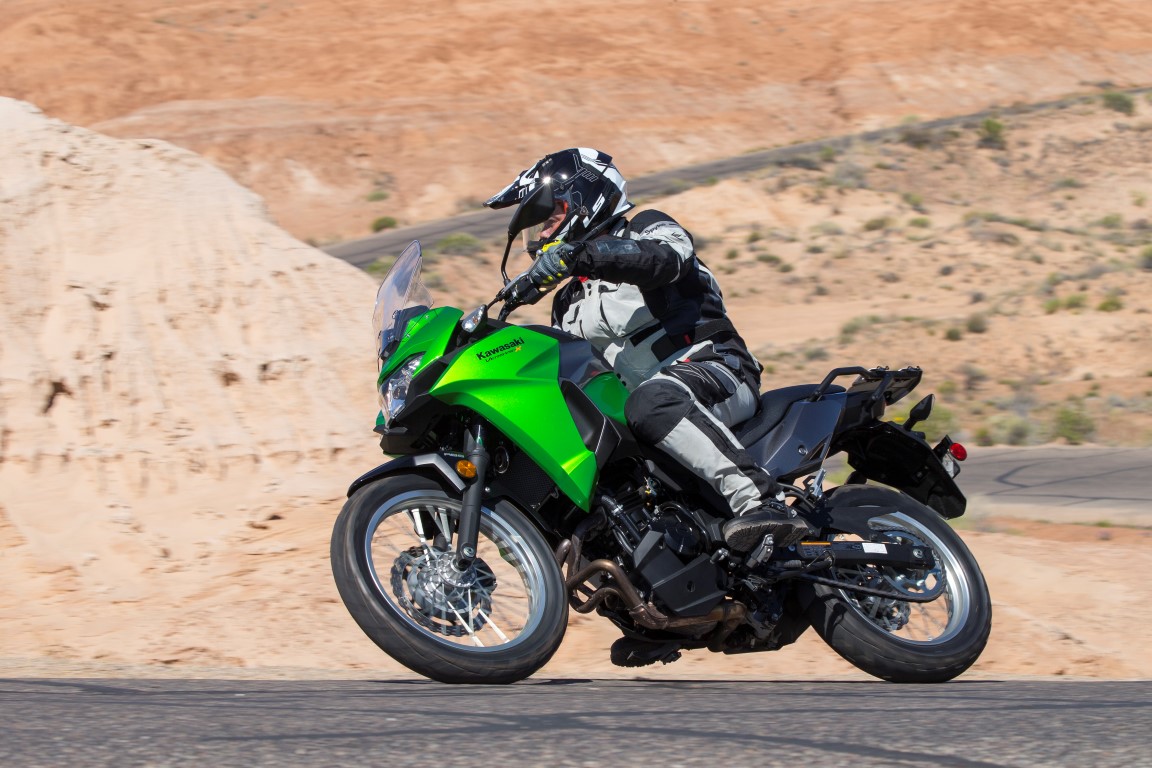 In town, the Versys-X makes a great city bike with adventure/dual sport style. The biggest highlight is the lightweight clutch lever. It’s almost shocking how easy it is to pull in, making heavy traffic much less tiresome. The seat is narrow, making the reach to the ground easier than the 815 mm seat height implies, but be forewarned: the seat is hard and becomes quite biting after a few heavy days in the saddle. Fuelling is really on the mark with this bike, making it smooth and easy to handle whether navigating downtown or breaking out of freeway traffic.

And that brings us to the dirt. Kawasaki really doesn’t position the Versys-X 300 as a dual sport bike, and it comes with pure street tires, but our route through Utah included some rugged, rocky back roads and a bit of real, stand-on-the-pegs off-road riding. The 300 took it all without showing any flaws or significant limitations. The suspension (with 130 mm front and 148 mm rear travel) soaks up significant rocks at speed, while the tall handlebar allows for control and comfort, even when standing. 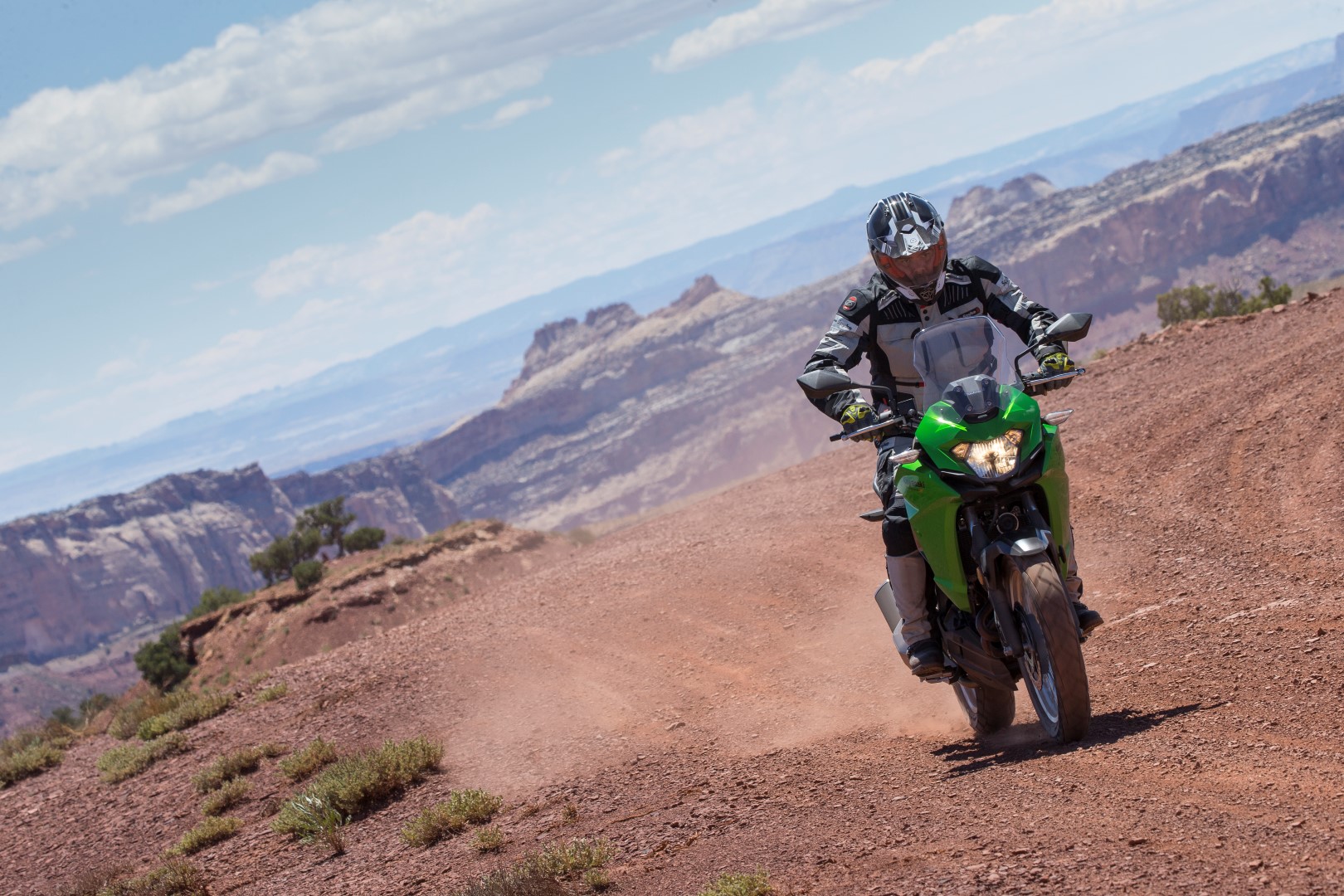 When you sum it all up, what you’ve got here is a motorcycle that is one of the most versatile on the market today. Unlike bigger adventure bikes, it’s easy to get along with in the city. Unlike many of your current scramblers that don’t have the specs to play in the dirt, the Versys can do it. And unlike a lot of 250-300 cc single-cylinder offerings, the two-cylinder engine makes highway riding tolerable. It rings in at $6,399, and at that price you’re getting a bike that you can do a lot with. The Versys-X 300 slogan, “Any road, any time,” is actually pretty spot-on here. The bike’s in showrooms now, so go sort out a demo ride!

Subscribe to Inside Motorcycles today for the full review including a more detailed analysis and more stunning imagery from Utah!

On a side note, riding in Utah is an experience that everyone needs to have at some point in their lives. The whole state’s like one big state park, full of stunning landscapes everywhere you turn. Whether you’re a touring rider or adventure/off-road rider, Utah is a playground.

Ganaraska 250 vintage ride returns on May 28!