Inside impression: Track testing the 2017 Aprilia RSV4 & Tuono at COTA

by Steve Hoffarth
in Feature Stories
0

The RSV4 RF Factory model (pictured) is the highest-spec Aprilia you can buy.

This was the exact scenario for me a couple of weeks ago at Circuit of the Americas (COTA) in Austin, Texas, where a day of watching the MotoGP entourage at the Grand Prix of the Americas was followed by a track press test of the new 2017 Aprilia RSV4 superbike and its naked sibling, the Tuono V4 1100. 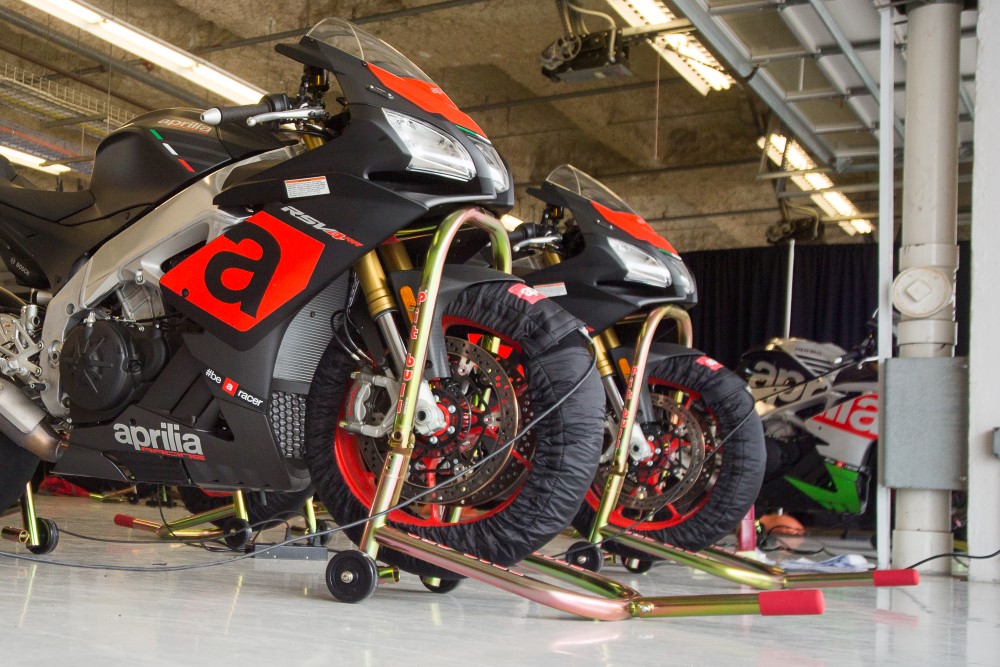 The RSV4 RR looks slick in flat black. All Aprilia and Tuono models are powered by a 1,077 cc V-Four.

Our day of track testing included the RF (factory) and RR versions of both models. The RSV4 is a full-on race-derived superbike, while the Tuono is of the streetfighter variety, with less bodywork and reduced horsepower (173 hp compared to a claimed 201 for the RSV4). The RF version of both models comes with upgraded Öhlins suspension components and an Öhlins steering damper, and the RSV4 RF also comes with an upgrade to forged aluminum wheels. All four bikes share ride-by-wire throttle and three riding modes as well as the APRC (Aprilia Performance Ride Control) electronics suite which includes traction control, wheelie control, launch control, a quick shifter, pit limiter and cornering ABS, all of which are independently adjustable and selectable.

So, how does it perform in the real world? 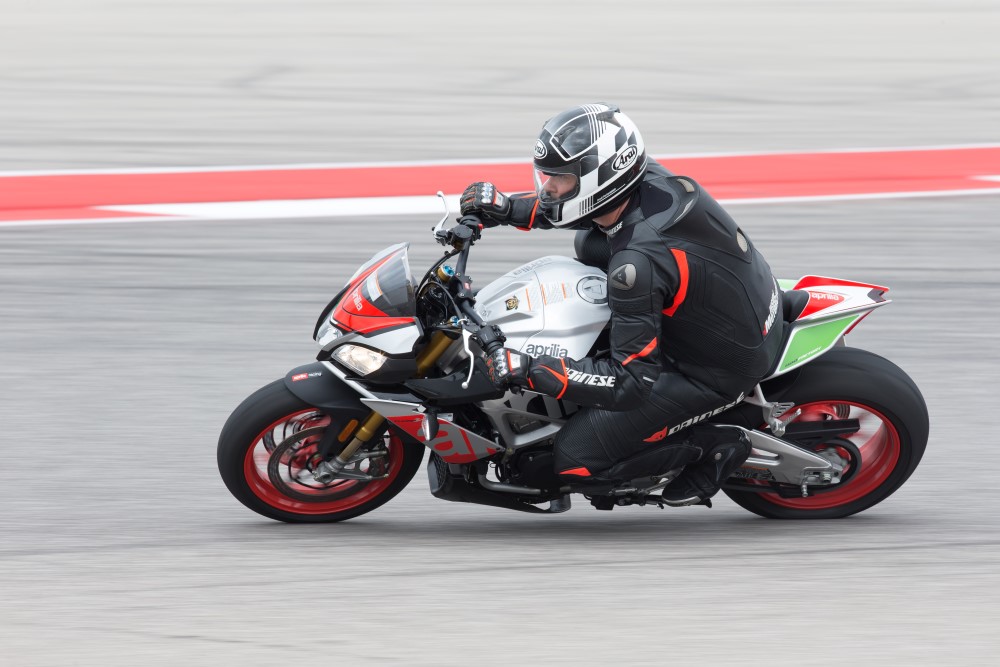 The Tuono V4 1100 RF (Factory) is the streetfighter version of the RSV4, making 173 hp and offering a more upright riding position.

As a package, simply incredible. It has never been easier to go fast. Smooth, linear power from low rpm to redline comes from a 1,077 cc V-Four that forgives you for coming out of the corner in too low of a gear; simply lug it through, and you won’t hear a complaint from the engine. The three hairpin-like corners of COTA were easily taken in second gear on the Tuono and first gear on the RSV4. If you are a little too hot heading into the corners, the outstanding 330 mm front dual disc brakes and Brembo M50 four-piston monoblock calipers will bring you down from speed, while cornering ABS is there to bail you out of more serious situations. Smooth, clutchless shifts (both up and down!) make it easier to concentrate on manoeuvring the motorcycle. Need to click into the next gear while being leaned over coming out of a corner? No worries—the bike does a smoother job of it than I could! 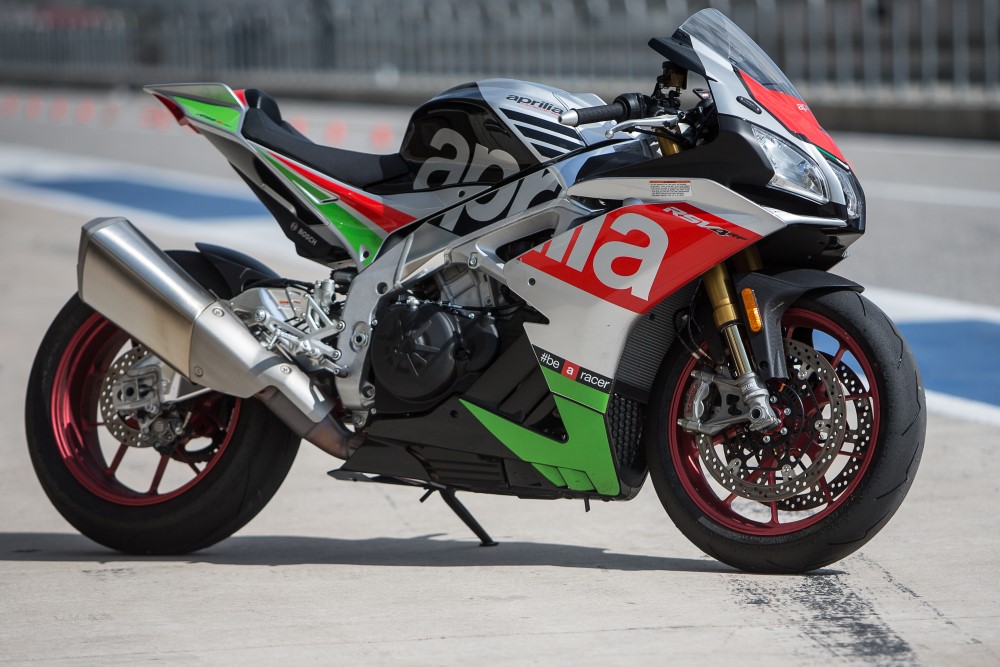 The RSV4 RF (Factory) has forged aluminum wheels, full Öhlins race suspension and a factory race-inspired paint scheme. It’s as race-ready as any litre bike out there.

The upgraded forged wheels on the RSV4 RF made it noticeably easier to change direction while navigating the switchbacks of COTA’s turns 3-4-5-6, and the performance of the Öhlins suspension was clearly better in the same transitions and in hard braking zones. In hairpin corners, where it’s critical to make a smooth transition from upright, hard braking to trail braking and then back on the throttle at corner exit, handing is controlled and smooth. Between the RSV4 and the Tuono, the Öhlins upgrade was more pronounced on the latter, simply because the stock suspension on the RSV4 RR is already so good that only a heavier, aggressive track day rider (like me!) would notice the Factory model’s improvement.

Too aggressive on the throttle coming onto the back straight? Don’t worry about a drive-robbing wheelie; the adjustable wheelie control system works perfectly—and for a little more fun, you can turn wheelie control completely off! 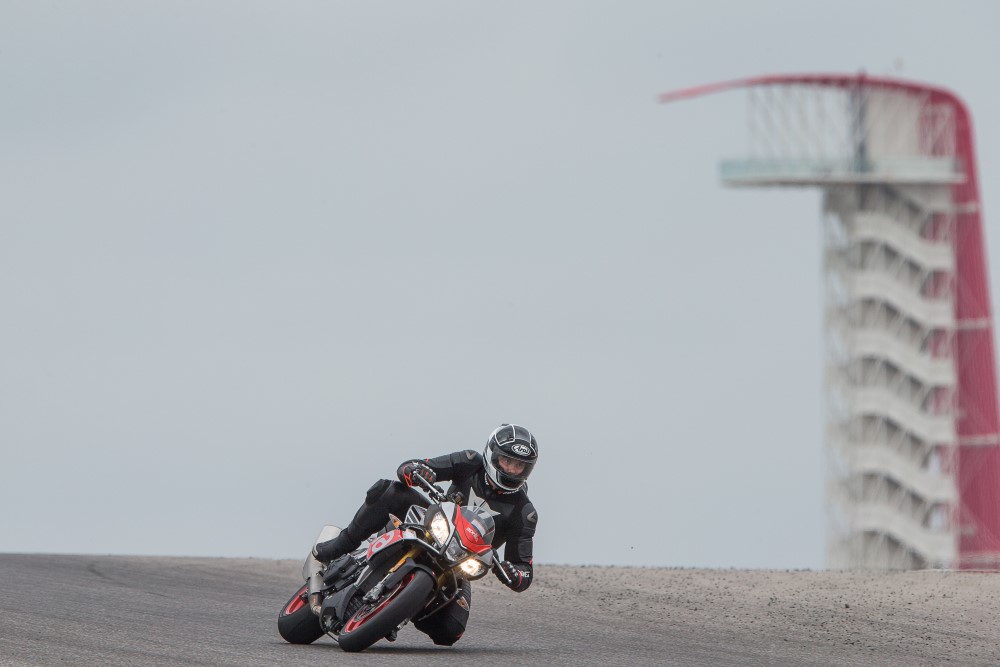 The Tuono handled the world-renowned Circuit of the Americas with poise and control. Öhlins items are particularly noticeable on the RF version.

If you’re looking for a ride that has an incredibly powerful engine, sexy good looks and an exhaust note that stimulates your soul while being Euro 4 compliant, these are your bikes. Both the RSV4 and the Tuono V4 1100 make going fast easy and looking good easier!

Watch for a full, comprehensive review in an upcoming edition of Inside Motorcycles! Subscribe now at insidemotorcycles.mysub.ca! 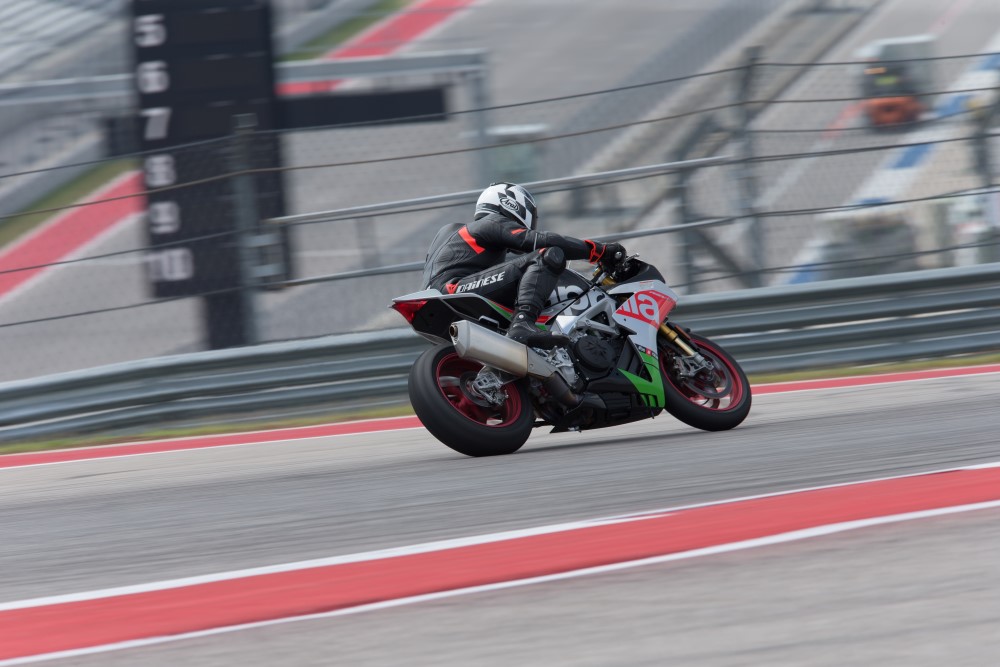 Aleix Espargaro ain’t got nothin’ on our man Steve!