From the road: Honda Gold Wing vs. F6B Comparo

My dad and I are currently half way through our epic US Rock ‘n Roll Ride aboard the 40th anniversary Honda Gold Wing and its bagger brother, the F6B (check out the IM Facebook page if you haven’t been following our ride already). We’ve put down over 3,000 km so far. So what’s better – the classic Wing or its streamlined offshoot?

We’ve been from Toronto to Cleveland, OH to Nashville, TN to Muscle Shoals, AL to Tupelo, MS (birthplace of Elvis) and now we’re in Memphis. 3,000 km in the saddle over six days was long enough to find out that the current GL1800 platform that both models are based on is EVERYTHING it’s cracked up to be. The comfort, the smoothness, the highway prowess… it’s all there. But what are the pros and cons of each variation of the Gold Wing? Let’s compare the differences.

Actually, first we’ll compare the similarities. Both bikes (as well as the new Valkyrie) use the same chassis, drivetrain, braking system, wheels, suspension, etc. Both have cruise control and ABS. It’s essentially the bodywork and the amenities that differentiate the duo, though the F6B seems to have a bit more growl coming out of the pipes. 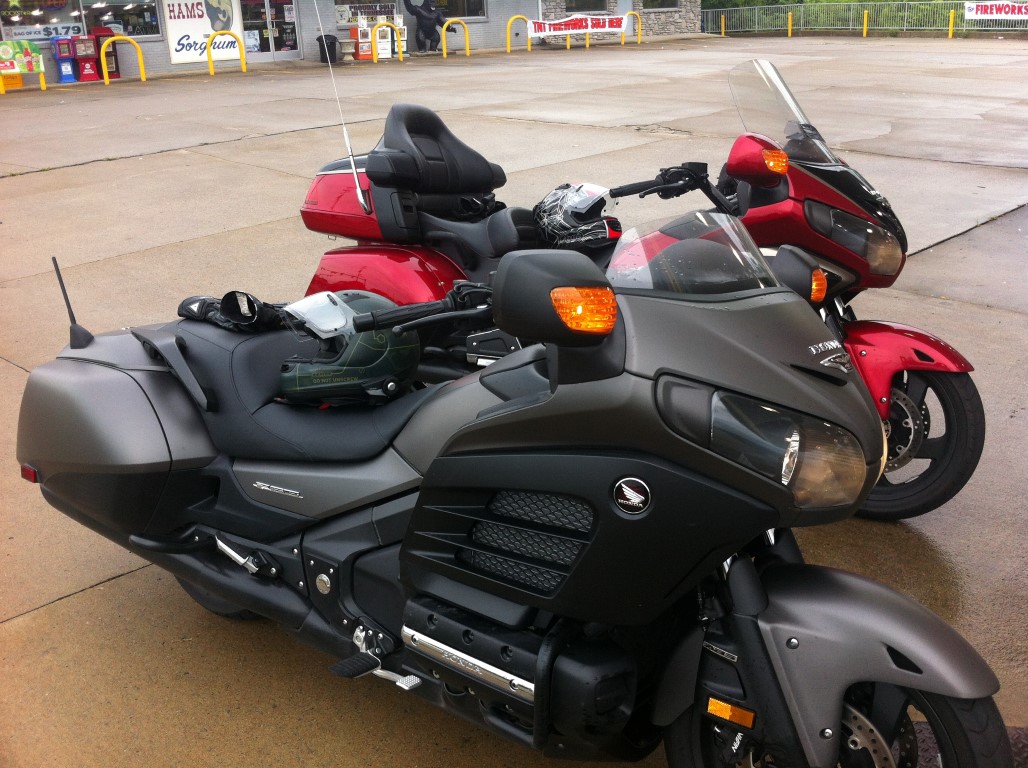 But money’s not everything. That $7,000 extra on the flagship Gold Wing gets you:
Built-in GPS (Honda NAVI system)
A huge top case
Tall touring windscreen with vent
Centre stand
Airbag
Heated seats
Heated grips
CB Radio (get your Dukes of Hazzard on, minus the Confederate flag controversy)
Reverse gear

The Gold Wing wins when it comes to outright mile eating. The tall windscreen deflects most of the wind and a lot of the rain, and combined with the big front fairing deflecting the elements around your hands, upper torso and legs, you’re in a nice little cocoon. The seat is insanely comfortable and the leg and arm positions are so relaxed it’s hard to believe you’re on a bike.

However, if you’re looking for style and cool, go for the F6B all the way. It’s sleek and streamlined and just badass. People will stop and ask you about it, and the attention is bound to feed your inner narcissist. The shorty windscreen doesn’t give off a lot of buffeting, but the angle of the blast coming off it results in a good amount of wind noise above 110 km/h. There’s no top bag, which cuts out a lot of storage space, but you’ll like the lower centre of gravity for getting around town in tight spots and at slower paces.

The driver seats are nearly identical (the back is raised a bit higher on the main Wing) and both of them are SO comfortable! You can’t go wrong here. Remember, we’ve done 3,000 km already on these bikes, with a couple thousand to go. All-day comfort is a just phrase right here.

The F6B is a slick ‘statement’ bagger that makes a damn good tourer. My dad fit six days worth of clothes and necessities into the two hard saddlebags without having to strap anything to the pillion seat. If you can deal with the wind noise (or spring for the factory taller screen available for the bike), you’ll find it worthy of serious touring.

But nothing can beat the mighty Gold Wing when it comes to touring. It could be argued that the sheer comfort and ameneties of the Gold Wing take away from the riding experience – the ride verges on car-like, it’s that damn comfortable – but if you want a bike that can handle a ride such as ours like it’s a walk in the park, the Gold Wing is your choice.