Flat Track Canada, the increasingly popular race series that’s now in its third year, is doing wonders for the sport of flat track in Canada. For the second year in a row the organization is hosting a series of flat track schools, open to anyone with an interest in the sport. Very affordable and a ton of fun, I got to experience the day-long school first hand with more than a dozen other ‘students’ at the Paris Speedway 1/8-mile bullring in Paris, ON.

Flat Track Canada President Aaron Hesmer is the lead ‘classroom’ instructor, providing students with all the information they need to improve their talents over several on-track sessions. While you’re welcome to bring your own gear (and bike) if you’ve got it, FTC has all the gear you could possibly need, right down to the steel shoe that is a requisite of dirt track racing. Heck, even the bikes are provided. 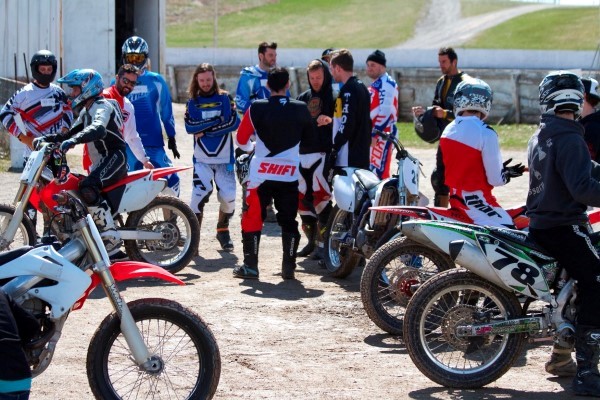 A highlight to most of the students on the day I was there was the attendance of Pro Superbike racers Trevor Daley, Kenny Riedmann, Kris Garvie and Ross Millson. Daley and Garvie, total rookies to the sport, were looking to catch onto the flat track wave that has caught on in Canada and internationally. A handful of Toronto-area hipster types were also there to lose their flat track virginity, including two guys who had never even ridden a motorcycle before! 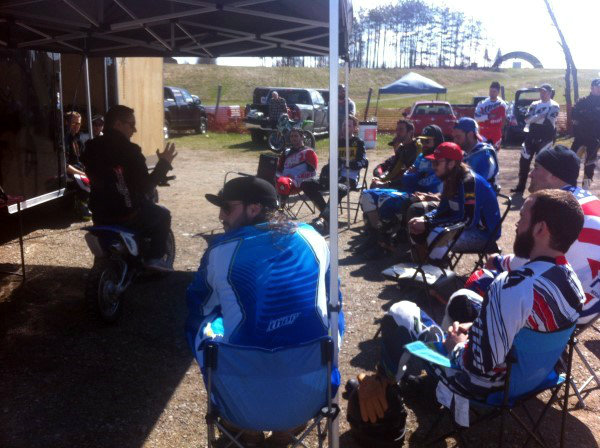 After signing in with Katalin Hesmer (Aaron’s partner in business and life), riders geared up and sat down for the first of several classroom sessions. The first one covered the basics of riding a bike on a dirt oval, including body positioning, gear selection and the lack of a front brake. After about 15 minutes we all walked over to the track wall and watched instructors Doug Lawrence (an AMA regular who’s competing in the upcoming X Games), Braden Vallee (FTC Intermediate champ) and Brandon Seguin show us how some of the top riders in Canada do it. FTC Novice champ Kyle Sheppard was also there getting in some track time. Soon the class bikes were fired up and the first group of students rode onto the track.

AMA Pro Doug Lawrence shows the students how to do it! (Photo by Outlaw Productions)

Students were split into three groups of five based on riding level/experience. Everyone rode approximately a dozen laps in the first session to get a feel for the bikes and the track before returning to our seats for the second classroom session, which focused on riding lines, throttle manipulation and smoothness.

Hesmer talks about riding position in the first ‘classroom’ session at Paris.

The ensuing class segments focused on more advanced techniques, and the final two hours were relatively open; the instructors provided individual feedback to students and were available to answer any questions. I took the opportunity to pick Lawrence’s brain on riding lines, while Aaron’s dad Joe recommended that I be smoother on the gas coming out of the turns, which helps you manipulate the rear tire to control speed and position on the track – finesse over aggressiveness. It worked. 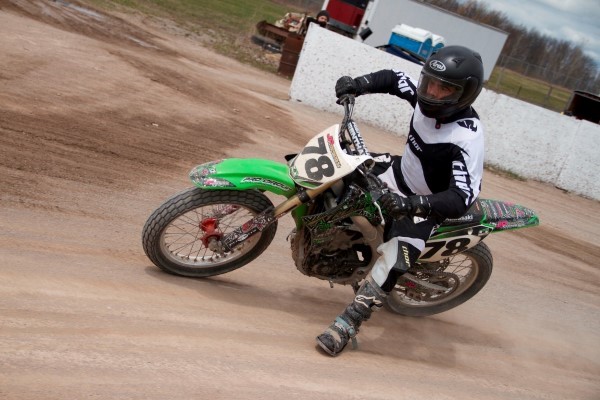 Thanks to thorough instruction, advice and feedback, I became more comfortable than I’ve ever been on a flat track bike. (Photo by Outlaw Productions)

The on-track sessions were quite lengthy for what you might expect at a busy school course. By the end of the day, it’s safe to say that every rider put in more than 60 laps, and we all know how important seat time is to finding success with any form of motorcycling. Falling wasn’t uncommon, and usually served as a measuring stick for how far was ‘too far’ when leaning the bike over at speed on a slippery surface.

Pylons on the course directed students to the ideal track lines.

When all was said and done everybody was smiling, though our bodies were depleted and more than a little sore (your inner left groin will feel the effects of flat track for days). We’d all had a blast and everyone agreed that the program was well-executed, inviting, thorough and – at $179 (including lunch, gear, bikes, instruction from champion racers and loads of track time) – a fantastic deal.

“The format was great,” said fellow student and flat track newbie Rob O’Brien. “I think the balance of track time to class time was right, coming back in and getting feedback was always useful and the open afternoon sessions were great.” O’Brien does track days on road courses with his Yamaha R6. How did the flat track school compare? “I knew coming here we were going to push it a bit, but it’s a safe place to push it. The speeds aren’t that high, so there’s not too much danger. On a road race track you’ve got to leave a little more margin if you want to go to work on Monday.”

In his first time flat tracking, Rob O’Brien was one of the faster ‘rookies’ by the end of the day. (Photo by Outlaw Productions)

Mowey McDonald had only ever been on a bike in a parking lot before coming to Paris for the school, but the Toronto resident was thrilled with the instruction and the format of the course as well. “I think everyone who rides a bike could benefit from this, regardless of whether they’re going to do flat track or not. As far as the way the school is structured, it’s awesome. They had everything set up for us. It was super professional.”

McDonald assured me that the FTC school was his first step to becoming a member of the motorcycling family. “I even went out and bought a helmet just for this, so I’m pretty committed to getting a bike,” he says. “I will be a rider for life now.”

Pro Superbike stars Trevor Daley and Kris Garvie both came out of the school with a newfound love for going ‘slideways.’

“The tips and techniques that Aaron and the other experienced riders shared with the class were things even I was utilizing each time I went out on the track for the next session,” said CSBK national runner-up Daley. “With each session it was clear that everyone in attendance was becoming more comfortable on track and having a great time and getting faster.”

“I really, really enjoyed that sideways riding,” said Garvie, who could be heard whooping it up in his helmet on track. “I had a blast and was smiling from ear to ear. I definitely want to do more of it. There is something badass about setting up for a corner without any front brake, sliding the front and rear tires, but still being in total control the whole time. I think that’s what makes it exciting for the fans, too.” 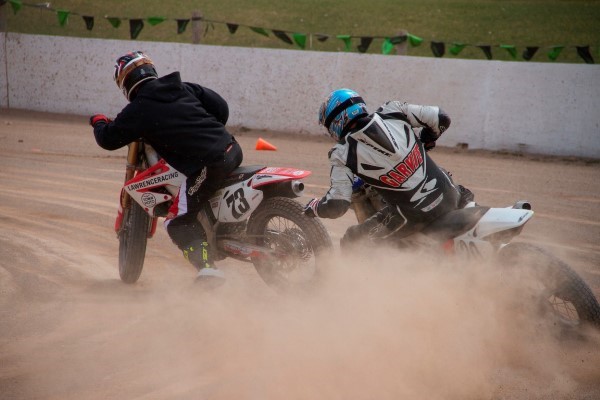 While the remaining spring sessions are booked for 2015, fear not – classes will start up again in the fall once the riding season is over. Visit www.goflattrack.com for more info on the school program, and to find out more about the Flat Track Canada 11-race championship series that competes at tracks across southwestern Ontario, visit www.flattrackcanada.com.