@BMWMotorradCA • @BMWMotorradUSA • Two days in the canyons outside of Los Angeles proved the perfect test bed for the revised 2015 BMW R1200R.

Inside Motorcycles was invited to tag onto a BMW Motorrad USA ‘ride-away’ press event based in Santa Monica earlier this month, the lone Canuck publication to join the American guys for the first taste of BMW’s new 2015 R1200R on North American soil. While most of the assembled American moto hacks rode a test unit back to nearby offices and would have the opportunity to keep the bike for an extended period, I had a flight back to Toronto less than 48 hours later, so all of my testing was constricted to two days. Fortunately the roads around Santa Monica create a motorcycle rider’s paradise, giving me a prime opportunity to get a feel for the revised-for-2015 R1200R.

A pre-ride press introduction covered the basics of the new BMW’s updates for the latest model year. In goes the latest 1,170 cc air/liquid-cooled boxer flat-twin engine, which pumps out 125 horsepower (a significant 15 more hp than the outgoing R model) and 92 ft-lb of torque. Power peaks at 7,750 rpm, just before the rev limiter kicks in at 8,000. ABS, Automatic Stability Control (ASC) and two riding modes (Road and Rain) come standard, while the Riding Modes Pro upgrade option brings in Dynamic Traction Control (DTC) with banking detection as well as Dynamic and User riding modes, the latter of which is customizeable. A slick and content-rich DFT instrumentation panel is one of the most thorough you’ll find on any motorcycle, Dynamic Electronic Suspension Adjustment (ESA) is another advanced add-on that automatically adjust suspension damping to riding conditions on the fly, and Gear Shift Assist Pro allows for clutchless upshifts. Our test units all came with Dynamic ESA, Gear Shift Assist Pro and GPS, but just the basic Riding Modes package.

For more details on the BMW R1200R’s upgrades for 2015, read the upcoming full review in the July issue of Inside Motorcycles.

Having never ridden in the Santa Monica area before, I sought the advice of some of the local journalists on where to ride. Rider Magazine’s Greg Drevenstedt, who I’d met a couple of times on international press launches, graciously offered to be my guide for a few hours on the first day (how Canadian, eh?). Using his strong knowledge of the area’s best bike roads, he took me on an amazing ride that served as the perfect basis for testing the sport-minded BMW R1200R.

While the previous R was well-liked and a solid performer, this year’s model takes things up a significant notch. Thr 2015 R1200R now straddles the line between a naked roadster and a true streetfighter. Power is immediate and ample in the Road mode, the engine feeling muscular throughout the powerband.  It doesn’t mind being lugged down low and offers strong pull even if you find yourself in a higher gear than you should be, which can happen when navigating technical roads with blind or decreasing-apex turns. 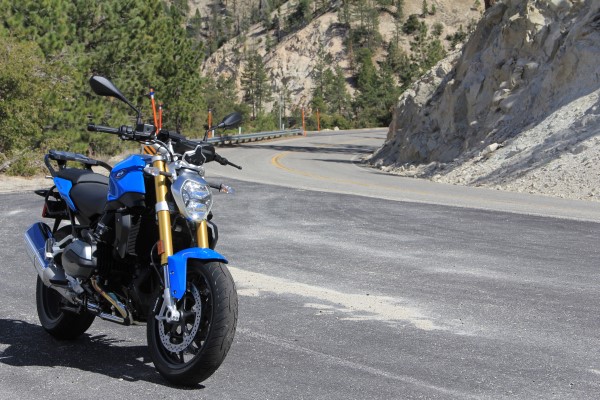 As I got used to the bike and the very tight roads that my guide led me on (most of which had drop-offs on one side), I found the Rain mode to be just what I needed. Horsepower is cut down to 100 and throttle delivery is smoother and more manageable, allowing me to focus on staying alive while keeping up with Greg as best I could. The brakes are absolutely fantastic, two discs in front and one in the rear grabbed by four-piston radial Brembo calipers with ABS. There’s good feel and fantastic bite.

On Day 2 I was on my own and took the advice of a few journalists and rode the Angeles Crest Highway, 66 miles (106 km) of twisting roads that cuts through the Angeles National Forest just half an hour from LA. The R1200R cruised comfortably on the highway, the DOHC twin running very smooth and vibration-free while the upright riding position brought no ill effects after two full days of rigorous riding.

After shaking off some rust on Day 1, riding from one end of the Angeles Crest and back on the second day allowed me to really give the R1200R a workout. I spent the day in Road mode and with the ESA set to Dynamic, I pushed the Beemer hard through turn after turn on the mostly deserted highway. The suspension and chassis were thoroughly impressive, the tires staying planted and the front end responding instantly to rider input. The engine packs a wallop when you get on the gas hard, allowing you to unleash your inner hooligan should you need to do so.

After I parked the bike at my hotel at the end of the day as the sun set over the Pacific, I came to the conclusion that the 2015 BMW R1200R is a lot like the German maker’s finer sports cars – a high level of comfort and luxury combined with very high-performance braking, handling and engine operation.

For more details and a full review of the BMW R1200R, pick up a copy of the July issue of Inside Motorcycles (on sale in mid-June) or order a subscription online here!

Savadori Takes Third Consecutive Win of the Season in UK‏

BMW presents “Concept 101” – The Spirit of the Open Road‏

BMW presents "Concept 101" - The Spirit of the Open Road‏