by Colin Fraser
in News
0

Ducati invited the world’s press to visit the Ascari Country Club road course in the south of Spain near Ronda at the end of September to sample their new 2016 Monster 1200 R.  This latest Desmo twin-powered streetfighter is now the top-of-the-line Monster, and this naked offering is not short on top-of-the-line components.

Designer Gianandrea Fabbro, also responsible for the Panigale superbike, explained that the new machine is more sporty as well as more technical.  “Our goal was to enhance the technical look of the Monster R and make it as elemental as possible,” confirmed Fabbro. Obvious hard parts that attract attention include the black-finished 48 mm Öhlins forks, matched with a similarly longer travel new Öhlins rear shock, as well as a top-mount, linkage-operated Öhlins steering damper.  All are fully adjustable. 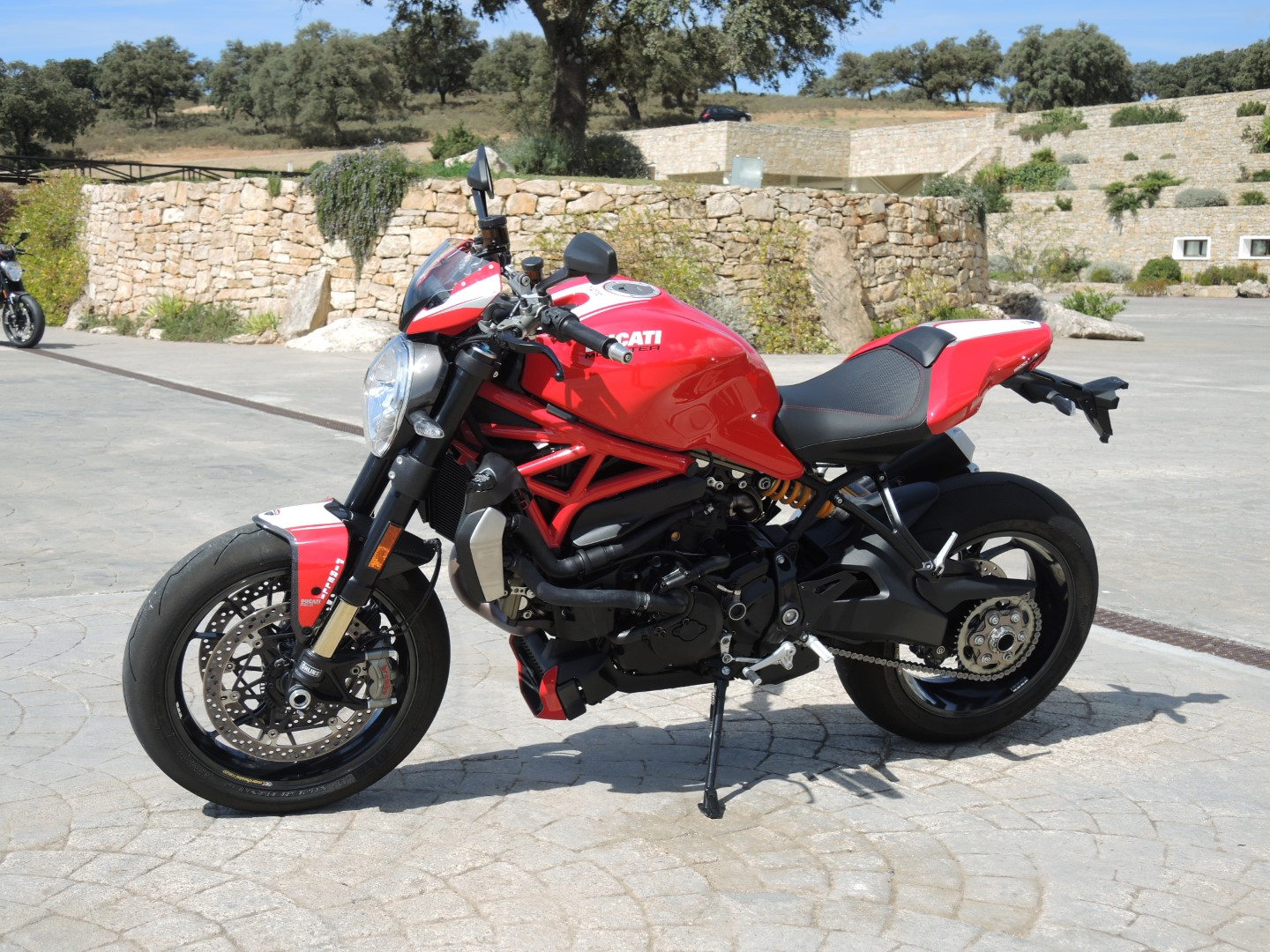 Gorgeous Marchesini forged, three-spoke wheels are part of the premium Monster R package, and an effort has been made to lower overall weight.  Stock rubber is sticky, performance-oriented Pirelli Diablo Supercorsa SP, with a Panigale-sized 200/55 tire at the rear.

One of the goals of the R model was to deal with ground clearance and foot peg convenience issues, so the new bike loses the combined aluminum footrests found on other Monsters.  The new setup has higher-mounted, forged bracket pegs for the rider, and separate, removable footpegs for the passenger.  Thanks to a new subframe and suspension, the seat winds up 20 mm higher – acceptable if your inseam is at least 30 inches.

This is the first Monster designed to meet new Euro4 standards, more specific in terms of emissions, noise and some safety aspects of production.  The powerplant is based on the 1198 cc liquid-cooled Testastretta 11-degree engine used in the Monster 1200 S, but revised to produce a claimed 160 horsepower. 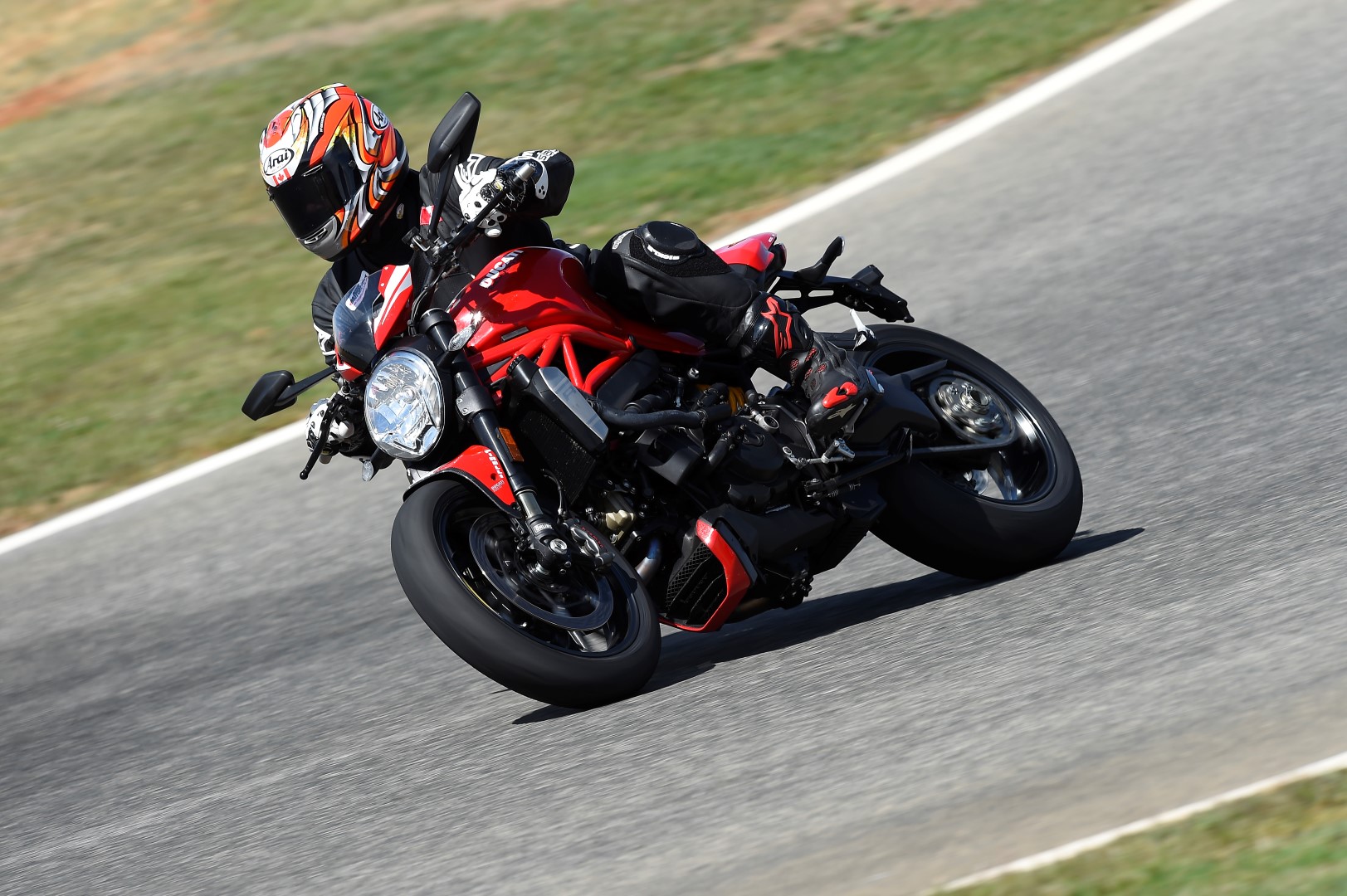 A new exhaust with a 2-1-2 design, featuring much bigger header pipes, leads to new pentagonal stacked twin silencers with a new catalyst “box.”  The Mikuni fuel injection now uses 56 mm throttle bodies, up 3 mm.  New plastic, rubber and metal noise absorption panels in and around the engine reduce sound, as does new 106 mm pistons with a special graphite coating.

On the technical and fun Ascari venue, the latest Monster proved to be fun, able and sure-footed, a step up in terms of ultimate performance compared to previous naked Ducati twins.  Ground clearance is definitely improved, while the wide bars provide plenty of leverage.

The new footpegs make the seating setup a little cramped for taller riders, but this isn’t a major issue unless you plan to ride all day – unlikely with a Monster.  The revised seat looks great and is comfortable, but does not offer as much room to move forward and back compared to the regular version. It is unlikely passengers will enjoy the marginal rear accommodations!

Outright performance is strong, although power claims are optimistic.  Throttle response is very good, linear, with the stonking delivery you expect from the company that built the original streetfighter. Watch for a full review of the 2016 Ducati Monster 1200 R in an upcoming issue of Inside Motorcycles!