Wrapping up in Qatar

Wishing I was getting to ride a Moto3 bike.

What an awesome trip! It was great to experience another culture as well as racing at a new track, race series and at night. The floodlights were really, really spectacular and it was like racing on a clear bright sunny day, maybe even better. The lights did hurt my eyes a bit but I got used to that. I had so much fun and so did Dad and Pat. Everyone was friendly and helpful.

I have been asked about the differences between the bikes in the Dream Cup class compared to Canada. There are a lot more changes available to make the bike fit the rider. You weren’t allowed to change the bike until after the first practice session where you had to go out with the baseline settings the Honda mechanics reset at each round. Then each rider’s mechanic was given a tray of parts that included front and rear gearing sprockets, two different sets of front springs and a rear spring for the suspension.

Other differences are Dunlop tires, a quick shifter (the horn button is converted to become a manual switch to cut ignition), two fuel mapping settings that can be swapped when on track (another converted switch), a pit lane rev limiter to control speed in the pits (there is a fine if you speed), GP shift (we were able to change it to standard after the first session), and aftermarket clip-ons and rear sets that meant the foot peg could be adjusted a little.

So there was a lot to learn about the bike as well as learning a new track. 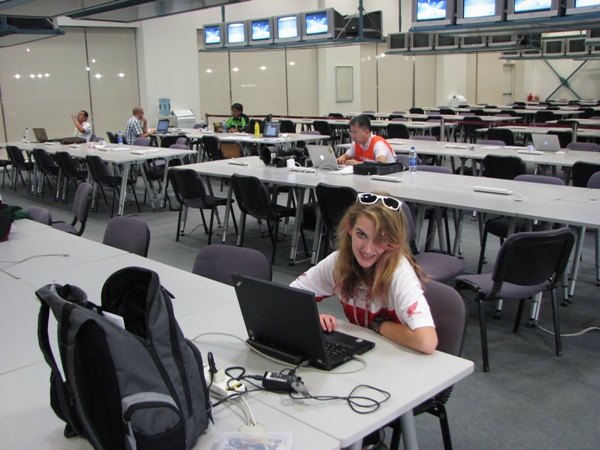 Another question that was asked was how did the racers ride differently. They raced very hard. If they wanted a part of track it didn’t really matter if someone was already there or not. Half a wheel in front was enough. I had a couple of close calls in qualifying and races. I think the organizers had to make a one direction change rule after the final turn as there was a crash in an earlier race on the run to the finish line. But I knew it would be like that before we went from watching the race videos.

On Sunday we went back to the track to watch the top eight Asia Dream Cup finishers test for a wild card entry for the Asian Moto3 rounds in 2013. Honda brought four brand new NSF250R bikes, split the riders into two groups and let group one out in the morning and group two out in the afternoon.

I was extremely jealous of them not only to get to test on a Moto3 bike but also because it looked like a blast. Their lap times were very good. The fastest two (Ono and Hook) had raced 125GP bikes before. Their lap times would have put them 22nd and 24th in the first Moto3 free practice back in April. So it just proved to us how fast these guys are in ADC and I did OK as a wild card. 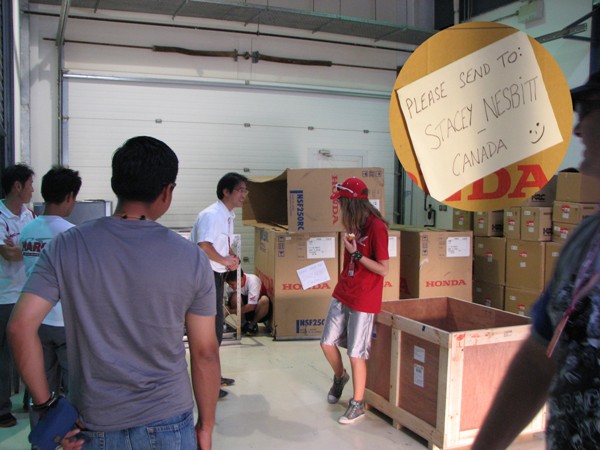 We checked out the bikes and helped pack up in the afternoon. Dad wanted to sneak a bike home but seeing they were a tad too big for carry-on we improvised and put our own shipping label on the box. Maybe they will ship it to the wrong address!

On a final sad note, we would like to extend our sympathies to the Kuhn family on the passing of Dianna while we were in Qatar. They were amongst the first to support me in this incredible experience.