Way past the coastal all-inclusive resorts, Mexico is a rugged country abundant with fun, twisty roads, delicious, spicy food and warm, friendly people. My husband Jamie and I decided to disregard the bad press and fly to Mexico to ride motorcycles.

At some point, we’ve all been told by someone that riding motorcycles is dangerous, but we ride them anyway. It’s like when you were young and your Mom said “don’t touch the stove” when she was cooking in the kitchen — you touched it anyway. Advice from others seems to be abundant, but we have to learn for ourselves.

And so it was with Mexico.  I’ll admit, the adverse publicity had subdued my enthusiasm, and Mexico was not our first choice to ride motorcycles through, so it took some convincing from our friends who went last year before we booked our flights (only $600 for two, round-trip). It sounded like an inexpensive riding vacation to somewhere exciting and different, so my husband Jamie and I decided to trust their judgement, our own risk management skills and the Riders of the Sierra Madre motorcycle touring company, who would be our guides and provide use of their BMW GS motorcycles. We were off. 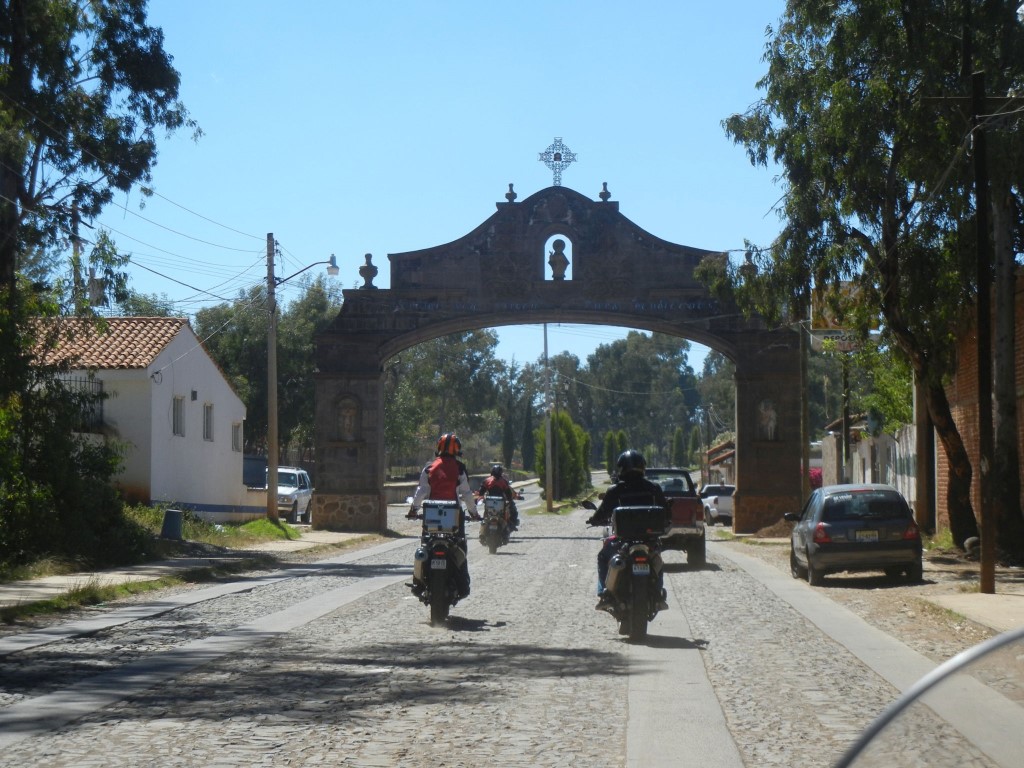 As we flew over Mexico to Guadalajara, what we saw below us was a rugged land of mountains, forests, and farms, with twisty roads throughout. Wow, I thought, the BMW GS series is going to be perfect for those roads! On the ground, we were greeted by Riders of the Sierra Madre hosts John and Lynn Gilbank, Canadian transplants who are hospitable at every turn. They introduced us to the bikes after a welcome dinner of local food. Each bike was set up to our personal needs; seat height, lever distance and a top box for carrying any personal affects. If you sign up for one of the longer trips they offer — Coast to Coast, Into the Heart of Mexico, or their newest ride, Treasures of the Sierra Madre — a support truck brings the rest of your belongings to the next hotel. We chose the Hub & Spoke tour which returned each day to Ajijic, where the ride headquarters are located. A ride day is about 300 km, with stops to experience Mexican flavours in food and culture along the way.

Our six-rider group was led by a gentleman from Texas named Ray who had many years of experience on both street and dirt bikes, and who kept a good pace even with his wife Adela as pillion. When Ray and fellow guide John are not running tours, they are both on their bikes every day as a means to visit friends or run errands.  Their riding enthusiasm is infectious and spilled over to the group. 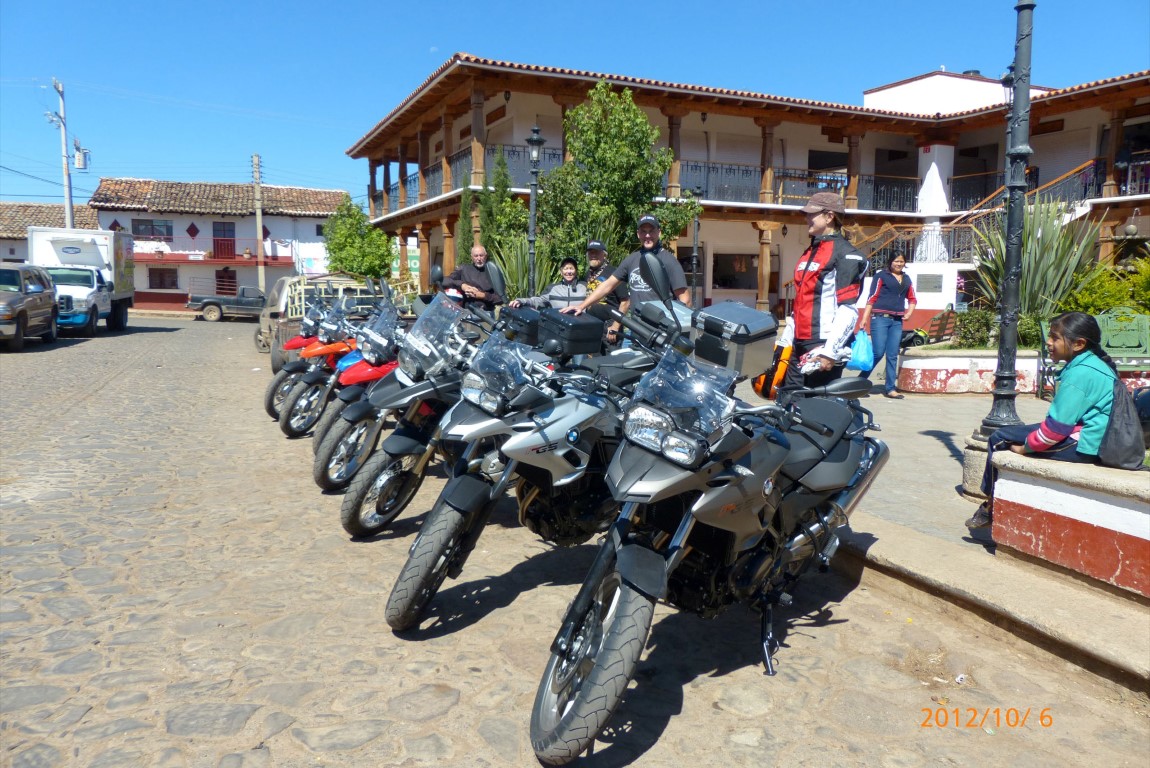 Each ride day began at 9 am, and cocktail hour was 5 pm. We enjoyed the flexibility of the tour with no fixed itinerary, as the ‘wine talk’ each night dictated the next day’s ride. Riders of the Sierra Madre is a small, family-operated business that really listens to its customers’ suggestions of what they would like to do.

On the first day of riding, we quickly noticed that the Mexican rules of the road are very loose; anything goes as long as you are courteous and respectful to the other people on the road. The right side drive is consistent with North America, and they appear to have the same basic signals as we do, but the similarities stop there. 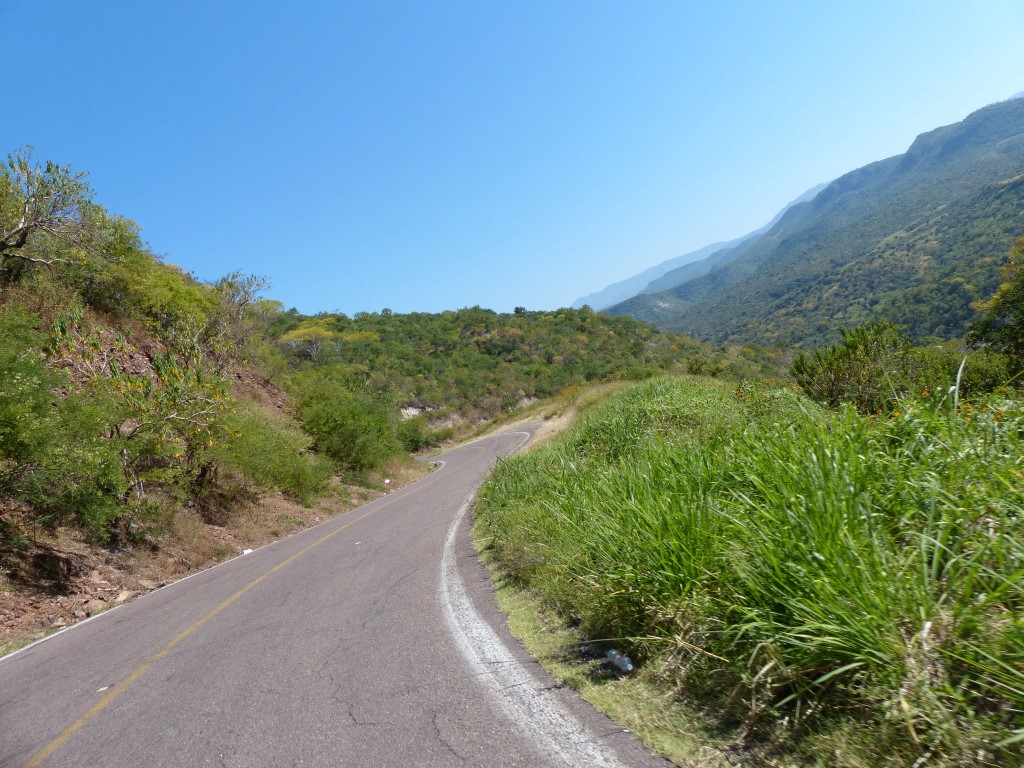 For example, if you want to pass the vehicle in front of you, options include passing on the left or right (sidewalks included sometimes)! Stop signs and red lights don’t always mean stop forward motion and wait;  if no one is coming quickly from the other direction, continue on your way. A Mexican will be happy to teach you this rule with a friendly toot of the horn to say “Hello, here I am behind you, ready to go when you are.”

When slower speeds are required it isn’t suggested from a road sign, but rather an object laid out in front of you resembling a speed bump. But these are Mexican-style speed bumps called topes (pronounced toe pays) which span the whole road with no escape. They are unpredictable in shape and size, and in a day’s riding it wasn’t uncommon to see two dozen of these. Our guide John warned us that other riders have ruined their day when carrying too much speed over the topes, their handlebars jumping out of their hands resulting in a quick trip to the ditch or a blown fork seal. Dirt bike experience and an adventure style bike with leggy travel allowed us to hit the topes without losing all of our speed, but I would not attempt the same on some cruiser or touring-styled machines. 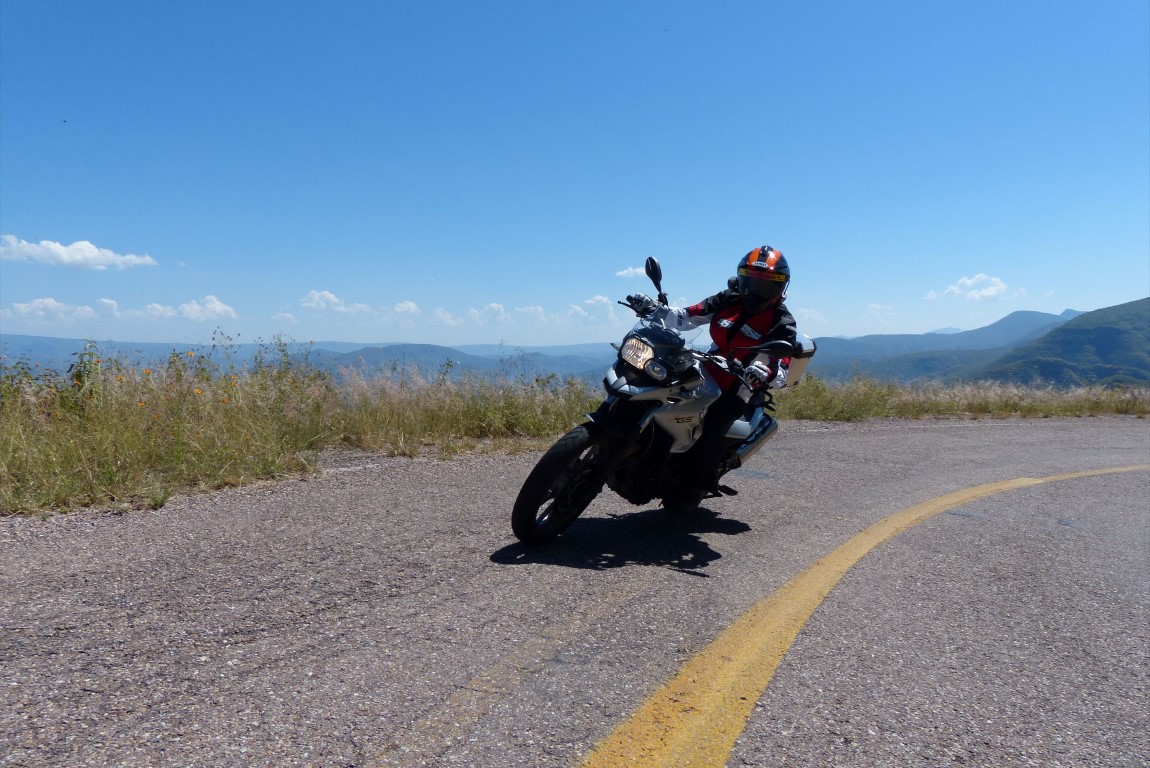 Once you get out of the towns, you can wick it up on the twisty roads through the mountains offer stunning views. Our BMW bikes worked flawlessly. They were nimble, lightweight and quick enough to enjoy the sweeping pavement. Picking up the pace you could dream you were on a racetrack, railing the banked corners. John explained that in the last 10 years, the Mexican government has spent billions of dollars on infrastructure, and that is the reason the black top was for the most part in great shape.

There were, however, times when I was abruptly shaken from my race track dream back to reality. Once I was confronted with a long-horned bull head-on around a blind corner. A quick line change swerve avoided some new body piercings.  We found our many years of riding experience (both on and off-road) was a huge advantage on this trip, so surprises such as a pothole the size of a fridge or toeing a small strip of road with a Corona truck coming the other way doesn’t spoil your holiday. It all made for some exciting riding and reminded us that we were responsible for your own safety. 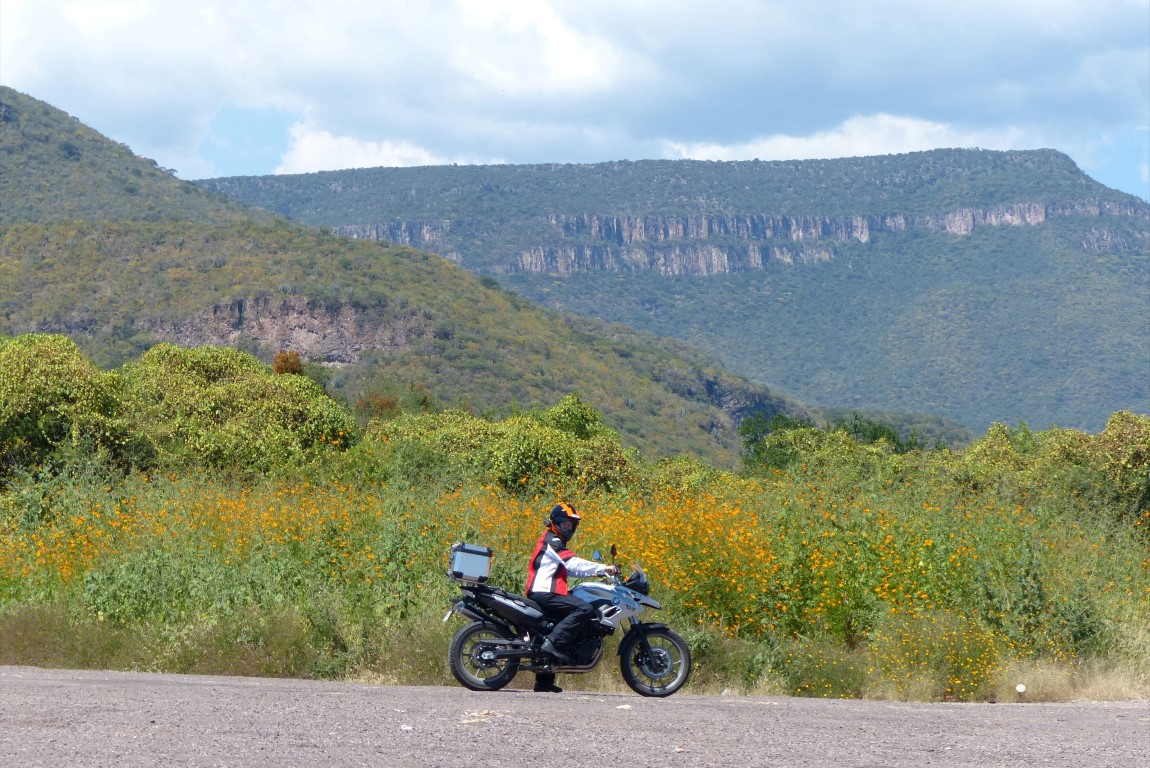 One day we rode through Guadalajara and headed north where the road drops from 1,566 metres in elevation (5,138 feet) into a valley and then back up and around the canyon, a favourite ‘track’ for the locals. We stopped at a burrito bar called Los Burritos de Moyahua, where 25 sport bikes were lined up belonging to some young locals all clad in leather race suits having lunch. It is a popular destination for riders from Guadalajara to visit on Sundays. We spoke to a couple of them who were in the parking lot trying to fix a leaky rad cap that had spilled coolant all over one rider’s front tire. Using hand gestures as a means of communication, we showed them how much fun we were having on their roads. Finally, we asked if they could do some wheelies for us when they left. Apparently the word wheelie is universal in bike language, and soon a contest of third and fourth gear wheelies was performed back and forth in front of the burrito bar.

There was no shortage of interesting cultural icons to see in Mexico, like the Round Pyramids of Teuchitlan in the Tequila Valleys. Remarkably, these are a very recent discovery (1976) and excavation didn’t begin until 1998. Now, after being built over 2,000 years ago and abandoned less than a thousand years later, several of them have been revealed and they are considered unique in world architecture. The view of the valley from the pyramid site in the foothills of the now inactive Tequila Volcano was equally impressive. 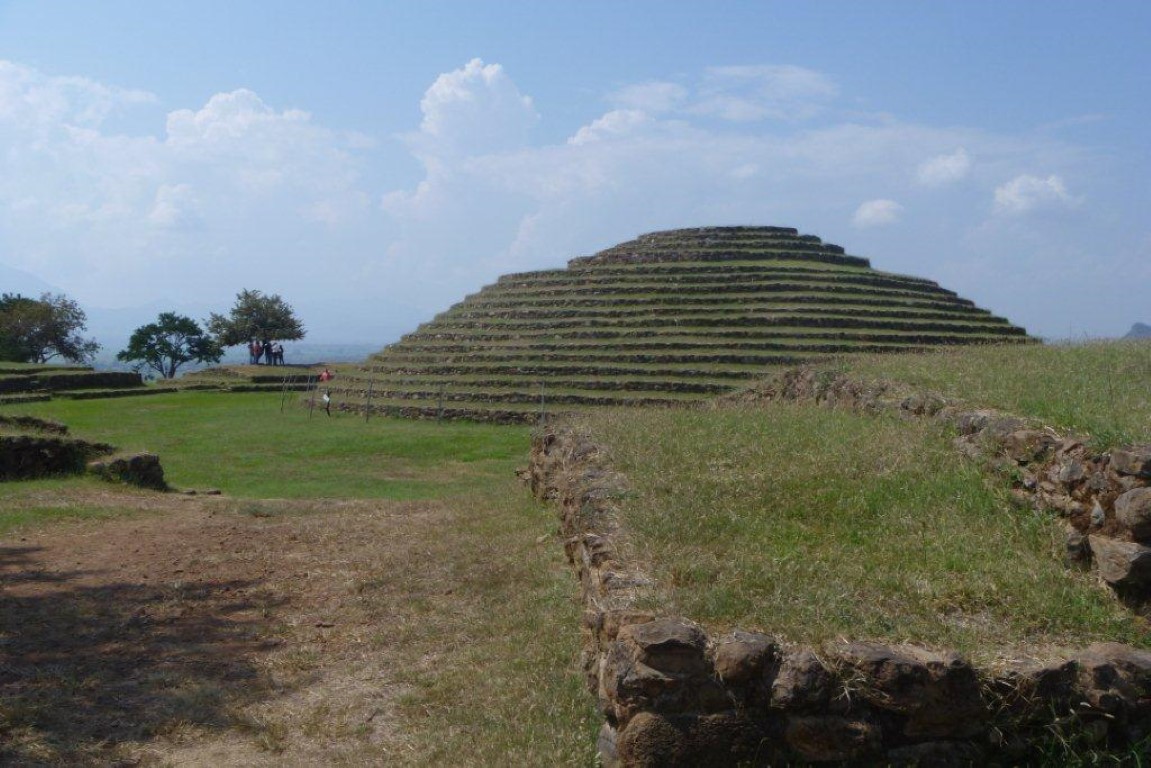 The Hub & Spoke tour allowed for some off-bike time, including shopping in Ajijic.  We had a day to wander aimlessly along a grid work of river rock cobblestone roads that looked like a tortoise shell spread throughout the town. We noticed the streets, though sometimes rough, were all proudly absent of debris.

You don’t have to walk far before finding Mexican delights such as pure vanilla, colourful hand bags, handcrafted jewellery, clothing or an open door bar to have drink in. The atmosphere was laid back, friendly and the people were respectful to us and each other. Our guide for the day, Arnulfo, said “it is just the Mexican way.”

There was so much to do off the bikes, including “paseo del lago” (walking the lake front) on the Malecon boardwalk, hiking up a mountainside trail to visit the statue of San Andres (the patron saint of the town; each town has a saint overlooking it and the towns people regularly pay homage to it) or taking a boat ride to see an island market on the Laguna de Chapala. When hunger grabbed us, we had tacos from a roadside vendor, not unlike a hot dog cart back home. 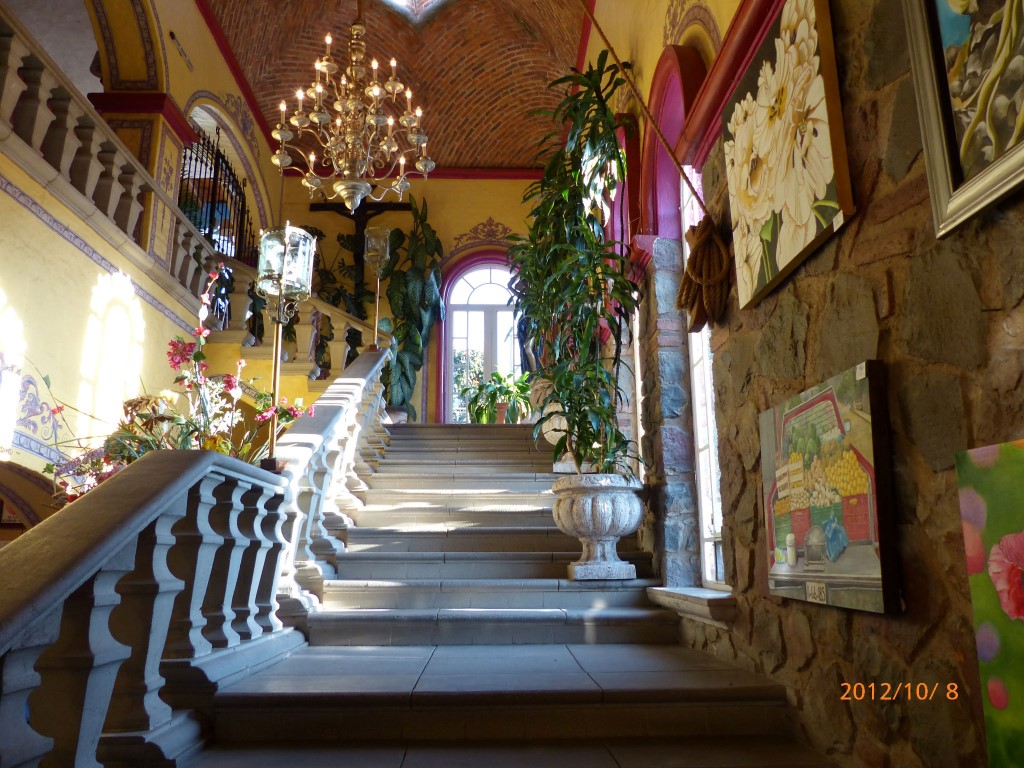 Arnulfo noted that in Mexico you can walk around drinking beer, so we bought a six-pack and took it over to the barber shop where you can get a hot towel shave for 50 pesos (approximately $4) and an earful of Mexican laughter. We met many warm and friendly Mexicans, never once feeling we had to be wary of our safety even as we stumbled to our hacienda late after a night of dancing at the El Bar Co.

Where was the hotbed of crime? I conclude that it’s only the drug cartels sharing bullets between themselves, while the police keep the citizens safe. It’s like a hornet nest — if you don’t poke it with a stick, there’s a good chance you won’t get stung. There are thousands of Canadian and American transplants that enjoy the weather, food and culture of our southern North American neighbours year-round.

At the end of the trip, I noticed Jamie had picked up a real estate booklet and put it in our back pack. He said, “you know, this is a nice place.” After our time in Mexico, we discovered that it just wasn’t as hot in the kitchen as they were cooking on the news. 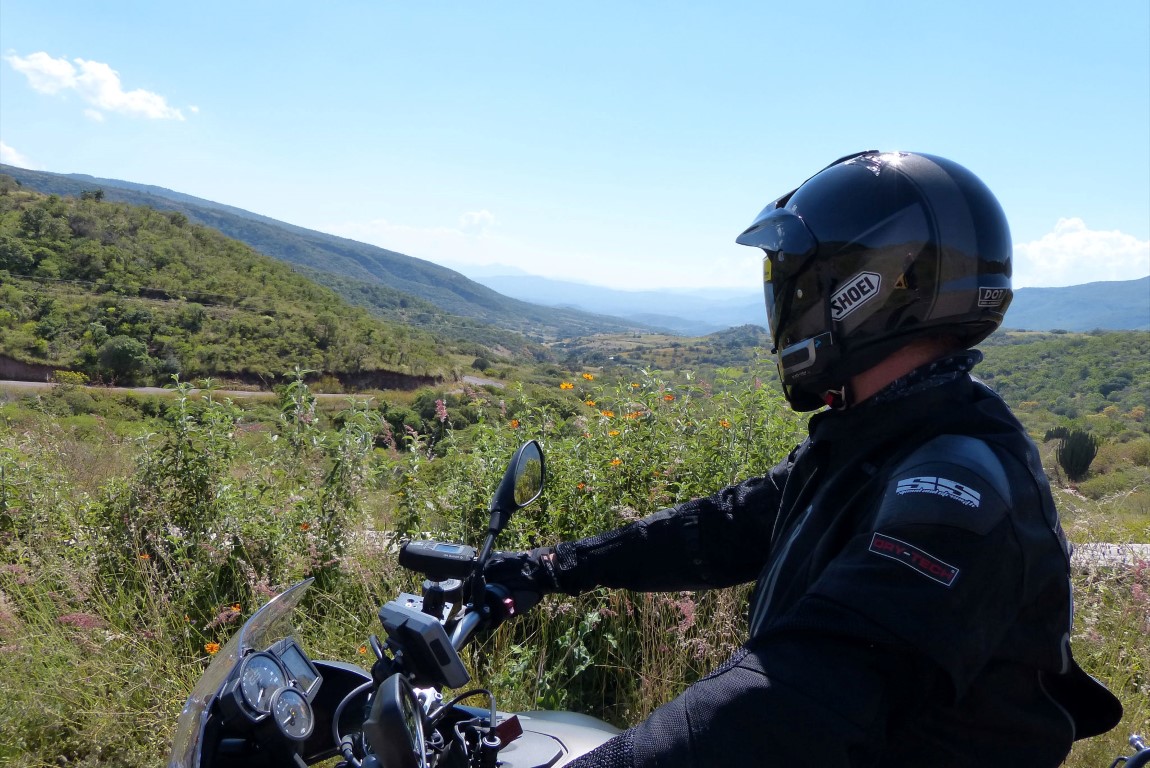 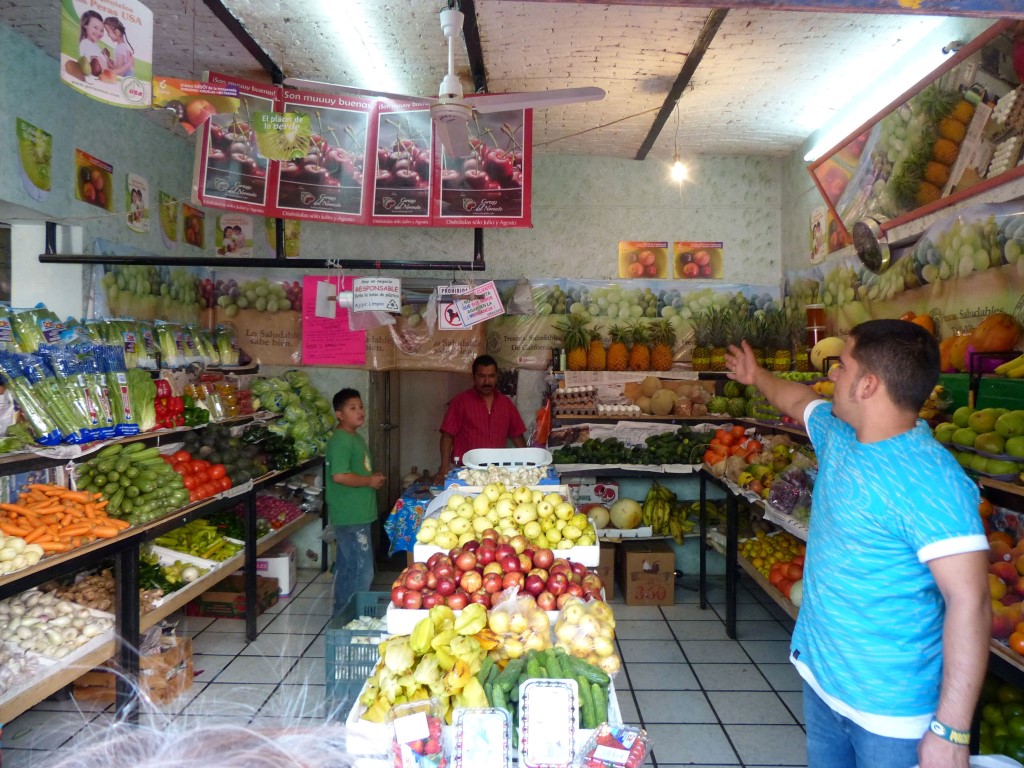 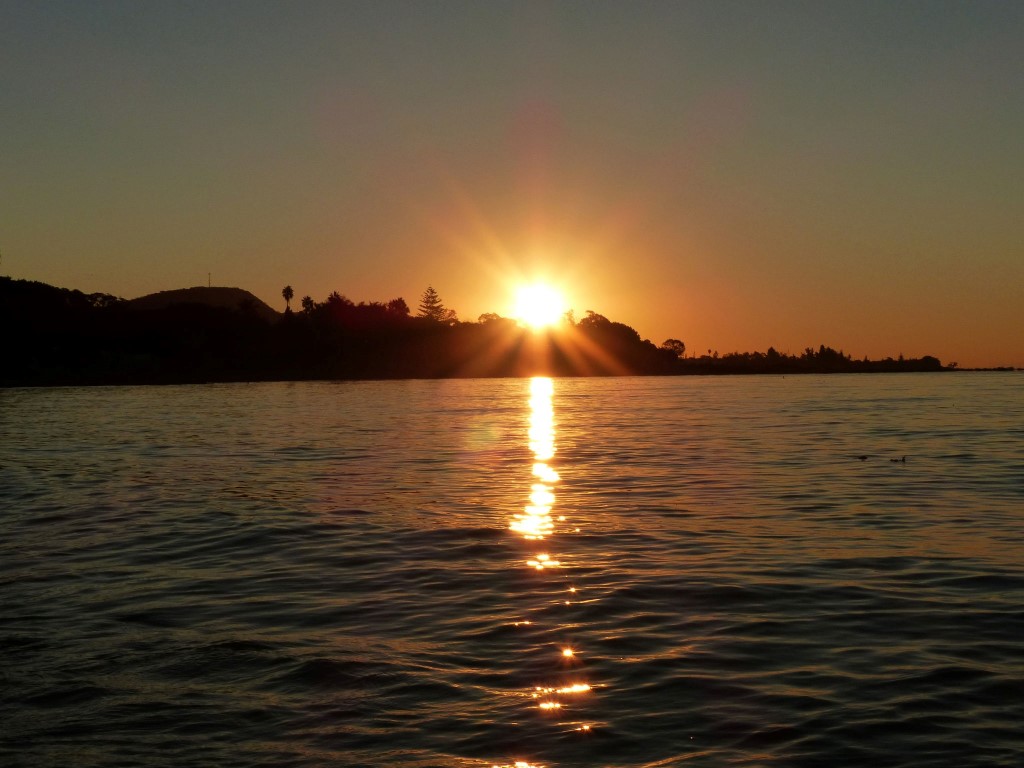