122 racers assembled July 13-15 at Shannonville Motorsports Park for the VRRA’s Summer Classic. Despite the very hot and humid weather, the event was well attended with enthusiastic participants from New York State, Maryland, Quebec and Ontario.

The event kicked off on Friday with an endurance race hosted and organized by R.A.C.E.  Seven teams competed in the gruelling 2-hour event. The lead went back and forth as riders switched and refuelled but eventually the team of Pierre Rochat and Miguel Lebeau riding a 2002 SV650 beat out the others to win on an exciting last lap pass. The win was notable for Miguel as he is just 17 years old and this was his first race ever. Miguel also competes as a passenger on a Rotax-powered, 2 stroke, P3 sidecar rig piloted by his father.

Heat races on Saturday were aptly named as the temperatures reached the high thirties and made racing in full leathers a challenge. Club volunteers and CRCA officials also had to endure the oppressive environment, often without any shade. The club showed it’s appreciation to the CRCA marshals by hosting a barbeque in their honour on Saturday evening. 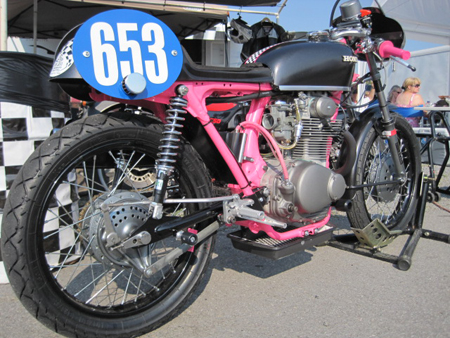 Riders unfamiliar with Shannonville’s Pro Track needed some time to adjust to the configuration, as most are familiar with either the Nelson or the Long Track, but the venue provided an equal challenge for all riders with its medium 2.47 km length and 9 corners. The best lap time of the weekend was achieved by VRRA Vice President Don Gosen on his Ducati 900 SS at 1:13.882.

Sunday’s finals provided lots of exciting contests and close finishes. Some club members run lighter 2 stroke machines including some very well prepped GP bikes that are competitive against the newer 4 strokes. In some cases, lap times are similar to modern bikes.

“Try The Track” sponsored by Pro 6 Cycle also ran at noon on Sunday with a full roster of eager passengers signing up for laps on track as a sidecar passenger.  Excitement ran high as participants displayed emotions that can only be described as “wildly enthusiastic” as they came off the track. The popular program that lets street riders experience the racetrack at a controlled pace in either a sidecar or on their own bike, will run at all VRRA race rounds this season.

The next round of vintage racing happens August 17, 18 and 19 at Canadian Tire Motorsports Park (Mosport). The event is the largest and most exciting of the season with lots to see and do. The Canadian Vintage Motorcycle Group will be there with beautifully restored motorcycles on display, manufacturers with the latest new bikes available for demo rides and of course, nonstop racing all 3 days. Check out the schedule at www.vrra.ca.

What’s the deal with Coconut Water?