VRRA Round 2: The Highs and Lows of Vintage Racing

On one of the hottest weekends of the year so far, the enthusiastic racers and fans of the Vintage Road Racing Association gathered at Shannonville Motorsports Park for the annual Summer Classic. With some great highs and some extreme lows, racing was as fierce as ever on the 1.8 km Nelson circuit.

The event had its mishaps. Inside Motorcycles and the entire VRRA family send their best wishes and most positive thoughts to the racers and families struggling with recovery.

Despite the delays and red flags, the racers put on a fantastic show. The Period 3 Heavyweight race was a nail bitter!  Z1 Kawasaki vs Katana vs XS650. It was a great race, but in the end the Whyte Racing Z1, with racer Dominic Aubry at the helm, took the win. The P4 (83-89) Vintage Challenge saw some great position swapping, with Colin Duncan’s ZX-7 finishing first and Keith Louttit’s MBP Ducati 900SS second. 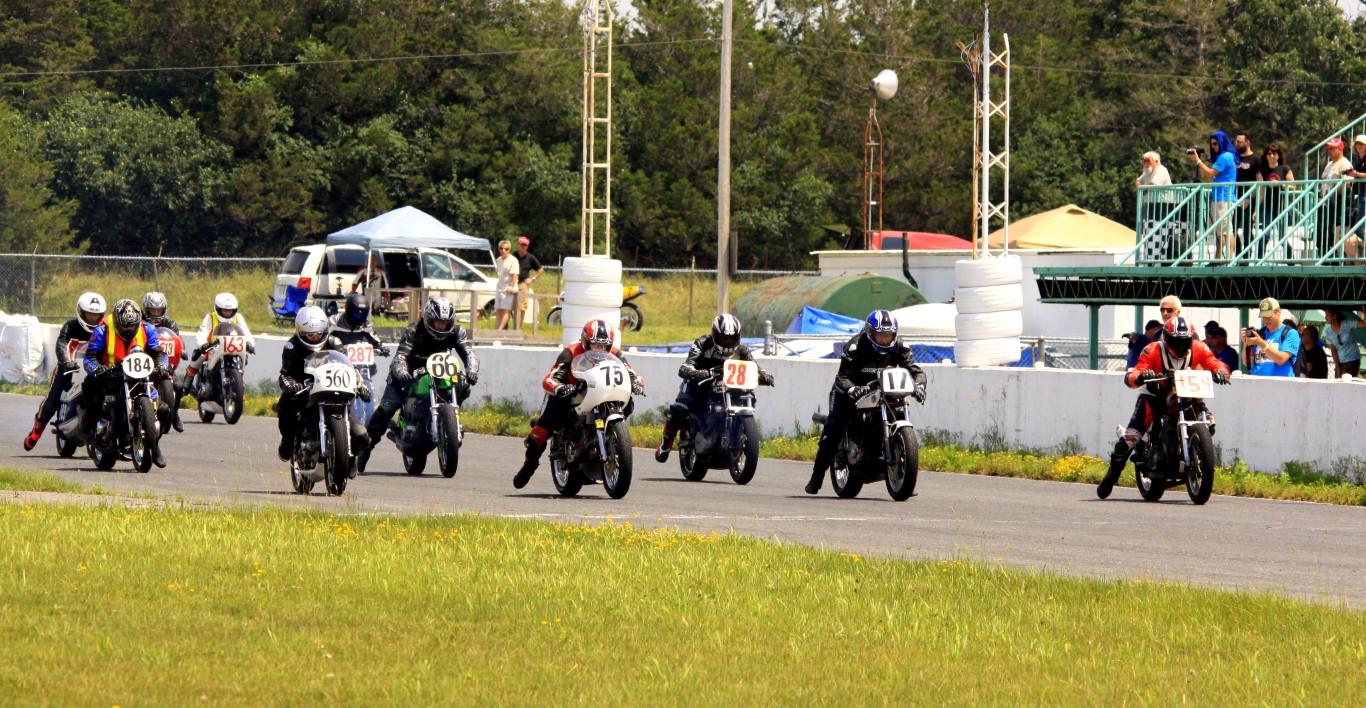 Sunday got off to a late start, with the final races being shortened to 8 laps from their usual 12. The Period 3 Lightweight race had the Newbury GPZ550 in a great match up with Bill Quail’s Yamaha SR500. Lee Newbury took the win on a bike completely prepared and maintained by his dad, Fred. Two Period 4 classes (light and middleweight) had very fast lap times, with Jody Pearce taking the F3 win and David Percival winning F2.

The Middleweight Production race had Paul Brubaker’s production racer on top of the box both days, with Quail’s #711 in second place and KH400 two-stroke racer Roger Belanger in third. All three bikes are beautifully prepared by their riders and they put on a great show. Vaclavik, Mislbachner and Madrus had top honors in Period 2 Heavy, also on fantastic bikes prepared by their riders. 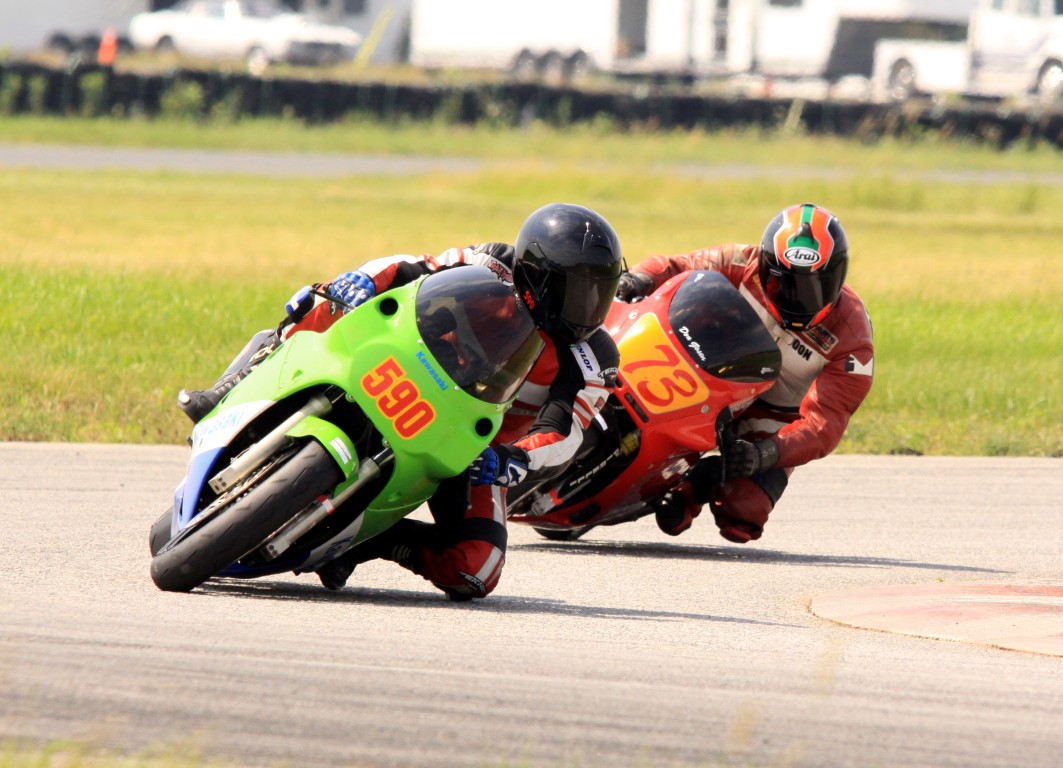 Craziest of all was the sidecar final. Minnett, Gill, Vinten, Holden and Robinson were pushing, drifting, shoving, and bumping! The first two thirds of the race were absolute mayhem! Dave Minnett took the win, but Mathew Gill and VRRA President Mike Vinten really tried to have their way with the lead sidecar. Gary Holden’s rig put on a fabulous show. 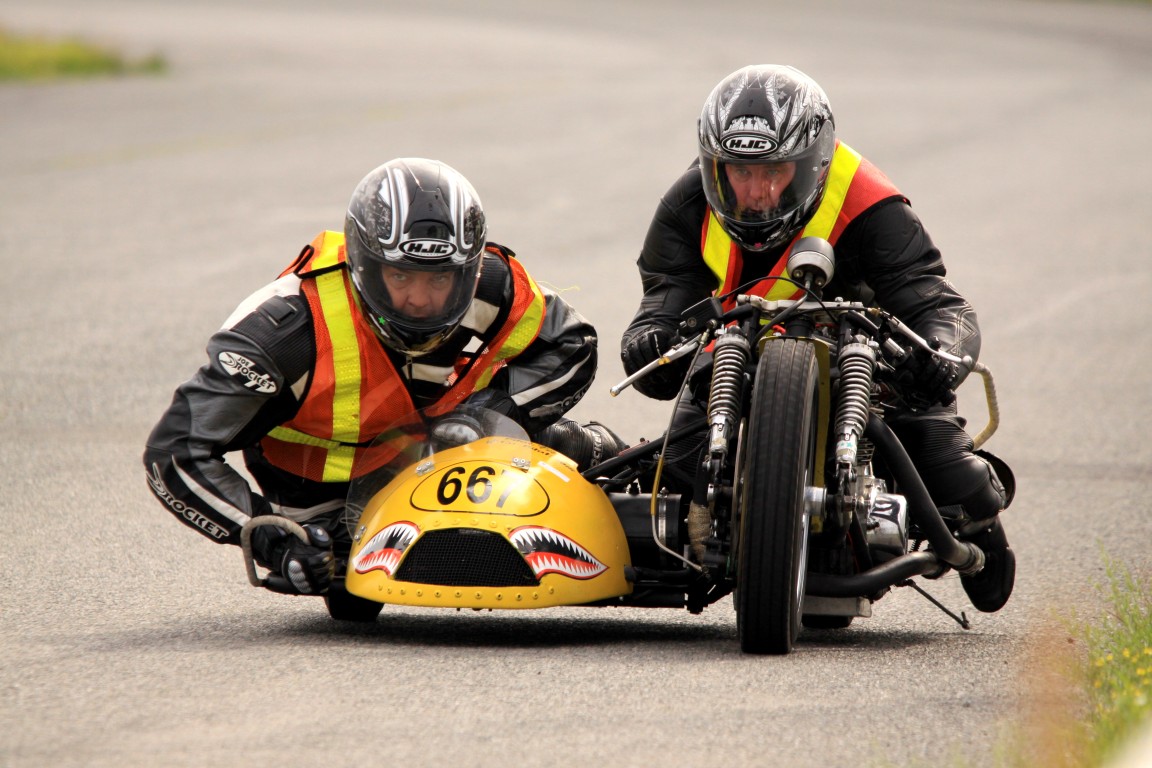 Rookie Sidecar racer Vic Smith and his monkey had a DNF in the final, but loved their weekend and their new VRRA family.

The Vintage GP was also a great highlight to the weekend. This new two-stroke class highlights purpose built, production race bikes. Percival and Humphrey took top spots in their classes.