Vandereyken Looking to Improve in 2013

by Graeme Jones
in News
0

Pro Bike rider Dave Vandereyken is hoping for more success when he takes to the track in the Pro Bike & Sled Series presented by Wiseco Performance Products this season.

“We’re not doing too much new to the bike this year,” he said, “but also for this year we’ll hopefully go faster.”

Riding his 1982 Suzuki GS1100E, which is capable of going down the quarter-mile in just nine seconds at 130 mph, Vandereyken qualified for all PBSS events he and his Animal Racing Team entered in 2012, but had problems making laps.

“We had some shifter issues last year,” he explained. “I’m sure we have those now worked out.”

The Suzuki runs on a modified factory chassis with a 1540 cc engine and Slider carburetor between the frame rails with a five-speed transmission. Racing since only 2010, Vandereyken placed 10th in the PBSS last year. 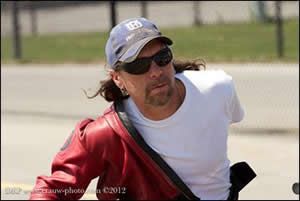 Aside from Vandereyken doing the riding, Louise Reid is crew chief for the team. Sponsorship comes from Halton Power and Koojo Powder Coating.

Vandereyken added he enjoys racing in the PBSS, and hopes to get to all the events if possible. And whatever events he gets to, he plans on enjoying himself at the race track.

“I really like the series,” he said. “I go there to have fun and ride my motorcycle.”

Eugene Laverty leads the way on Friday at Aragon

Eugene Laverty leads the way on Friday at Aragon