by IM Admin
in Andrew Trevitt
0

As with any setup decisions made at the track, it’s nice to have some data to look at to confirm what the rider is saying or even make a change with no input required. A rider may say that he needs taller final gearing after a session, but with some basic data it’s easy to actually put a number on how much taller to go – this can help save some significant setup time at a race event.

RPM is the most useful channel to use here, and data acquisition systems usually provide an input that accepts a tach signal. Using rpm alone you can check maximum rpm on the longest straight on the track, minimum rpm in each corner, and see how the rider is using the gearbox over the course of a lap. These are details that I mentioned in my last blog and in my article in the current issue of the magazine, but with actual numbers you can calculate the exact change in gearing required.

Another way to get a nice overview of how the engine is being used is to look at a histogram of the rpm data. A histogram graphically shows the percentage of time that rpm (or any data) falls within a set range; AiM Sports Race Studio 2 Analysis package, as with many acquisition software programs, has a histogram feature and is used here.

Another option is to export the data to Excel and use its histogram feature. Note here that rpm is most often in the range of 13,750 to 15,250, which is ideal for the motorcycle in use (a Yamaha YZF-R6) as its power peak is in that range. Note also that the general shape of the histogram resembles a dyno chart, although turned on its side. Any deviation from this shape – for example, if the most used range of rpm is right at the top of the scale, or if there is a large zone of use below the power peak – can indicate that a gearing change is required.

With an rpm signal alone, it can be difficult to decipher exactly what gear the rider is in at any given time (and sometimes even the rider has trouble answering that question…) and having a “gear” channel that displays this information is very beneficial. Many bikes have gear position sensors that can be tapped into for this use, but another method is to measure countershaft speed – many bikes have sensors on the countershaft for the speedometer, and this also can be tapped into.

If your data acquisition system requires wheel speed as a default input, you can use the countershaft sensor rather than using an additional pickup and sensor on the actual wheel. The ratio of countershaft speed to rpm tells which gear is in use, but this data can be put to further use. The trace comparing the two inputs will also show how smoothly the rider is making upshifts and downshifts, and it will also immediately show any clutch slip. Furthermore, with countershaft speed you can calculate rear wheel speed, and this can be used to look at slip and even more details.

With rear wheel speed and rpm, an x-y chart can be generated that replicates the chart used in the gearing spreadsheet I included in my https://www.insidemotorcycles.com/component/k2/item/753-gearing.html“> previous blog. In this format, you can see the maximum and minimum rpm used in each gear. There is additionally plenty of information in this chart about how the rider is using the engine, and any clusters of points at a particularly low rpm may need further investigation. The chart show here is also from Aim Sports’ Race Studio 2 Analysis program.

The histogram and x-y chart are not essential to determining if a gearing change is necessary, but having the data in these two formats can definitely speed up the process of making a decision and give more insight as to exactly how much of a change to make.

The histogram shown above is part of Aim Sports’ Race Studio 2 Analysis package, and shows how much time engine speed spends in each “bin” or range. If engine rpm is most often in a range other than the approximate power peak of the engine, a gearing change may be required.

Also from Aim Sports’ Race Studio 2 Analysis package, the x-y chart below plots engine rpm against wheel speed, and shows maximum and minimum engine speed for each gear. The plot density at any given point is an indication of time spent at that combination of engine rpm and wheel speed. 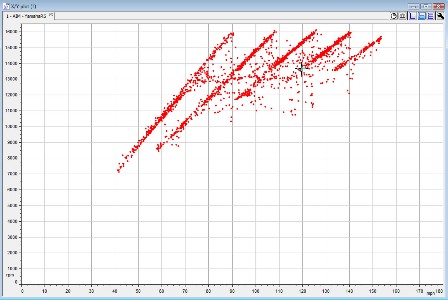