Last week I had the good fortune of checking a few things off my life’s to-do list in a very short period of time. I went to Daytona Beach during Bike Week, visited the legendary Daytona International Speedway for the first time, watched an AMA national flat track race (the season-opening Daytona TT), met a Daytona 200 winner (’72 victor Don Emde) and got to ride the all-new and highly anticipated 2017 Triumph Bonneville Bobber.

Oh, and I also got to test the revised Street Scrambler and the dangerously awesome 2018 Street Triple RS. Not a bad set of accomplishments for 48 hours in Florida!

You’ll find full reviews of all these bikes in upcoming issues of Inside Motorcycles (subscribe now at insidemotorcycles.mysub.ca), but for now, here’s a brief overview of what each model offers. 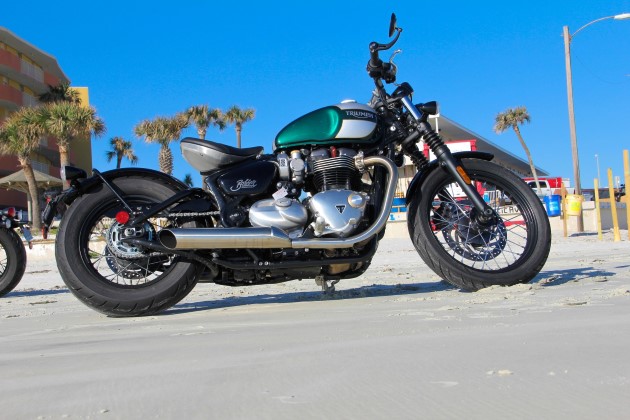 From a visual standpoint, there isn’t much to say about the Bonneville Bobber that isn’t expressed in photos. It’s just a beautiful bike, especially in the two-tone paint scheme, which features hand-painted pinstriping. The entire rear section is something to behold, with the tractor-style seat and a clevery concealed lay-down monoshock giving the bike a hardtail look. The flat, low handlebar is a stretch, literally; an accessory apehanger option is much more relaxing for extended rides and gives the Bobber a whole different vibe. 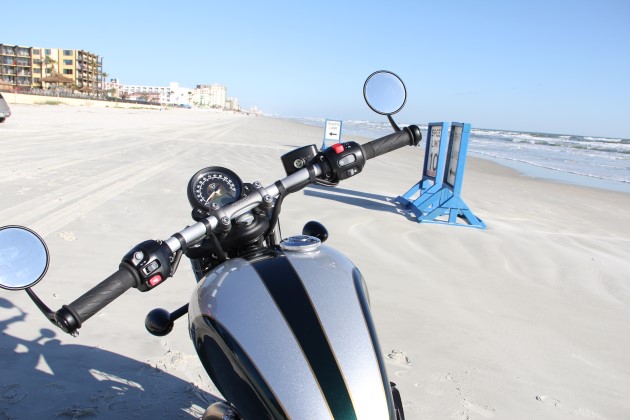 The engine is a true treat, the same meaty, liquid-cooled 1,200 cc inline twin introduced in the Bonneville T120 and Thruxton models last year. Two riding modes are standard (Road and Rain), as is traction control, ride-by-wire throttle and ABS braking. The motor has been retuned to give the Bobber more acceleration down low, but even highway roll-ons reveal the sheer muscle of this British twin. 77 horsepower (claimed) doesn’t sound overly impressive, but combined with 78 ft-lb of torque, it’s got enough jam to satisfy even the sport-minded enthusiast. Rain mode takes plenty of edge off the fuel delivery, making the throttle easier to manage. 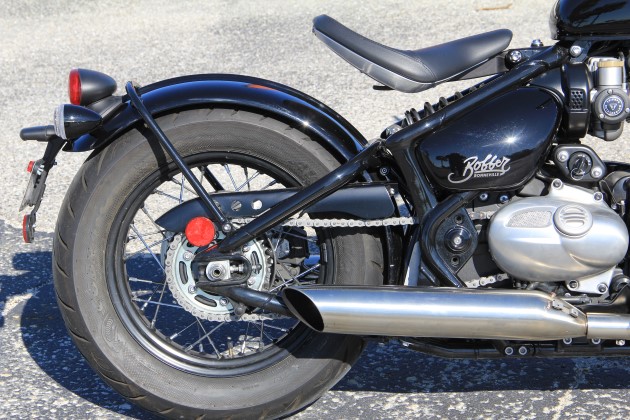 The Bobber is easy to manoeuvre and feels light, despite a dry weight of 228 kg (502 lb). The low 690 mm seat height is nice in the city, though steering lock is a bit limited. Suspension travel has been compromised for aesthetic reasons, so a harder ride is expected, but handling is on point and lean angle is more generous than I anticipated given the bike’s low stance. The clutch is light and the six-speed transmission is flawless. Given the high-performance nature of the engine I thought a second disc brake out front might have been appropriate, but the single hoops front and back still do a good job of bringing the bike down from hustle.

The Bonneville Bobber starts at $13,700, but if you want one, you better move: our sources say many bikes being delivered to Canadian dealerships are already pre-sold. 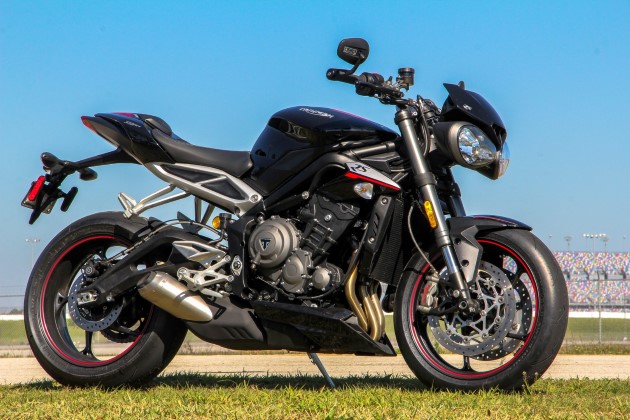 On the complete opposite end of the spectrum from the heritage-cruiser Bobber is the Street Triple RS, a naked supersport bike powered by an all-new 765 cc triple. Just a few minutes on the Street Triple confirms the notion that this truly is a track-derived sport bike without the bodywork. Thanks to visual and performance improvements – including an extra 90 cc of displacement – this is certainly the best Street Triple in the model’s 10-year history.

The three-cylinder mill is one of those engines that just sounds angry, always champing at the bit. It wants to go. Fast. Like, now. The base model makes a claimed 111 hp (up four from the previous generation), but the RS model I tested in Florida pumps out a claimed 121 ponies and 57 ft-lb of torque in a package that tips the scales at just 166 kg (366 lb) dry.

The bodywork has been tweaked for the better, and a new gull-type swingarm rests out back. The beautiful TFT info screen and on-board computer on the S and RS models are downright amazing in style and function, offering different screen layouts and a lap timer amongst many other goodies. The RS model is by all means worth the extra $2,800 over the base model for these reasons: more power, more torque, high-spec Brembo monoblock brakes, a fully-adjustable Showa big piston front fork, fully-adjustable Öhlins rear shock, a quickshifter, five riding modes (up from two on the base Street Triple), and visual bits like a painted rear subframe, standard bellypan and a sharp pillion seat cowl. 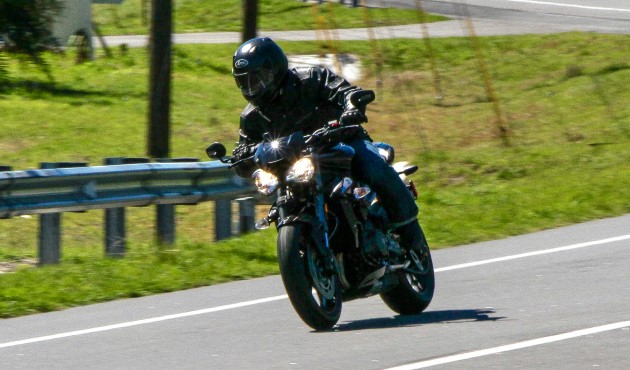 Sadly, a few hours in Daytona during busy Bike Week isn’t the right scenario to test a high-performance toy like the Street Triple RS, with the traffic and the threat of police keeping me (mostly) in check. The throttle delivery, in any riding mode, is smooth and uneventful from idle to around 8,000 rpm. It’s in the higher regions of the rev range that the Street Triple comes alive, the front end getting light and that juicy triple making an unmistakable, guttural whine as the rpms climb (redline is 14,000 rpm).

We’ll need to do some further testing – maybe even get some track time – to properly test the Street Triple RS’s true capabilities. I can’t say much about the suspension except that it’s very compliant on the street and the bike tracks perfectly. The brakes are racetrack-worthy and the quickshifter is a joy to employ. The seat feels lower than expected, and at five-foot-eight I could get the balls of my feet firmly on the ground at stops. The riding position is ideal for a naked sport bike, with a slightly raised handlebar giving the rider a slight forward lean and plenty of room to get ‘under the paint’ when a long stretch of traffic-free pavement calls. Legroom is fairly tight, moreso than a Ducati Monster or a Yamaha FZ-09, but let’s not forget: This is a track-based sport bike through and through.

The base Street Triple retails for $11,200; the S model is $12,600 and the RS will set you back $14,000. It’s quite a decent price for what is a LOT of motorcycle. Visit the link below to see the differences between the three models. 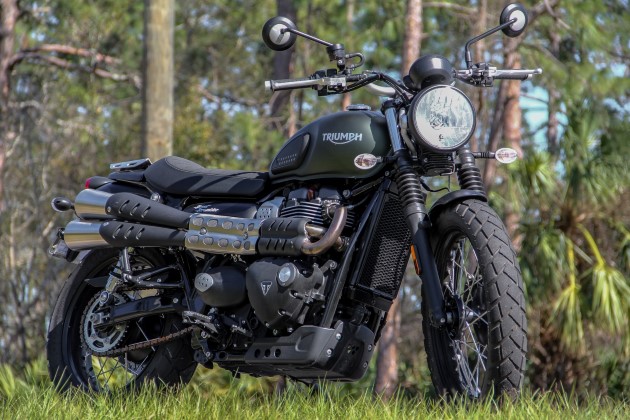 First off, the new unit is powered by the 900 cc inline twin introduced in the Street Twin for the 2016 model year. Ride-by-wire, traction control and ABS are standard,and there are many new styling cues like the interchangable pillion seat/luggage carrier. There’s plenty of scrambler-specific content here too, including rubber tank pads, fork gaiters, chunky footpegs, a skid plate, wire-spoke rims, a wide handlebar, longer rear shocks, a 19-inch front wheel and, of course, those must-have high-mount pipes and requisite heat shields. Like the Bobber, the Street Scrambler can be customized with 150 accessories from the Triumph catalogue.

Surprisingly, the Street Scrambler feels quite similar in many ways to previous-gen Scrambler models. It feels underpowered, which makes the bike seem heavy, although it really isn’t that obese – it’s just that the engine only puts out a claimed 55 hp. Still, it handles well, power delivery is very manageable and the seat height isn’t too tall. I expect Triumph to do quite well selling these to retro-loving riders who aren’t highly experienced, as it’s a very inviting platform for someone relatively new to the sport. 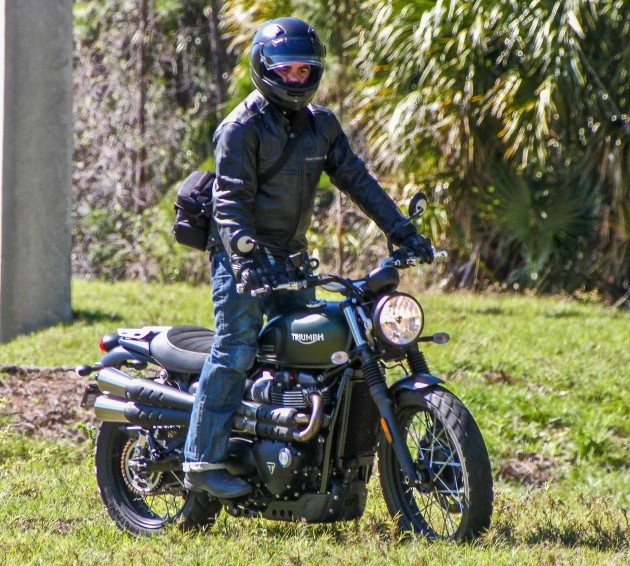 The bench-style seat has a bit of contour to it, but I found it biting after an hour of riding. Otherwise the riding position is incredibly relaxing and comfortable, with lots of legroom and wide, tall bars. The suspension doesn’t stand out either way, but the single front disc, with two-piston caliper, doesn’t slow the Scrambler down as fast as I’d expect considering the bike’s 206 kg (454 lb) wet weight – it’s 50 pounds lighter than the Bobber, but feels heavier and doesn’t stop quite as well.

But where Triumph nails it, of course, is in the design of the Street Scrambler. Out of all the bikes I tested in Florida, it actually got the most hoots and positive comments. It just looks so… cool. It’s retro, it’s fun, and the style is pretty badass. The colour options are great this year too. It’s more expensive than the outgoing Scrambler at $11,600, but there are a lot of improvements to justify the extra loot.

Triumph is doing good things right now, and in part it’s because they’ve been able to successfully build bikes in the modern era that people want to own. From adventure to sport to retro, the company from Hinckley is building great bikes at the moment, and it’s the buying public that is truly benefitting from Triumph’s quality, passion and innovation.

For the full story, including full specs and brilliant colour photos, subscribe to Inside Motorcycles at insidemotorcycles.mysub.ca