We’re deep within an adventure-riding renaissance. More and more sport riders seem to be coming to their senses and looking at their motorcycles as if for the first time. As the mist lifts, those riders are taking a physical step backwards, putting their hands on their collective hips and saying to themselves, “Man, this bike really isn’t very comfortable at all. What was I thinking?” Then they swing their legs over their hefty faired-in bikes, scrunch their knees up in order to reach the pegs, lean waaaay forward to the bars, and do their best to convince themselves that this is a sensible riding position.

As the members of this aging demographic afflicted with stiffening joints ride down the road, they pass an adventure-touring bike going in the other direction. It might be a BMW (after all, they did invent the genre) or a KTM or a Suzuki V-Strom. The rider of that other bike looks unbelievably comfortable. Admittedly, he looks kinda dorky — nowhere near as cool as the Tron-like pilot on his sportbike — but man, he’s got legroom, and there’s no weight on his wrists! “Wait a minute! Why aren’t I riding one of those?”

Well, with the advent of Triumph’s eagerly anticipated Tiger 800, sport riders — and even some sport-tourers — now have another slick new bike to scowl at in consternation.

There are two flavours of Tiger 800 — the off-road-oriented XC, which comes replete with a 21-inch front wheel and more aggressive tires to match, and the slightly more domesticated, street-focused non-XC model, which is the subject of this test. The street-oriented Tiger 800 comes with a 19-inch front wheel, which, we suppose, should be a bit better on gravel than a sporty 17-inch unit. Really though, we expect that most Tigers won’t see a single smithereen of gravel. Prospective purchasers who are likely to hit loose surfaces would probably opt for the XC model, so we’re a little skeptical about the need for the 19-incher. From our perspective we’d be happier with the sportier 17.

The Tiger 800 has the makings of a seriously entertaining motorcycle. Before even looking at the bike, we flashed back to the Street Triple we tested a couple of years back. “Why not a Tiger 675?” we thought. But rather than just plonk that Daytona mill into a Tiger chassis, Triumph saw fit to build a new motor, one with a displacement bump and more torque, but pretty much the same horsepower figures. That stands to reason, we suppose, given the Tiger’s diminished anti-social mandate. 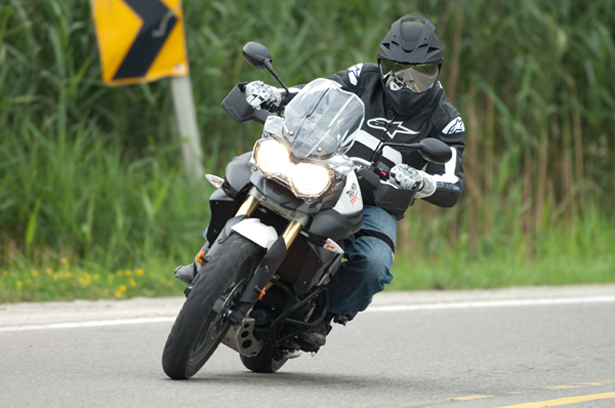 Okay, down to business. The switchgear is conventional and well placed, and the digital speedometer is easy to read. The analogue tachometer isn’t exactly a design success though – with its serif font on a blue and black background, it’s busy and difficult to acquire with the eyes. The trip meter is unintuitive and unfriendly to use – we never really did get the hang of it.

The handlebar, which is a high-quality conical unit, has a slightly odd bend to it, putting the wrists at a strange angle that never felt comfortable, no matter how we adjusted the position. We also couldn’t get the hand guards to sit properly. The guards attach to the clutch and brake assemblies, and with the levers set where we liked them, the guards ended up pointing down at about a 30-degree angle, not straight ahead where they would actually deflect wind.

Also, we weren’t blown away by the saddle. The Tiger’s saddle height is adjustable, which is righteous, but it’s dished out fairly deep, which locks the rider into one position and also puts a fair bit of pressure right on the nards. Intrepid Senior Editor Thorpe will ride on any bike, for any distance, but he recently had a vasectomy and the Tiger’s saddle made his bruised man-pouch feel like it was resting on broken glass. The pillion accommodations could also use some improvement, as the saddle back there is flat and hard, and not exactly welcoming. However as time went by, our perception of the saddle markedly changed. Did Thorpe’s nuts finally crack or was it the saddle? Who knows, but after two weeks in the saddle we ceased to notice it as much. 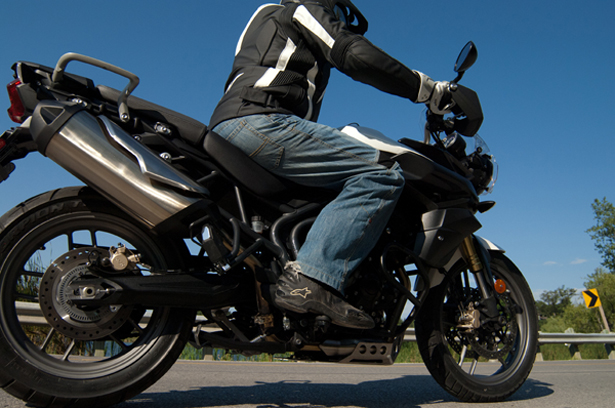 Even with the seat height set to its taller position, the Tiger doesn’t feel dirt-bike tall. A 32-inch inseam lets both feet plant firmly on the ground, although it’s a bit of a stretch. Riders with less than 30 inches to play with would be well advised to give the bike a test fit. Regardless, the Tiger is fairly narrow between the legs, which results in a straight drop to the ground. Triumph claims a wet weight of 210 kg (462 lbs.) for the Tiger, which is actually quite light, all things considered.

Clutch pull is light, with the three-cylinder motor’s abundant torque aiding in the ease of actuation. Once underway the Tiger makes it immediately apparent that this isn’t your dad’s KLR. First off, there’s that angry, fun, aggressive engine. The 800cc triple is endlessly entertaining, with its signature snarl and a slightly gritty howl. The exhaust is extremely muted, almost to the point of sounding somewhat constipated. We‘d be very interested in hearing and riding the Tiger with a slightly less restrictive intake and exhaust.

Even all bunged up in stock form, the Tiger is as barnstormer. Triumph claims 94 hp and 58 ft/lbs of torque, and we don’t doubt it one bit.  This iteration of the triple pulls strongly and spools up really nice once north of 3,500 rpm, and on the highway there’s plenty of get-up and no need for a downshift should you need to pass in a hurry. The torque peak arrives at 7,850 rpm, but it still moves out smartly on the overrev. At 130 km/h in sixth the engine is spinning at 6k but it doesn’t feel the least bit buzzy. The Tiger’s engine feels very comfortable on the street, and we didn’t have the slightest desire to plonk it around off road. We’re a touch skeptical about how this motor would fare in the off-road theatre –despite the huge amounts of torque north of 3k on the tach, the bike revs up really quickly when it comes on the pipe, which won’t be of much help in slippery conditions.

The front brake requires slightly more lever effort than optimum, but lever feel is reasonable and there’s plenty of stopping power on tap. The rear brake doesn’t lock up, and feel is reasonable, which is about all you can ask from it. Our tester came with the optional ABS, which adds $900 to the purchase price.

On the logistical front, we averaged around 280 highway kilometres before the fuel light came on. At 300km it took 14.8 litres of fuel, which works out to a most frugal 4.9 l/100km (48 mpg). And considering that the tank will accept a total of 19 litres, there’s a healthy reserve lurking inside the tank.

Steering lock-to-lock range is slightly limited, which can take an unprepared rider by surprise. We didn’t drop the bike, but there were some tense moments on the first couple of U-turns. 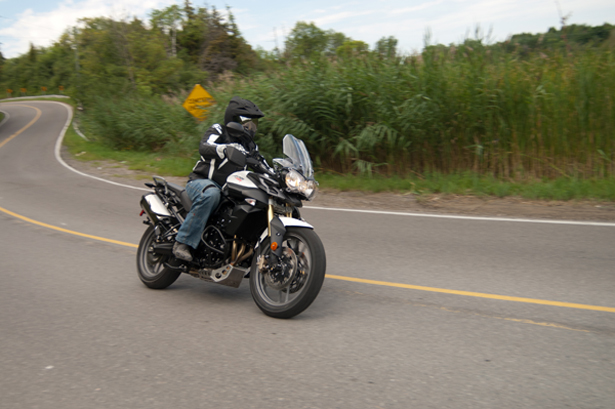 We weren’t keen on the Tiger’s heat management. The motor puts out a fair bit of heat, and you can feel it on your knees and shins. The bike doesn’t grumble or overheat, but man, can you ever feel it on a hot day. The fairing deflects the wind with only a little buffeting, and straight line highway cruising is an exercise in stability. We’d hesitate to describe the Tiger as nimble, and it needs a solid push on the bars if you want to change direction in a hurry. Perhaps that 19-inch front wheel is the culprit here.

The Tiger’s best feature? It’s a tossup between that spanking three-cylinder engine and the suspension, which is just wonderful. There’s no question that Triumph got both ends right on this motorcycle. At first glance the specs don’t give any suggestion that the Tiger’s suspension would work as well as it does, but the non-adjustable forks and shock are unbelievably composed. Both ends are sprung for the road with little dive under braking, and the bike doesn’t wallow when pushed at a sporting pace. Initial travel is plush but it firms up progressively when needed. Square-edged impacts don’t make it through to the wrists and there’s only the slightest suggestion of harshness on the very hardest hits. We reckon that the Tiger will work just great for any rider in the 180 to 210 lb range.

Now there is one caveat to the Tiger’s design and you’ve gotta have a keen eye to pick it out beneath the bodywork. Probably to reduce production costs, the bracket supporting the headlights and the rear subframe that supports the seat and tailpiece are welded solidly to the frame. These parts are usually bolted on, making crash repair less costly. Bend either of these parts on this bike — even in a minor spill — you’re looking at costly frame replacement.

In some ways we’re being a little harder on the Tiger than we should be. We’re holding the Triumph to a high standard because it’s such a damn good all-round street bike. Although it pretends to have dual-sport capabilities, it’s really more of a well-disguised sport tourer. That juicy motor combined with outstanding suspension components encouraged us toward the kind of extra-legal tomfoolery better suited to the Speed Triple. The Tiger eats up twisty roads and off ramps, and handles city combat duty with extreme confidence. Every time we climbed aboard this bike it just made us smile. And that’s really the highest praise we can give to the Tiger – it made us want to ride it, and ride it hard. 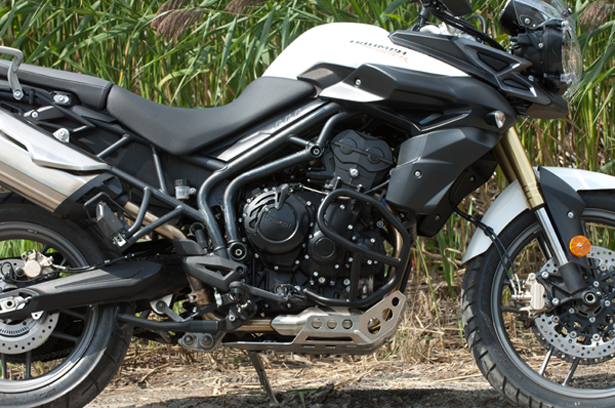 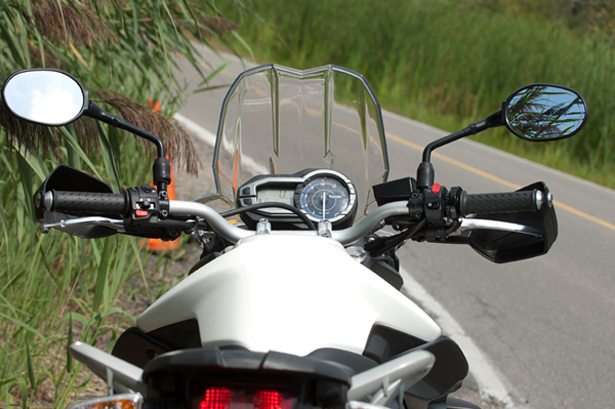 Review: GoPro Hero2 Takes Action Video to the Next Level