Trials in Tolmezzo – The Other “des Nations”

What started off as a friendly bet involving two regular WEC Champion rivals, ironically Team Canada’s Trials des Nations teammates, turned into an east VS west battle for hockey supremacy. There was a lot on the line, not only was there a week’s worth of bragging rights, but a skimpy pair of Canada bikini bottoms the loser would have to wear on their first day at the prestigious Trials des Nations, in Italy.

Jonathan English from Belleville, ON, puts his money on Boston, while Will Duggan from Cowichan Bay, BC, his home team, the Vancouver Canucks. Game seven of the Stanley Cup Playoffs finds English the victor and Duggan the defeated. Jon, not one for letting things slide, arrived in Italy early and left Will his new garment, laid out perfectly on his hotel room pillow.

“Here we were, arriving, totally bagged, at 2am, after attempting to use public transportation across Italy, with no Italian in our repertoire, to find these bikini bottoms on my bed. So I decided to wear them down to breakfast and into the pits on practice day,” laughs Duggan.

Team Canada’s hotel was located just a few short kilometres from the event, in Tolmezzo. The hotel was overrun by our Canadians, Aussies, Americans, and Irish. You can imagine their surprise as Duggan wolfed down his breakfast croissant and cappuccino in his new attire. “I figured I could use it as an intimidation tactic,” smiled Duggan.

The 27th annual event was held in Tolmezzo, Italy, a small, quaint town located in the province of Udine located at the base of the Strabut Mountain on September 18. This team event is an observed motorcycle trials competition organized by the Federation International Motorcycling (FIM) and has been held since 1984 in many different countries. 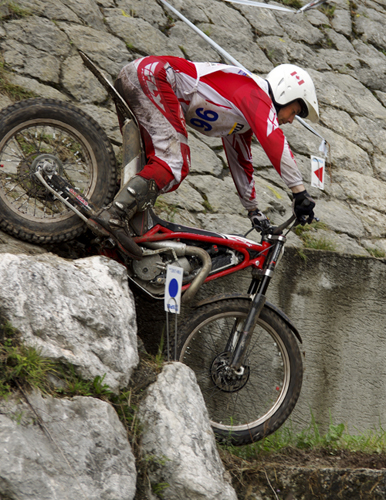 Each country is represented by four of their very best riders. “Being selected to ride for your nation is a true honour and I am very proud to be able to ride for my country,” says four-time TdN rider English. The riders compete together, instead of as rivals, to combine a score at the end of the day. The team with fewest total penalties is awarded the title.

“Team Canada worked really well together, we were able to plan our attack and strategize,” says WEC Champion Duggan. “Our support group was immense, we had great minders and timers out there on the loop, friends and family making sure we were well fed, watered and cheered for.”

This particular event was laid out in and around the town of Tolmezzo including rough rocky rural hillsides mixed in with stadium-like urban terrain. The challenging loop included 18 sections that were to be completed within the seven-hour time limit. Meandering through the streets of this bustling town amongst the cars and scooters, the riders navigated the loop laid out for them. Any second over would result in penalty points.

Saturday morning arrived early as the riders picked up their motorcycles and set straight to work making minor adjustments to their equipment. Blasting halfway up the mountain, the practice area was waiting to see how our Canadians would adapt to the terrain. Most of the team was no stranger to this level of competition. Fifteen-time Canadian National Superbike Champion, Jordan Szoke, has been earning his living racing at home and overseas, making Tolmezzo his seventh TdN experience. Jonathan English has represented Canada four times in total, and Will Duggan made Italy his third trip overseas. The only first-timer was D’Agris of Victoria, BC, although he was the youngest on the team, he brought nine years of Observed Trials experience and adapted quickly.

“At first it can be intimidating to see all the high levels of talent over in Europe,” comments Duggan. “You’re used to being the best in your country and then when you compete with the best from all over the world it can be a bit overwhelming. Once you step up to the plate and make it happen, it can really boost your confidence and remind you why you were selected to represent your nation in the first place.”

Saturday afternoon gave the team an opportunity to walk the sections together to select their lines and plan their team strategy. Strict rules apply during this time as you cannot ride the section before competition, only walking through one team at a time on foot is permitted. There are observers at each and every section enforcing these rules. “The sections may have been laid out a little bit on the easy side.” says Szoke. “ I liked the terrain, anytime you find yourself enjoying the mountains in Europe you can’t complain, although I would have liked to see some bigger splatters in there instead of all the technical off camber turns.” 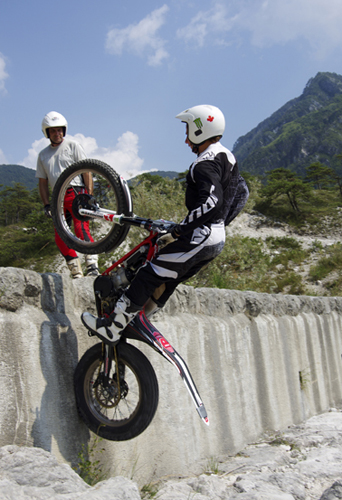 “I would have liked to see some bigger hits too which would have suited our team’s riding preferences better.” agrees English. Szoke and English enjoy training together at home in Ontario when their busy schedules permit. English flies with Air Canada as a pilot, and Szoke is our seven-time Canadian Superbike Champion, both make certain to find time where they can to ride and enjoy the beautiful terrain offered in the Canadian Shield. D’Argis and Duggan also ride regularly together at the stunning Victoria Motorcycle Club and are very acclimatized to high step ups and slippery, skilful terrain.

Team Canada found themselves one of the earliest teams out on Sunday morning to meet their first group of sections. They arrived just in time for the thunder and lightning storms that were predicted. “The organizers must have known it was going to rain on event day because they laid out the sections accordingly,” comments Szoke. “If it would have stayed dry, you would have seen a lot of really low scores.”

The torrential downpours created a serious challenge to our riders as they navigated through the first slippery loop of two. A flat tire on Duggan’s bike almost puts Team Canada behind in time. Heedful minder Chris Duggan sprinted a kilometre down the slippery mountain to pick up a spare rim and tire. Quickly he throws it under his arm and lugs it back uphill to mount it on his brother’s bike, barely wasting any time. “Our minders were amazing,” comments Duggan. “It was pretty special to have my brother working there with us, he launched himself off a cliff many times to catch us and considering the conditions, we had him busy.”

Navigating to the sections was a severe challenge as the steep, slippery terrain made it almost impossible even to walk. Spectators were sliding down the hill on many occasions. Regardless of the weather, there were hordes of people lined up pushing back the tape barriers at every section boisterously encouraging the riders navigating the obstacles. “The Italian fans are so knowledgeable, they would be cheering us on like mad through the rough sections where we were struggling to save a three,” says English.

Equipment failure once again threatened our team with time penalties as Szoke wallops a splatter and destroys a series of rear spokes. With time ticking he blasts back to the pits for a replacement while his teammates wait with baited breath. Szoke returns to his team discouraged. The only tire that was mounted to a new rim was worn badly. Thankfully, working together as a team would still keep Canada in the game as the individual scores are collected and tallied together for the end of the day.

The arrival times our team had to the sections, and the way the weather played into it, affected them a bit more than they anticipated. Timing was everything with the weather and sometimes they may have gotten the short end of the stick. Not to be deterred, every rider put forth some stunning rides to the delight of the fans, along with the friends and family that faithfully followed their boys from section to section. “The wet conditions sure made a huge difference, the clay like properties made the dirt pretty slippery, and once that was dragged up onto the rocks, traction didn’t exist.” said Duggan.

Team Canada finished the event 13th overall with a combined score of 339.

Team Canada would like to thank their minders: Chris Duggan, Jon Nelson, Sarah Duke and Louise Forsley for keeping them safe and on time. The fans and supporters assisting in all the fundraising activities and the CMA for supporting their trip. Bob Billyard and John (Boots) Searle for their managing and organization. Rebekah and Sonia for their support and sandwiches. And lastly all the friends and family that were able to join us overseas and cheer them on.

To learn more about observed Trials in Canada visit: www.trialscanada.com