This summer, our editor asked me if I’d be willing to put the 2012 BMW S1000RR through its paces on the race track.  I argued for awhile, then reluctantly agreed… Yeah right!

Shortly after, I was at Calabogie Motorsports Park with the sleek BMW for a Pro 6 Cycle-hosted  track day.  Pro 6 always provides a safe and well-run track day, at what just may be the nicest race track in the country.  Calabogie offers superb tire grip and smooth, consistent pavement, allowing traction no matter which line you select. 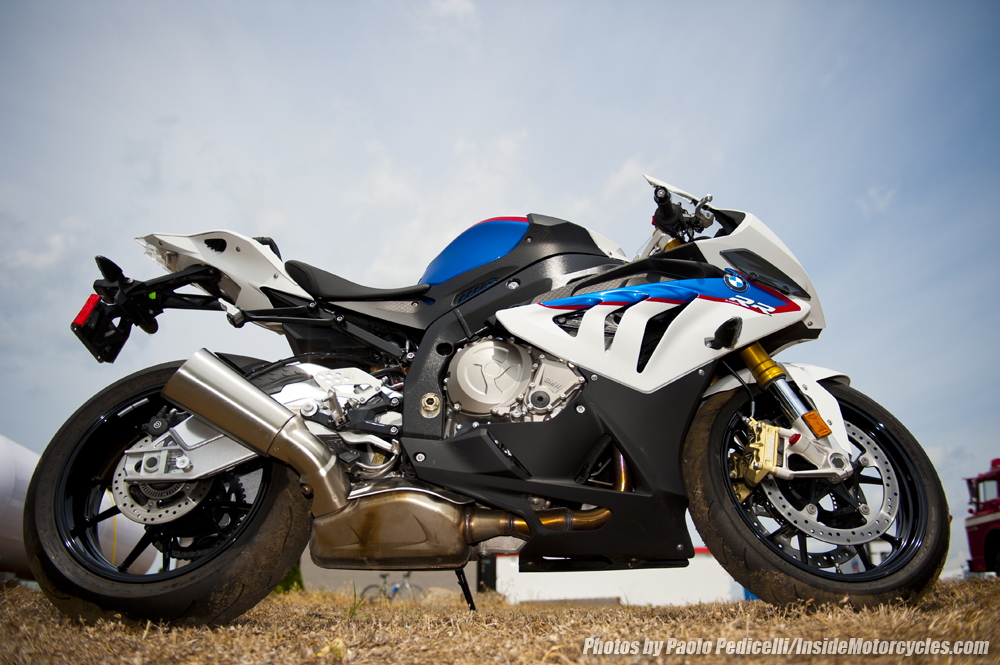 One thing you need to do before riding the BMW is to RTFM (read the f—ing manual!).  This bike, with perhaps the exception of the new Ducati Panigale, is the most technically advanced sport bike available to the general public when it comes to electronics.  The bike has the BMW Motorrad Race ABS braking package as well as a very advanced Dynamic Traction Control (DCT) system that incorporates a bank angle sensor that monitors how far over the bike is leaned to help predict grip, a wheelie control system and a launch assist system.  Also included stock is a Gear Shift Assist quick shifter to permit up-shifts without needing the clutch.  The sensitivity of the traction control system is adjustable by operator selected modes — Rain, Sport, Race or Slick — that permit varying degrees of traction control intervention depending on the operator’s skill level and pace.

As I prepared the bike for my first track outing, I realized that the shifter cannot be quickly inverted for race pattern.  This probably won’t bother 75 percent of track day riders, but current or ex-racers who have ridden GP or superbikes may have tried and indeed fallen in love with race pattern.  I taped up the lights with clear packing tape and headed out for my first session. 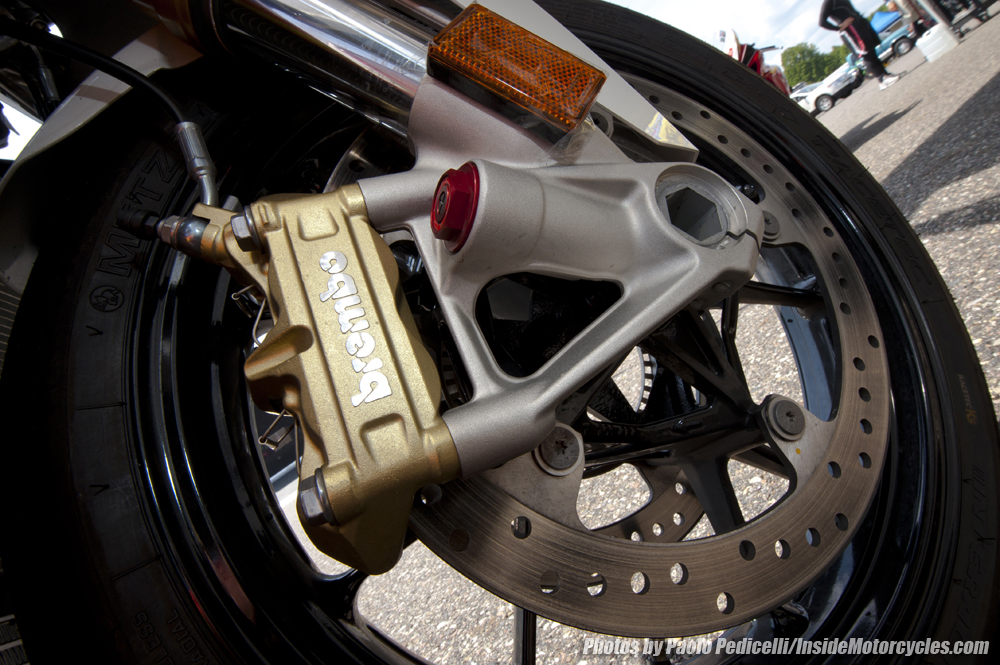 Heading out on track, the most impressive feature of the BMW S1000RR was the brakes!  Yes, I was surprised, too — a bike that puts out a claimed 193 bhp had me most amazed by its brakes! But let me summarize: the engine is so strong and so linear in its power delivery that it actually feels slow.  With the constant assistance of the electronics, it is a gentle beast in terms of its driveability.  It doesn’t spin the tire (which can cause the rear suspension to pump), and when it doesn’t spin the tire, it doesn’t grab and wheelie like some bikes, so the straights are happily uneventful.  But when you arrive at your braking marker at 240-plus km/h and grab a big mitt full of Brembo brakes, the bike squats down and digs into the pavement, decelerating at an incredible rate without any distraction.  I couldn’t figure out for a lap or so why I seemed to be braking too early, as I was using the braking markers that I use for most litre bikes. The difference was that the BMW just decelerates so much better, so I ended up at my turn-in point at a slower speed than I am used to. 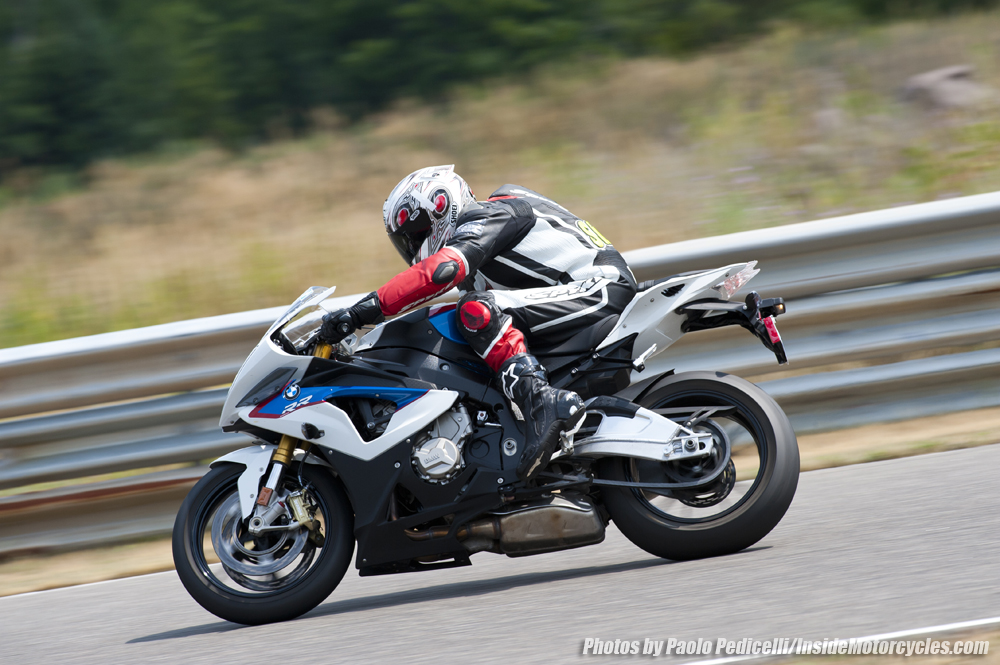 The second thing that caught my attention on the S1000RR was how stiff the chassis is.  Being a humble journalist, I had never had the experience of feeling chassis flex, always assuming this was left to the “gods” of MotoGP. But apparently not. Due to the incredible reaction time that the chassis displayed, I was able to sense the flex through any movement on the bike, whether it be a push on the handlebar, or a press on a foot peg, both of which resulted in an immediate change of direction.  Most bikes allow you to sloppily shift your body position around without any resulting change of direction in the bike, but the Beemer reacted instantly.

If a bike has really soft fork and shock springs, it will tend to absorb your input through suspension movement when you initiate a turn, then gently feed it back into the tires when the suspension responds, delaying your turning response.  Sometimes you will feel an improvement in a bike’s reaction time when you change tires from a soft sidewall tire to a firmer sidewall tire, but that is different than what I was feeling on the S1000RR. 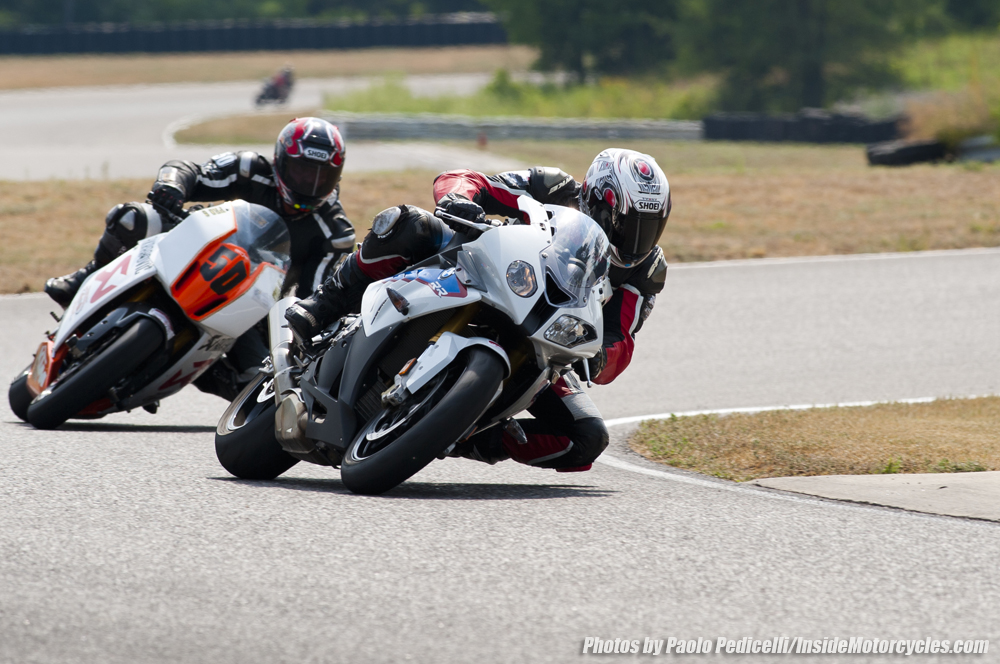 My first outing was a nice little shakedown session, as I had to get used to the deceptive power delivery, which got you to the next corner faster than you suspected.  Then I had to correct for the incredible linked braking system, which slowed you down so much more uneventfully than you thought it would.  Not only was the whole package new to me, but the tires were a question mark as well.  One of the new anomalies of having a bike with traction control is that it can mask a poor tire by the use of electronics.  A smooth, uneventful corner exit could now be attributed to the slick operation of the TC, and not the fact that the tire is gripping well. The stock Metzelers on the S1000RR are a great entry-level DOT track tire, but would step out sideways when pushed really hard, a motion no amount of traction control will stop.  A quick check back in the pits revealed high PSI in both tires, so I dropped them down to 30/30 with a (humourously) negligible change in edge grip. 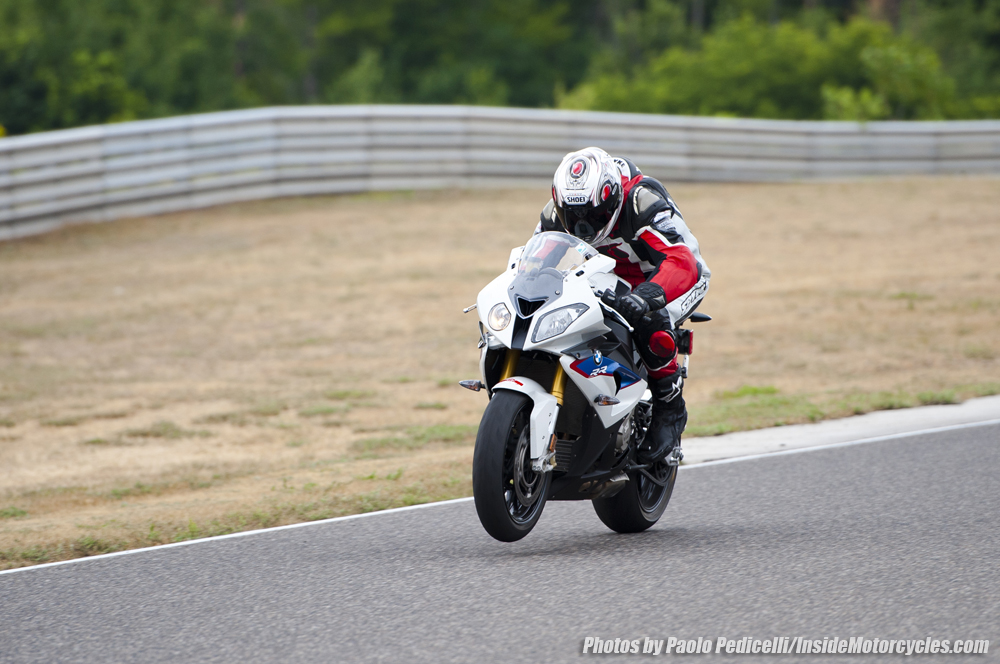 I ran a best time of 2:14.40 on the Metzelers, which is a great time for a stock bike on stock tires. We swapped a set of Bridgestone Battlax R10 DOT supersport tires on it and went even quicker — tire edge grip was improved, and top speeds were higher (consistently 241 km/h compared to 237 with the OEM rubber) as the traction control was able to get better drives coming out of bends. I cut a best lap of 2:12.30, nearly two seconds quicker than with stock rubber.

One limiting factor realized with the extra grip from the Bridgestones was the front fork.  With the tremendous brakes and relatively short travel, the fork woud literally ‘sit on bottom’ through some of the corners where you trail braked, causing a terrifying amount of feedback.  Once you felt this in a few of the corners, you stopped trying to go faster.  A better fork would be a worthy investment for the track-minded S1000RR owner.

Three thumbs up for the 2012 BMW S1000RR! Watch for the November (Vol. 15, Issue 7) issue of Inside Motorcycles where we get our hands on the brand new 2013 BMW HP4, a lighter, quicker and even more race-inspired version of the S1000RR you see here. 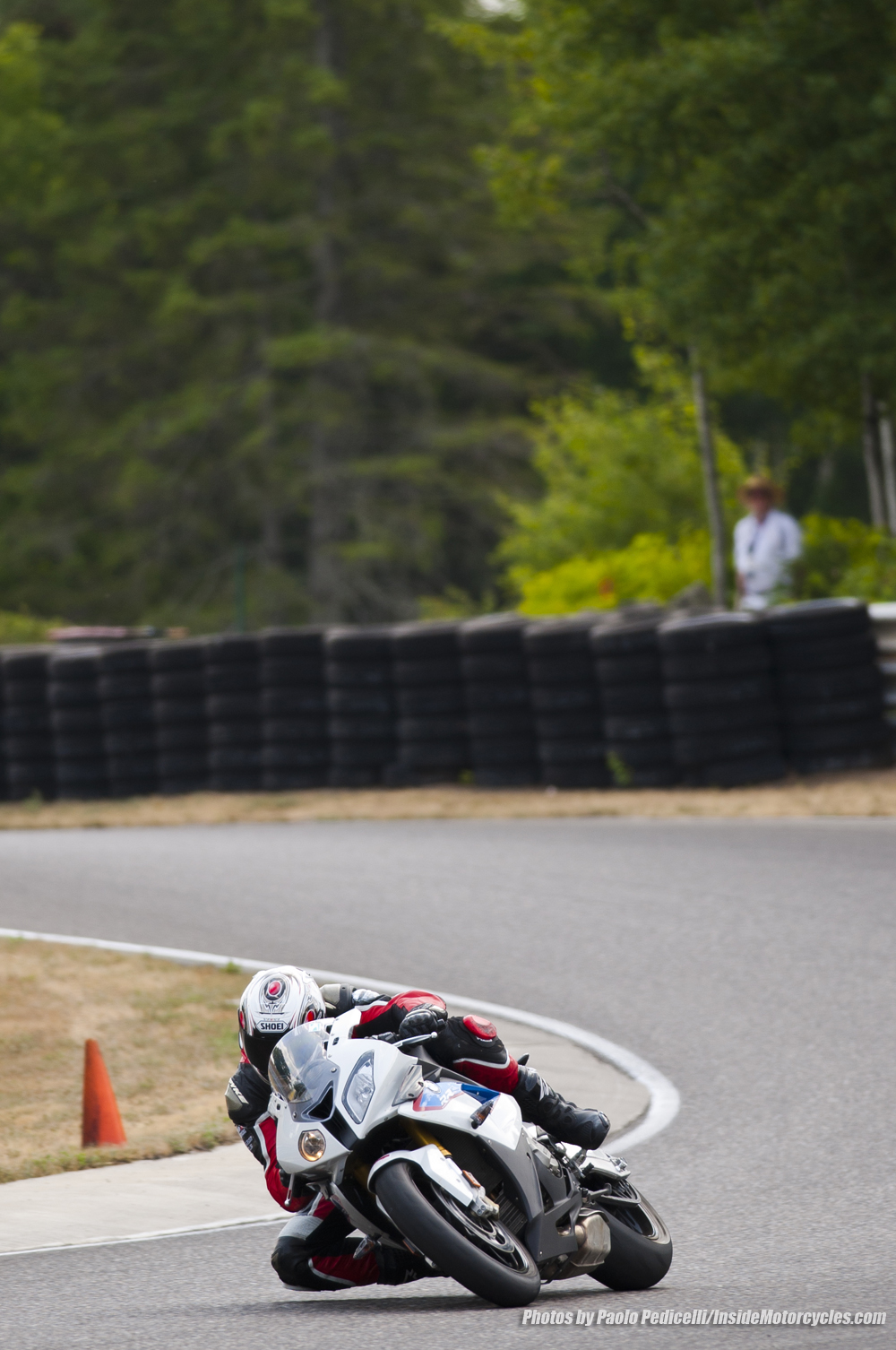 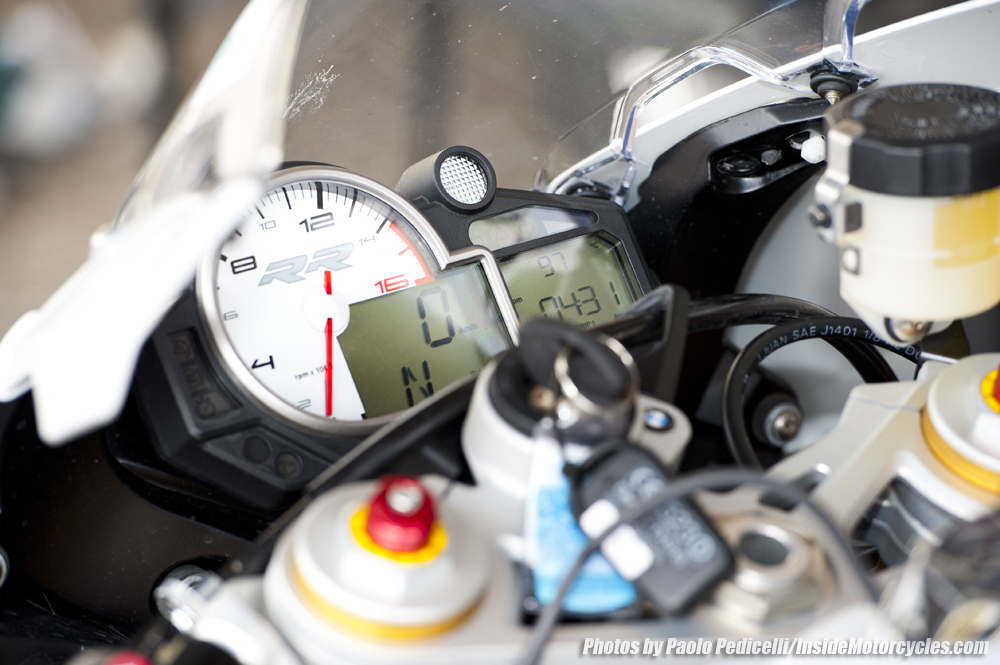 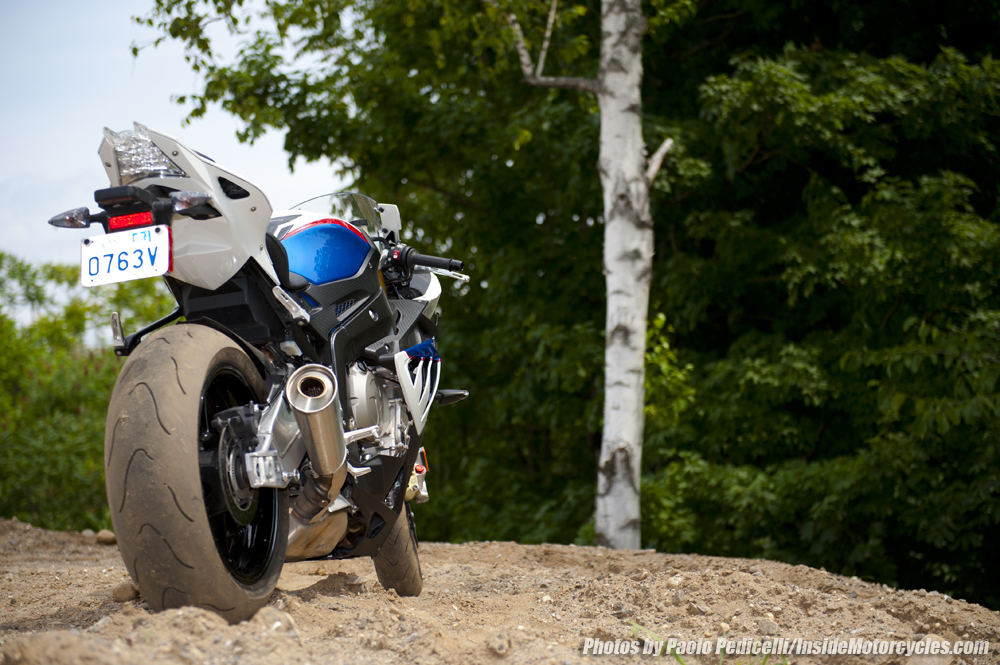 Quebec museum to be honoured

Quebec museum to be honoured