by IM Admin
in Touring Essentials with R. Bruce Thomas
0

Seeing hazards and knowing how to cope with them will minimize safety risks.

In his latest Touring Essentials blog installment, R. Bruce Thomas talks about rider vision, citing lessons learned during his first ride of the year a few weeks ago – lessons that can apply to all motorcyclists and road users to minimize safety risks all year long.

Modern motorcycles are loaded with safety features such as anti-lock brakes, traction control, tire pressure monitors, and one even comes with an airbag. In spite of all of this technology, your best safety device is your vision.

It’s pretty simple. If your vision is impaired, you can’t ride safely.

I was cruising in the left hand lane trying to work out the cobwebs on my first ride of the season. I came over a rise on the highway and immediately sensed danger. Less than a kilometre ahead of me, a pickup truck was stopped in the left side of my lane. There was something across the road and I could see something else in the ditch on the right side of the highway. I began to slow down but warily watched my mirrors and the traffic close by.

Three huge hay bales, weighing up to 400 kg apiece, had fallen off a transport truck which was nowhere to be seen. I pulled off in front of a pickup truck that belonged to a local farmer who had come across this mess about 20 minutes prior to my arrival. He had called the police and was waiting for them to arrive.

There were numerous collision opportunities in the 15 minutes I was onsite. As right lane traffic slowed, some people changed to the left lane without slowing down only to jump on the brakes once they caught sight of the obstruction. Luckily, another pickup soon stopped and a stout fellow quickly pushed the biggest chunk of the busted bale out of the middle of the road. A car pulled over and four other good-sized farm boys jumped out and helped clear the rest of the loose hay.

There are numerous lessons to be learned here.

Before heading out, make sure your visor is clean (or goggles if you wear them), including the sun visor if your helmet is so equipped. Also make it a habit to keep your lights clean so night driving is safer.

In the area of lighting, if you regularly ride at night it is a good idea to upgrade your stock lights. While some riders have installed HID lighting kits, I took the route of installing super-white headlight bulbs in conjunction with LED driving lights. One set of driving lights is on all the time to make myself more visible during daylight hours, and the second set is wired to my high-beam switch so I have more light at night. 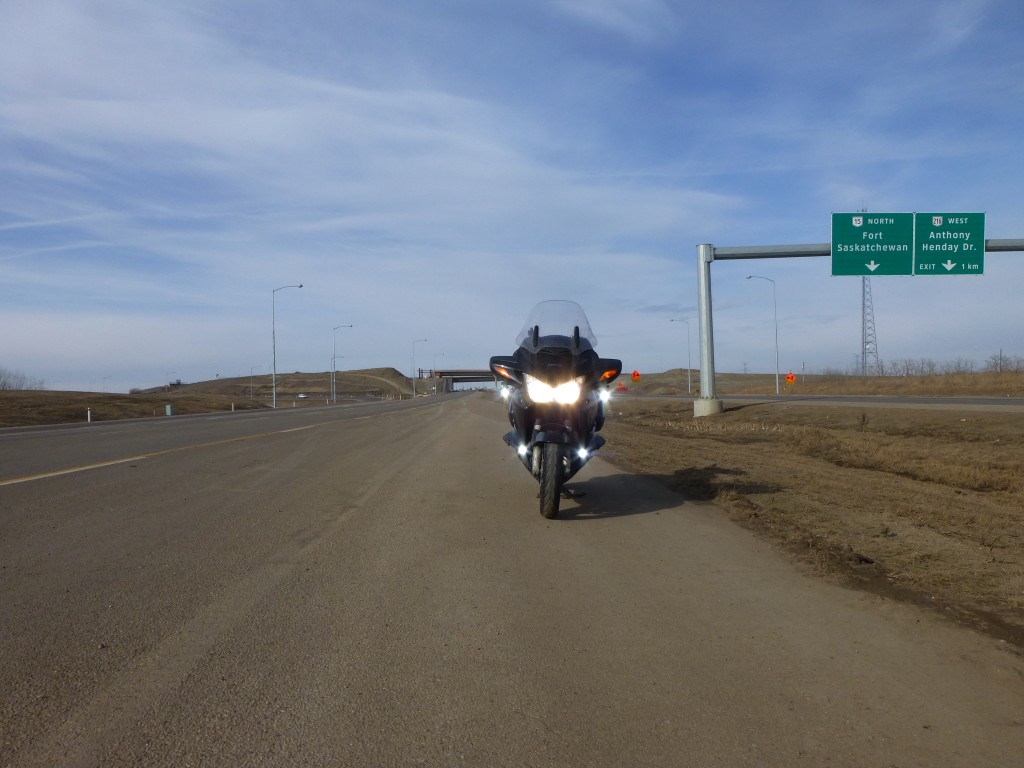 Driver training taught us to scan while driving. Regularly check your instruments, your mirrors, and the road ahead. Don’t forget to scan far, far ahead. I always try to look as far ahead as I can while driving so that I have as much chance as possible to avoid hazards.

When you come upon a hazard and have to brake quickly, always check your mirrors. There is a good chance that drivers behind you have not recognized the situation and aren’t slowing down, putting you in danger from more than just the original source. We were lucky not to get rear-ended one time when I had to brake quickly to avoid a deer that was making a beeline across the highway. In spite of my flashing LED brake lights, it wasn’t until I moved onto the centre line that the two vehicles behind us recognized something was going on and swerved toward opposite ditches to avoid crashing into us. As the deer cleared the shoulder and headed for the trees, I twisted the throttle to accelerate away from the new threats behind us.

Staying away from large trucks is another lesson. I’ve never liked those loads of hay bales as they often seem to be precariously perched. This incident proved that the load hadn’t been properly secured and the driver didn’t have a good understanding of his cargo. Another reason to stay away from large trucks is tire blowouts. I’ve seen a truck lose a rim and tire, which proceeded to bounce down the road for almost a kilometre, and we’ve all seen lots to tire carcasses on the highways. There is more than enough force in either of these events to do serious damage to a rider and their motorcycle. Get around trucks as quickly and safely as you can in order to avoid such incidents.

Last but not least, do not ride faster than you can see. If this situation with the hay bales had been encountered after dark, it is highly likely that a number of vehicles could have hit the bales as the speed limit here is 110 km/h and people usually stretch that, expecting the road to be free of hazards. Adjust your speed to the situation so you have the best chance to avoid obstacles.

Overall my first ride of the year was a great one. I put on almost 200 km of mostly highway riding to avoid all the sand on the city streets and was reminded of some very important lessons that should help keep me safe the rest of the summer.