The Vallee Report – Winter is here

Tucked away for the winter, my bike awaits warmer weather.

It seems like just a few weeks ago I was putting my bike away for the winter season. I remember at the time wondering if I should wait one more week in case I could get a couple of more rides in before ultimately deciding that the timing was right for throwing the cover on it and putting the battery on the trickle charger. Although there were a couple of days after that in which I questioned my decision, it is days like today and this past weekend that me think the bike has been put away for a lot longer than it feels. Apparently our western provinces have decided to push some of their cold air our way (thanks Mr. Lambie) and the last three or four days have been fairly bitter outside. Although I could potentially be just a couple of months away from uncovering the bike you would never know it if you took a step outside. As I spend the next couple of months watching both the calendar and the thermometer, I will be looking for other ways to get my two wheel fix.

Like many others I was looking forward to heading to the motorcycle shows this year after they were cancelled in 2021. Always a good time, for me the bike shows are a treat for the senses. New bikes, bright colours, the sound of rumbling engines and the smell of exhaust and fresh leather have become a staple in January for decades now. Hours spent bench racing, talking about old crashes (which every year seem to get just a little bit worse) and making summer plans around which races to hit usually help to take the sting out of the cold January air. Unfortunately this damn pandemic has sunk its teeth into all that is fun so for the meantime bike shows have once again been put on hold. Booooo. Shame on you pandemic.

Another thing that usually helps get me through the winter months is Supercross. A few years back my posse and I attended the event at Ford Field in Detroit and it was a great time. A night at Supercross isn’t just a race, it is dinner, drinks, a hotel room, the obligatory Supercross pool with the huge $5 buy-in and of course a pile of laughs. For decades you didn’t have to cross the border to attend Supercross as Toronto hosted an event for many years. After years of rumors that the series may not be back, the final Supercross was held in Toronto not too long ago and we just happened to be there. While there was no lack of enthusiasm from the fans in attendance, the writing was on the wall that night. For years Supercross riders had struggled with border crossings, whether due to a lack of passport or perhaps even a minor brush with the law. Because of this, the last few Supercross events in Toronto saw rider entry numbers dwindling and along with this the crowd dwindled a bit as well. While I miss the actual event itself I also miss the train or subway ride to the stadium almost as much. It was almost impossible to not bump into somebody you know on the train and even if you didn’t it was fairly easy to strike up a conversation with somebody wearing a Monster hoodie or a CR22 hat.

For now I will have to get my Supercross fix via the Supercross Live pass that I have purchased. Although not quite the same as being there, at least I can watch the races and have something to talk about with my buddies. Two observations from the opening round this past weekend. Observation one-Supercross is a brutal sport as three contenders in the 250 West series have already been taken out by serious injuries. Observation two-I am getting old which I guess is why my wife had to wake me up a couple of times during the main event. Damn you California races! 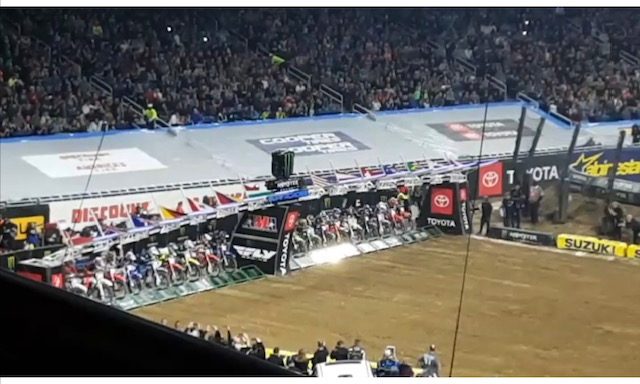 Another distraction from the cold winter this past weekend were the flat track races happening in Florida. Cory Texter put on his Winter Throwdown event and had an impressive 767 entries including Canadians Dustin Brown and Shane Scott. Many of the heavy hitters from the AFT series were there as well so the racing was top notch. Texter provided updates all weekend along with video of some of the races which was much appreciated for all the people stuck at home like myself. Watching his videos makes me hopeful that we can get a full season of racing this year in Canada after the past couple of seasons being nothing more than a guessing game. Fingers crossed!

Even though we are in the midst of a cold snap right now we are possibly just a couple months away from unwrapping those bikes for the season. Find yourself a couple of distractions and I promise the time will fly by quicker than a Superbike at Canadian Tire Motorsport Park.