The Vallee Report – The Motorcycle Wave

I am told that Jeep owners will give each other a wave in passing as a gesture to drivers with similar tastes. Rumor has it that Corvette and Subaru owners also share a friendly salute when passing each other in the streets. I have tried to make this a thing in the wife’s Corolla, but so far I have only been met by blank stares when I enthusiastically throw my left hand out of the window when I pass by another grocery getter in the mall parking lot. I don’t get it. Have these Toyota owners never heard of street cred? Thankfully when I hop on two wheels and go past another rider my ego is once again restored as we do the ‘motorcycle wave’ and all is good in the world once again.

Although labeled a wave, the motion is really generally nothing more than a quick hand signal as an acknowledgment that you are part of the two wheeled brotherhood. Most riders, but not all, will generally throw out two fingers (middle and index, please not just middle) at anywhere from a 45 to 90 degree angle as you travel past each other. There is meaning to the two fingers as it is meant to symbolize I hope you keep two wheels on the road (except on wheelie Wednesday of course). Please don’t do a full on wave. The idea is to look kind of cool as you do it. The idea is not to look like you are waving to your mom as you enter the building on your first day of preschool. Some riders can make the motion look so nonchalant while other riders seem to make it look like an awkward forced motion that seems foreign to them every time they do it. I hope I am among the first group, but sadly I have a funny feeling I may be closer to the second. Last fall I even passed a guy that was so cool it looked like he threw out a shadow puppet of a Doberman Pinscher. Still haven’t quite figured that one out. 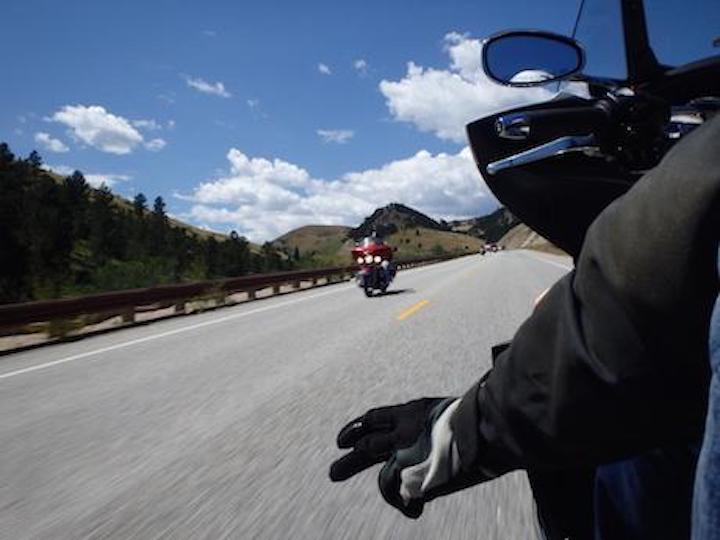 Years ago it seemed that certain groups of riders would only wave at other riders on bikes similar to what they were riding. In other words Harley guys waved at Harley guys, crotch rocket guys waved at crotch rocket guys, and so on. It seems that in the new friendlier, be nice to everyone world we live in, the wave seems to be a lot more inclusive and most Harley riders will now give me a salute as I ride past on my Suzuki. I was stunned recently when I passed three oncoming Harley riders and they all waved at me with the enthusiasm of Mickey Mouse greeting you at the gates of Disney World. Maybe it was some sort of gang initiation? You want to join Lucifer’s Stepsons, well then we are going to need you to ride around waving like an idiot all day please. Certainly made me smile. I even have the odd occasion now where the passenger throws out the wave as well. My wife really needs to step up her game. 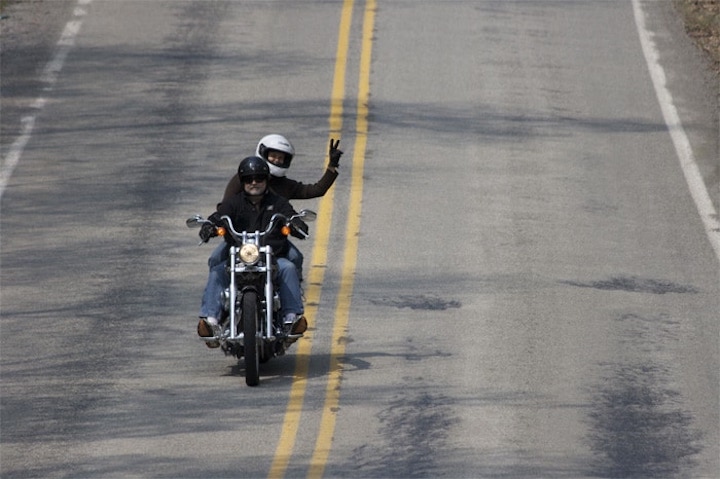 Don’t expect to get a wave when you are passing another rider on a four lane divided highway. That just seems silly. Other reasons you may not get a wave is the rider could be changing gears, heading into a curve, avoiding something on the road, checking their mirrors, or just didn’t notice you. There is also a chance it is a new rider and they haven’t had their biker wave baptism yet but of course there is a chance that the rider slipping past you is just a jerk that can’t be bothered to throw out the wave. Is it wrong that it now bugs me when I don’t get the wave? I feel like turning around and confronting the fellow rider to ask them what their problem is. I can almost see the police report now. “Sir what exactly caused this road rage incident? Well… ummmm…. he didn’t wave at me when we passed each other”. Maybe I will avoid that embarrassment for now.

I hope after reading this if you are a non-waver you will leave the dark side and come join us over here in the brotherhood. Not sure if the motorcycle wave is taught in motorcycle training courses but maybe it should be. Put bike on centre stand, check. Negotiate pylons, check. Throw out two fingered salute, check. Congratulations you are cleared to hit the road.

Heading out in the Coralla shortly to grab a few things. Going to give this one more try but if I’m not successful I’m hopping on the bike to go for a spin so I can share my coolness with all the other riders on two wheels. Flexing my middle and index fingers now so I don’t pull something.