The Vallee Report – The Motorcycle in Mexico

After a forced two-year hiatus, my wife and I recently took a well deserved vacation in Mexico. After touching down the memories came flooding back such as the warm breeze, beautiful water, great drinks and oh yeah perhaps the biggest memory-drivers in Mexico are nuts! The bus ride from the airport to the resort certainly reinforced that feeling as our driver dared to stick a bus where no bus should go and proved once again that lane markings are merely suggestions. Some vehicles constantly have their four-way blinkers on while the police vehicles as well as the potable water truck drive constantly with flashing lights on so I’m not sure how you would ever actually know when the police are pulling you over. I’m not sure if they have driving schools in Mexico but if they do I imagine they are something like this: Cover your vehicle in a light coat of Vaseline, put on a blindfold (much like Ricky Bobby), put the car in gear and then punch the gas in a full send into rush hour traffic.

If drivers of cars and buses seem a little bit crazy there, then maybe those who choose two wheels are even worse. On every two-lane road we travelled, the motorcycles would be lane splitting every time there was the slightest amount of traffic congestion. Once again, the lane markings seemed to be merely a suggestion and while on the bus I muttered “Jesus” to myself over and over again as a motorcycle would squeeze between us and another bus or car while darting through the small gap between the vehicles. Either our bus driver really dislikes motorcyclists, or he is just so accustomed to the practice but numerous times I held my breath as a motorcycle would disappear out of sight and I waited to feel the thump thump as we rode over top of it and a fallen rider. Thankfully this never happened during our journey, but it certainly wasn’t due to lack of trying from either the bus driver or the motorcyclists.
In a country of roughly 130 million, motorcycles seem to be plentiful in Mexico. Although we only saw a small cross section of the country while in Cancun, there were times as I watched from our balcony that motorcycles made up almost one out of every ten vehicles going down the road. There are most likely a few factors that contribute to this including the relatively cheap cost of motorcycles in Mexico, the fact that the climate allows you to ride them year-round and of course the obvious reason which is that apparently you will never get stuck in traffic. With annual sales of around a million units per year it isn’t surprising to see that many two wheelers on the road, but it is a far cry from the norm in Canada. 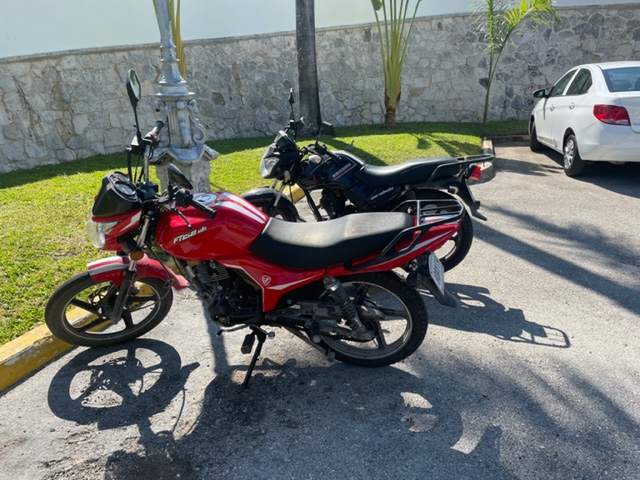 While you do see the odd Yamaha, Honda or Kawasaki there, the majority of two wheeled machines are not Japanese. Vento is a popular brand in Mexico and hands down the most popular bike is the Italika which is homegrown and manufactured in Mexico and makes up a whopping 70 percent of sales there every year. The majority of the bikes on the road are of the single cylinder, air cooled variety with most of them being under 200 cc. Most of them have drum brakes on at least one of the wheels and twin shocks on the rear are standard as well. Some machines don’t have rear foot pegs either and because of this you will see people sitting side saddle on the back. That’s right I said side saddle. I never want to be on the back of a bike and not in control, but I certainly can’t imagine sitting side saddle on one as the pilot leaned over in a corner. I did see the odd sport bike but they seemed few and far between. Cheap and slow appears to be the way to go.

Not only are these vehicles used for basic transportation, but they are used for working as well. Many of the machines have large boxes secured on the back to hold everything from pizzas to car parts as they weave dangerously through traffic. Wearing everything from full face helmets to helmets that resembled a backwards baseball hat, these riders will do whatever is needed to make sure your pizza gets to you before it is cold.

From our balcony there was a view of a nice set of twisties that set off between the ocean on the right and a large lagoon on the left. I can only imagine how fun it would be to twist the throttle on sportier machine as I leaned over and accelerated through the turns. Sadly, I never witnessed this at all as the small displacement motorcycles we saw all week putted down the road with all the enthusiasm of an XR 100 with a gas tank full of Corona. A few miles down the road from our resort you could rent Harley Davidsons and I briefly thought about doing this before deciding I really didn’t want to make myself a target out there. From our balcony I did witness a couple of renters however and it was funny to watch them stay in their lane as the locals passed them with disgust as they cruised up the middle of the road.

I will apologize for not getting some better action shots but somehow after a couple of years away I just found myself spending most of the day on the beach. Maybe next time I will get ballsy enough to rent that Harley and see how it feels to dodge traffic in Mexico. Maybe the retirement dream will come true and some day I will be working part time delivering pizza on a motorcycle enjoying the breeze flowing through my baseball hat helmet. Did you order the pepperoni and guacamole Senior?