They say that rules are made to be broken and of course that applies in the racing world as well. As long as there have been two or more machines willing to do battle in a contest of speed, there has always been the chance that one or more of the competitors weren’t exactly playing fair. The AFT is the top flat track series in the US and they find themselves in a very strange situation. Not only are they constantly trying to level the playing field in their series, there are many times when they decide not to follow their own rulebook.

Since 2017 the Indian FTR750 has absolutely dominated the top class in the series. Much like the decades long run that Harley Davidson had at the top of the food chain, on any given night well over 75 percent of the machines in the main event will sport the Indian logo and it is becoming pretty common for the FTR to grab all three spots on the podium on most nights. With the top class being labeled the “Supertwins” class for the past couple of seasons, AFT has made a mess of what is supposed to be the premier class every time the series pulls into a track. With a mishmash of rules designed to make the “Supertwins” class appear larger than life, AFT has priced most racers out of the class that is supposed to be the one that everyone wants to watch. At many events this past season the “Supertwins” class only had 11 riders trying to make the main event which is really a sad statement for the series. Basically with this scenario if you had a large supply of disposable income and even an ounce of talent you could buy your way into the top class in the series. Is there any other sport where this could happen? Can you imagine if the Maple Leafs were short a winger and all it took was a transaction on Paypal and the next thing you knew you were skating on the top line. Or maybe the Patriots are short a quarterback so you show up with a pair of cleats and a blank cheque and in no time at all you are taking snaps on my television on Sunday afternoons. Just seems a bit silly really.

As the “Supertwins” class struggles, the Production Twins and Singles classes are more and more becoming the races to watch, hardly what AFT had in mind when they developed the “Supertwins”. Most race nights the best race of the evening is in the Singles class while the Production Twins race will be a close second. Meanwhile the “Supertwins” race will many times become a parade with the usual two or three suspects at the front, most likely riding Indians. Indian certainly can’t be blamed for their domination of the series. They have done their homework and the majority of the time it seems like their competitors have brought a knife to a gunfight. AFT is constantly tweaking the rules to try to close the gap between brands but so far the other machines are still losing ground to the FTR. The rulebook has been changed so the Indians have to run smaller throttle bodies and mid-season AFT announced that the Indians would have to add twenty pounds to their minimum bike weight as well as lower the maximum weight for their rear wheel (rear wheel weight equals traction). Try as they might, they have yet to find the magical solution to make the other brands more competitive on the track.

Where I really struggle with the series is when they fail to follow their own rulebook. Unfortunately the rulebook transgressions seem to be directly related to what team you are on or how big of a profile you happen to have in the series. In the AFT rulebook there is a rule that riders must qualify within 107 percent of the of the quickest qualifiers time in order to make the semi-final races. It even says that it doesn’t matter if there are enough riders to fill the field, this rule still applies. In the rulebook this rule is even printed in bold red so it stands out like a sore thumb. At the Atlanta TT this season there were two very high profile riders who did not meet that criteria but somehow managed to make the semi-final races in their respective classes. In the Singles class, series sweetheart Shayna Texter-Bauman had a qualifying time of 37.914 while the quickest rider had a time of 34.801. Doing the math this put Texter-Bauman at 109 percent of the leader’s time, almost three quarters of a second slower than what the rule allows but somehow come semi-final time, there she was on the starting line. At least she was somewhat close I guess because in the “Supertwins” class Jared Mees wasn’t. Mees was almost six seconds off the pace of the leader’s time which put him in the 116 percent range yet Mees was permitted to race and gain points towards his national championship. What is perhaps most frustrating is that just a couple of races later AFT only took 28 riders to the semis in the Singles class despite the rulebook allowing up to 32. Canadian Trent Pickle was among the riders not making the field because on this day the AFT decided to enforce the 107 percent rule despite not doing so at Atlanta. Pickle would have been safely inside the top 32 that the AFT allows in the semis and ironically at the Atlanta race when Texter-Bauman was outside the 107 percent window she was the 32nd fastest qualifier. In talking to Pickle he has no problems with the 107 percent rule, he just struggles with the fact that it only seems to apply to some riders and not others. I agree with Pickle wholeheartedly and can’t even fathom how AFT can justify when this rule is applied or who it is applied to. 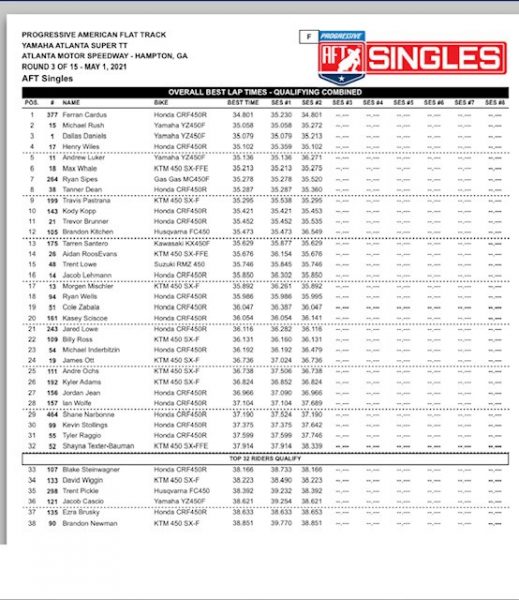 I struggle with other decisions AFT makes as well, such as awarding a race win to a rider who never crossed the finish line as well as changing other rules on the fly when it involves one of the top riders or top teams in the series. Obviously any series would want their top teams and top stars at the forefront because that is just good for business. Sometimes things don’t want to work out that way and as a fan I think you need to let the cards fall as they may. We all know money talks but I think it is time for AFT to be held accountable for the rulebook that they only sometimes want to enforce. Their current system certainly doesn’t make the average privateer want to jump into the mix.