With the CSBK series recently visiting Atlantic Motorsport Park for the first time in a few years, it got me thinking about that time a few decades ago when I made a trip there myself. After hearing about the famous “Roller Coaster”, in my second year of road racing the decision was made to head out east to see what all the fuss was about.

Of course this was 1991 so things were a bit different back then kids. No text messages, no internet, no cell phones and no GPS. Somehow I was able to contact my buddy Gary via rotary phone and we quickly put a plan together. I broke open my piggy bank, grabbed a map, and got my dad to help me load my old RZ into the back of his Mazda pickup which had about as much storage space as my wallet.

Meeting up with Gary after a four hour drive, we pointed the Mazda due east and headed off for Nova Scotia full of anticipation. Somehow when you are in your early twenties and heading down the highway with a racing bike in the back of the truck, in your mind your cool factor seems to multiply by ten. This is the feeling we had as barrelled down the road, mullets flying in the breeze and a Billy Squier cassette cranked so loud that no doubt the people at the track three provinces away could probably hear us coming.

After an overnight stay in New Brunswick at what looked like the Newhart Inn (see TV shows from the ‘80s), and a quick unexpected detour into Maine, we arrived at the track. Now remember up until this point, everywhere I had raced had been completely flat, so seeing the track with all the elevation changes was both exciting and daunting at the same time. I attended the riders meeting and then started strapping on my pink racing boots (remember it was the ‘90s), as Gary fuelled up my bike for the first practice session.

Although we probably had about five tools in total in the toolbox we brought with us, for some reason we thought a stopwatch was a pretty important piece of equipment to bring as well. As I was spending my day trying to sort out a bunch of new turns and tackling hills on a track for the first time, Gary was doing his best imitation of a team owner and keeping a keen eye on the stopwatch. At one point as I was passing Gary he gave me not one but two (I repeat TWO) thumbs up after checking my progress on the stopwatch. Figuring that since I got two thumbs up I must I have been close to shattering a lap record or something, the only logical thing to do at this point was to throw Gary the coolest, most nonchalant two fingered salute as I made my way past him towards the downhill into turn one. Apparently at this point my reflexes also became nonchalant and before I could say “What the Hell?” I was off the track and tumbling not so happily through some Nova Scotia greenery.

After the bouncing stopped it was time for a quick inventory. My RZ, maybe because it had become accustomed at this point to bouncing off the track, came out of it pretty well with just a few more scratches and some slight bends in some parts that should have been straight. As for how I felt that was a different story and the pain started to kick in as the adrenaline started to diminish. I felt a little banged up everywhere but the real pain was in my left knee. After hobbling back to the pits and pulling off my well used leathers, I could literally watch my knee swelling and after consulting with my team owner (Gary), the decision was made to relegate myself to spectator for the rest of the weekend.

Although bummed that apparently my race weekend was over, we still had plans to enjoy the rest of the weekend in Nova Scotia. We were staying in Truro and the bar in our hotel and a bar called Scotland Yard were in the midst of a price war. As alcohol seemed to be the best medicine both emotionally and physically at this point, a few of us spent the night making our way back and forth between the two bars as it seemed that every time we got to one place, we would get word that the other bar had once again slashed their prices to try and draw a crowd. Not sure how many drinks I had that night but I do remember at some point the pain in my knee was gone despite all the walking so I guess the medicine was working.

Saturday morning arrived and the pain in my knee was back and only seemed slightly less aggravating than the pain in my head. We made our way to the track and settled in as spectators for the day and as much as I was enjoying the show, there was a definite sting in not being out there. After the races on Saturday everybody at the track was treated to a king can of Moosehead and a lobster. I can still remember the look on Mark Kowalski’s face as he held his lobster and just stared at it. Apparently he had never eaten anything with eyes before, and the look on his face had me convinced the dead lobster was staring right into his soul. After some more socializing at the track, we headed back to the hotel and jumped into the hot tub. At this point I started talking about the long drive from Ontario and how it sucked that I wasn’t even racing now. While there were no doctors present in the hot tub, Gary, Al McMartin, and Mike Hammond all gave their best medical advice that I most likely couldn’t do much more damage to my knee so I might as well race. That was all the convincing I needed and the decision was made then and there that I would be racing the next day. 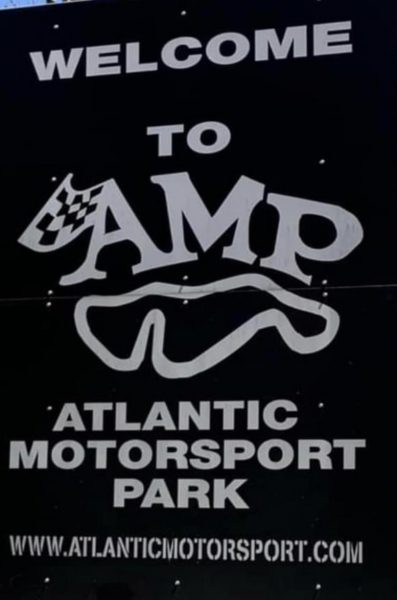 Sunday morning I limped into the pits and signed up once again. Since my class didn’t have a full grid I would be allowed to race but I would have to start at the back. When it came time to race I tentatively headed out on the warm up lap where I discovered excruciating pain every time I tried to upshift. About halfway through the warm up lap the decision was made to upshift with my left hand while still being able to downshift with my foot. The race started and while Hammond and the gang battled for the win, I battled trying to stay on the bike and on the track every time I reached down with my hand to change gears. When the race was over I had passed some riders and finished sixth, and if I must be honest, that is most likely where I would have finished under the best conditions.

All in all the trip was a great time and it really didn’t matter whether the plaque said sixth or first. I don’t remember much about the ride home other than at some point we decided to duck into the golden arches so we could try out a McLobster. If I can give you any advice, please don’t ever do that.