by Patrick Lambie
in The Vallee Report
0

With one round remaining in the 2022 Flat Track Canada season, this year has been one of the most tightly contested in the Open Expert ranks. While the battle at the top of the points standings has turned into a tight two-way battle between Dave Pouliot and Tyler Seguin, the fight for third has been equally impressive as Brandon Seguin and rookie Expert Boyd Deadman have battled for their spot on the championship ladder.

With three-time champion Dustin Brown being sidelined for the majority of the season by a leg injury, the championship was blown wide open and has resulted in race wins being spread out a little more throughout the field. Through five Open Expert main events this year, the series has seen four different riders grab the checkered flag. Only Pouliot has been able to grab more than one victory while other race winners have included Hunter Bauer, Tyler Seguin and most recently Brandon Seguin.

While there is no doubt that had Brown not been injured, he would have been in the mix for the championship, the way the other contenders have been riding I don’t think Brown would have had an easy path to the top. Perhaps the saving grace for the title hopefuls is the fact that Bauer has missed most of the rounds due to his commitment with the NKR Canada team in the AFT series. Bauer has only been able to attend two Flat Track Canada races this season and will also miss the final round at Humberstone Speedway. With first and second place finishes in the two races he has appeared in, there is a good chance it would be Bauer’s name at the top of the standings had he been able to compete at every round.

With the series spread fairly evenly between clay and cushion tracks, the schedule certainly hasn’t catered to one particular rider over another. This past weekend in Wheatley was kind of the wildcard race in the series as both Pouliot and Tyler Seguin have taken victories there in the past. Imagine their surprise as Brandon Seguin proved to be the fastest rider of the day and put in a flawless ride on the way to his first ever national victory in the Open Expert class.

With the recent three-peat of championships by Brown, one thing we know for sure is that we will see a new champion in the series for 2022. Although both Tyler Seguin and Pouliot have been frontrunners for years, for whichever rider manages to grab the title it will be their first ever Open Expert championship in the Flat Track Canada series. Seguin is a former Open Expert champion from more than a few years ago (in fact the youngest ever in Canada), but that was in the old CMA series. Whoever grabs the title this Saturday will join an impressive list of Flat Track Canada Champions that include Don Taylor, Doug Lawrence, Steve Beattie, Brodie Buchan and of course Brown.

Over the past couple of races, I have had fans making their predictions as to how things are going to turn out. Some people have told me that Pouliot is going to take the championship while others have assured me the title is going to belong to Seguin. Some people are Pouliot fans and some people are Seguin fans. I am in kind of a unique situation as I am a fan of both and totally impartial when it comes to who I want to win. From up in the booth, I have watched both riders hone their skills for many years, and in my mind, it is almost unfortunate that they can’t both be declared champion when the final checkered flag is waved. All I really hope for on Saturday is a good, safe race with the outcome being decided by whichever rider is the best on this night and hopefully there are no mishaps or mechanical issues that enter the equation.

As we head into the final race Pouliot has a five point lead over Seguin. That is great news for Pouliot but we certainly can’t count Seguin out. Humberstone Speedway is a clay track which would seem to favour Seguin slightly, but to grab the championship he is going to need some help. If Seguin could manage to win the race, he needs at least one rider between him and Pouliot which would leave them tied in points and then tie breakers would come into effect. If somebody else happens to win (Brandon Seguin perhaps), then Tyler would need at least a couple of riders between him and Pouliot to grab the title due to the Flat Track Canada points system.

I have no idea how things are going to shake out on Saturday at Humberstone Speedway in Port Colborne. I am however pretty excited to interview a brand new Flat Track Canada champion once the racing is over. 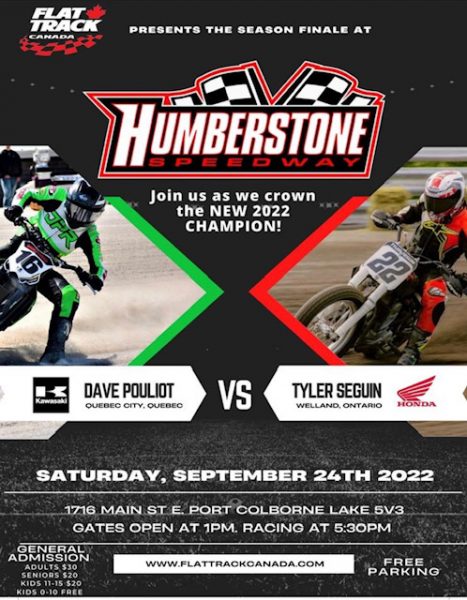