Years ago, motorcycle gatherings were a little less informal. A few friends would meet in a parking lot and shoot the breeze as well as take some time to admire each other’s bikes. They would then set up another meeting and perhaps at the next one they may see a few newcomers join the group. Often times, Tim Hortons parking lots became a popular choice for these little get togethers but really any old parking lot would do. Another popular destination for an informal gathering seemed to be anywhere that served good fish and chips. I’m not sure what it is, but people on two wheels generally seem to have a thing for fish and chips and it isn’t unusual to see at least a few bikes parked out front when you ride past a shop that has a reputation for serving some decent fish and some crispy fries.

With the explosion of social media over the past fifteen years or so, these events have become a little more organized. Now there are all kinds of social media sites advertising the next two wheeled gathering that you may want to attend. They may be called bike nights, moto socials, or even cruise nights, but they all have the same common goal, to get a bunch of bikers together to share a few laughs, trade some stories, and ultimately try to attract new riders to the joy of two wheels.

Last week I got a text from my buddy Ron Hammond (Father Ron), asking if I would like to join him on a ride to Stratford to check out the bike night being put on by Perth County Moto. After giving the Suzuki a quick wipe, I said good-bye to the wife and made my way over to Ron’s as he would be leading the way from his place on his Yamaha R6. Although the skies were a bit threatening, we seemed to luck out as the ride there was dry and uneventful other than me trying my best to keep up every time Ron decided to twist the throttle a little more on his Yamaha. Kind of brought back memories of me trying to keep up with his brother Mike on the track, but we’ll save that story for another day.

Arriving in Stratford, we turned onto Market Place and I was amazed at the amount of bikes already lining both sides of the street. Given all the bikes that were already there and the fact that there were a couple of cars parked there as well (silly drivers), we ended up leaving the road and parking in an area that would normally be reserved for pedestrians. After hopping off the bike I very quickly came to the conclusion that my bar end mirrors didn’t exactly work great for holding my helmet, so hanging my lid off my bars like most of the other cool guys seemed out of the question. Feeling a bit nervous about leaving my $800 helmet on the ground as we walked around, I looked very much like a bike night rookie as I spent the next hour and a half clutching my helmet like a newborn as we wandered amongst the bikes. 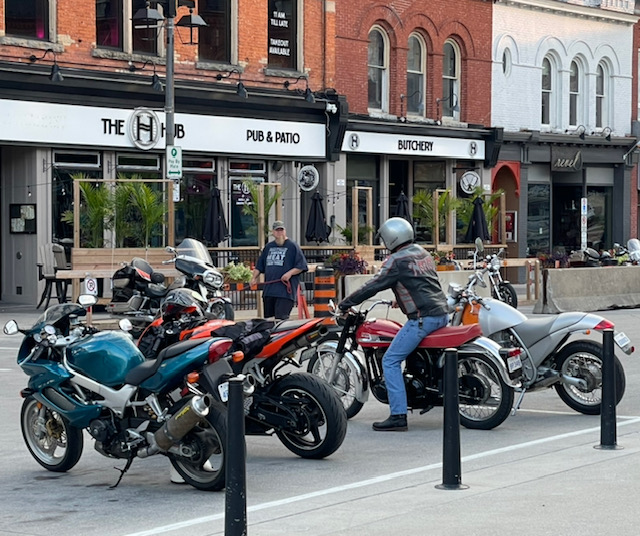 Although I ran into a few people I know including Guy Morden, James Jantzi, and Brandy, Boyd and Leanne Deadman, it became very obvious that I was in Ron’s playground as almost everyone there seemed to know him and not only the bike that he had rode to the event, but the one he had back at home in his garage as well. Ron introduced me to many of the attendees but unfortunately given that they weren’t wearing nametags, the odds seemed slim that I would remember any of them. Ron’s boss Dave was also there on his badass Honda and watching the two of them laugh and giggle together was downright adorable.
The variety of bikes at the event was amazing and no matter your taste there was something there for every bike fan to drool over. Sport bikes, custom choppers, sidecars, cruisers, and even an old Aprilia that didn’t want to start at the end of the night were all in attendance. Sometimes at bike shows you will see groups of the same kind of bikes parked together however this wasn’t the case here as there was no rhyme or reason to the parking arrangements, just a gathering of two wheeled enthusiasts eager to share stories and make new acquaintances. Every time two or three bikes would leave, almost like clockwork another two or three would pull in so there were constantly new machines to check out and new people to talk to.

Along with me looking very much like a newbie as I carried my helmet around, I think I made another booboo during the night which pointed the rookie radar right at me. I’m not sure if it is actually in the bike night rulebook (we all remember fight club), but I’m guessing that my transgression was at the very least an unwritten rule. Every time I happened to notice somebody admiring my bike, I would make my way over and start a conversation about my sparkling Suzuki. After about the third time doing this, I looked around and noticed that nobody else was really doing this, just me. Feeling like a fool I backed away from my back and I swear I didn’t even look in that direction for the next 45 minutes.

Although the unofficial gatherings still take place in parking lots, I urge everybody to attend one of those events you hear about on social media. I promise you the bikes and people will make it worth the ride. Perth County Moto bike nights are on Mondays, and I was hoping we would be going again tonight but mother nature has decided otherwise. Hopefully Ron and I can get to another one before the season is over. I promise I won’t act like a total rookie next time. 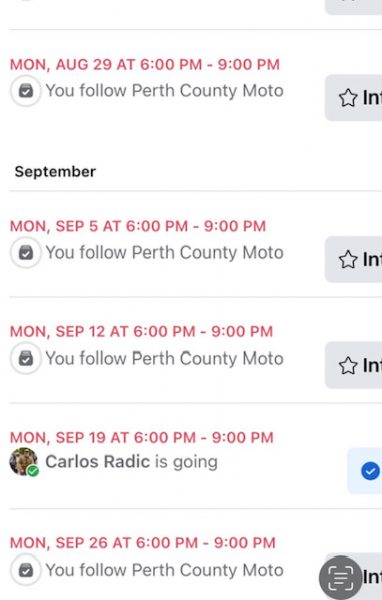 Lalande adds another victory in Canadian MiniSBK action at Lombardy