The 23-year-old from Sioux City Iowa who rides for the Monster Energy/Pro Circuit Kawasaki team had a week to remember/forget as the speedway played host to rounds 13, 14 and 15 in the AMA Supercross series over a span of eight days.

Round 13 saw McAdoo take a decent tumble in practice but saw him rebound nicely later in the day as he grabbed the holeshot in the main and held on for a third-place finish keeping him solidly in the points chase for the title. It was round 14 however where McAdoo put in a performance worthy of legend status.

On the opening lap McAdoo was trying to make up some time after a not so great start. McAdoo then bobbled in the woops on the way to the tunnel jump and what happened next was for lack of a better term horrifying. McAdoo went front wheel first into the face of the jump which in turn slammed him as hard as I have ever seen anybody get slammed into the dirt.

Sadly, McAdoo’s horrible ride was not over yet as the bike did a complete flip with him still tangled in it and once again he was slammed into the ground. The crash looked bad. Very bad. McAdoo hit so hard that 12 soccer players on another continent fell to the ground holding their knees.

The race was red flagged and fans waited to hear the news that McAdoo was being transported to a nearby hospital. After the commercial break fans were stunned when the camera focused on a battered McAdoo as he pleaded with the series doctor to be allowed to join the restart.

Remarkably after a once over by the doctor McAdoo was cleared to race and took his place on the line minus his front number plate. Riding a rush of adrenaline, the gritty McAdoo soldiered on to another third-place finish which was amazing damage control for the points chase given what had happened just 20 minutes earlier.

When interviewed on the podium it was obvious the adrenaline had worn off as McAdoo did his best but the noticeable limp and the grimace on his face left little doubt as to how he was feeling. 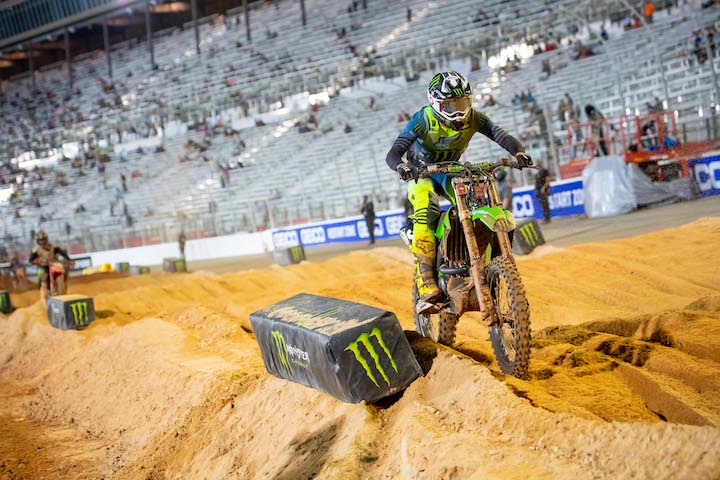 Despite his horrific crash, McAdoo returned to action.

When I first planned this piece, I thought it would strictly be about the drama of round 14. How McAdoo had shown an abundance of heart, determination and bravery on the way to acquiring thousands of new fans.

Then round 15 came along as Saturday afternoon saw McAdoo once again being the centerpiece of one of the most spectacular crashes I have ever witnessed. Getting it all wrong through a jump section, McAdoo was launched off the bike at the top of a jump and did a complete rotation in the air before slamming into the track about 50 feet from where things had gone wrong.

Despite I’m sure being in agony from his insane tumbles just four days apart, McAdoo made it to the starting line for his heat race. In his heat it was obvious that the previous week was taking a toll as McAdoo struggled to a seventh place finish. Not where he would like to finish but at least he was in the main. Just when you thought things couldn’t get worse for McAdoo they did.

In the main event McAdoo was involved in not just one but three separate crashes including one in which a rider clipped McAdoo while jumping over him resulting in McAdoo’s jersey being shredded. Refusing to give up, McAdoo scraped himself off after each incident and struggled to the finish line despite now being essentially out of the points chase.

From being just a few points out of first, to a week in Atlanta where he crashed six times in eight days, McAdoo must be wishing the past week was just a bad dream.

It isn’t even the fact that he crashed six times, it is that two of the crashes looked like they could possibly be career ending or maybe worse. I will never question the warrior instinct that brews inside McAdoo.

His bravery and grit can’t be measured and no doubt even the most casual race fan has told a buddy at work about him after this week. I do however wonder if at some point this week, somebody in the McAdoo pit should have thrown in the white towel. While two of the incidents weren’t his fault, in the others it was his mistake that caused the crash. Supercross is probably the most demanding motorsport out there and most of us can’t even fathom what it takes to tame a track on any given night.

I certainly don’t question McAdoo’s talent but I do wonder if the chase for a title caused him to ride over his head at times leading to a few of these incidents. Regardless I am happy that McAdoo survived to race another day and I guess you can count me as one among the legion of new fans he has gained. I can’t imagine how sore McAdoo is today but the saving grace is that he is young and has two weeks before the next event.

Rest up Mr. McAdoo. I will be cheering for you when you hit the track in Salt Lake. 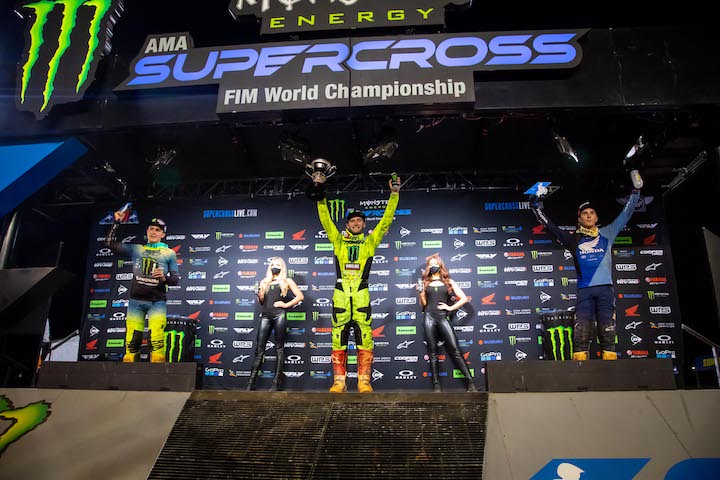 Cameron McAdoo (left) overcame all odds to reach the podium in Atlanta.

May is Motorcycle Safety Awareness Month

May is Motorcycle Safety Awareness Month