Some people know him as “The Mississauga Missile”. His friends just call him “Douggie Fresh”. The one thing everybody can call him is fast.

Doug Lawrence is one of the top expert flat trackers in Canada, and if he could ever attend all of the races here there’s a good chance the Number One plate would be his. Lawrence tends to miss a few of the Canadian rounds every year due to U.S. commitments, but when he does show up at a race on Canadian soil, you can expect to see the Number 73 fighting for the lead.

The September race in Leamington on the half-mile cushion certain

ly didn’t diminish his reputation as a potential heir to the Canadian flat track throne. In the Open Expert final, Lawrence chose to ride a 450 despite many of his competitors hopping aboard 600’s and even a couple of 750’s. In the first couple of laps it looked like it could be a two-rider race between Lawrence and multi-time Canadian champ Don Taylor. By mid-race however, Lawrence had opened up a commanding lead and when the checkered flag flew he had decimated the field with his closest competitor Taylor more than a straightaway behind. The victory was the second for Lawrence this year at the famed Leamington half-mile; back in July he crossed the finish line on one wheel, standing on the pegs, after once again dominating the pack. 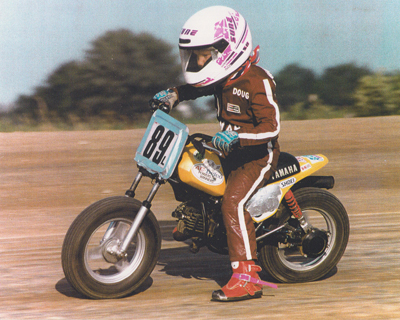 At the ripe old age of 26, Lawrence has an astounding 21 years of experience under his belt. “I started riding when I was four on an old yellow (Yamaha) PW50,” the Mississauga-based racer states. “When I turned five, I started going to Michigan to watch my Dad race. I ended up doing a few races that year, but my first race bike wasn’t yellow. It was actually pink.”

Lawrence counts his Dad among his early racing influences as well as some of the big names back then. “I remember watching Scott Parker a lot, he was from Michigan and he was just The Man. Kevin Atherton was always cool to watch because he always looked so relaxed on a bike. On this side of the border I always paid attention to Steve Beattie, Chris Evans and Scott Buchan.” It seems kind of ironic that, decades later, racing fans can often see Lawrence battling with Evans for the win on many nights.

Lawrence is no stranger to championships; he won a couple of novice titles way back in 1998. His impressive resume also includes an Intermediate Championship to go along with countless feature race wins. Although he has won too many races to remember, he does have a few favourites.

“The first time I won Leamington in ’08, that was pretty cool. Winning the Norm Carr Classic in Belleville in ’09 was also pretty special. So many big name Americans have won that race so it was cool to put my name on that list. Probably my most memorable race was in Arizona in ’08. It was the first time I qualified for an AMA main event and I ended up finishing eleventh.”

Qualifying for an AMA Main Event is no easy task. At any given race there could be as many as 60 riders trying to make it into the final race where they only take 18. Lawrence has had his share of ups and downs in this respect but he seems to take it in stride.

“Sometimes you are pretty bummed after driving a thousand miles to attend a race and then you don’t make the main,” he confesses. “Then you stop and think about the fact that all of the fastest riders in North America are here trying to get into the show. It’s still not fun packing up before the final, but it’s part of the business.” 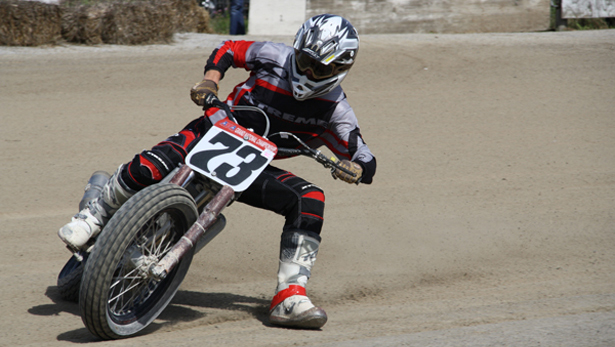 2011 has been a banner year for Lawrence on the AMA circuit. At the time of this writing he had put together a string of four consecutive races where he has made the main. Riding for R&J Racing aboard a Harley-Davidson XR-750, Lawrence has looked very comfortable this year. “It’s been good this year with my Dad as head mechanic as well as having Randy Miller and Jon Castin helping out,” Lawrence says. “We formed this team with the strict goal of doing some damage in the States. I think we’re getting there.”

In Canada, Lawrence has a long standing racing relationship with Kurt Biegger from Kurt Biegger Racing. “Riding for Kurt is great because his bikes are always ready to win at whichever track we happen to be at,” he states. “Doug Beattie is my teammate, and Doug and Kurt both help me a lot.” Lawrence also counts Beattie as his favourite rider to race against. “Doug and I have ridden together for so long, whether it’s on the track, the ice or wherever. I know that when the action gets tight I can trust him and I know he feels the same about me. I was pretty happy for him when he won the Number One plate last year.”

Lawrence seems to be a pretty busy guy even when he’s not at the track. He works in the parts department of a car dealership and also delivers beer on the side. Keeping in shape during the off season also isn’t a problem for someone as active as he is. “I play hockey in the winter and do a lot of snowboarding when I can,” he says. “I actually lived in Whistler for a couple of winters. Those were some good times! Once the ice on the lakes is hard enough, we get out there on the bikes. It’s good practice and a lot of fun. Most of the top guys will be out there.”

For the near future, as far as racing goes, Lawrence has a plan. “Right now my focus is on the States,” he admits. “I am fortunate to have a heck of an opportunity over there so I want to make the best of it. In the next few years I might attend selected AMA races but also try to do all of the Canadian rounds. You never know, I might get that Canadian Number One plate someday.”

Racing fans are advised to keep their eyes on Number 73. It could be at an American track or it could be a track here at home, but one thing is for certain: Wherever Doug Lawrence hops onto a bike, it’s bound to be one heck of a ride!