Under threatening skies but on a rare dry surface at Silverstone, Kawasaki’s top gun Tom Sykes set the best lap time for today’s tenth round of the eni Superbike World Championship Series. After two mostly rainy days, the teams were glad to briefly run in the dry, although this afternoon’s weather predictions are completely negative–- unless you are a Duck, or on a “Duc.”

Sykes turned a best lap of 2:05.605, clearly pushing hard and entertaining the strong crowd of hard core motorcycle road racing fans. Sykes has had a strong run of Tissot SuperPole award success, but yesterday could only earn eighth on the grid, playing it safe during the two treacherous sessions that established today’s 23-rider starting grid.

Missing from the grid was 20-year-old Canadian Superbike Champ Brett McCormick of Saskatoon, SK. Returning to action after suffering serious injures over three months ago, McCormick took part briefly in two Friday sessions, when the surface was not wet. Although McCormick is satisfied with his recovery, he will rest his neck for a few more weeks before rejoining race action aboard the third Effenbert-Liberty Ducati 1098R entry.

“I’m encouraged, I’m not too sore,” explained McCormick from the Silverstone paddock. “I rode about 18 laps on Friday, didn’t ride because of the weather yesterday. My neck was sore yesterday, tight in the back, but not too bad today – I’ll get a little physio and just keep working away.”

Second quickest Sunday morning at Silverstone was Carlos Checa, the reigning World Champ aboard his Althea Ducati 1098R running a tour at 2:05.74. At a track where the Ducati’s top speed hinders progress but the many lengthy turns suit the big twin’s traction, Checa might be looking for a wet race to maximize his chances and move him back up through the points standings with four rounds to go after today’s two races.

Third overall went to the Aprilia RSV4 Factory of Max Biaggi, the former World Champ who currently heads the standings in the fight for the 2012 crown. The “Roman Emperor” showed improved pace, and no doubt would prefer dry running to unpredictable wet conditions. Biaggi heads the standings with 271.5 points, followed by Marco Melandri in second with 250.5 points, Sykes at 212.5 and Checa with a total take of 204.5 points after nine events. Likely one of these four will take this year’s title. 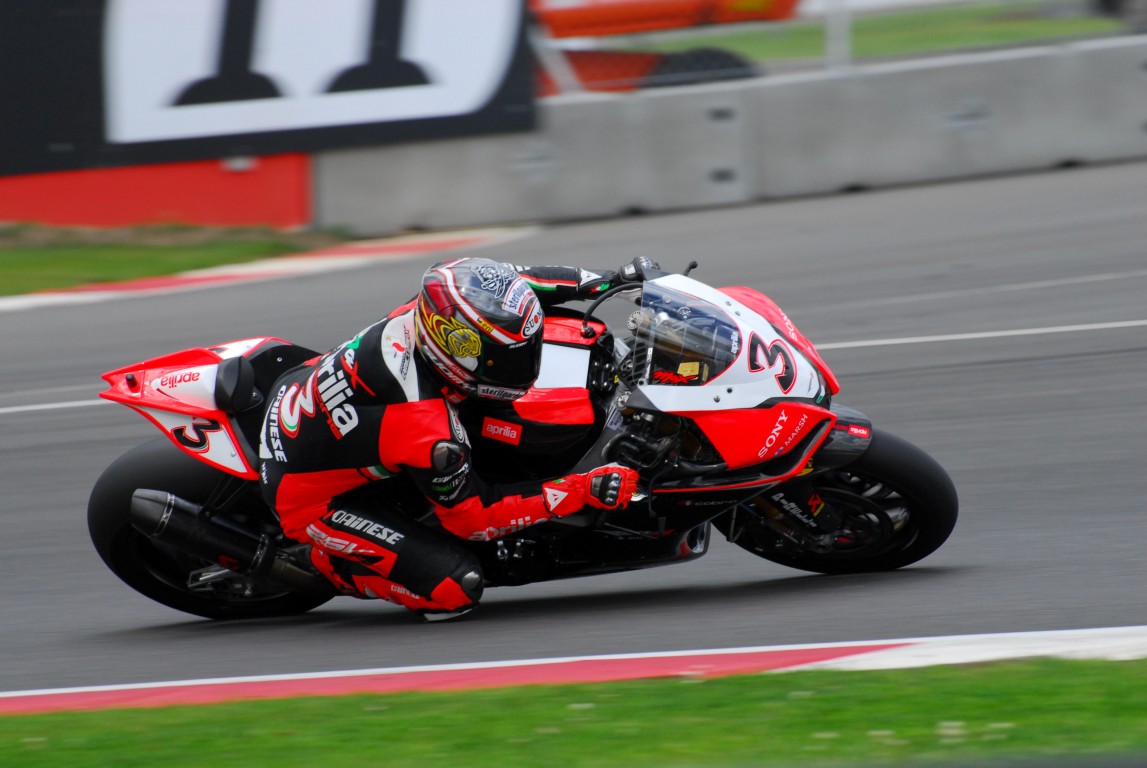 Second place grid started Leon Camier was fourth best in the warm-up aboard the FIXI Suzuki GSX-R1000, indicating that the team’s step up in qualifying was no fluke. Sixth best this morning belonged to Melandri on the lead factory BMW Motorrad entry, the S1000RR rider looking to build on his recent very strong form – he won both races at the most recent Czech round.

Local crowd favorite Jonathan Rea was 14th best aboard the Ten Kate Honda CBR1000RR, a disappointing effort of the rider who sits fifth in the points. Unlike most front runners, Rea may be looking for the ever-changing conditions to provide wet weather for the two 18-lap, 106.2-km long scheduled races this afternoon at Silverstone.