This review was first published in the print edition of Inside Motorcycles, Volume 15, Issue 1 March/ April 2012. Story by Costa Mouzouris/ Photos by Andrea Wilson.

It’s been about two years since I’ve ridden a Suzuki GSX-R1000. I have had the good fortune of riding every version of Suzuki’s open class Gixxer since 2003, and I can now add the revised 2012 model to that list.

We got the opportunity to sample the latest GSX-R1000 at the Homestead-Miami Speedway in Florida and even after two years, hopping aboard the bike immediately rekindled a familiarity with the machine that has transcended its generations. The GSX-R has been around since 1985 and it is truly the grand daddy of supersports. 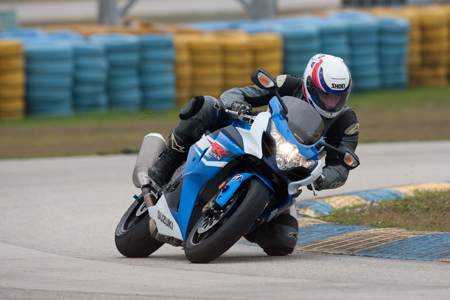 The bike is not all new, Suzuki calling it a “refined version of the 5th generation” (or version 5.1 if you will), which first saw light in 2009. There have, however, been several slight revisions that combine to sharpen handling and improve low to midrange power.

The most noticeable change on the new bike is the loss of the extra muffler it gained in ’09. The pre-chamber beneath the bike is also gone, and a smaller catalytic converter now resides in the pipe leading to the exhaust canister. 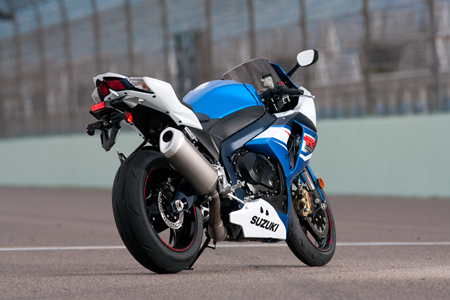 Like synchronicity, this subtracted muffler caused a slew of other changes elsewhere on the machine. Because weight was removed at the rear and far from the centre of gravity, weight bias shifted forward and had to be redistributed. Items like front brake discs (now 5 mm thick, 0.5 mm thinner than before), front calipers (now monobloc Brembos), and even the front axle (39 grams lighter) were trimmed of weight. In total, the new Gixxer lost 2 kg (4.4 lb), now tipping the scales at 203 kg (448 lb). 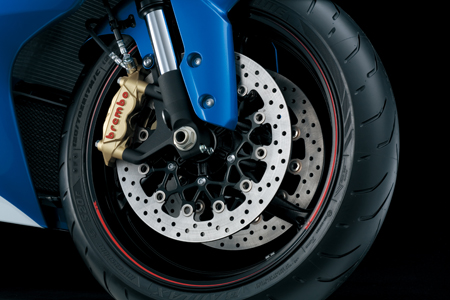 The engine got subtle massaging, including revised exhaust cam timing, lighter pistons and valve tappets, and a slightly higher compression ratio, now at 12.9:1, up from 12.8:1. The changes, especially those to the cams, boost low to midrange power without sacrificing top-end grunt. Suzuki claims to have ironed out a couple of dips in the power curve at lower revs with the changes, while peak claimed horsepower remains at 182 at 11,500 rpm (500 rpm lower than before) and peak torque has not changed at 86.3 lb-ft at 10,000 rpm. A remapped ECU has also smoothed throttle response and reduced fuel consumption by eight percent. 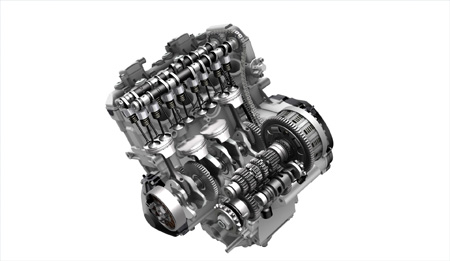 The GSX-R — pretty much throughout its history — has always been known for being a well-balanced and confidence-inspiring machine. It didn’t take but a couple of laps of the infield course at the NASCAR superspeedway to get accustomed to the litre-class Suzuki.

Handling at speed is neutral and assured. Suzuki made minute changes to the big-piston fork (BPF), including reducing overall length by 7mm and reducing travel by 5mm. Internally there have been no changes made, neither to damping nor to spring rates, but factory damping settings are now adjusted softer, and more preload is dialled into the springs, these alterations meant to deal with the lighter weight and shorter fork. This is done strictly using the external adjusters, and the adjustment range is unchanged. No changes were done to the rear shock.

Another change is a move to Bridgestone S20 OEM tires, which are said to be more versatile (read less track oriented), with better grip than the previous ‘stones in wet weather and low temperatures; the front tire is even 200 grams lighter than the previous model in keeping with the weight redistribution.

Our machines were equipped with Bridgestone’s R10 DOT race rubber for the racetrack, with a medium compound up front and a hard in the rear. They provided very good, predictable grip, especially when considering the different adhesion of the track surface caused by the concrete patches that were inconveniently located at several corner apexes (we were told grip was fine over the concrete as long as we didn’t trail brake or accelerate hard on them). Stock suspension settings worked fine, but as speeds rose, rear damping needed to be firmed up a turn on the adjuster to quell rear-end wallowing on corner exit. 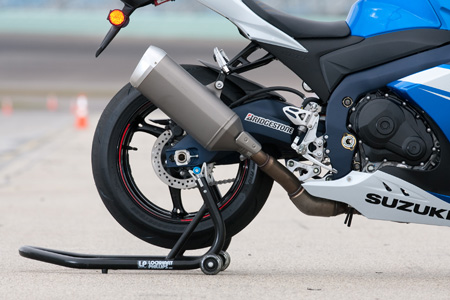 Power delivery was indeed smooth and easy to manage, especially when coming out of some of the slower turns below 6,000 rpm in second gear, where the throttle could be turned to its stop. The engine was, in fact, surprisingly docile below six grand, as revs reluctantly built as if engine mapping was softened in the lower gears.

The big Suzuki has three power modes, and I rode most of the day at the track in the most aggressive A setting (B softens low to midrange power and C reduces output throughout the rev range). This Suzuki’s linear power delivery was deceptive, as you didn’t sense a violent rush of speed in the upper revs that you experience on the same-class BMW S1000RR, though the speedometer indicated otherwise at the end of the front straight.

The slipper clutch worked flawlessly, and even saved my ass after I made an unintentional downshift coming off the front straight and into the very high-speed Turn 1, where rear-wheel chatter or lockup could have pitched me onto the pavement. Instead, the Suzuki just railed through the sweeping left-hander, with only a few extra revs on the tachometer to show for my rookie-like mistake. The only noticeable inconsistency with the bike was that the transmission shifted with some firmness, which is uncharacteristic of Suzuki motorcycles. 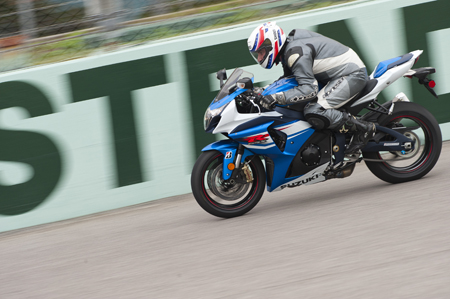 Suzuki has made minor improvements to the new GSX-R1000, though assessing how it compares to the old bike was not possible as we didn’t have one on hand for comparison. My seat-of-the-pants assessment tells me it’s pretty much the same. This is a good thing considering the GSX-R1000 was a great machine to begin with, and it has a string of World Endurance and AMA Superbike championships to vouch for it. BMW even used the 2005 GSX-R1000 as a benchmark when it developed the potent S1000RR.

But this is the 21st Century, and every one of the Gixxer’s main competitors has adopted advanced electronics to help manage either high output or the high speeds that output is capable of attaining. 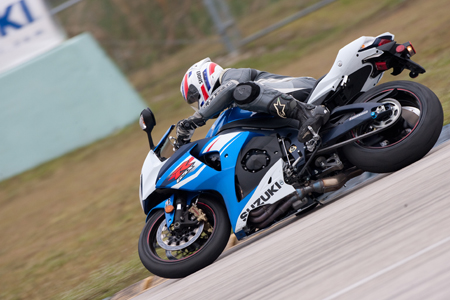 Aside from the three power modes, the GSX-R1000 doesn’t rely on electronic intervention to manage power output or to control braking.

ABS is less of an issue, especially since only highly skilled riders should even consider buying an open-classer (yes, we all know that’s not always the case). But traction control is a useful tool, both for the street rider and track day enthusiast. The GSX-R 1000’s saving grace is its easily manageable powerband — it does quite well without an electronic nanny — but it’s probably one of the few items this bike could gain that would be an improvement. 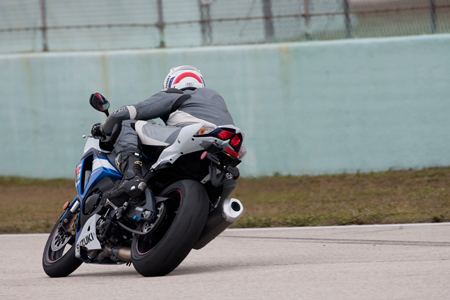 It’s still an excellent performer, and years of development have produced a well-rounded, well-balanced bike. It’s also at the lower end of the price range at $14,999, which is a welcoming $1,600 reduction from last year’s model (on par with the R1 and hundreds to a couple of grand less than the rest). Lack of advanced electronics aside, Suzuki’s open class flagship is still a great bang for your buck. 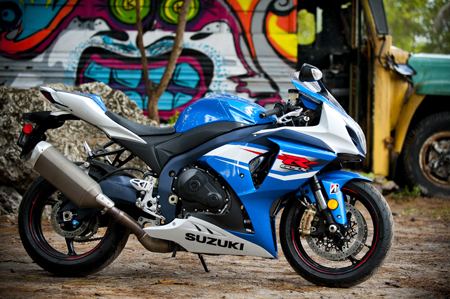