Following the final Superbike World Championship round of 2011 in Portimao, Portugal, newly crowned Canadian Superbike Champion Brett McCormick represented Inside Motorcycles at the official end-of-term test day at the Portimao Circuit.  Fresh from racing a BMW in the SuperStock 1000 Cup the previous weekend, McCormick knew the track and, and in his third year test riding for IM, was comfortable pushing hard on some of the world’s best works racers. 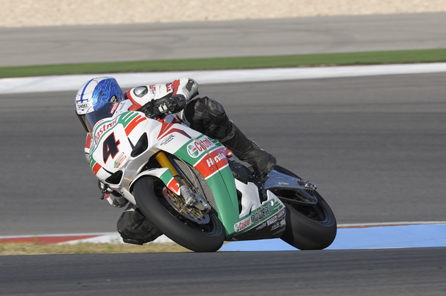 I was initially impressed with the Honda, even though it was first thing in the morning and the first run of the day.  The ergonomics were good, and that was a surprise since Jon is so small!

The Honda had a throttle blipper for downshifts, and that was really mind blowing.  It’s so bizarre; your mind knows another way, but instead you just drop four gears and head into turn one – you don’t really have to do anything more.  This allows you do be much more consistent with the front brake, since you’re not working the throttle for down shifts.

The bike had a great overall balance, really felt planted; pretty neutral, all things considered.  It’s solid out of the box and the team tells me the geometry and stiffness is close to stock.  It felt tiny, and the power was deceptive since it’s so smooth. It was like a 600 on steroids! 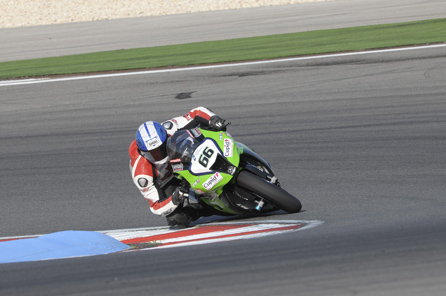 Heading out of the pits, the bike felt big – wide bars, a big tank, the front end felt low – it was really different.  I think it was a little soft for my size and weight, as it would push the front end exiting the corner, and I could only really finish the corner if I spun up the rear tire.

Most of the bikes have tall gearing, but on the Kawasaki you had to drop down to first gear four times a lap.  First was really tall, and then the rest were bang-bang-bang right after that.  The brakes were really good (most of the bikes had great brakes), and after my SuperStock bike, I was braking too early most of the time!

The Kawasaki’s electronics package was really impressive. If the rear spun, the TC wouldn’t kill the drive, and it would keep digging, putting the power down.  It was really planted in the fast stuff, but I would be worried about cooking the rear tire over a race distance. 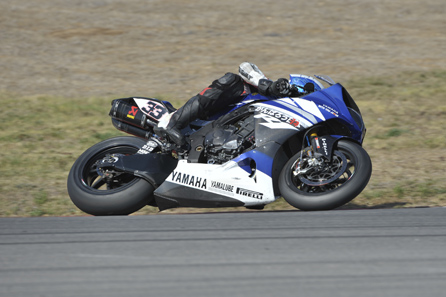 Melandri’s bike felt really tiny, like I was back on a (Yamaha) YSR mini racer, but that’s no shock since Melandri is five foot nothing, at least a foot shorter than me.  The pegs were so close to the seat that my knees wound up on top of the gas tank.  It was a struggle to ride, so cramped it was almost dangerous.

But it was just sick how the Yamaha put the power down. It has great torque and really pulls through each gear – it was deceptively fast in a straight line.  The problem was that it spun the rear tire everywhere, so I had to use the rear brake everywhere.

If I really attacked, hung off the bike a lot, it turned on a dime.  The more I pushed, the better the feel.  The traction control was really good, you could feel what was coming, but overall, this bike was tough for someone my size to ride. 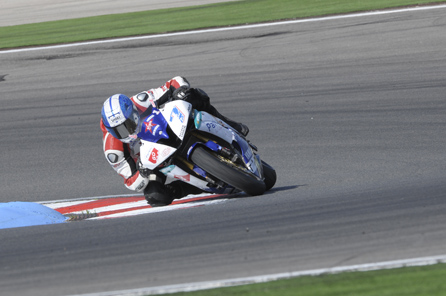 This was the first 600 I had ridden since my Suzuki GSX-R in 2009, and I was looking forward to it – Chaz and I are the same size, so it fit me really well.  The front end seemed really high, the exact opposite of Melandri’s Yamaha R1 Superbike.  The R6 turned in really well and went side-to-side on the dot, the way only a really well set-up 600 can.

There was no spinning, no sliding; the thing felt like it was on rails.  It probably had over 140 horsepower, but after playing with the 200 hp 1000cc bikes, it didn’t seem that fast.  You can go to full throttle right away, everywhere, and it isn’t intimidating.  You can see that this bike is dialled in, and that helped Chaz clinch the SuperSport Championship early. 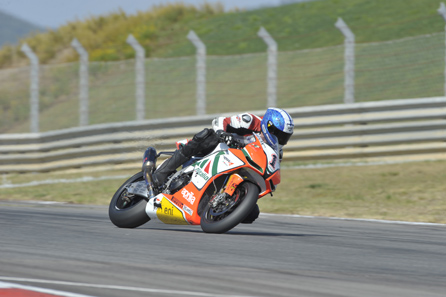 This bike had Biaggi’s bodywork, but I’m sure it was Camier’s, since it fit fine and Max is much smaller than me.  I really love this bike – I got on the gas right away and was railing by the second corner.  I really liked the RSV4 when I first tried it two years ago, and this time, within a couple of laps, I was maybe three seconds off the weekend race pace. Someone, please get me an Aprilia!

The V4 really pulls; it has the bottom end power of a twin but the up-high performance of a four-cylinder.  It was like Rae’s Honda in terms of balance, no dive or squat, and it was the best for holding a line.  You even got good feel from the rear, and that’s hard to get on a Superbike.

Really, I think this bike is like a MotoGP bike. It’s not crazy or anything, it just works so well.  Aprilia has the best electronics, the best wheelie control, and the RSV4 was just so positive in terms of feel. 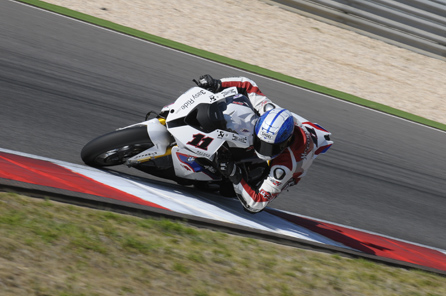 This bike seemed pretty similar to my Canadian Superbike, but with much different electronics than what we use at home – with this bike, the TC was kicking in constantly.  The power curve is way more violent, and I’d like to try this bike with an engine that Patrice (Goyette, Canadian BMW tuner) built!

I couldn’t get on the throttle as hard as with the other Superbikes; there was almost too much power to set a consistent lap time.  This BMW was practically overwhelming!

Corser uses giant 328mm brake rotors, and the brakes were just crazy.  The bike steers into turns really well, good to the apex, but with maybe a bit less ultimate side grip.  In Canada, this is hardly an issue, since most of our corners are point and shoot.

There was no rear brake for my foot, since Troy uses a thumb operated rear.  Overall, there wasn’t much feel from the rear; it was floating around back there.  I needed that rear brake to get it turned, keep it in line – I learned this method in my Motocross days. 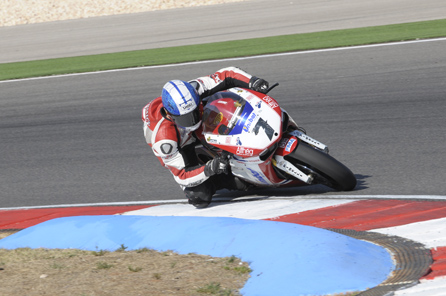 This is totally different from the Lanzi Ducati I tested in France last year – it turns out that Lanzi and Bayliss use one setup, and all the other Ducati riders use another!  This bike was so nice; I couldn’t get over the feel from the front end.  Usually, you have a give and take with setup, but this bike worked well everywhere.

The on/off throttle response was abrupt below 6,000 revs, but since the thing pulls to something like 14,000, I’m guessing most riders never run it so low.  It was very user friendly, and I love how it would slide and then pick up and finish the turn, still holding the line like crazy.

Believe it or not, you could actually turn in too early with the Ducati; the steering was so good, very precise.  I’m not surprised this bike took the title; I really couldn’t give you any complaints about how it works.  It’s much like the Aprilia, but with an even better front end.

(Editor’s Note:  McCormick’s brief outing on Checa’s title-winning Desmo yielded a lap at 1:47 flat, good enough to earn an official test the next day on the Effenbert-Liberty Ducati of series veteran Jakub Smrz. That test went very well – stay tuned to Inside Motorcycles as Brett weighs his options for 2012.)