by Greg MacPherson
in News
0

Canadian Brett McCormick on the grid preparing for his WSBK debut

Brett McCormick made a strong debut in the 2012 Eni Superbike World Championship today at Imola, Italy aboard the Liberty Racing Team Effenbert Ducati 1098R.  The Saskatoon, Saskatchewan based McCormick moved from the rear of the grid to run as high as 11th overall in his first-ever World Championship appearance.

McCormick looked set for an impressive points paying position in his series debut, but his shot at a top 15 finish was spoiled on the last lap when his twin began to run out of fuel.  McCormick faded from 14th to 16th, just out of the points, but was still encourage by his overall strong initial World Championship outing.

“It ran out of fuel at full lean,” explained McCormick post-race.  “That got me, I bobbled and missed my next braking marker, and I got passed within sight of the finish.  Then it ran right out on the cool off lap, and I coasted it in.”

After engaging in several dices throughout the 21 lap race, McCormick was leading Leandro Mercado of Argentina and Ayrton Badovini of Italy when he encountered his fuel issue.  Both riders passed him near the end of the final lap.

In a race that had several major incidents in the early going, McCormick made the best of the suddenly cool and threatening conditions to move up several places on the opening lap.  After starting from row six, McCormick was up to 11th after lap two, and making the most of his opportunities. 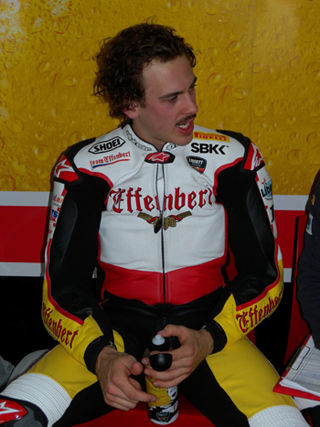 “Everyone got stupid in the first chicane, there was carnage with everyone trying to make a move going in, and that made them all blow their exit,” started McCormick, reflecting on the start.  “I was careful going in and got the drive, and got past maybe five guys.  I waited a bit for everything to settle down, I got shuffled back by a couple of the victims making up for their problems on the first lap.”

“Then I got going with John Hopkins on the Suzuki and I picked up my rhythm.  I wasn’t following him, I was just sorting things out, and we were running the same kind of pace.  Then Hiroshi Aoyama got past on the works Honda, I passed him back but missed a shift, and that let Hopkins get clear.”

Late in the race, McCormick was under pressure from Mercado and Badovini, but “I knew someone was there, I didn’t know who, but this is a competitive series – you should expect someone to be there.  It was better to race that way, I wouldn’t want to be all by myself in 20th or something, all alone.”

“At the end, my tires were cooked but everyone’s were, that how it’s going to be in a long race.  The biggest thing was the sudden change in weather and the tire choice, and I think the team did a great job there – we had no experience with these conditions this weekend, we made good decisions and my lap times were not affected, so I think we did well.”

McCormick’s fastest lap of the race was a 1:50.147, comparing favorably to his qualifying speed.  14th finisher Mercado did not turn a lap that fast.

“I’m really happy right now, I am so please with everyone’s effort,” concluded McCormick.  “I’m in a great situation here with the Effenbert crew, and I think that overall that was a great start – it’s good to have one under our belt, and there is another race in a couple of hours!”

The opening Imola race was won by reigning Champ Carlos Checa aboard the Althea Racing Ducati 1098R.  Checa paced pole winner Tom Sykes’ Kawasaki ZX-10R for the opening portion of the race, then made a decisive pass and pulled clear, setting a new track lap record at 1:47.877, eclipsing his lap record of the previous year at 1:47.934.