MONT-TREMBLANT, Que. – Tributes were paid to a pair of racers on an emotional final day of action for the Mopar Canadian Superbike Championship at Le Circuit Mont-Tremblant on Sunday.

“This is a sad day for us,” said Jordan Szoke after clinching his ninth Canadian Superbike title on Sunday afternoon. “We’ve lost a couple of up and coming racers. But I think they would have been very proud we came out today and happy to see the great racing.”

The 34-year-old Auger had crashed on the opening lap of the fifth round of the Amateur Superbike series at CTMP on Aug. 11. The Champlain, Que. racer was taken to hospital in Toronto with head injuries but passed away six days later. He was fifth in the Amateur Superbike point standings at the time of his accident.

The rescheduled Amateur Superbike race was run on Sunday morning at Le Circuit. All competitors in the class ran with black armbands and following the race all the finishers joined race winner Stephan Houle on a victory lap.

MacRae’s crash came late in the XR1200 Cup qualifying session at Le Circuit. The 24-year-old from Calgary was taken to Sacre-Coeur hospital in Montreal where he died on Sunday morning. 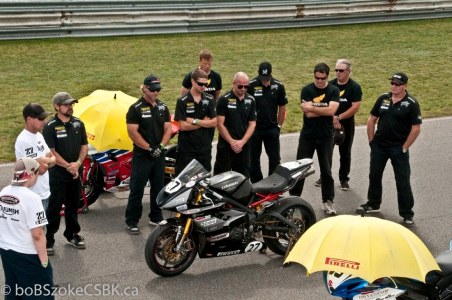 His Triumph 675 Sport Bike was placed at the front of the class grid before the start of Sunday afternoon’s race program (above) while a moment of silence was held for both he and Auger. And in similar fashion to the Amateur Superbike competitors, the entire XR1200 Cup field did a group victory lap in MacRae’s honour after their race.

MacRae had qualified second for the Pro Sport Bike race and finished second in the final point standings to three-time class champion Jodi Christie. He ended up as fastest qualifier in the XR1200 Cup session with a new track record of 1:49.775.

“I really enjoy racing and that’s what got me out here today,” said Michael Taylor after winning Sunday’s XR1200 Cup race. “This is the most important trophy for me but the worst one to win. JR’s motorcycle should be in the middle [first place position] here. He was a great guy and I enjoyed his company immensely.”

MacRae’s Ruthless Racing teammate and team owner in the XR1200 Cup, Darren James elected to ride in Sunday’s race and finished a close second to Taylor.

“It was a last-minute decision for me to come out here,” James said. “JR and I had grown really tight over the last 10 years. We’ve lost a great young man.”

Additionally, all race winners at Le Circuit on the weekend completed their victory laps using checkered flags with Auger’s race number, 13, on them. Tomas Casas is shown below after taking Sunday’s CBR250R win. 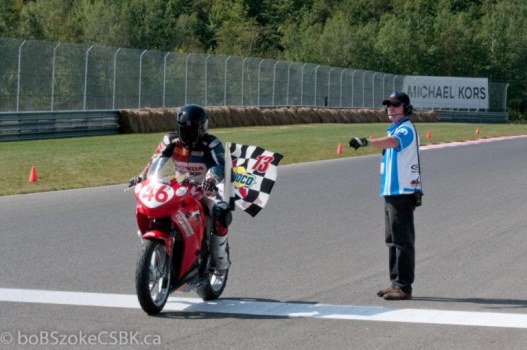 And Trevor Daley, winner of the Sunoco / Brooklin Cycle Racing Rookie of the Race Award in the Pro Superbike class, donated his $500 cheque to the series’ Rider Safety Fund (below). 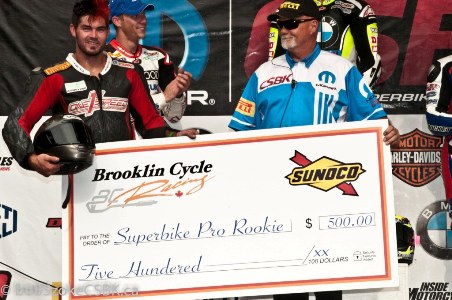 Law enforcement officers to be equipped with Medical Data Carriers

Law enforcement officers to be equipped with Medical Data Carriers