When your entire trip is full of highlights, how do you write a story that fits onto just a few small pages? Jordan Szoke does his best to describe an unforgettable Rocky Mountain adventure — in 2,000 words or less.

Packing up our saddlebags at Blackfoot Motorsports in Calgary, three friends and I jostled around the machinery that would be our steeds for an adventurous Rocky Mountain trip. Lined up were four adventure tourers from three different manufacturers: a BMW F800GS and R1200GS, a KTM 990 Adventure and a Triumph Tiger 800. Pat Chambers, Doug McRae, Jeff Hart and I got to test the limitations of these motorcycles through diverse terrain in the Rocky Mountains of southern BC. The plan was to switch mounts frequently to review the pros and cons of each bike.

We started our trip by taking the popular Bow Valley Parkway from Cochrane to Banff, AB, a much more scenic and exciting way out to the peaks than the traditional Highway 1. We crossed the border into BC via 93 South, a very twisty road with lots of beautiful scenery, particularly when you pop over the hill to catch a stellar view of the Radium Hot Springs. We continued south to Cranbrook, a ride that feels like you are entering a different world as you leave the carved stone of Radium behind to welcome the desert-like, barren terrain surrounding Highway 93/95. 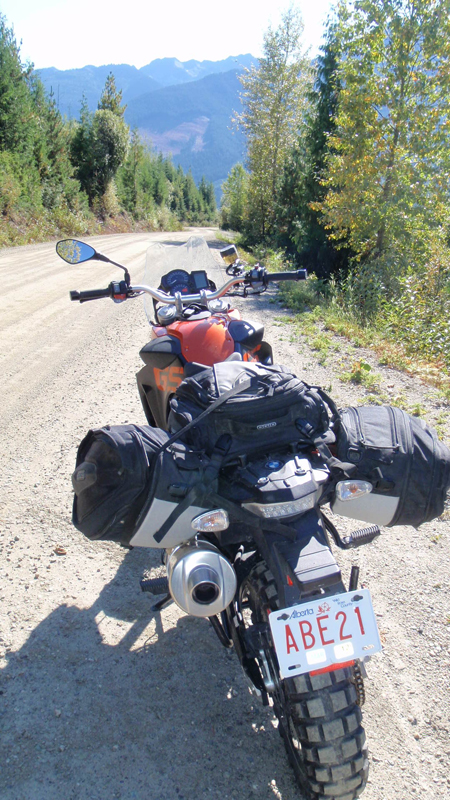 Conventionally, on four wheels you would continue on the highway south to Creston. But seeing as we were mounted on adventure touring motorcycles (and yearning for some dust), we headed west at the Moyie River and took the legendary Grey Creek Pass. An established logging trail, the pass had us navigating through a series of anticipated switchbacks up to the 1,900-metre crest before curving back down again to duck out around Kootenay Bay.

We pulled into the local marina for a beer and a bite to wait for the ferry across the Kootenay Lake to Balfour. While I was enjoying some suds, the door kicked open and a gal stomped in proudly carrying a huge 35 lb. lake trout. I could hardly wait to throw my line in, as we had also planned on enjoying some of the local trout fishing that the Kootenays have to offer. Exiting one ferry, we arrived at another. This one, a smaller cable ferry at the Kootenay River, took us toward our destination for the evening at Doug’s cabin just outside of Nelson. 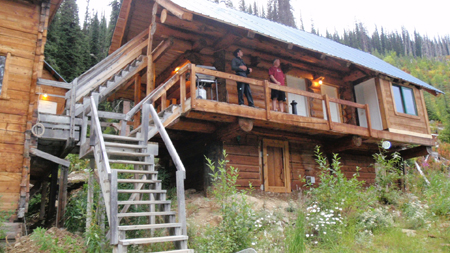 BMW R1200GS: This is the ultimate touring bike. It does everything well. When you ride it, you know you’re going to make it to your destination (and yet, ironically, it was the only bike to get a flat on our trip). This bike is big and heavy, but had the best turning radius. It has lots of power everywhere, and is unquestionably a world traveller. The only real downside is that because it does everything well, it just doesn’t make you feel alive like the other bikes do.

We awoke the next morning to ride a small pavement loop in and around Nelson, as we had planned on doing a little fishing in the late afternoon. That massive trout had us itching to reel one in for ourselves. We headed back over the Kootenay River on the cable ferry — the only way in and out — to Harrop. Headed north, we stopped in Kaslo for lunch and took the 31A west to New Denver.

The roads around Nelson are impeccable, all consisting of new pavement, meandering in and out along the seemingly cliff edges of the many lakes and rivers found in the Kootenays. It almost feels like the cliffs are endless as they drop down into the water until they vanish out of sight. The assortment of twists and turns did have me yearning for something I am a little more used to (my sportbike), though the all-purpose nature of the motorcycles we were on did not leave me disappointed.

Headed south on Highway 6 to Slocan, we found ourselves sandwiched between the Valhalla and Kokanee Glacier Provincial Parks. We enjoyed the 32-degree weather, as did the many road cyclists who were appreciating the same roads. Being an avid “roadie” myself, using pedal power to train for my day job, I too also wanted to get out and push the pedals a bit along this route. That’ll have to wait for the next trip. Headed back on the 3A to Harrop, we arrived back to the cabin just in time to enjoy some mid-afternoon fishing along the Kootenay River. 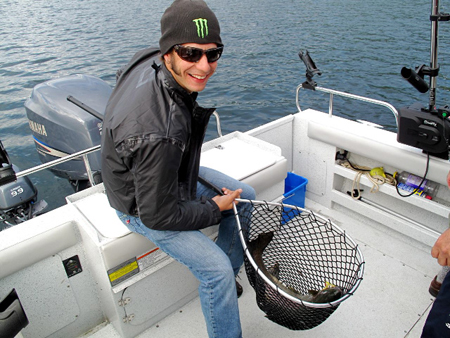 KTM 990 Adventure: I found that when standing on this bike it was really comfortable, although not as comfortable seated during really long trips. It wasn’t the prettiest to look at, but the performance was phenomenal. It definitely had the best motor out of all the bikes we rode. The high revving V-Twin had lots of power, and you found yourself consistently speeding. Thankfully, it also came with the best brakes.

I woke up the next morning irked that I didn’t catch much of anything on the boat (although Jeff caught a nice 30 lb. trout that we enjoyed for dinner). I snuck out of the house early to cast a line or two off the dock before the guys woke up. Well, wouldn’t you know it — I caught something. Not just any something, but a giant, rare kind of something. Up to the surface loomed a panache, one of the rarest finds in the Kootenay River. Reaching behind me to grab the net so I could scoop up my precious find, I suddenly realized there was no net! Yelling frantically for the guys to come help me, my cries for help were drowned out by “Up On Cripple Creek” by The Band, blaring over their morning coffee. I struggled with my fly rod to drag my fish up and over the dock. I got to see her only for a fleeting moment before she dropped off my line and back into the clear waters below. Yes, that was the one that got away. 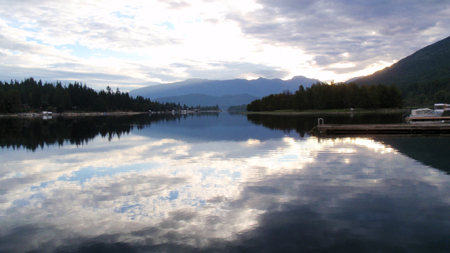 Shaking off the displeasure of losing my panache, I strapped on my helmet as we prepared for one of the longest — and most adventurous — rides of the trip. Leaving Nelson, we decided to take the 31 North, known to most as the Trout Lake Pass. This gravel pass is high, and our motorcycles (and their riders) loved leaving the pavement behind to enjoy the grit. This entire grid follows the steep cliff edges beside Trout Lake, and had us enjoying the scenery and elevation it had to offer. 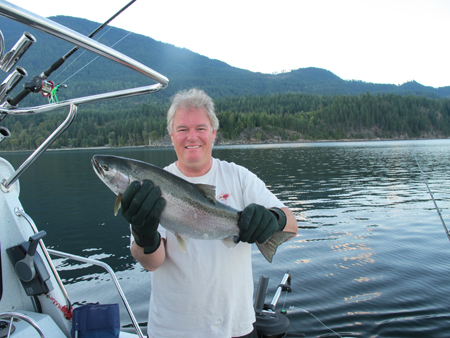 We stumbled upon two grizzly cubs lazily crossing the road, paying no mind to us or our motorcycles. I stopped for a quick photo op and away we went again, not waiting around to see if Mama Bear was behind them. The only other local scenery consisted of a raggedy old man aboard a Gold Wing speeding down the grid, lacking any sort of cranium protection and rocking out to his tunes as high as they would crank. I’m sure he washed the grit out of his teeth with a Budweiser when he and his Wing found their destination. 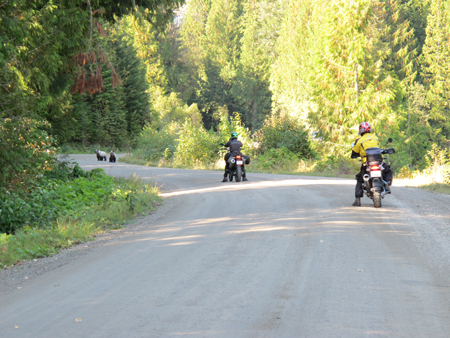 Triumph 800: If this bike was lined up beside the F800, you just might make the mistake of hopping on your buddy’s motorcycle. It looks, feels and is positioned the same as the BMW. It does not have the torque that the F800 has, but makes up for it on the top end. It also sounds really (really) cool, so you are constantly revving it. One downside is that the Triumph’s brakes weren’t as strong as on the rest of the bikes.

We then took the ferry from Galena to Shelter Bay, continued on Highway 23 to Revelstoke and then east to Donald where we met Dale McKnight, one of the founders of Chatter Creek heli/cat skiing lodge. We worked our way north 90 km into the bush to his sanctuary nestled 6,500 feet high in the Columbia Mountains. This area is famous for the Columbia waterways and the massive logging operations that take place here. The logging roads meander in and out, zigzagging through the forest; it would be easy to get disorientated here. Dale, clad in an open face helmet and a pair of goggles, was obviously very familiar with these tight technical roads and aggressively rode them high into the peaks. Not being one to back down, I ponied up to the challenge and followed him vigorously. Peeking down at my speedo, I’m glad that we didn’t run into any RCMP — not like that was likely given our location.

As dark descended upon our party of five, the BMW was struck with a flat. Nothing humbles you more than being located 90km into the bush, daylight fading, and finding yourself with a problem. We “farmer fixed” the flat and limped the big GS to the cabins. 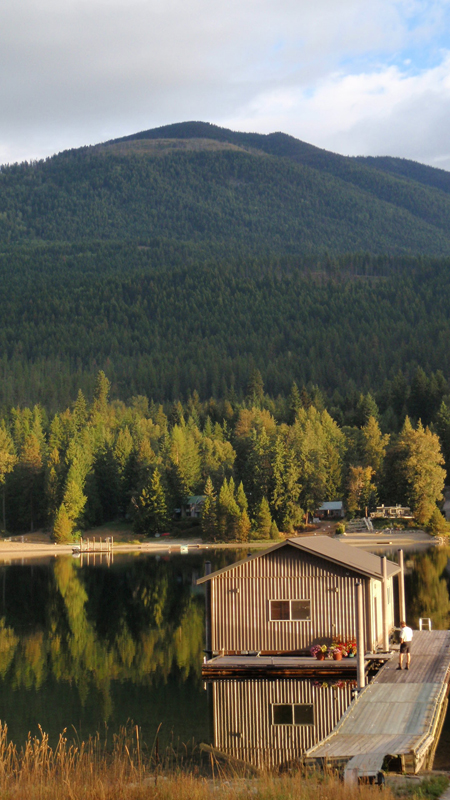 Rounding the final bend, I was awestruck by a massive log chateau, one of four that Chatter Creek calls home base. What a beautiful sanctuary amongst the wilderness. Outfitted with satellite phones and internet, you can enjoy all the luxuries of home while still being secluded in the wilderness. Dale and his partner Dan Josephson had built all four structures out of the magnificent pine trees that can be found there. The largest of the structures measures a whopping 20,000 sq. ft. The lodge offers heli and cat skiing through the winter months at altitudes as high as 10,000 feet, with over 180 km of cat trails. Chatter Creek is an impressive operation and I will definitely return when there is powder.

As we settle in for the night a truck arrives, stocking up the lodge with over 1,300 bottles of wine for the winter. Impressively, the driver negotiated the same road we rode in on! We of course enjoyed a bottle or two over dinner while planning our route for the next and final day. We figured the best way to end it would be to ride up the 10,000 feet the lodge had to offer.

BMW F800GS: This bike felt like a dirtbike. It was nimble and easy to ride, and was the most ergonomically comfortable motorcycle I have ever ridden. It is the only motorcycle I have been able to ride for a very long time comfortably. The motor was awesome, but it just didn’t sound cool. Very torquey off the bottom, but unfortunately lacked a little up top. This bike loved the dirt more than the pavement, but worked well in either condition.

In the morning we awoke to wet, rainy conditions. Navigating the ride up to the peak would be nearly impossible. Disappointed, our foursome said goodbye to Dale and Dan and made the treacherous trek back to the pavement before bee-lining it back to Calgary. 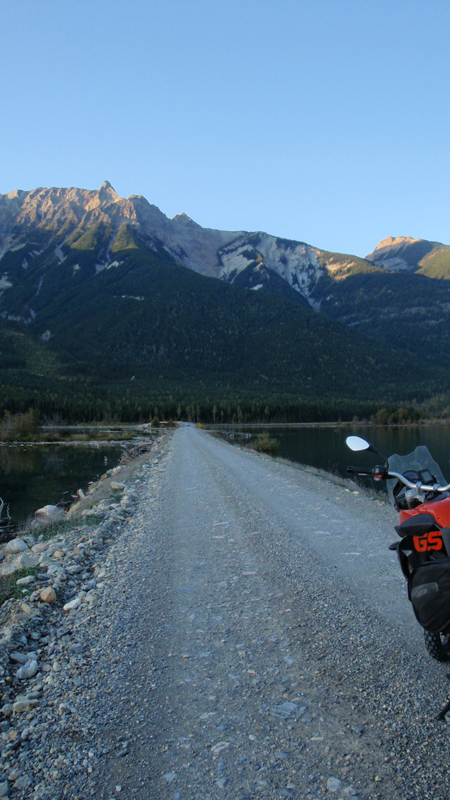 It’s funny, but every time we swapped motorcycles, it seemed like the one we were on became our new favourite. Honestly, how could it not? We had spectacular scenery, we were mounted on some of the best adventurer tourers known to man, and were smack in the middle of the Rocky Mountains — motorcycle heaven.

If you have the opportunity to do a trip like this, take it. Trust me, you will not be disappointed.

Story and Photos by Jordan Szoke, Transcribed by Amy Szoke

What to Look for in a Sports Drink

What to Look for in a Sports Drink