Riding the Great Divide: Off-Road Adventure from Alberta to the Mexican Border

The Continental Divide of the Americas. The name alone conjures up images for me. I’ve been reading about Canada-to-Mexico rides along the divide for 10 years now, and had included such an excursion on my bucket list. Last year, it finally happened. Fifteen days, two provinces, six states and eleven adventurous riders on dual sport motorcycles. It was the perfect motorcycle holiday.

A number of Canadians planned such an adventure last year, but the logistics of such a ride are quite difficult. How do you get bodies and bikes to a start point and then home afterward? To this end, I broached an idea to Barry Ferguson of Cliffshore Adventures (Port Hope, ON), and we devised a plan to deliver the motorcycles and gear to Calgary, run interference a few times en route and retrieve all of the bikes and equipment in El Paso, TX to return home. The participants would share the cost, and Barry’s parents would drive the support vehicle.

Lorenz Calcagno and Meg Thorborn of Guelph, ON had ridden the Continental Divide from BC to California on two occasions, and provided us with GPS routes, tracks and a tonne of advice. Thanks Lorenz.

The entire group consisted of three teams. There were Mike and Michele Bell, ‘Team Hell’s Bells’. The second group, ‘Team McCoy’, consisted of Captain John McCoy and son Mike, Peter Colpitts, Dave Head, Paul Hopkinson and John Harvey. The final four, ‘Team Sno Flake’, was made up of Brian Obrist, Bob Kendell, Ben Angi and myself. The Bells departed a day early and weren’t seen by us until El Paso. The remaining teams usually rode separately but we regrouped each evening. 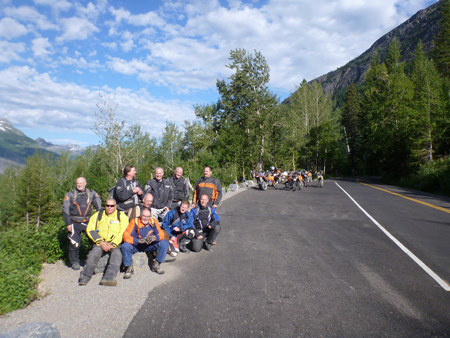 A very small window of time exists each year that allows passage over the highest passes in the Rocky Mountains, so we decided that the last two weeks in August might be ideal. Over the next fifteen days we would rack up 5300 kilometres, cross the Continental Divide eighteen times, open and close more than fifty farm gates and cross hundreds of cattle guards. The total fuel bill for our four-man team was $800, or about $13 per rider, per day. What other motorsport can be enjoyed for thirteen bucks a day?

On August 12th, the adventure began. Once off the airplane in Calgary, we met up with our support crew, John and Joyce Ferguson, and quickly escaped the city with a 40-minute drive west to Cochrane and my friend Daryl Copethorn’s ranch, an ideal point to start our ride. The players were soon unloaded, dressed and on our way.

Planning is everything, but within the first five kilometres my route plans went awry. The network of grey lines I had plotted on the GPS turned out to be private, posted and gated. Sigh. On to Plan B, which kept us on pavement south past Longview on Highway 22 until we could connect with Alberta Branch Road 532. Once off the pavement and into the foothills, it seemed our adventure had finally begun. We wrapped up the first day with reserved rooms in Coleman, AB, gateway to the Crowsnest Pass. Our chase vehicle unexpectedly arrived, and the entire crew was able to enjoy a relaxed dinner. 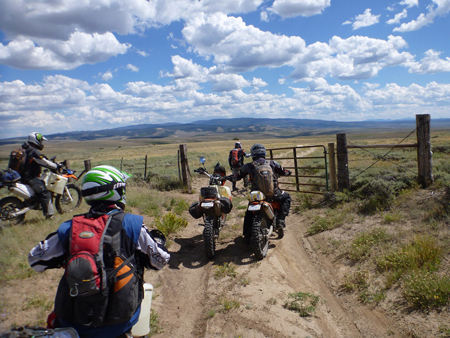 Our second day would keep us on pavement over ‘the Crow’ through Sparwood, Fernie, Elko and finally to Rooseville and the US entry to Montana. Continuing south, at Fortine we turned east onto a newly-paved goat trail of a road that lead into the Whitefish Mountain range through the Flathead National Forest — an hour ride that rated at least a nine on my grin scale. No one could understand why such a narrow road would be paved, but no one complained. The day ended at a hotel in Whitefish, Montana.

On day three, both teams decided to do a side trip and climb to the 6,646-foot Logan Pass, which was our second crossing of the Great Divide. This was a touristy ride more suited to Gold Wings than our duals, but everyone seemed satisfied that we had done it. After Logan, we continued south following a network of secondary gravel and paved roads along the western slope of the Swan Mountain Range. We finished the day at Three Bears Motel in the town of Lincoln, MT. We learned that another group of Canadians, the HORRA team (Halton Off Road Riders Association), had stayed at the same place the night before. This was the first of numerous times we would learn of this group of strange sounding Canadians who were just a day ahead of us. 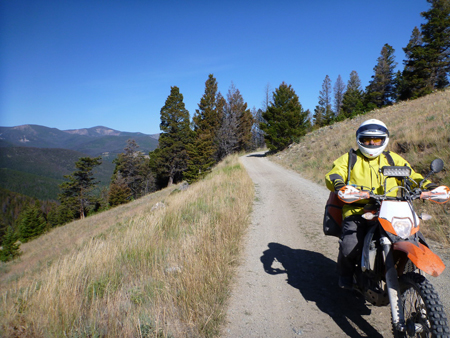 After Lincoln, we encountered the toughest part of the ride: Lava Mountain. With our southerly direction, gravity helped us with most of the difficult stuff, though there were a couple of climbs, nonetheless. We finished the day at Wise River Hunt Club, an interesting name for a hotel/bar and RV park.

The dawning of day five came with a bit of a shocker when we found a heavy coat of frost on the bikes. Everyone dug deep in their luggage for Cold Pro gloves and extra clothes. Though our chase vehicle had caught up with us, this would be the last time we saw them until El Paso.

We had planned for long distances without fuel availability through Wyoming, and each of our riders had super large tanks or was carrying extra fuel. Contrary to what we had been told, fuel was available — but only for motorcycles — at Bill’s Gun shop in Atlantic City. We hadn’t needed the super supply after all. This village, a city in name only, also boasted a great saloon and restaurant. 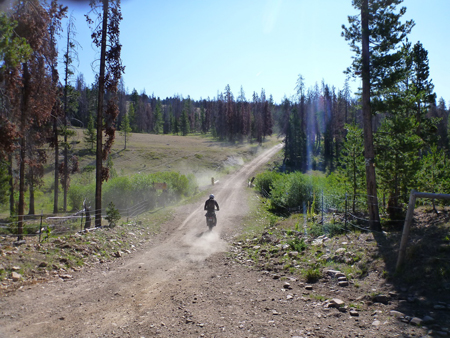 My lasting memory of the Great Divide Basin in Wyoming is that there is a whole lot of nothing, surrounded by even more nothing; an enormous area of free-range cattle country. We eventually hit the pavement en route to Rawlings, WY to end the day.

By the ninth day we had reached a point where tire wear was noticeable, and some guys were seeking fresh rubber. Believing that tire selection and supply might be limited in the small towns we would be passing through, one team scoured Rawlins, while the other pushed on towards Steamboat Springs, Colorado. Angi, Kendell and O’Brist installed fresh tires at Steamboat Powersports, a multi-line dealership. Because I am so easy on the throttle (and thrift-minded), I thought I could go the entire distance on one set of Kenda’s. I did.

In the early afternoon of our 10th day in Dillon, CO, Paul had a slight altercation at a busy intersection with an impatient commuter; he ended up under the car with a ride-ending broken shoulder. Though it was still early in the day, both teams booked rooms and drank a few beers while we awaited the outcome of Paul’s hospital visit.  Luckily we were in a town with an airport, so arrangements were made for Paul to fly home. Our chase vehicle would retrieve his scooter in a couple of days. 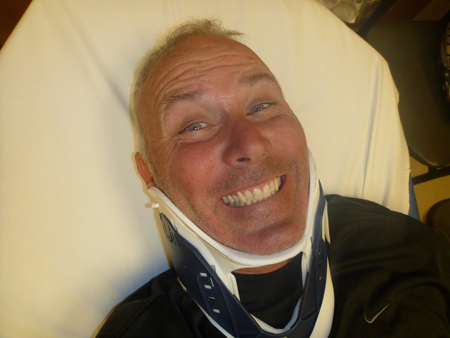 On the evening of day 13, both teams had settled in a Best Western Hotel in Grants, NM just as it started to rain. A couple of hours later, a sodden three-rider HORRA team finally made it out of the desert and caught up with us. They tried hard to ply us with alcohol and disrupt our strict bedtime schedule, but sanity prevailed and by midnight the lies had ceased and all of the Canadians were sawing logs.

Traction in the New Mexico desert after rain is nonexistent, so we chose to spend the first couple of hours this day on pavement in hopes that the desert dirt roads would dry out a little. Pie Town, NM is a location we had been planning on visiting, but when we got there, half of the pie selling establishments (two) were closed.

There was no fuel in Pie Town, so a detour to the town of Reserve was necessary. A faint-line network of roads back to our original route turned out to be one of the best rides of the trip. The paved road led to two-track which became very faint two-track leading up and over the Elk and Black Mountains, and eventually back onto our GPS route and into Silver City to end the day. 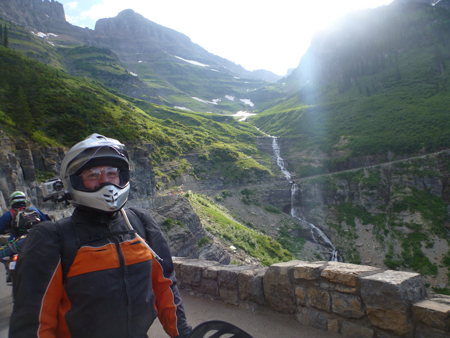 Silver City, NM sits in a part of the state that separates mountain from flat desert and our final route south. The ride to the Mexican border (for the necessary photos) and then east to El Paso was the hottest and flattest riding of the entire trip. Although there was opportunity to do some exploring, the heat and the overt presence of the US Border Patrol every couple of minutes dampened the enthusiasm, so we unanimously decided to ride Highway 9 into El Paso and finish the ride. The final day would be spent washing bikes and lolling poolside. It was a fitting finish to our holiday.

A similar excursion is currently being planned for this August, a six-state ride starting in Montana. Most of the riders from the Continental Divide trip have already committed. A good thing is worth repeating, right? 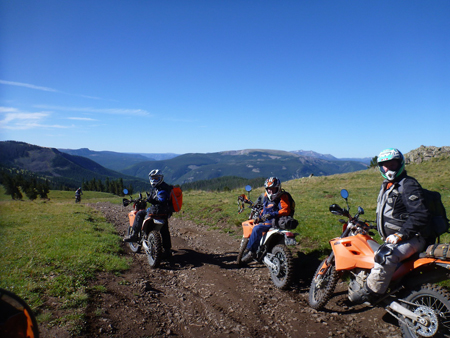