Ride To Eat – food, friends and motorcycles in Alberta

Not all of my motorcycle travels are weeks-long grand adventures. Sometimes, it’s just a ride and a meal – commonly called a Ride To Eat (RTE). Of course, the riding and the eating are made all the more enjoyable by adding friends and conversations and laughter.

As the riding season wound down last fall, I wanted to do something a little different since my wife Mary and I had completed all of our planned major touring. Mary decided she needed some quality time with the garden, so I pulled out a map and picked four destinations within easy riding distance of our home in Edmonton and, not knowing if anyone would be willing and able to come along, told all my riding friends.

It’s hard to get enough of the Canadian Rockies, so Jasper was the first destination on September 7, allowing us to get in and out before the weather had a chance to turn too cold. As hard as it is to believe, Jasper is also nearly perfectly located. Riders from around Edmonton have a straight shot along the Yellowhead Highway, friends from up north in Peace River Country can scoot down Highway 40, and even motivated Calgary area riders can get to Jasper fairly easily up The Icefields Parkway.

The sky was grey and the temperature was a cool 15 degrees as we gassed up in Hinton, but it turned out to be a picture-perfect September day, the dash showing 21 in Jasper. Barry, Mac, Rob and I had left Edmonton and met up with Al and Glen from Grande Prairie just as we were entering Jasper National Park. The L&W Restaurant in Jasper was our target due to the excellent Mediterranean-inspired items on their menu.

Proving that timing is everything, three others arrived late just as we were heading for the door, and Bruce came up from Calgary, but he was a week early and wasn’t about to wait a whole week for us! Some riders took the splendid diversion to Maligne Lake and a couple of the guys did a run down The Icefields Parkway and back home via Rocky Mtn House. 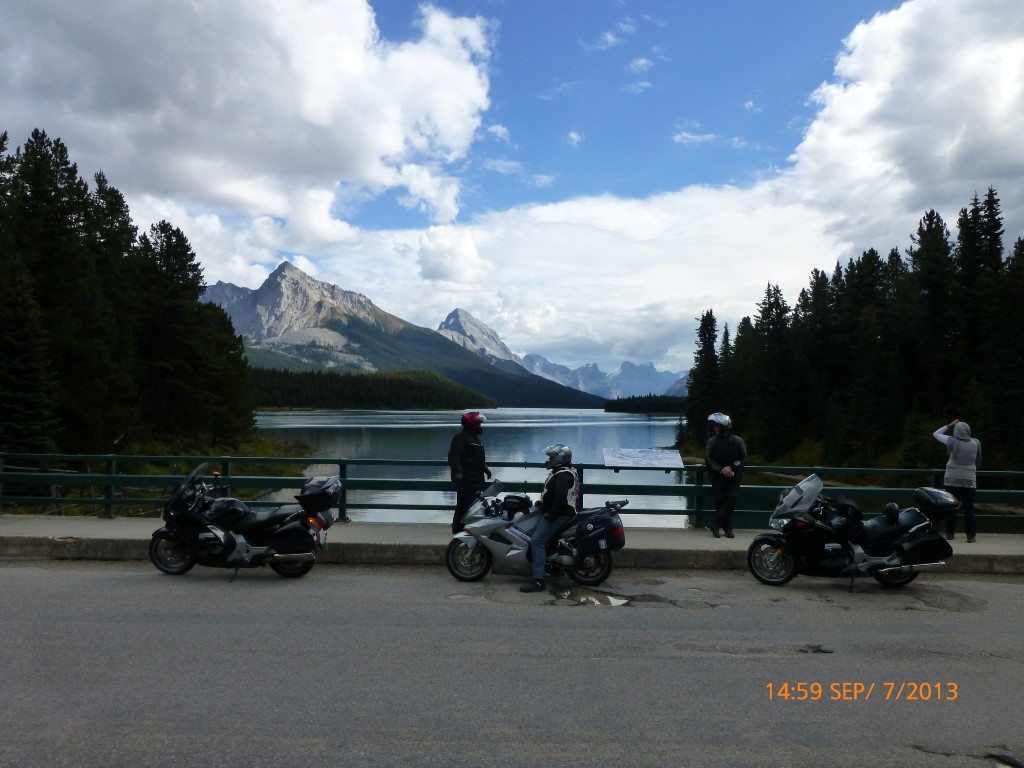 I was joined by Rob and Joe on the following weekend as we headed northeast to Glendon. On the way we picked up some of Stawnichy’s terrific pepperoni and sausages in Mundare. Advance planning ensured we had insulated bags and cooler packs. The Pyrogy Park Restaurant is right across the street from Glendon’s Giant Pyrogy statue and serves up excellent variations on this traditional Ukrainian fare. Clear skies and a high of 25 degrees made this another great fall ride. 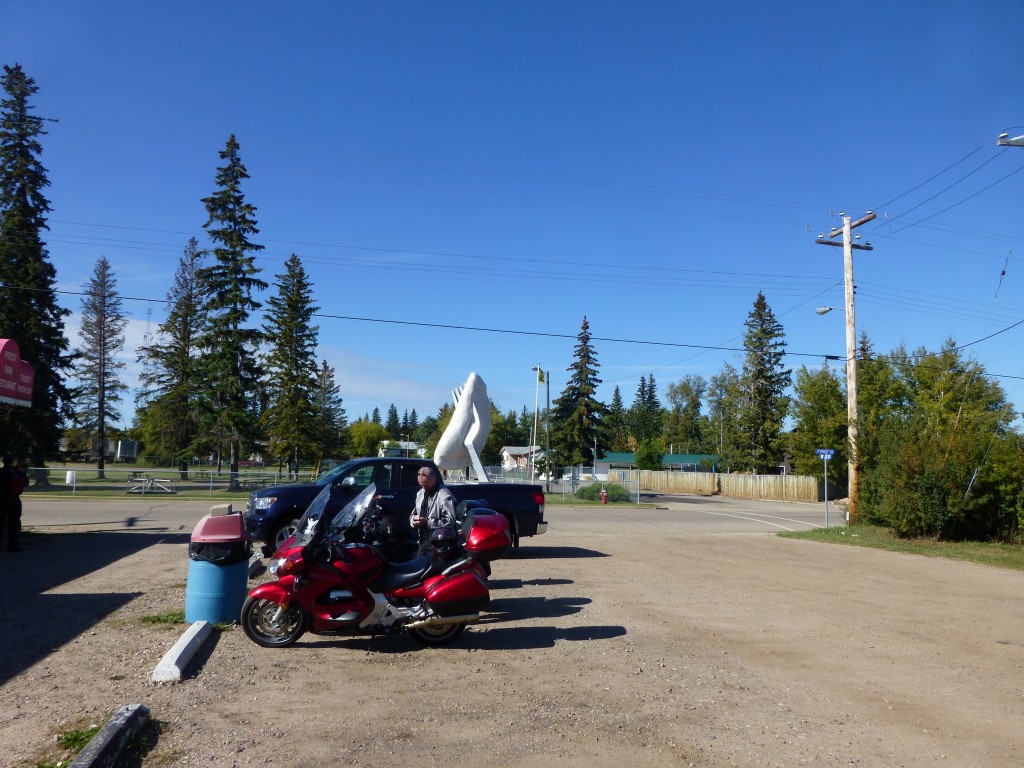 Barry, Rob and Joe joined me the weekend after that, and we headed north to Slave Lake where we were joined by Jim and Henry from Mayerthorpe and Al who came over from Grande Prairie. We enjoyed the mouth-watering menu at Alimo’s Pizzaria where such unique offerings as Jambalaya Orleans, Ballistic Chicken, and Flying Pig proved that the high UrbanSpoon rating was justified. Again, none of us were disappointed with 21 degrees for a high. 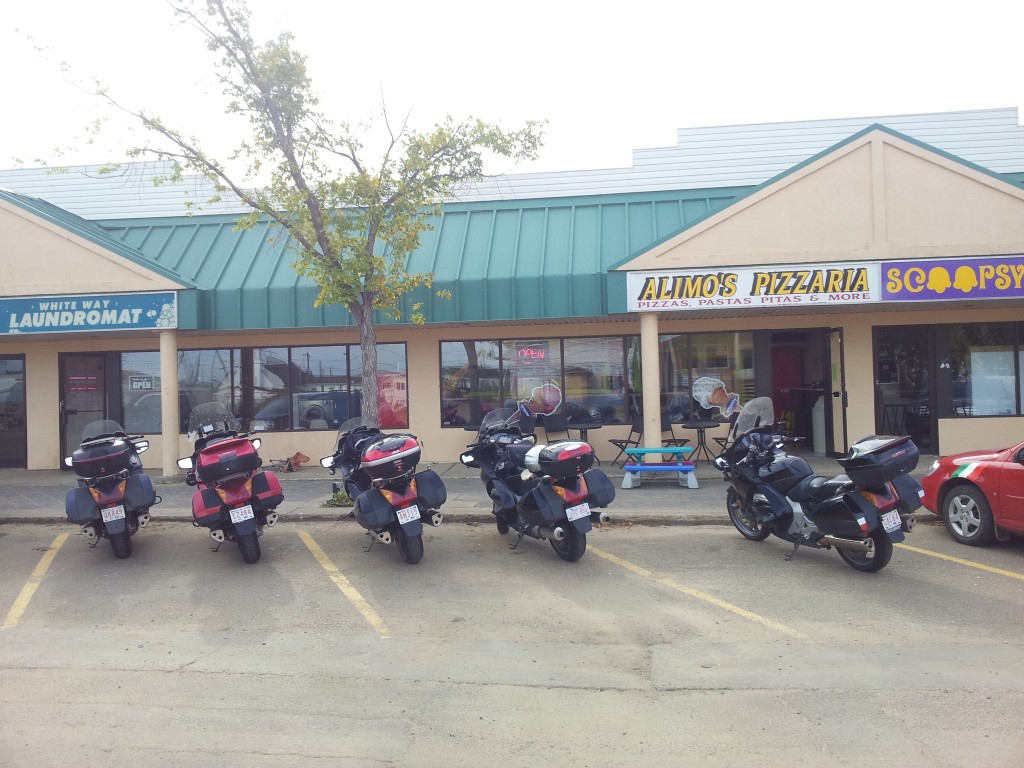 The fourth ride on September 28 closed out the month as I headed to Red Deer with Mac, Barry, James, Larry & Jan, Joe & Judy, and Darrell. With an early temperature of 7 we all welcomed the great, belly-warming stews, chilis and soups at The Donut Mill. An afternoon high of 18 under a clear September sky made for a great ride back home. 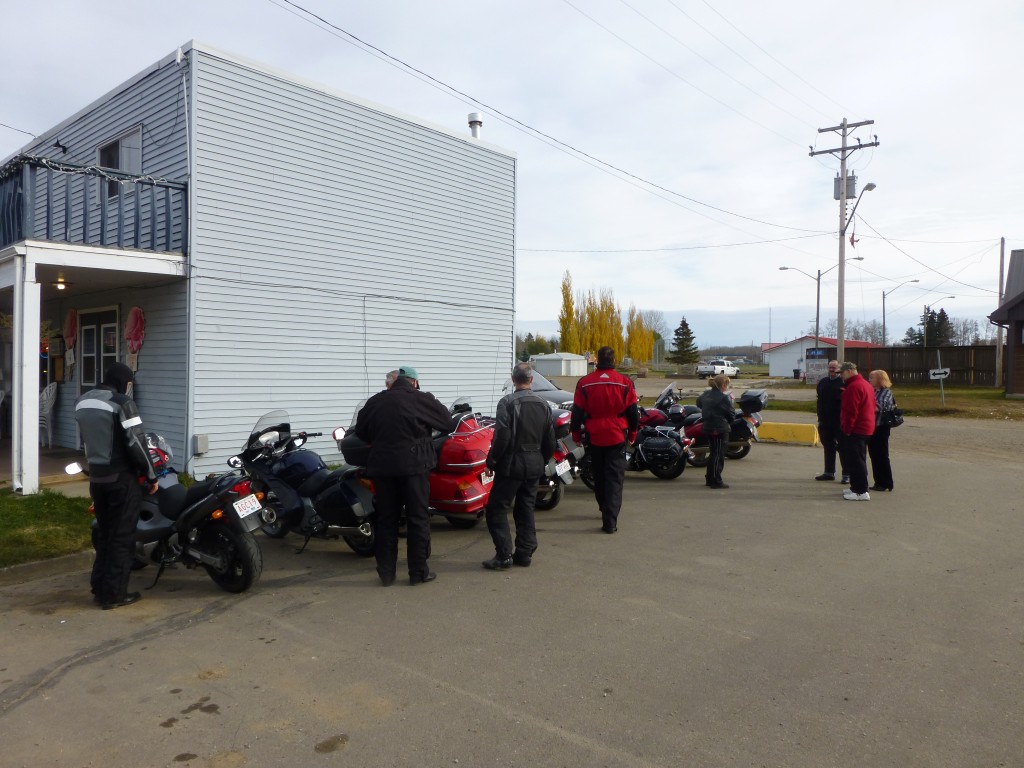 Jan had approached me that morning and said that she and her husband Larry want to get out for more rides, but often can’t decide where to go.

My answer? Just pick a place and go.

If you have to, put a map up on the wall and, using a piece of string and the map’s scale, pick a distance you are comfortable with and draw a circle around your home. Throw a dart and if it lands anywhere within that circle then that is where you will go. You are bound to find a place to eat somewhere along the way.

With the exception of Jasper, which pretty much has one way there and back, all of our RTEs featured circuitous routes. After choosing the destinations I looked at the map and just picked roads.

Over those four Saturdays we put on a shade over 2,500 km in fine fall weather and had marvellous conversations surrounded by friends and motorcycles in a variety of settings. We even had some drama when Darrell’s 1981 Yamaha XS1100 ran out of gas 16 km from Red Deer. These September rides were a great way to wrap up the riding season for many of my friends. For myself, October provided good opportunities for solo trips and I put on over 4,300 km doing three Iron Butt Association-certified rides.

And then the forecast improved and the last weekend of October looked like we could manage one more RTE. I dubbed this the Polar Bear RTE with Alberta Beach as the destination but made it clear I didn’t expect anyone to jump in the lake. The day started out blustery and at only 9 degrees, but as Greg, Barry, Rob, Joe & Judy, Rick, Mark, and I were leaving the city, the extra layers were dispensed with as the sun broke out and the dash showed 14. In spite of the cooler temps we had the biggest turnout of all the rides including two people in a cage. Having parked his Triumph Trophy SE after our Slave Lake RTE, and undergoing heart surgery in early October, Jim got his girlfriend Carole to drive him down so they could enjoy the camaraderie at Kitt’s Restaurant. 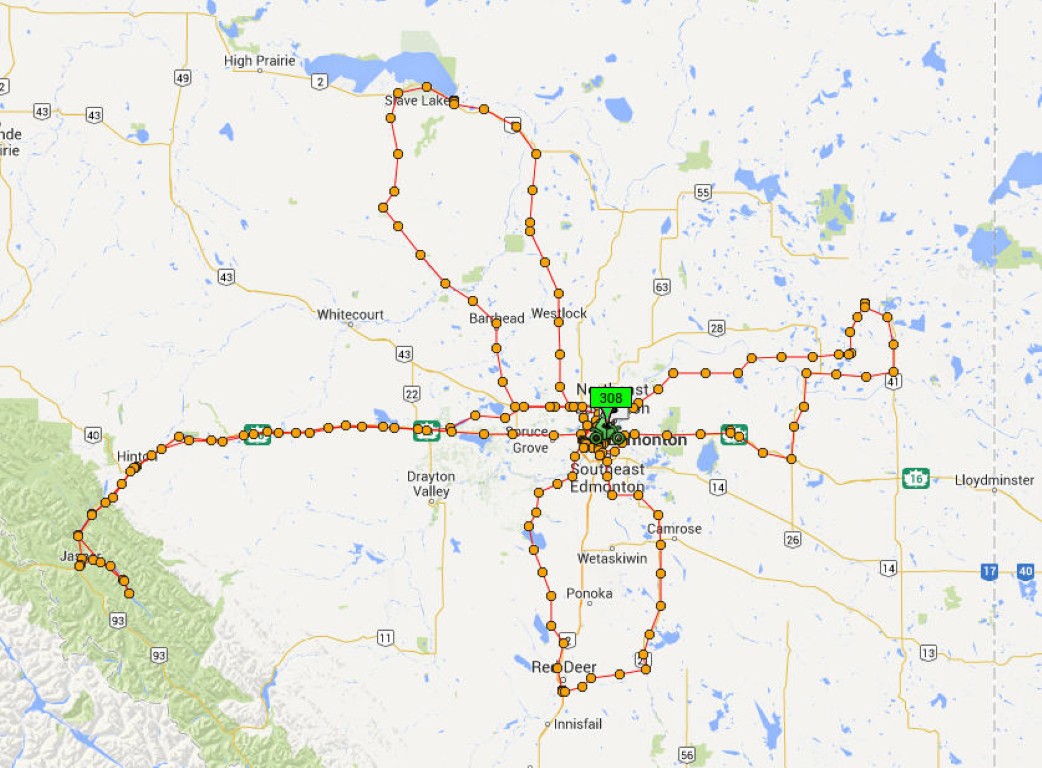 Memories of four lunches and 2,500 km of riding preserved by SPOT tracker

And then just like that, three short weeks later, we were all digging our way out from under 40 cm of snow and preparing for several months of PMS (Parked Motorcycle Syndrome). While the RTEs are over for another year, we’re all looking forward to the bike show in January and at least one Drive To Eat to help get us through winter.

Piaggio Group Americas to showcase at The Motorcycle Shows across Canada