by Mark Dzikowski
in Feature Stories
0

For the international launch of its flagship new adventure model, the 2017 1290 Super Adventure R, KTM picked the desert landscape of Paracas, Peru, four hours south of the capital city Lima. The desert terrain doesn’t reflect what we typically encounter here in Canada, but with this region having hosted Dakar stages in 2012, we knew that there were going to be excellent opportunities to test the off-road capabilities of the R version of the 1290 Super Adventure. 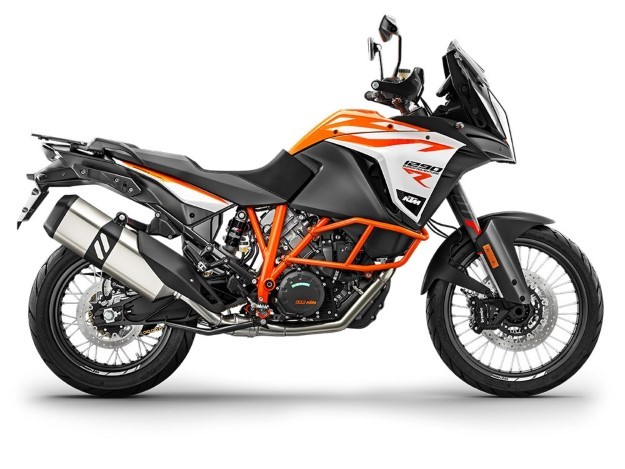 The 1290 R received a thorough makeover from its predecessor, the 1190 R. Tipping the scales at 240 kg (528 lb) full of fluids, the new model is 5 kg (11 lb) heavier than its predecessor but comes with revised suspension settings and increased fork spring rate, which translates to a more off-road capable suspension with 200 mm of travel and 250 mm of ground clearance. Another small but significant change is the new steering head bearing design adopted from the RC8 sport bike, which KTM says allows for more precise steering nut adjustment, as the previous tapered design was very susceptible to too much or too little torque on the nut, resulting in steering that was either too loose or too tight. 21- and 18-inch rims front and back, developed in-house, put the Continental TKC tires on the ground for a tubeless wheel setup that of course can be beefed up with the addition of an inner tube if you are venturing into more off-road rocky terrain like we did in the Peruvian desert.

The exhaust has built-in resonance chambers, which reduce emissions but still retain the massive 160 horsepower and 103 ft-lb of torque generated by the 1,301 cc 75-degree V-twin powerplant. The engine is actually a retuned version of the 1290 Super Duke R’s 177-hp engine, adjusted to increase its ridability in off-road terrain while retaining reliability (service intervals are every 15,000 km). The pistons are 3 mm bigger in diameter compared to the 1190 R, and KTM claims they are 47 grams lighter too; combined with a lighter crankshaft , this gives the big mill a more free-revving and responsive nature. The crankshaft is connected to the rear wheel via a six-speed gearbox that was smooth-shifting, and I didn’t encounter any missed shifts on the test ride. First and second gears are low enough for crawling in technical terrain, while the overdrive sixth gear made for a very smooth ride on the brief pavement sections and open desert. 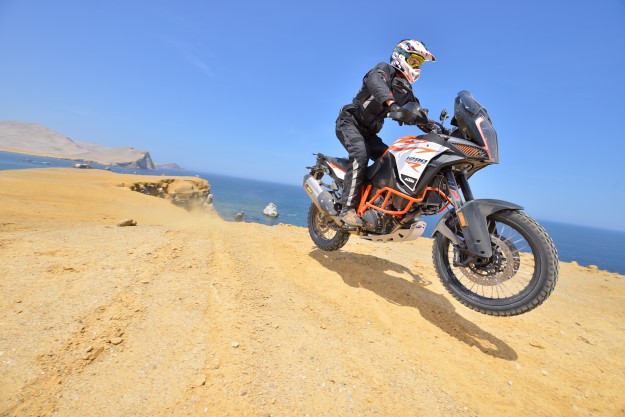 The suspension is plush and comfortable and soaked up the small rocks and minor terrain variations very well, but as soon as both wheels left the ground and came down to earth or I took a ‘G-out’ at speed, I got a reality check reminding me that this is not an enduro bike. Dialing the compression and rebound in a few clicks made some difference, but not a huge amount. The clickers are accessible on top of the fork cap for easy on-the-fly adjustment. The rear shock is a PDS monoshock design and has a very handy tool-free preload adjuster to dial in the spring preload depending on your luggage and passenger setup. 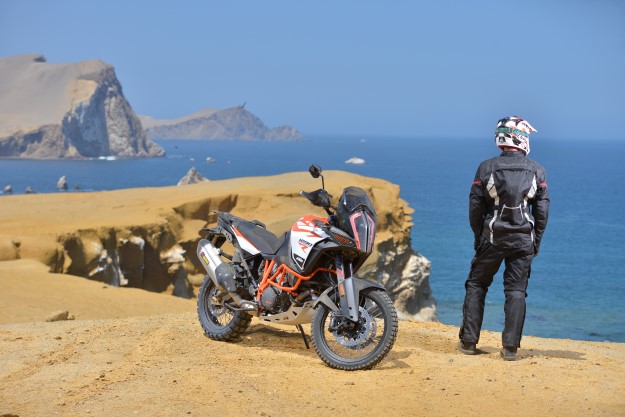 For the full review of the new KTM 1290 Adventure R, pick up the next issue of Inside Motorcycles magazine, available at newsstands across the country and at insidemotorcycles.mysub.ca.