Review: GoPro Hero2 Takes Action Video to the Next Level

You’re probably already familiar with GoPro cameras, a powerful line of wearable and gear-mountable cameras and accessories designed for action sport enthusiasts. First developed for the surf industry, GoPro has expanded its powerful line to include Outdoor sports such as cycling and skydiving, as well as a Motorsports line, with accessories tailored to the motorsports enthusiast.

GoPro has recently launched their Hero2 camera, which the company claims to be 2X more powerful than the original GoPro Hero camera in every way.

For starters, the Hero2 gets a wider lens and a slightly larger sensor, which supports a broader field of view at 1080p. The Hero2 will shoot 1080p video in 170 degree wide angle, versus only 127 degrees in it’s predecessor, the original Hero. Of course, if a wider angle does not suit your purposes you can also set the camera to shoot in 127 degrees or 90 degrees for more close-up action in 1080p. Don’t need to shoot in high resolution 1080p? The Hero2 will also shoot in 960p, 720p and WVGA.

The Hero2 camera has an 11 megapixel resolution, up from the 5 megapixels on the original Hero. If memory is an issue, the Hero2 gives you the ability to switch to 5 megapixels or 8 megapixels in order to save space on your SD card. In case you were wondering, up to 32GB (class 4 or higher) SDHC cards are recommended.

In addition to high resolution video, the GoPro Hero2 also does an improved job of shooting still images. The Hero2 supports a number of capture modes including single, 10 Photo Burst (up from 3 Photo Burst on the Hero), Time lapse and Self-Timer. The 10 Photo Burst mode allows the user to capture up to 10 still photos in one second, which translates into the user being ten times more likely to get that perfect action shot than if they were using a still camera. The time-lapse mode now takes photos every 0.5 seconds, as opposed to every second on the original Hero. A class 10 speed SD card is required for time-lapse shots.

If you’re familiar with the original Hero, you will know that the display on the original camera is not the most user friendly, using code-based language to identify camera settings. GoPro has resolved this with the Hero2 by incorporating a simple language-based user interface, making scrolling through the options a much easier and more simplied task.

The Hero2 also gets some better audio options, with the addition of a 3.5mm stereo external microphone input. While we’re not certain how this will work with the rugged, plastic case that surrounds the camera (and protects against water up to 60m), the addition a microphone jack certainly opens the world of possibilities for your video– imagine you’re riding along your favourite scenic route with your Hero2 mounted to the front of your motorcycle or helmet, and you’re able to tell the story of your ride through your microphone for everyone to enjoy. 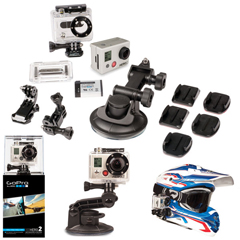 Like the original Hero, the Hero2 comes with a number of accessories which vary depending upon the package you select– Outdoor, Motorsport or Surf. The Motorsports package comes with a variety of standard accessories including a waterproof housing (197’/ 60m), a HD Skeleton Backdoor (for sound improvements), a rechargeable Li-ion battery, USB cable, one suction cup mount, one j-hook buckle, 2 curved surface adhesive mounts, 3 flat surface adhesive mounts, one three-way pivot arm and assorted mounting hardware. If you already had a number of these accessories with your original Hero, fear not all of the accessories are completely interchangeable between the Hero and the Hero2.

One nifty accessory that is “Coming Soon” is the WiFi BacPac and WiFi Remote that will allow the user to have long range remote control of up to 50 GoPro cameras at one time, WiFi video/ photo preview, playback and control using a free GoPro App, and live streaming video and photos to the web. This new accessory is expected to be available early in 2012.

The Hero2 retails for $349.99 and is available in a wide range of motorcycle and powersports stores, as well as outdoor stores and camera shops.

Overall, the GoPro Hero2 gets some nice upgrades and improvements over the original Hero and we here at Inside Motorcycles are looking forward to putting the Hero2 through the motions on the street and on the racetrack this summer.