Results from Round One of CMA Mini Roadracing National Championship Series

Round one of the CMA sanctioned Mini Roadracing National Championship Series took place June 9-10 in Regina, Saskatchewan and produced an exciting weekend of motorsport racing. The event, presented by Parts Canada and hosted by the Prairie Sport Riders Association (PSRA), was held at 3 Flags Motorsports Park. With almost 100 race class entries representing mini roadracing clubs from across Western Canada, the PSRA’s team of local racers were keen to match their racing skills against the racers from visiting clubs.

The event also included an open class supermoto race. Sadly the Supermoto Challenge was named in honour and memory of Doug Machan (a PSRA executive member who unexpectedly passed away recently). He was an avid supporter and developer of supermoto racing in Saskatchewan. The race championship went to local favourite Greg Christopherson after a lengthy wheel to wheel battle with Stu Sobering (who made a valiant race effort, having sustained injuries from a crash during practice). Greg also captured first place in Thunder and Formula Supersport, taking an early points lead in several machine classes in the series.

Special guest racer, Bodhi Edie, took advantage of the break in the Canadian Superbike Series to attend the event and take on the new crop of fast racers in the mini roadracing series. He would not be disappointed as he would find himself in highly contested battles in several race classes. Both veteran and new racers were eager to match their skills against this past mini roadracing legend (now 16 years old).

Underscoring the family focus of mini roadracing, many grids were made up of family race teams consisting of fathers, mothers, sons and daughters. The best example being the Spec Supersport class with a grid of 12 entries,  11 of which were family race team members. Additionally, the Ladies class was swept by the “Ham Sisters” Jana (1st), Robyn (2nd), and Brooke (3rd). Finally there was a strong turnout of youth racers supported and cheered on by their families. 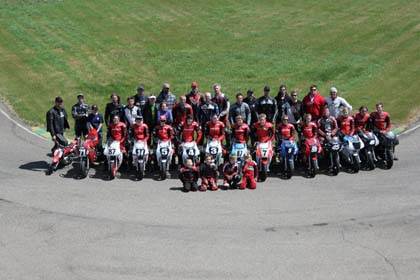 Round #2 of the CMA Mini Roadracing National Series will take place June 30/July 1, 2012 at Varsity Motorsports Park, Calgary AB hosted by the Alberta Mini Roadracing Association. AMRA President, Jay Fox , extends an invitation to make your way to “Wild Rose Country” for the next round of the Championship Series.

Jorge Lorenzo Confirmed with Yamaha until 2014