Results from Ontario Supermoto Round One at Shannonville

The 2012 Ontario Supermoto racing season kicked off June 17 at Shannonville Motorsports Park with the 2nd round of the Canadian National Championship. This was the first race promoted and run by the Supermoto Ontario Club and saw a significant increase in rider attendance from years past.

A beautiful, hot and sunny day greeted the riders and made for some great racing action on the track. The Pavement-only class got the racing started and after winning the heat race in a photo finish Evan Okopny started the main on pole position. He would get out to the lead off the start. Patrick Corcoran stalled his bike as the flag flew to start the race. By the time he refired he was nearly a lap down. Okopny took an easy victory over Corcoran in 2nd.

In the Novice class is was Serge Benoit who took the holeshot over his two sons Samuel and Jean Philippe. Evan Okopny stalked Jean Philippe for a few laps before using the power of his 510 Husky to make a pass down the long front straight for 3rd. Jean Philippe would later blow over the top of a berm in the dirt section dropping him further in the pack. Serge Benoit held his lead to take the win with son Samuel 2nd and Evan Okopny 3rd.

When the Open Amateur class left the starting line it was Stephane Dupont who led the field into the first turn. Closely behind him was Frederic Belanger, Mike Maloney and Keith Fowler. Exiting the first corner Maloney made his way into 2nd by passing Belanger. Maloney would then stall his bike in the dirt section and fall back to 4th place. Back on the pavement Fowler would get past Belanger for 2nd by taking the inside line through the left hand sweeper. Maloney reeled Belanger back in and made the pass on the brakes into turn 1 but Belanger would take the lead back exiting turn 1. Maloney tried the same move the next lap but was able to hold the position. Out front Fowler was doing his best to chase down the leader Stephane Dupont. Despite posting a faster lap time Fowler would have to settle for 2nd. Dupont took the win over Fowler with Maloney 3rd. 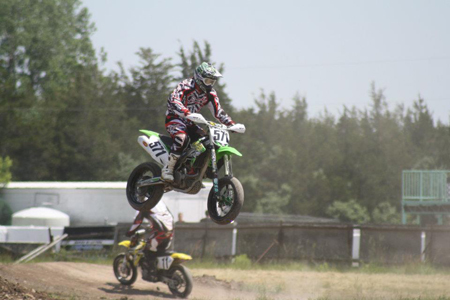 In the Veteran class it was Francois Asselin who took the lead from the start and opened up a quick gap over the rest of the field. Keith Fowler got a good start from the 2nd row and quickly made his way into 2nd place with Albert Cule behind him in 3rd. At the mid point in the race Fowler was closing the gap on leader Asselin. Fowler wasn’t able to get into striking distance and finished the race out in 2nd. The final results were Asselin 1st, Fowler 2nd and Clue 3rd. 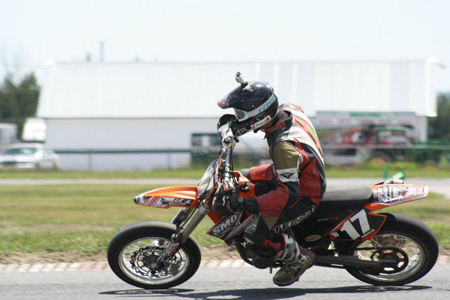 Steve Scharfe took a wire to wire victory in the SM2 250cc class. Behind him the Benoit brothers Jean Philippe and Samuel put on a great show passing each other multiple times per lap. In the end it was Jean Philippe who crossed the line in front of his brother Samuel Benoit for 2nd and 3rd respectively.

New for this year, the SM1 Semi Pro and Pro Open classes feature a 2 moto final where the results from the 2 finals determine the overall finishes.

In the first SM1 final Steve Scharfe led the pack into the first corner ahead of Francois Asselin and Stephane Dupont. It was determined that Scharfe had jumped the start and was black-flagged as a penalty and was dropped back in the pack. After a bad start Sam Harris raced back to make his way into 2nd place behind Asselin. Scharfe would also race back after his penalty and claim 3rd in moto 1.

Moto 2 saw Asselin take the lead off the start and open up a gap over Harris and Scharfe. Dupont went down in the first corner of the dirt section dropping him to the back of the pack. The battle of the race was between Harris and Scharfe. They passed each other a handful of times. On the final lap it was a drag race to the line where Harris edged out Scharfe for 2nd. Francois Asselin took the win with an impressive ride. 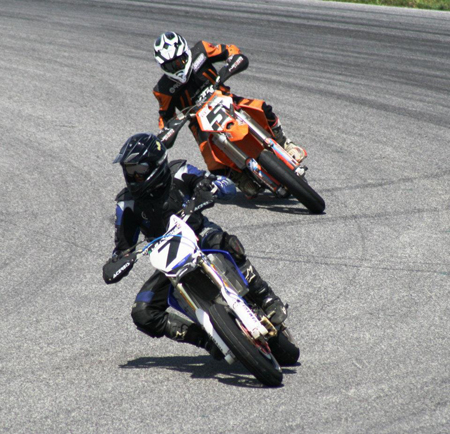 The first Pro Open moto saw Michael Martel grab the holeshot with Dave Arnold following closely behind. A couple laps in a bobble by Arnold let Martel extend his lead. Arnold wasn’t able to close the gap and settled for 2nd. The battle for 3rd between Paul Rouillard and Andy Cule was fierce. The two of them had a good close battle for the entire moto. Rouillard led Cule who was never able to make a pass stick. Martel took his first Pro Open moto win over Arnold and Rouillard. 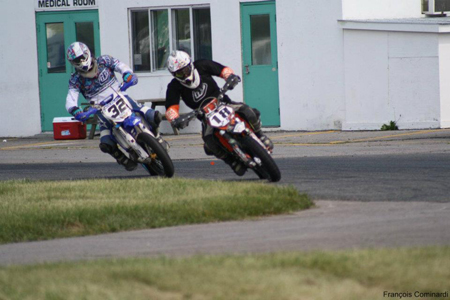 In Moto 2 it was Arnold who got a great start and led Cule and Martel into the first corner. Martel was able to get around Cule on the pavement for 2nd place. The Rouillard/ Cule battle from moto 1 continued however, this moto Cule was out front. Just like moto 1 the 4th place rider wasn’t able to make a pass. Moto 2 resuts were Arnold with the win, Martel 2nd and Cule 3rd. 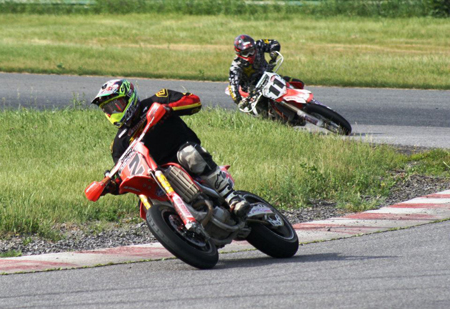 In the Amateur ATV class Jean Charles Desjardins took the win ahead of Jeremy Bouchard and Michael Marcil.

When the Pro ATV’s took off into turn 1 it was Mathieu Robitaille who made it there first ahead of Daniel Latour and Sebastien Gauthier. Robitaille stalled his quad in the dirt section and fell to 3rd. Robitaille chased down Gauthier and tried to make a pass on the inside into turn 1 but couldn’t make it stick. Sylvain Arsenault reeled in the lead pack and on the last lap, drag raced Robitaille to the line and took 3rd place in a photo finish. Latour took the win over Gauthier and Arsenault.

The races were great and it was an awesome first event for the Supermoto Ontario Club. Thanks to all the racers who put on a great show. Round 3 of the Nationals is in Quebec at the Mecaglisse Circuit July 14-15 and Round 4 returns to Shannonville Motorsports Park September 15-16.