Fastest man in eastern Canadian roadracing at the start of 1981 was Rueben McMurter, in his second full season as a Pro with Kawasaki superbike equipment.

Exactly forty years ago – May 3, 1981 – marked a significant day in the history of motorcycle competition in Canada. This is the anniversary of the first event staged at Shannonville Motorsport Park by the new sanctioning body RACE, or Roadracing Association Canada East, as the group was then known.

Blessed by good weather, the debut of RACE went about as well as could be expected, with big fields and a strong spectator turnout. Top gun at the opener was Rueben McMurter of London, Ontario, a Pro entering his second full season of Expert level competition.

Twenty-five-year-old McMurter won both the Superbike and Formula One races on his Kawasaki KZ1000 MK II, defeating his mentor, Canada’s ‘father of Superbike racing,’ Lang Hindle. As the new leader of the Kawasaki Canada program, Hindle was developing the latest ‘J’ model 1000.

While the next gen ‘J’ Superbike would eventually be dominant, at the start of 1981, the previous model as built by McMurter crew, including Father Earl, was the machine to beat. Both McMurter and Hindle had shown well in the U.S. during early season activity south of the border.

Perhaps the most memorable event at Shannonville 40 years ago was the mass arrival of the new Yamaha RD350LC. The first liquid-cooled, mono-shocked Yamaha two-stroke twin was a true homologation special, aimed at the racetrack. Almost 60 of the new LCs were on hand to compete over several classes with the new RACE tour.

Another machine making its debut was the first Kawasaki GPz, the original, all-red, twin shock 550. Although only a few were in the country, Canadian Kawasaki Motors marketing man John Barr had one to ride in Amateur action.

On Saturday morning at Shannonville, a deal was struck for McMurter to pilot the same, all-stock bike in the Pro category. ‘The Rueb’ duly held off a strong field, and an army of attacking LCs, to take the win – one of the very few times McMurter raced in a Production category. 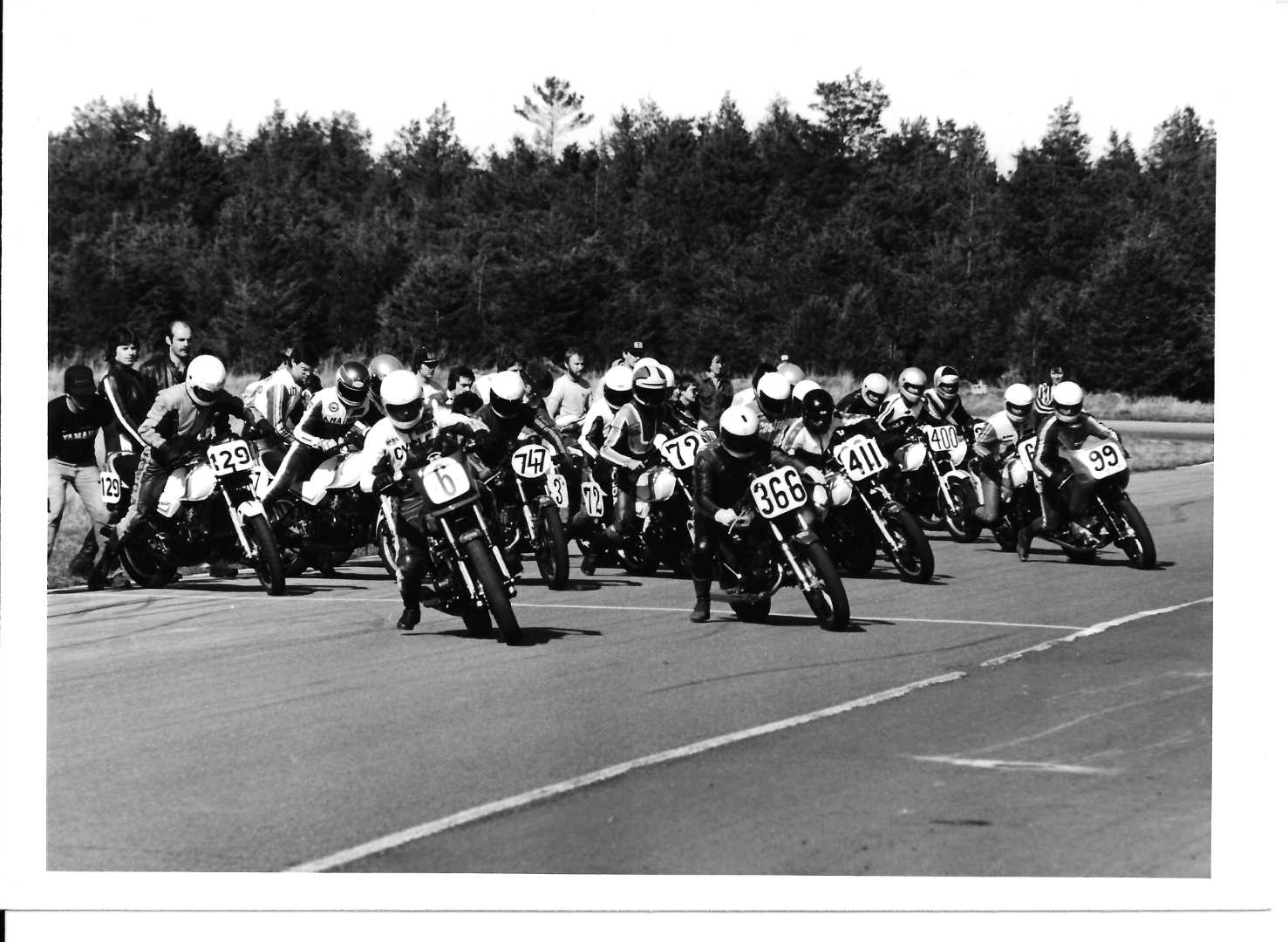 Historically, Production races in Canada always opened with a Le Mans start, competitors running across the track to jump on their machines, start them and begin Lap 1. This was business as usual on Saturday, in 1981, for the heat races.

However, a later discussion with the Pros suggested it would be better to get rid of these crazy starts, once and for all. With some newer bikes using electric start (‘on the button’) and many still ‘kick-to-go,’ you can see how this might lead to all kinds of drama.

Since its opening in late 1976, Shannonville had quickly established a prime spot with bike racers and offered events for two-wheeled racers organized by a wide range of groups. Some of the organizers came and went in just a year!

As well, the arch-rival of the CMA, the Quebec based Brimaco Championships, also held events at the former Nelson International Raceway.

I started working with Boxstrom and Track Manager Nelson in 1979, and by the next year we were wondering if it was best to try organizing the events outside the CMA, as with Brimaco. 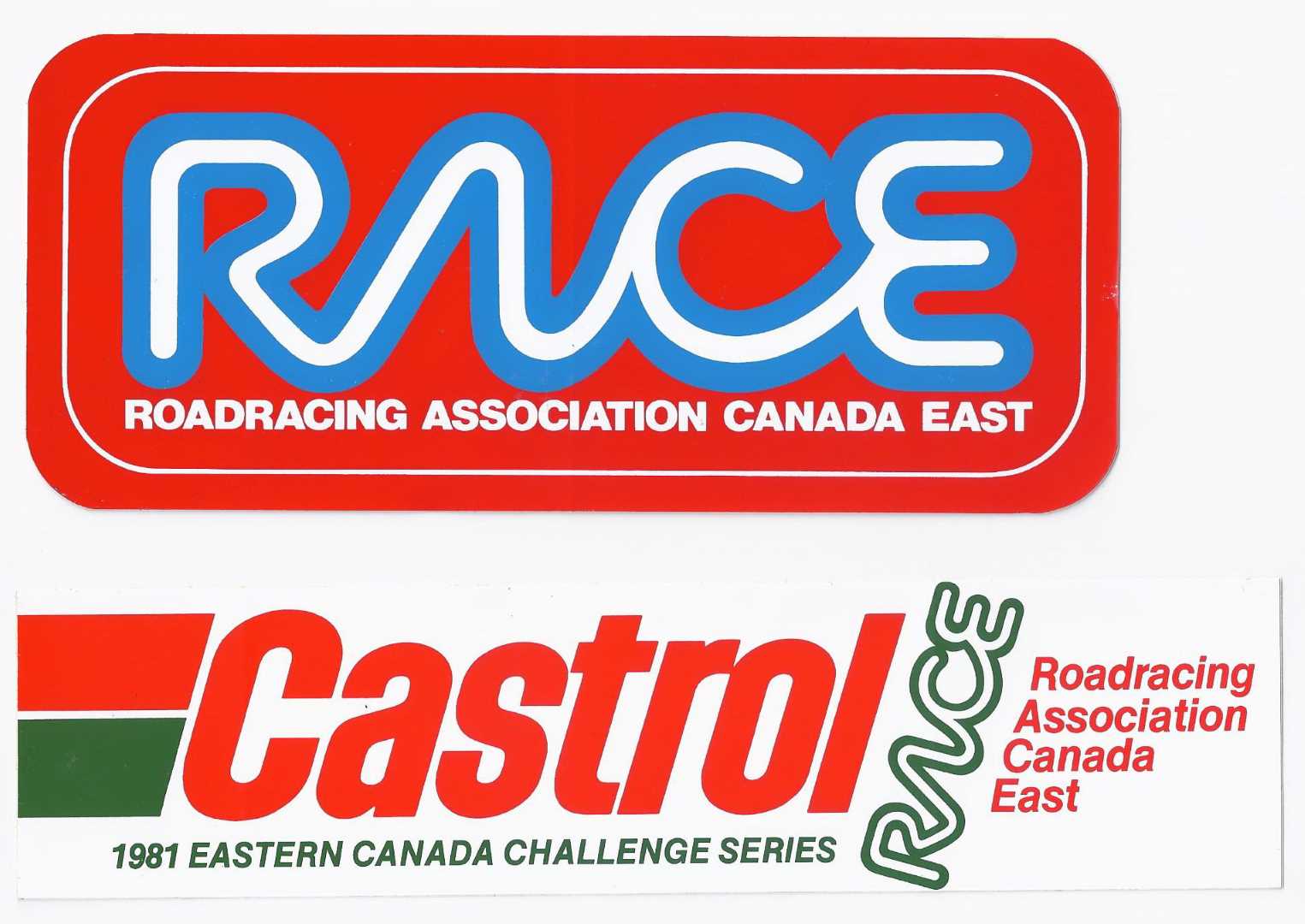 CUTLINE: Graphic material from the debut season for RACE at Shannonville Motorsport Park. (Top) Original RACE logo, designed by competitor Jeff MacMillan, older brother of eventual 1984 overall RACE # 1 Paul. After a couple of more alterations, the title of the business would eventually settle in 1986 as Racing Associates Canada Events Inc., once the series went Canada-side. (Above) Original fork leg sticker required for each competitor to be eligible for year-end points fund, courtesy of Castrol lubricants.

Rules were a big issue, and the CMA’s unwillingness to consider a Junior Superbike category was a major hurdle. Young street riders really wanted to compete on the 1000cc machinery that they used on the street.

(At this point, we should mention that in June of 1981, Art ‘The Dart’ Robbins showed up for a RACE School – another new development – on his street bike Suzuki 1000, kindly providing a crucial example of why change was inevitable and necessary.)

During 1980, it seemed like after every Ontario Regional bike event, one of our small group of Shannonville staffers really thought it was time to split from the Hamilton-based CMA, while the other would decide that events of the weekend weren’t really all that bad.

When Shannonville hosted their first-ever CMA National in September 1980, the mood seemed more certain Sunday night after the race – we could do better on our own.

Monday morning post-National, we were getting breakfast organized in the small office trailer at the track. One of the top Production racers of the day, Paul ‘Sparky’ Stokes, stopped by to visit. As with several racers, he had relaxed with his friends in the paddock post race Sunday, opting to head home Monday morning.

Stokes had raced all over North America – always on a tight budget – and was well-respected. He had also attended a CMA National at Westwood in B.C., where he was disqualified from the entire event due to his behaviour in a heat race.

Stokes had punched his tank after losing to a local in a drag race to the finish line, and we easterners really wondered If this was simply a way for the CMA to dismiss easterner Stokes and his ratty, but rapid, Honda CB750.

So Stokes’ encouragement was the last step required to start a spin-off group that turned out to be RACE. In the winter of 1980-’81, RACE hit the show circuit with a lot of big ideas and grand schemes, and eventually delivered on most of them.

The CMA stated, in writing, that the money would never work and that roadracers would once again be taken advantage of. But with the help of Castrol, the series started offering (and paying!) decent prize money.

Five years later, RACE made a deal to go to Westwood for the 1986 National opener, and the takeover was complete. Of course, the advent of the GSX-R and the modern era of sports bikes certainly didn’t hurt, and it is fair to say that RACE was a ‘right-place, right-time’ operation.

RACE certainly had a good run, until Alan Labrosse’s ASM took over the Nationals with Castrol’s help, in 1994. But that is another story. 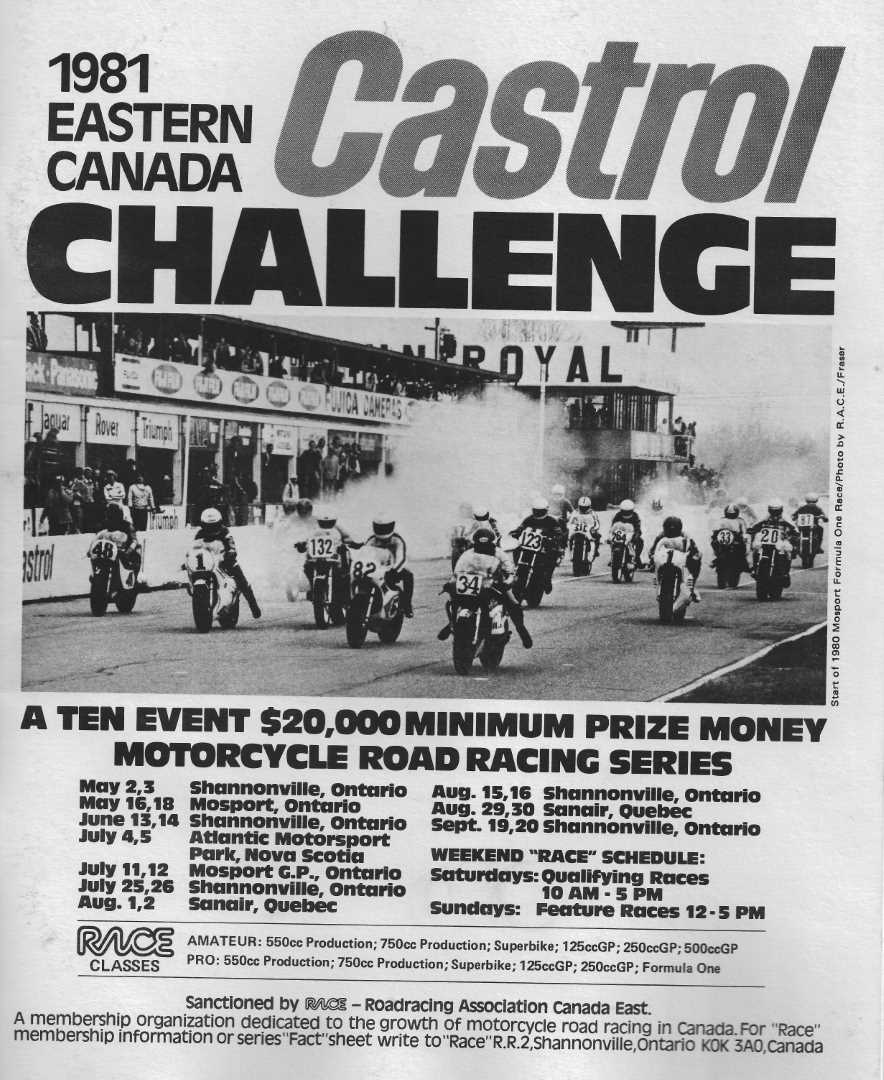