Qualifying Round One: Checa On Top as Brett Moves Up at Nürburgring

An exclusive report by Colin Fraser for Inside Motorcycles

Brett McCormick continued his education at the Nürburgring circuit in Germany this afternoon, placing his Team Effenbert Liberty Racing Ducati 1098R 22ndoverall in the opening qualifying session for Sunday’s eni Superbike World Championship doubleheader.  McCormick carved more than a second and a half from his previous best lap in his second ever session at the ‘ring.  The 2011 Canadian Superbike champ turned 14 laps of the long venue to record a best time of 1:59.712.

“I’m super satisfied with how the day went,” commented McCormick after Friday’s opening qualifying round.  “It was a really good day, lots of laps, zero drama.  I’m happy that we were productive with our time, and our lap times are coming down steadily.”

McCormick confirmed that he was analyzing his data with the intent of improving his performance through several low speed sections around the 14-corner, 5.137 km layout.  “I’m losing time exiting the tight stuff, in the low gears,” he stated.  “When we overlay my lap with (teammate Maxime) Berger’s, I’m right there except for the tight stuff.

“You forget when you’re riding that the lap is so long, much longer than what we are used to in Canada and the US.  So you see your timer and not an improvement, but then know there is more lap and more opportunity to improve further.  I feel better on the bike than the last time I raced; I can crawl around on the bike better.  Being lighter helps, and I just really wanted to get back to racing Superbikes.”

As well, McCormick was pleased that his trap speed all-out performance was better by 6 km per hour compared to this morning’s opening session, although the Ducati is down on speed compared to some of the other SBK machinery.  McCormick pushed to a best speed of 260.9 km/h, while fast qualifier Carlos Checa’s best trap on the similar Althea Ducati 1098R was a 268.7 effort. 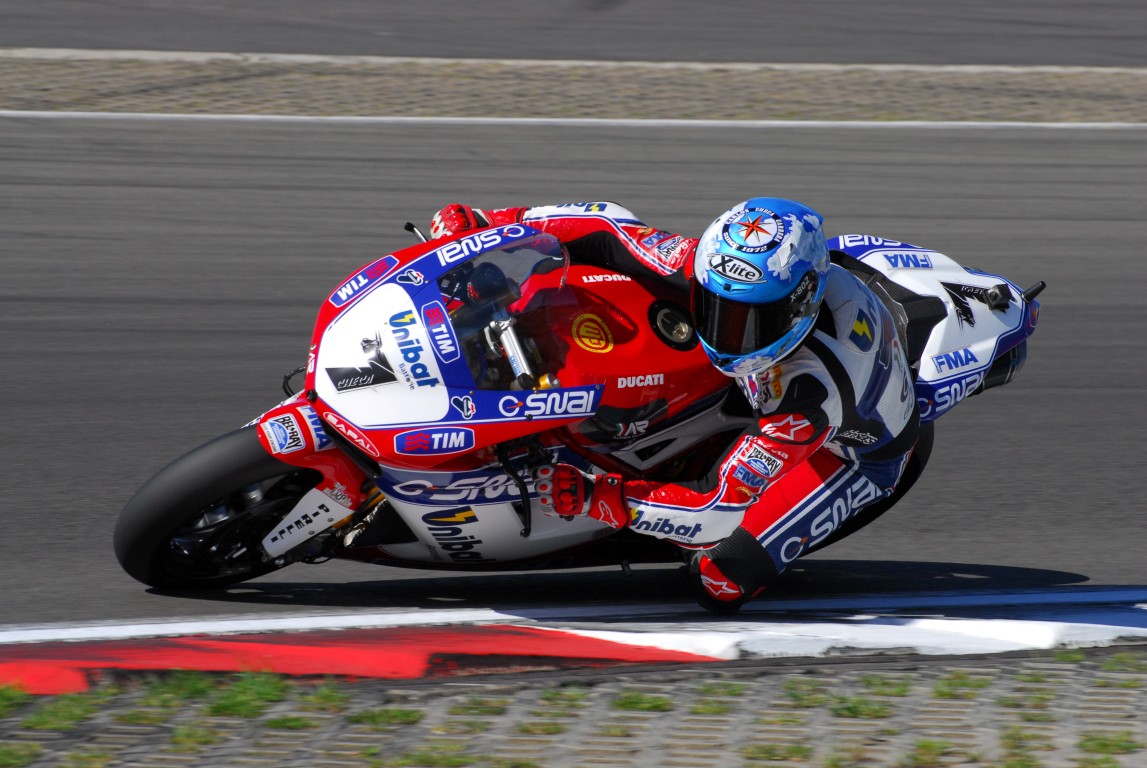 While reigning World Champ Checa was quickest in the afternoon qualifying session with a lap at 1:55.307, his trap speed was by no means strongest.  The best run was recorded by the works BMW Motorrad S1000RR entry of Leon Halslam at 279.1 km/h, Haslam turning the fifth best lap.

“The bike is finishing turns better, and we’re going from full lean to full lean with less effort too,” confirmed McCormick of the Ducati’s fabled handling.  “We have the bike set up stiffer overall, and I’m getting a feel for the Pirelli tire options available.  We have a good choice for the rear, but I’m not sure about the front yet – I may go back to what we used early in the season, I know that tire.”

Checa’s works Ducati teammate Davide Giugliano, quickest this morning, was second with a best lap at 1:55.307, almost half a second behind the World Champ.  Third belonged to the Kawasaki ZX-10R Ninja of Tom Sykes, while Eugene Laverty was fourth on the first of the Aprilia RSV4 Factory machines.

Tomorrow morning will feature another qualifying session, establishing the running order for Saturday afternoon’s three part SuperPole session.  Only the top 16 riders make it into SuperPole.  McCormick took advantage of slippery track conditions at Assen in April to earn a spot in SuperPole action in only his second career Superbike start.  This weekend at the Nürburgring marks his third career World SBK round.