Story By Colin Fraser. This feature first appeared in Inside Motorcycles Vol. 15, Issue 07

The sun is coming up on the rolling hills of southwestern Spain, and that’s a good thing.  We’re riding on sweeping, bumpy, mostly secondary back roads, and our pace has been somewhat beyond the typical motorcycle headlight’s capability.  A little more light, overall, will definitely take some of the drama out of this jaunt.

Of course, the rising sun also offers a dramatic look around at our impressive surroundings, and we really don’t need any distractions.  Although we’re on big dual sport bikes with tall suspension, our average speed is well over 100km/h, a serious pace on unknown, demanding sorta-pavement.

The reason for our early dawn trip was to make the most of a day sampling the brand new 2013 offerings from Husqvarna, the TR650 Strada and Terra. 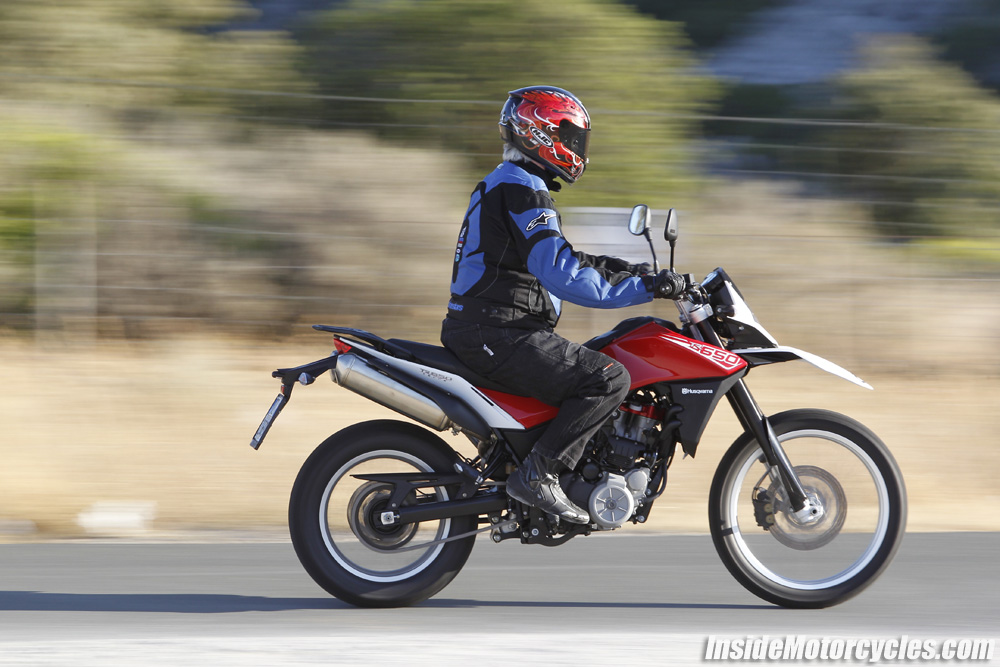 So far, we’ve been busy on the more dual sport-oriented choice, the Terra (pictured above).  Like the Strada, this TR650 model is based on the popular BMW G650GS, at least in terms of basic engine architecture.  The Husky crew took BMW’s DOHC, five-speed, 652 cc single and tweaked the fuel-injection, fitted a lighter piston, bigger valves, modified cam shafts and upped the compression, adding about 10 additional horsepower.

BMW purchased Husqvarna back in 2007, and by then the famous Swedish builder was actually operating in northern Italy, in tandem with MV Agusta in Varese.  While Husky continues to operate independently and produce their core full-blown off-road machines, the BMW ownership first bore affiliated fruit last year with the Supermoto-styled Nuda 900 twin, based on the F800GS. Sadly, we don’t get the successful, trick Nuda here in North America, but the Terra and Strada are on their way.  BMW suggest that the relationship between their home bike-building arm and Husky is similar to the parallel BMW/Mini auto division setup, and our trip on their new singles confirms that these Huskys are slightly more stylish and sporting compared to their German parent’s product. 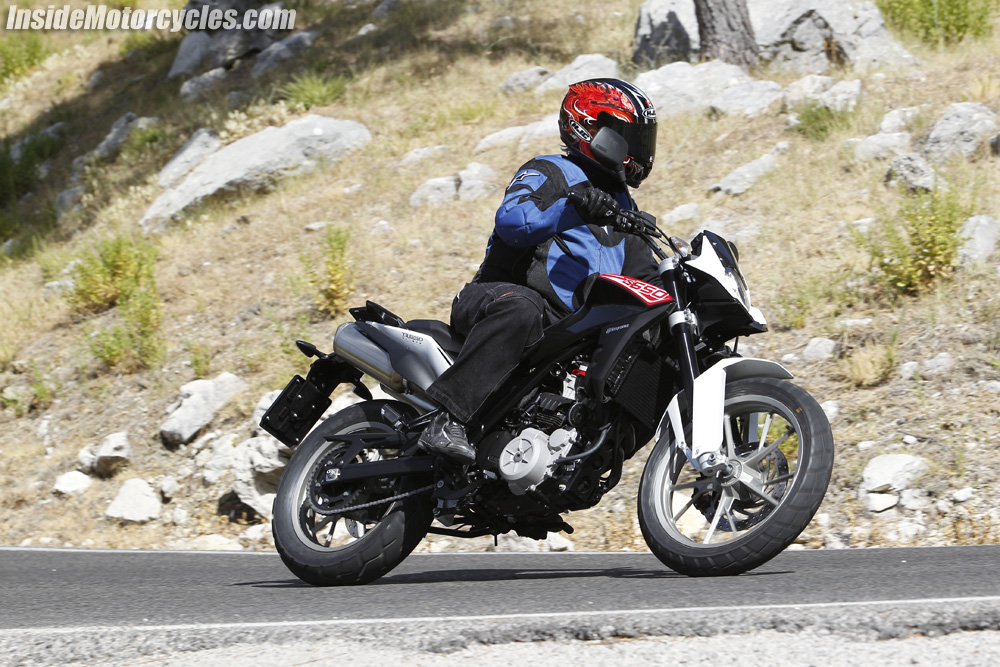 The Strada (above) is likely to be the more popular offering in North America. While truly versatile and sporty in feel, perhaps its biggest asset is the strong fuel mileage – you can expect nearly 200 km from the 14 litre tank, and by then you’ll be ready for a break from the good, but not great, saddle.

In terms of performance, the engine’s behavior is not what you might expect of a big single.  The power spread is wide, and the engine is happy to rev, not running out of breath near the top of the tach.  While the mid-range is very strong as you’d expect, the TR650s are even happier near their 8,000 rpm max, and in fact the engine will happily pull well into the red line.

The transmission is positive and doesn’t require much effort, and neutral is very easy to find.  We did experience some minor tranny troubles while quick shifting in the higher gears, but it is unlikely that many owners will behave in quite as aggressive a manner as our testers. 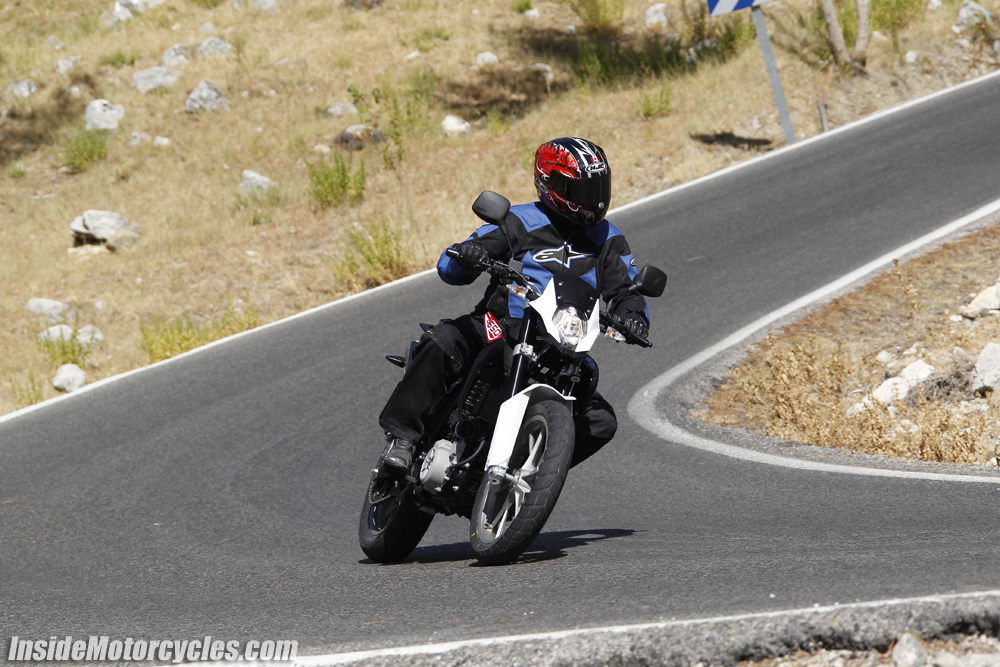 Overall performance is the same for the two Husky singles, and gearing/wheel size/tire choice variations are the reason for any differences in that regard, as the powerplants are identical.  The Strada comes standard with ABS while it’s an option on the Terra, although we cannot imagine a solid reason for opting out of the rider aid. Sure, in true off-road instances you might want to skip the ABS, but it’s easy to disable, and most of the time there isn’t a solid need to turn it off (except if you want to enjoy lurid slides).  In a similar vein, throttle response and power are such that wheelies are also no problem with these Huskys — so much for discouraging the squids!

The narrow steel frame and swingarm are all new, and the styling references Husqvarna’s famous off road line-up, including a red finished cylinder head. The Terra has slightly taller suspension with more travel, aiding off-road performance, and the fender on the Terra is high-mounted on the top of the beefy Sachs fork, rather than attached just above the front wheel as on the Strada.

The Strada was a little more poised on the street, but the Terra was surprisingly useful, even with the slightly higher perch and more dirt-oriented tires.  In fact, there is a case to be made that on the rough secondary roads where fun is most easily found (certainly in much of Canada), the Terra is a great option, and the Metzeler Enduro 3 Sahara knobby tires work very well on pavement.

Off-road, the Terra is the choice, but it is still relatively big and bulky for dirt operation.  As well, all that street gear is vulnerable to bashing, and at over 400 pounds, this bike isn’t easy to pick-up! I discovered this the hard way, and while it was mostly just embarrassing, I did struggle to right the bike when most of the weight was up hill from my position. 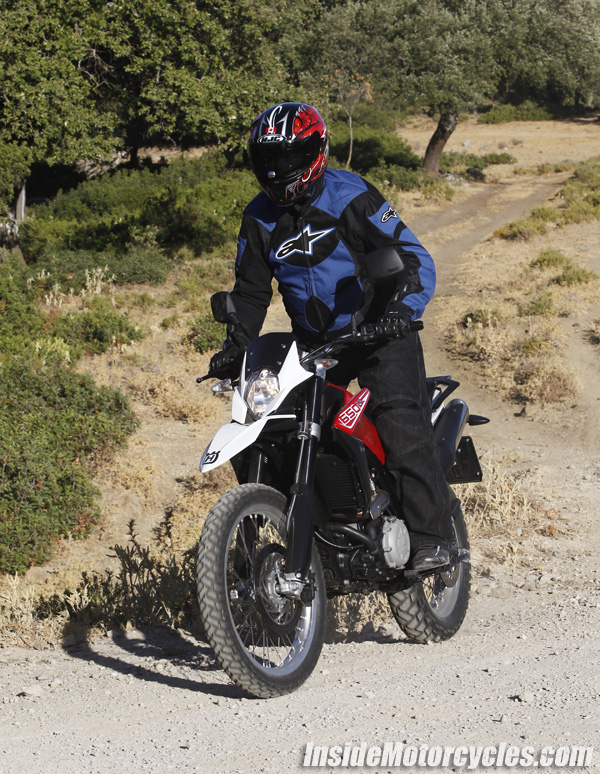 Handling is strong, well controlled and predictable, with easy but accurate steering aided by the willing and controllable power.  While this is no serious sports offering, it makes enough horsepower to be entertaining.

Another element that impressed was the stoppers.  While Brembo brakes are the industry standard, the calipers on the Terra and Strada are budget-looking.  But in operation they were strong, with lots of feel, and worked beautifully in concert with the ABS.  Grips and levers were top notch, and the overall level of fit and finish was a little more premium than with the parallel BMW 650 singles.

Both machines will cruise easily at 140 km/h, and while wind protection is minimal, there isn’t much buffeting.    The sit-up riding position and wide bars offer plenty of leverage as well as good all-round visibility, and the mirrors do a good job of providing a rear view.

Either model could be a great bike for a pilot early in their riding career, but they also offer enough performance and sophistication that you would not quickly tire of the ride.  Whether you prefer to stick to the pavement or like to get off the beaten path, the new Husqvarna TR650 Strada and Terra have you covered. 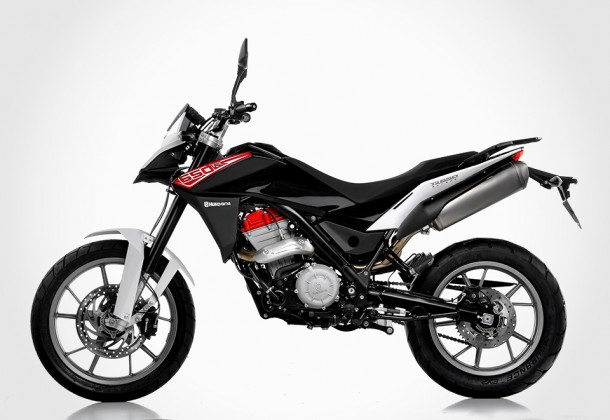 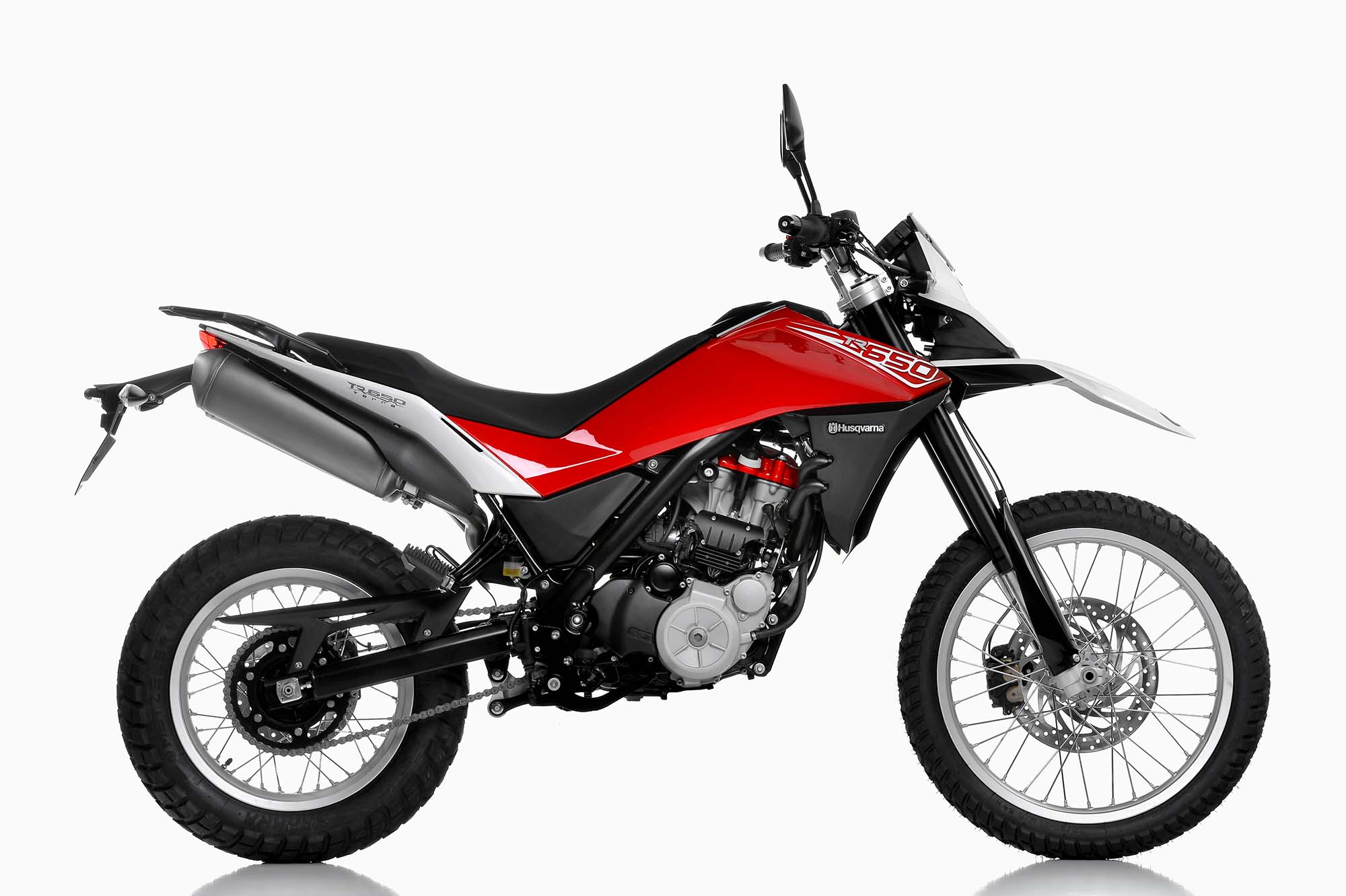