Out On Two: Y’All Need To Check Out Austin Texas

This city is about more than indie bands and BBQ

After casting around ideas about what to do to celebrate the first restriction-free holiday season in a few years, my friend and I settled on a less obvious choice: Austin, Texas. Less obvious to two Canadians because it doesn’t involve endless stretches of sandy swimmable beach, or glorious snow-capped mountains. However, wouldn’t you know it, these two avid bikers not only relished the delicious BBQ, 25-degree (Celsius) days, and wicked music scene, we got to explore on two. Thanks to Twisted Road we easily rented other people’s motorcycles and discovered that Austin not only has some sweet twisties, it also has a vibrant community of riders.

Revival Cycles and the Handbuilt Show

Revival Cycles is located on South Congress, a street lined with iconic destinations from Allens Boots to Home Slice Pizza. Everything about the retails shop is cool, and not just because there are vintage bikes hanging from the ceiling, racks of t-shirts in all colours and sizes printed with “On Any Sunday”, (among many inspiring graphics), bikes for rent, gear, accessories, and apparel, but because it hints at the full-length feature that feeds it. 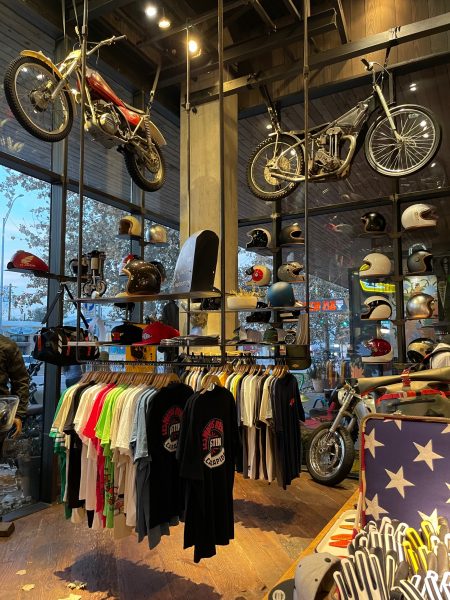 Revival Cycles HQ in East Austin is the origin story. What was once a small, specialized custom shop has grown into a massive complex where bikes are conceived, customized, restored to their former glory, or simply nudged back into working order. There is as much passion, talent, and skill contained in these rooms, as there is humility. Touring the space was truly a scintillating experience. Revival Cycles is also responsible for the yearly Hand+Built Moto Show, which conveniently coincides with the North American MotoGP stop to create what must be the most wildly exhilarating atmosphere for anyone visiting Austin, but most especially for riders. 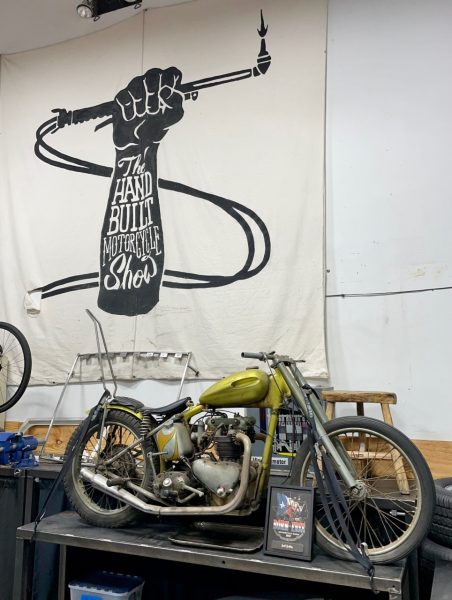 Circuit of the Americas

Did you know that MotoGP’s only North American race is at Circuit of the Americas, just outside Austin? I did not, which is why I almost drove off the road with excitement when I saw the signpost-on our way to pick up one of our two rentals, no less! The draw to see it in person was impossible to ignore which is how this photo came to be. Being that close to where the action happens was mesmerizing and worth riding past the those pesky “closed” signs. It feels as though the energy of the events has been absorbed into the track and surrounding trees. You could almost hear the engines, and the excitement, which is why I now have another item on my bucket list. 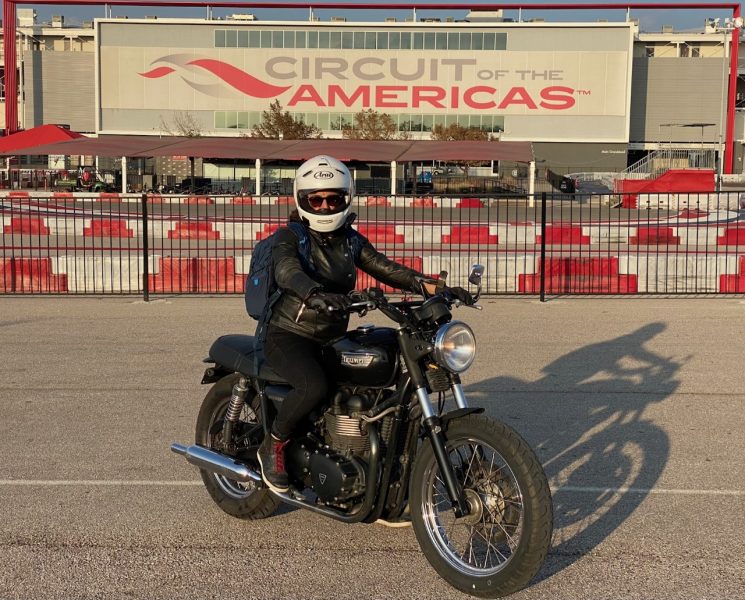 A Girl Gang and The MotoSocial

There’s plenty I will share about both these organizations in the future, but suffice it to say that an active chapter of both is a great sign. The MotoSocial, for those who don’t know, is an incredibly inclusive global motorcycle community that encourages local hosts to organize monthly events that welcome riders and non-riders alike to enjoy one another’s company and support local businesses in their neighbourhoods. Though originally begun in quiet Canada, this phenomenon has spread to over 25 cities in 7 countries around the world. In January they were still in seasonal hiatus but if you’re close by or have already booked a flight down, you can get all the info about TMS Austin’s first 2023 meet-up on the on February first. 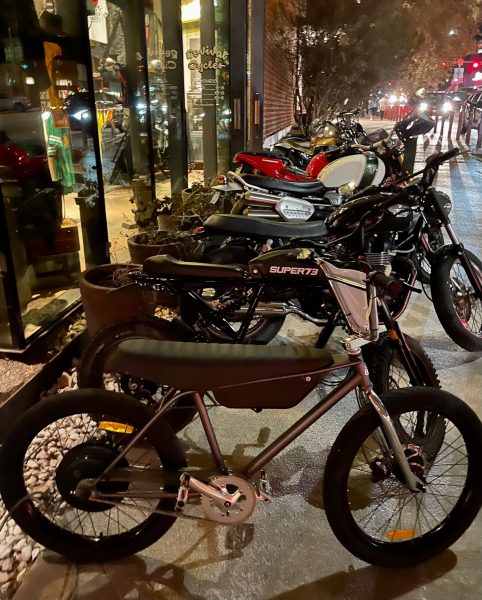 The Litas is a year-round global riding community for women to connect with other female riders close by, or far away, to go riding or share information about gear, motorcycles, courses, etc. If I’d noticed before I left town that Austin had a chapter, I’d have been invited to join fellow females to go for a spin or meet at a local spot to make new friends. Next time.

What’s the first thing you should never do when you get a new bike under you? Take it on a challenging curvy road you’ve never ridden. In fairness, we had no idea what we were about to tackle, until we were too far through. Good thing the Triumphs we’d rented seemed to know what to do, as did the Suzukis, Hondas, Harleys, and Kawasakis that passed us in both directions. Turned out, thanks to a solid recommendation from young Rory at Revival, we’d found the spot, and then we found the people at the gas station where we stopped to regroup. There we met all sorts of devotees, happy to compare stories about this road and others we might want to check out.

Anytime a place becomes famous for a type of food, there will always be a debate about who does it best. After much research we opted out of a 6-hour wait to try “Franklin’s BBQ” and instead started our trip off right at “Terry’s”. It didn’t disappoint. However, days later we found another spot thanks to a group of friendly fellow bikers. “Rudy’s Country Store and Bar-B-Q” is at a gas station that opened in the 1800’s. There we not only sampled some of the finest medium brisket and dry ribs dipped in their signature ‘sauses’, but we also cried our way through the most delicious Green Chile Stew. 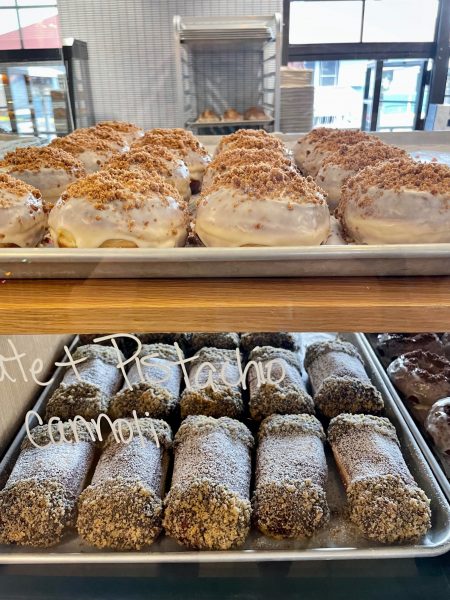 Oh, and not there, but we had grits too, and the biggest, most incredibly rich donuts I’ve ever seen or eaten. And though I didn’t commit, I certainly tried on far too many pairs of cowboy boots. And we heard some indie bands and looked for the famous nightly emergence of bats from under the Congress Avenue bridge (they don’t migrate back to Austin until March.) And we walked, and talked to lots of Texans, and best of all, we discovered that Austin is also a motorcycle city. 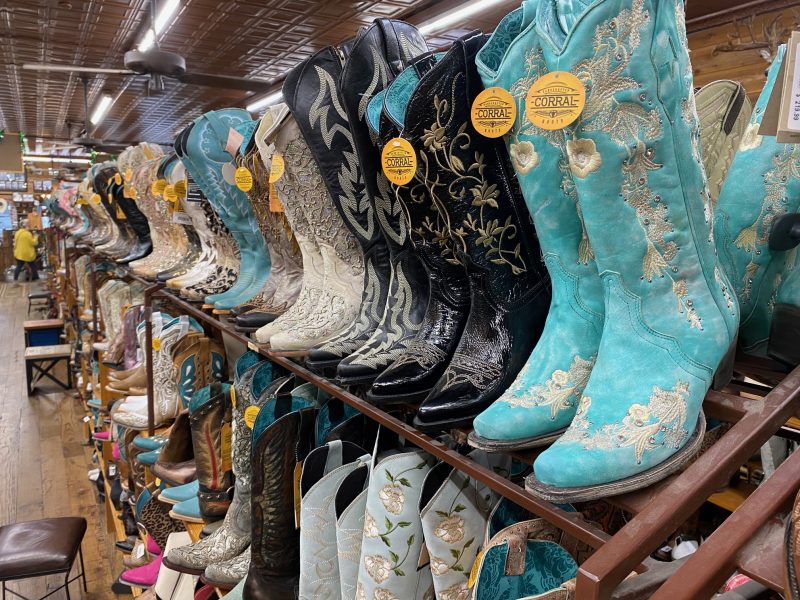 So, go there. Ride, and remember that I’m the one who told you, so you come back and share.