The weathergirl had been threatening us with symbols of thunderstorms for days leading up to the Niagara Motorcycle Ride For Dad on Saturday, June 1. When you’re committed to a ride like this (which goes rain or shine), all you can do is just hope for the best – there’s no getting out of it with so many people counting on you!

The Motorcycle Ride For Dad is a nationwide fundraiser to fight prostate cancer that has raised over $9 million since the first ride in Ottawa in 2000. Funds raised go toward research and to raise awareness of this prevalent but preventable disease.

My lovely wife/passenger Tammy and I got rained on three times on the way down from Toronto to Niagara Falls on Friday evening, but we woke up to beautiful weather for Ride day. The local radio station was still calling for t-booms in the afternoon, but what can you do? The Ride is on, come hell or high water!

Unfortunately, the weather threats resulted in a big drop in the turnout for our ride. I heard many riders say that the number of riders was way down compared to last year. Unlike myself and many others who raised funds pre-ride, a lot of folks prefer to just pay their entry fee in the morning and ride. With the horrible forecast, lots of those people stayed home. Still, about 125 people gave the weatherman the cold shoulder and showed up, ready to ride! 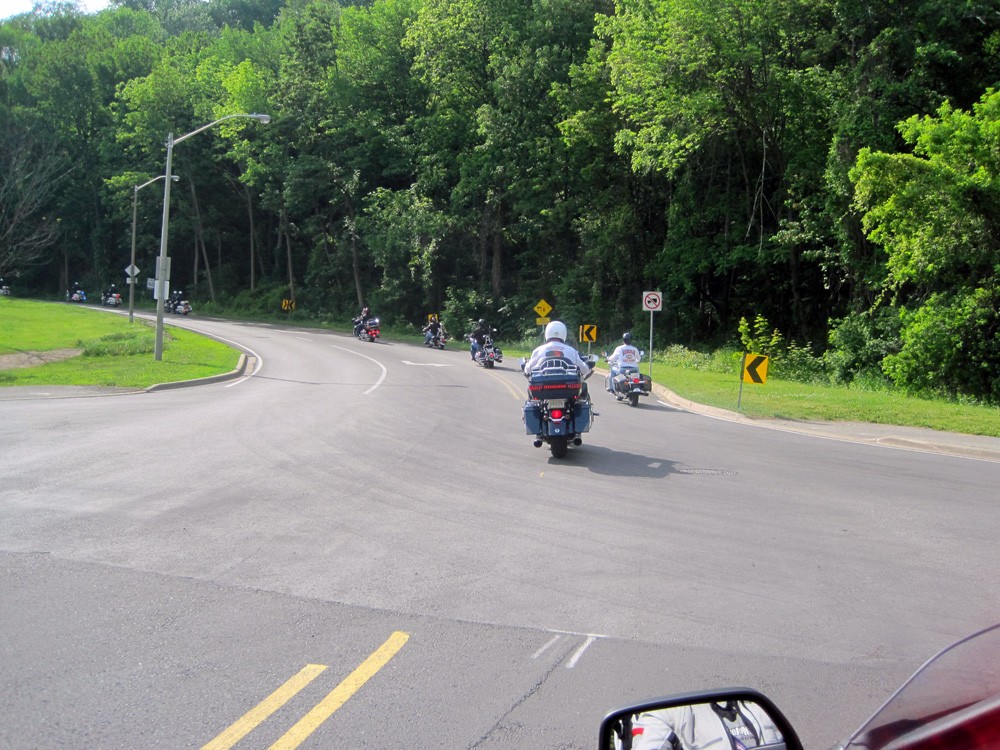 First leg of the Ride along the Niagara Parkway was police escorted. How nice!

Before departing from the Legion in Niagara-on-the-Lake, we listened to some touching speeches from key speakers including the Ride Captain, Dr. Ian Brown, a Niagara area urologist. I met Damian Parrent, one of the co-chairs of the ride, before suiting up and heading out for the ride at 9 am sharp. The first leg was a police-escorted ride along the quiet and scenic Niagara Parkway. The cops even shut down all traffic right through The Falls so we didn’t have to put a foot down. It was very cool and the scenery, of course, was impressive. Oh, and no rain clouds in sight. 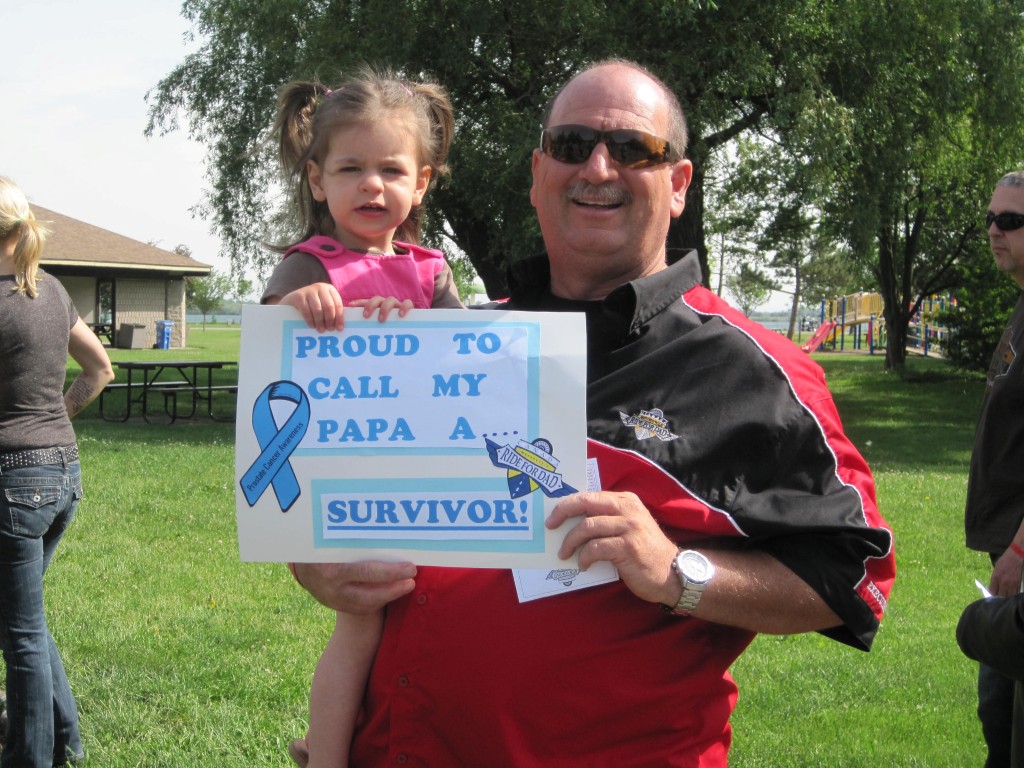 Top fundraiser and prostate cancer survivor Ken Smith was greeted by his daughter at the first check point.

After the first stop we were basically on our own – just follow the signs and hope you end up at the next location! A poker run was part of the Ride, so everybody got a card at each of the five stops. Departing the first stop I got hooked up with another rider named Doug who was riding with his 11-year-old son Evan on the back of his Suzuki Volusia. He knew the area well, so we stuck with them for the rest of the trip. The Ride basically looped 175 km from Niagara-on-the-Lake along the Niagara River all the way down to Fort Erie before cutting west and north along some quiet highways and quaint country roads, past wineries, farms and forests, rarely touching ‘city’ pavement and offering some fantastic riding before looping back east toward Niagara Falls. 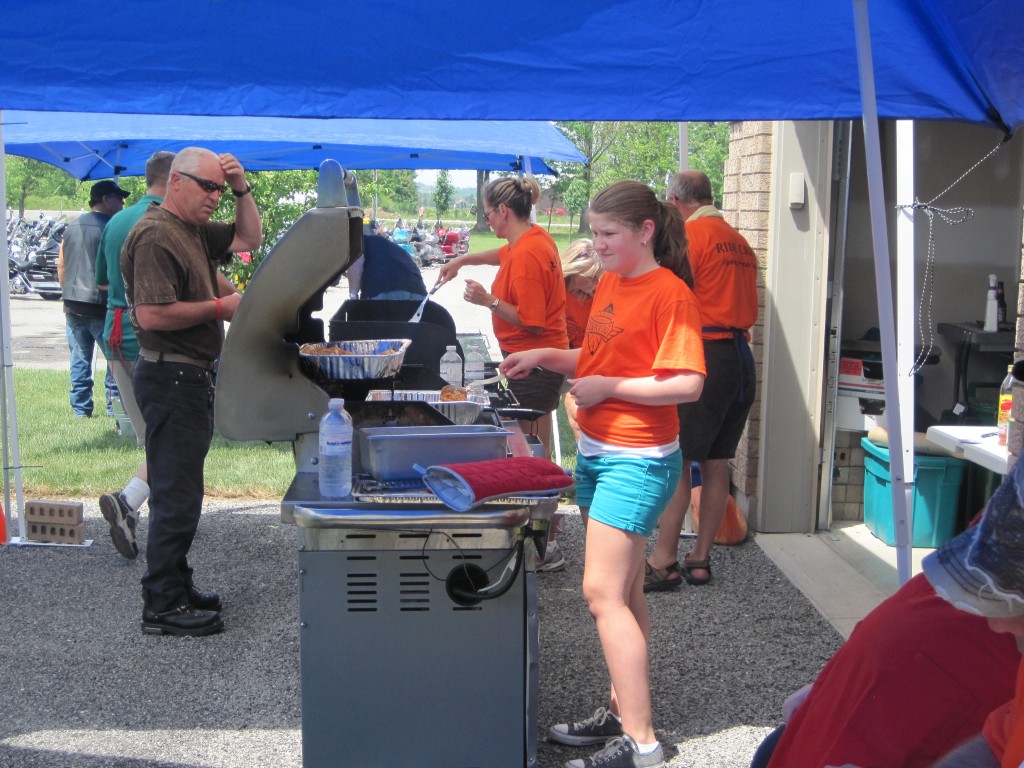 BBQ’d burgers were on the menu for lunch!

Free burgers were served at lunch, people mixed and mingled and looked at each others’ bikes, including the Honda F6B that served as a very worthy steed for our trip (the wife raved about the comfort and I couldn’t keep the cruiser guys at bay!). Just before our second-last stop, at an ice cream shop (good call, organizers!) a fighter jet took off from a small local airstrip and zoomed over us, just a few hundred feet above our heads!  I still don’t know why (must have been an airshow somewhere), but it was a major highlight of the trip! I’m an airshow nut, so it was quite the rush. 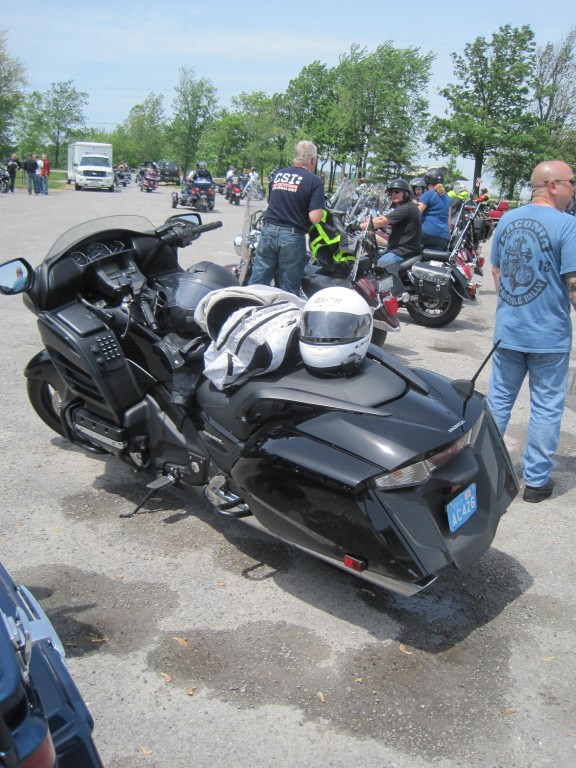 We finished up around 3:30 after starting the ride at 9am, greeted at a pavilion at Club Italia outside of Niagara Falls by a live band and a spaghetti and meatball dinner. And guess what? No rain the whole ride. Tammy and I celebrated the trip and got our picture taken with the ‘We Did It’ sign… 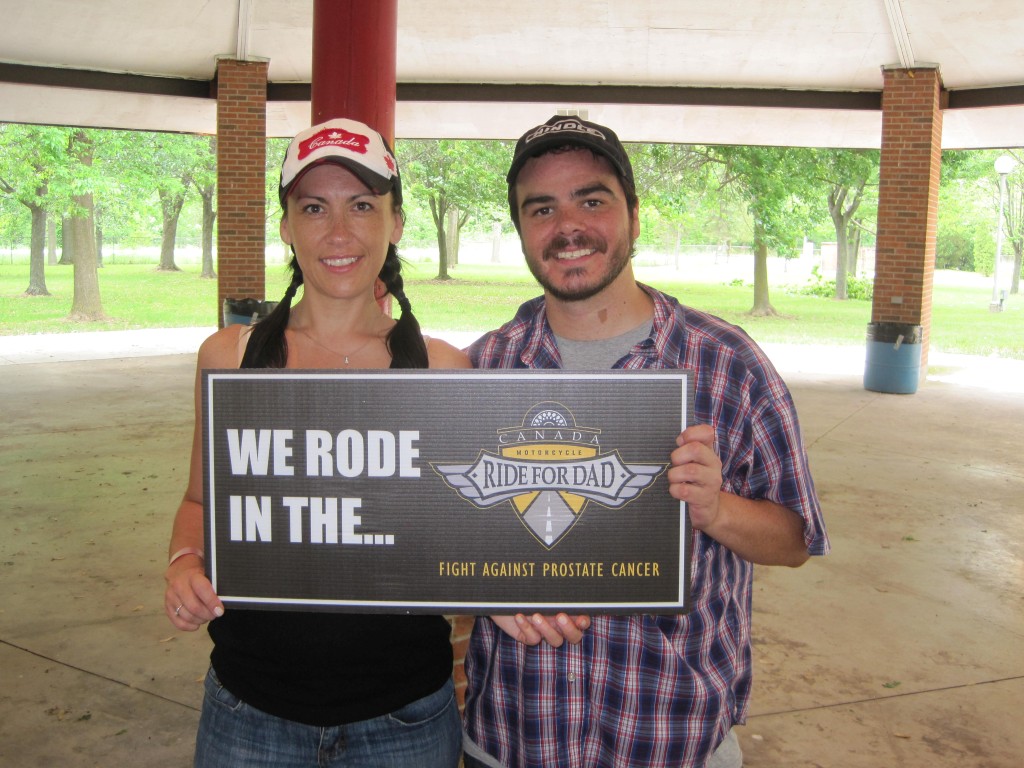 Graeme and Tammy celebrate. “We did it!”

Closing remarks, thanks and speeches were next, with the key point being that us guys need to get our dang prostates checked and spread the word! We need to stop being so ‘macho’! Women join together in the fight against breast cancer and find strength in numbers… it’s time for men to be more open about prostate cancer and to help each other avoid this disease that is diagnosed by such an easy test.

The Niagara Ride For Dad raised over $20,000, putting this chapter over $90,000 since the first ride five years ago. Ride co-chair Joe Maggiolo announced the top three fundraisers for the Niagara ride… coming in at #3 – YOURS TRULY! (With huge help from Inside Motorcycles, of course, who matched my first $1,000 raised.) My grand total was $2,525. HUGE THANKS to all of you that pledged me, even those who have never met me! It really means a lot. 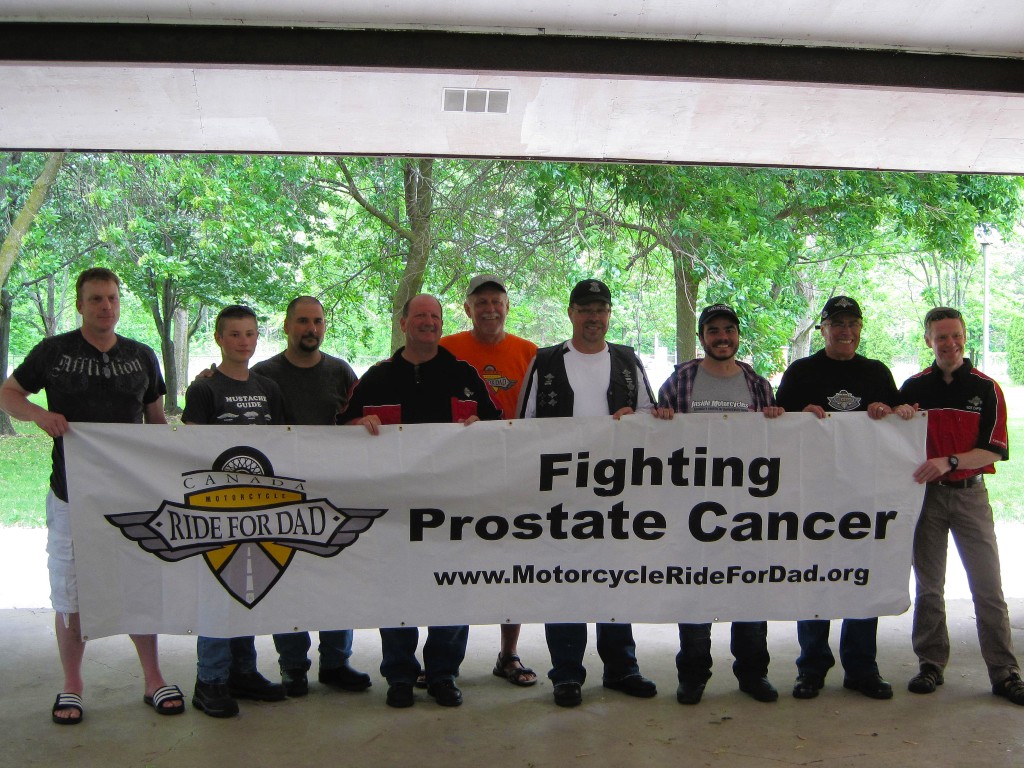 Top fundraisers (including your editor), event organizers and poker run winners pose for a photo op!

With an eye to the sky, we decided to start back toward Toronto rather than stick around to enjoy the area… and wouldn’t ya know it, about 15 minutes into our return home, it started to rain. We found shelter while it passed, and the rest of the ride was a smooth, dry trip home along Lake Ontario.

There were many stories along the way of people who had lost loved ones, friends and riding buddies to this disease. It was a humbling experience. I’m fortunate to know two survivors, so I know how important it is to continue raising funds and awareness for the fight against prostate cancer. Go get checked. Make sure your dad, uncle, brother and coworkers get checked. Let’s rally together to beat this thing! 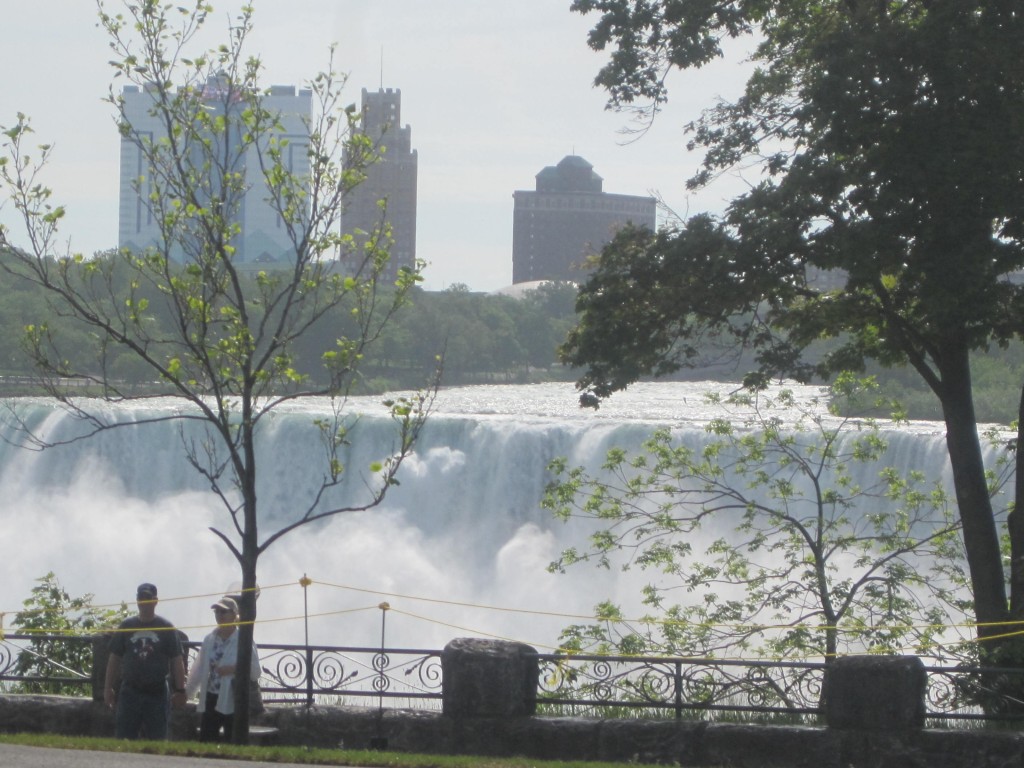 Riding past the majestic Falls with a police escort… very cool! 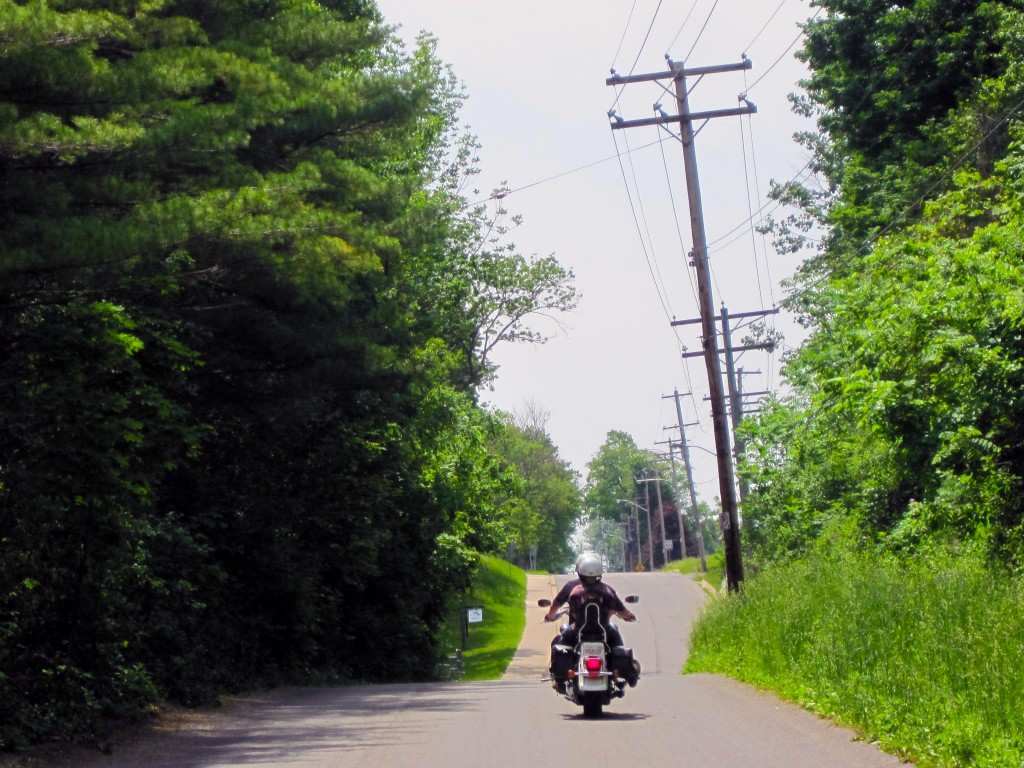 Following Doug and his son Evan through the quiet, hilly country roads of the Niagara region. 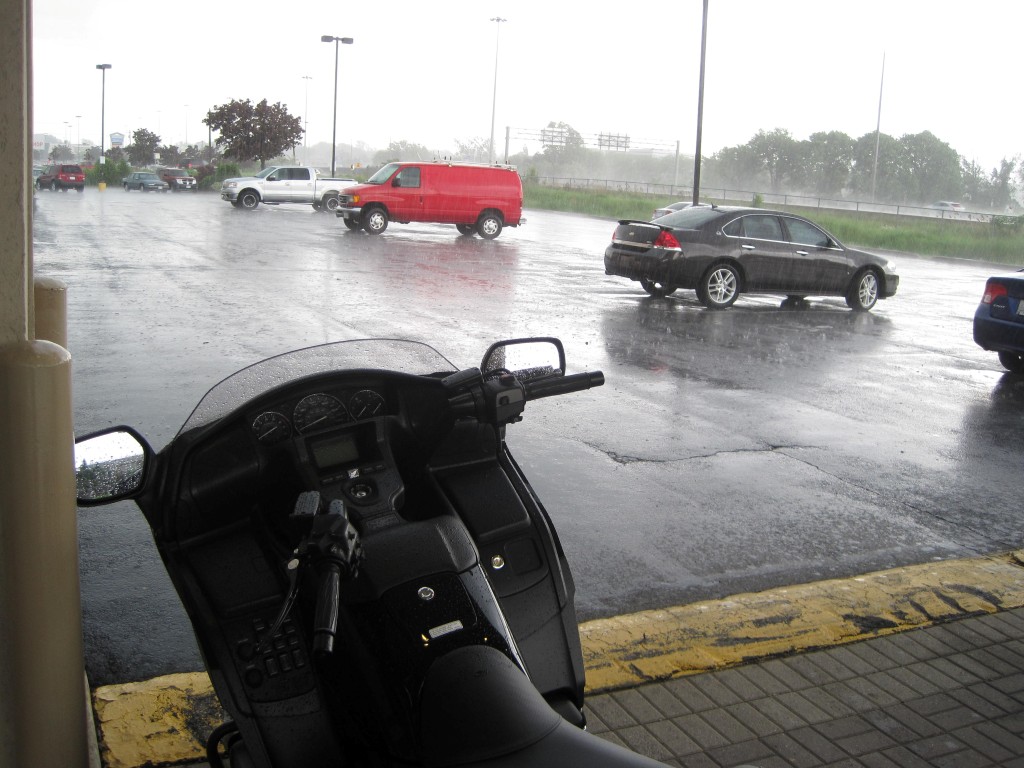 Within 15 minutes of leaving the Ride For Dad, the rain came in! When you can, it’s best to just wait these things out!