For the first time in its history, the Pro Bike & Sled Series presented by Wiseco Performance Products has declared co-champions in its Point Award Series Standings. 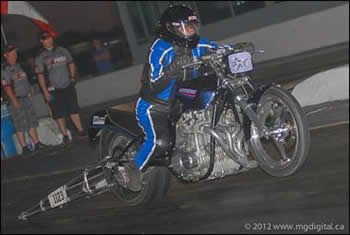 Winning the title for 2012 are Pro Bike rider Ted Glinny and Pro Sled racer Chris Bondi, both with 971 points. This season marked the third in PBSS racing, which features motorcycles and snowmobiles racing in sportsman-style drag racing action.

Bondi, from Aurora, Ontario, started with the PBSS in 2011, and rides a supercharged 1200 cc Ski-Doo Renegade. His ride is capable of mid eight-second times at about 145 mph down the quarter-mile.

He qualified for all six PBSS events in 2012, and started out the season with a final round appearance after qualifying sixth in the field. Bondi followed that up with two semi-final round appearances later in the year. Tania and Jake McFadden offer crew support while sponsorship is provided by Motovan Corporation, HRP, Pro Stock Inc., OTSFF, VP Race Fuels and Bondi Engines Inc.

Riding his Pro Bike Kawasaki in the mid eight-second range at speeds around 155 mph, Glinny also qualified for all the events he entered in 2012 although he skipped one event. He made it to two final rounds and one semifinal and when the final points were tallied, he was in a dead tie with Bondi for championship honours.

Glinny, who has raced for several decades, rode his 1425 cc Ninja for 2012 on the Glinnja Team. Crew chief for the effort is Harry Manovich, with Jay and Nicole Glinny and Marty K making up the rest of the team.

Graeme Jones / This email address is being protected from spambots. You need JavaScript enabled to view it.

When Brett McCormick agreed to travel to Bahrain to test the 2020 Ducati Panigale V4 S he left Canada with visions of desert heat, but Mother Nature can be fickle,…